The aim of this study was to report our experience with the Soave pull-through procedure combined with a single-incision laparoscopic approach to treat Hirschsprung's disease after one-stage colostomy, in comparison with an open approach. A total of 37 children diagnosed with Hirschsprung's Disease after one-stage colostomy were evaluated in this study from June 2008 to May 2014. Nineteen patients treated with the Soave pull-through combined with an open approach from June 2008 to May 2011 were in Group 1, and 18 patients treated with a single-incision (abdominal wall colostomal) laparoscopic Soave pull-through approach from June 2011 to June 2014 were in Group 2. The preoperative data, operative details, and follow-up outcomes were compared in the two groups to determine the advantages of the single-incision laparoscopic approach. Statistical comparison was made with unpaired t-tests, χ2 tests and Fisher’s exact test, with P value less than 0.05 considered significant. The two groups had similar preoperative patient data to ensure comparability. The operative time in Group 2 was similar to that in Group 1, and all Group 2 cases underwent a single-incision laparoscopic approach. The postoperative time to feeding and the hospital stay after surgery were shorter in Group 2, which showed less blood loss, fewer complications, and less incidental injury. All patients were followed up for 6-12 months, and outcomes were better in Group 2. Compared to open surgery, the laparoscopic singleincision abdominal wall colostomal approach had many benefits and was effective in treatment of Hirschsprung's disease after one-stage colostomy.

Hirschsprung's disease (HSCR) is characterized by the absence of autonomic ganglion cells in the terminal bowel, and is a relatively common cause of intestinal obstruction in newborns [1]. The incidence of HSCR is estimated to be 1 in 5,000 live births [2]. Enterocolitis is the most common cause of significant morbidity and death in HSCR [3-5]. When a neonate with HSCR has a colon perforation or enterocolitis, initial life-saving intestinal fistula surgery must be performed [6]. A second stage radical operation must contend with abdominal cavity adhesions, and a pull-through laparotomy is commonly performed [7,8].

The surgical technique for HSCR has been modified several times in the last twenty years. From a total transanal, endorectal pull-through (TERPT) to a laparoscopy-assisted approach, the need to reduce surgical trauma has been a concern [9-11]. Single-incision laparoscopic surgery (SILS) has gained acceptance as a method to reduce visible abdominal scars [2,12-14]. In this article, we introduce abdominal wall colostomal SILS and provide a comprehensive and detailed comparison with the open procedure to evaluate the advantages of this minimally invasive laparoscopic surgery.

From June 2008 to May 2011, 19 children with HSCR, with a mean age of 5.8 months (range 3.1 to 7.3 months), were treated following colostomy with an open-assisted Soave pull-through approach; 14 were boys (73.7%) and 5 were girls (26.3%). All cases were diagnosed by pathological examination after the one-stage colostomy at a mean age of 20.8 days (range 9 to 27 days); 11 long-type cases (lesion involving descending or transverse colon) were treated with transverse colostomy (57.9%), and 8 common-type cases (lesion involving sigmoid colon) were treated with sigmoidostomy (42.1%), based on Chinese guidelines. These patients were in Group 1. This study was conducted in accordance with the declaration of Helsinki.

This study was conducted with approval from the Ethics Committee of Shandong University. Written informed consent was obtained from all participants’ guardians.

From June 2011 to May 2014, 18 children with HSCR, with a mean age of 6.2 months (range 3.6 to 8.1 months), were treated following colostomy with a SILS-assisted Soave pull-through approach; 13 were boys (72.2%) and 5 were girls (27.8%). The mean age at one-stage colostomy was 21.9 days (range 8 to 29 days); 11 long-type cases were treated with transverse colostomy (61.1%), and 7 common-type cases were treated with sigmoidostomy (38.9%). These patients were in Group 2. The detailed data of all patients including nutritional status and body mass index (BMI) are shown in Table 1; there were no statistical differences between the two groups.

Table 1. The comparison of preoperative data between Laparoscopy and Open group (mean ± SD).

Adequate bowel preparation was necessary and operative position was as for abdominal-perineal resection. The abdominal operation was performed first, and the colostoma was isolated, closed, and then replaced in the abdomen, using a 2 cm, fusiform incision around the colostoma. Then, a modification of a transanal Soave pull-through procedure for HSCR was performed as previously described [10], unless there was a problem with the transanal pull-through because of difficult mesocolon ligation. Then, laparoscopy was used to assist the procedure on the isolated colon instead of traditional open surgery. A TriPort was inserted at the abdominal wall colostoma (Figures 1A and 1B), through which 5-mm laparoscopic instruments were inserted into the abdominal cavity, and carbon dioxide was insufflated at a pressure of 8-10 mmHg. An ultrasonic scalpel was used to isolate the interenteric and abdominal adhesions (Figures 1C and 1D), mesocolon, and splenocolic ligament (Figure 1E), to enable tensionless, transanal colon pull-through (Figure 1F). The modified Soave pull-through procedure could then be completed. 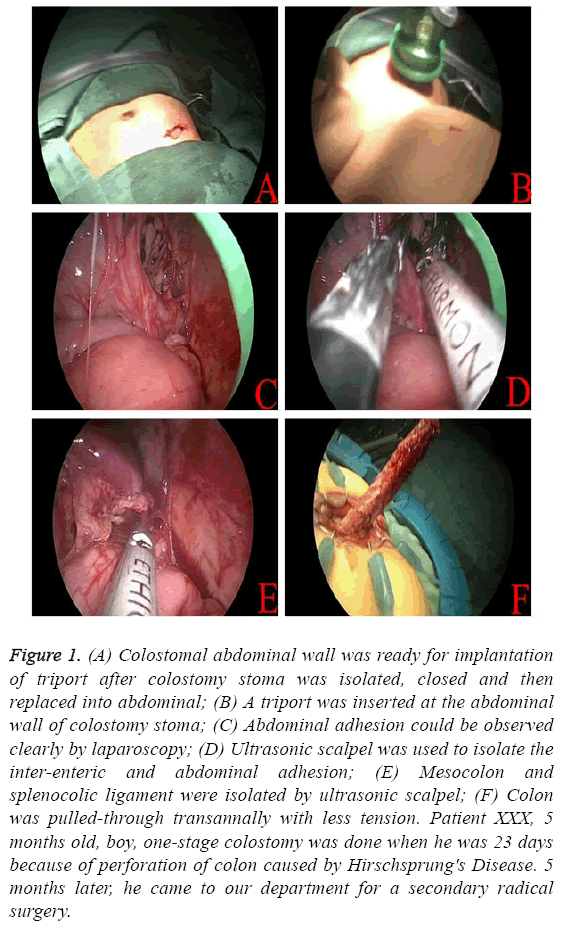 Figure 1: (A) Colostomal abdominal wall was ready for implantation of triport after colostomy stoma was isolated, closed and then replaced into abdominal; (B) A triport was inserted at the abdominal wall of colostomy stoma; (C) Abdominal adhesion could be observed clearly by laparoscopy; (D) Ultrasonic scalpel was used to isolate the inter-enteric and abdominal adhesion; (E) Mesocolon and splenocolic ligament were isolated by ultrasonic scalpel; (F) Colon was pulled-through transannally with less tension. Patient XXX, 5 months old, boy, one-stage colostomy was done when he was 23 days because of perforation of colon caused by Hirschsprung's Disease. 5 months later, he came to our department for a secondary radical surgery.

Table 2. The comparison of operative and hospitalized data between Laparoscopy and Open group (mean ± SD).

The results of follow-up in the outpatient clinic for 6-12 months are shown in Table 3. Although there were no differences in the rate of prolapse and diarrhea between the two groups (0 vs. 0; 1/18, 5.56% vs. 1/19, 5.26%), the rates of recurrence, intestinal obstruction, retraction, constipation, and diaper rash were all lower in Group 2 than in Group 1.

Table 3. The comparison of followed-up data (6-12months) between Laparoscopy and Open group.

TERPT for HSCR has been popular, and includes the standard Swenson, Duhamel, and Soave procedures, as well as various modified procedures [15-17]. The most common type of HSCR has been treated by primary radical repair; for most long-type and some common-type HSCR cases in newborns with enterocolitis or colonic perforation, one-stage life-saving colostomy was necessary, followed by two-stage radical repair 3-6 months after colostomy, once nutritional status was improved. Since laparoscopic surgical treatment for HSCR was first described by Georgeson [19,20], the primary laparoscopic-assisted, endorectal colon pull-through has been the standard treatment for HSCR [20,21]. The desire to reduce scarring and pain and decrease recovery time and the time to return to routine activity has gained increasing attention, and has led to more single-incision laparoscopic procedures (SILS) [22,23].

Just as trans-colostomy SILS combined with Soave TERPT was used to treat HSCR patients after one-stage colostomy in this article, scarring can be reduced and abdominal wound infection can be prevented by placing a TriPort in the abdominal wall colostoma instead of performing open surgery with associated significant trauma. In addition to the cosmetic benefit, laparoscopy offers excellent intraoperative visualization of small structures and great surgical accuracy [24,25]; incidental injury due to lysis of adhesions, intestinal loop perforation, or splenic injury can be effectively avoided, which can reduce intraoperative blood loss and the rate of postoperative intestinal obstruction caused by recurrent adhesions [21,26]. As a result, postoperative feeding resumed earlier and hospitalization days were reduced.