Comparison of the effects of three commercial media on preimplantation mouse embryo development and morphological grading.

Embryo culture is a vital procedure in Assisted Reproductive Technologies (ART). Assessment of embryonic morphology and development is of importance in the selection of embryos for transfer. Survivability of embryos in culture media depends on nutrient supply to maintain embryonic growth at every stage of preimplantation development. The objective of this study was to observe the effect of M16, HTF and KSOM commercial media on preimplantation embryonic development and morphological grading. Female mice were superovulated with pregnant mare’s serum gonadotropin (PMSG) followed by human chorionic gonadotropin (hCG) 48 h later. The oviducts were flushed at 23 -25 h post-hCG using M2 medium. Embryos with two pro-nuclei were selected for culture. A total of 240 embryos were equally divided for culture in M16, HTF and KSOM media. Embryonic development and morphological grading were observed at 48, 67, 74, 93 and 11 h post-hCG until the hatched blastocyst stage. Significantly higher numbers of blastocysts was observed in HTF and KSOM cultures at 93 h post-hCG, compared to M16 culture (p<0.05). HTF showed a significantly higher number of Grade B4 blastocyst (p<0.05), while KSOM showed a significantly higher number of Grade B1 blastocysts (p<0.05), compared to M16. Morphological quality appeared to be stage dependant. M16 medium showed significantly higher number of 8-cell stage (n=62) compared to HTF (p= 0.026). Our observations suggested that for ICR mouse embryos, M16 is effective in promoting precompaction stage development until the 8-cell stage, while HTF and KSOM were more effective in promoting post-compaction stage development, hence producing more blastocysts.

In vitro fertilization (IVF) and culture (IVC) have been performed in murine models to study the physiology and molecular events of reproductive and developmental processes. Murine embryos are commonly used to study and monitor culture conditions, techniques and instrumentation used in human IVF due to similarities in their nutritional requirements and developmental milestones with human embryos. The optimal conditions of IVC on mouse embryos depend on a number of parameters. The composition of the culture medium used is an important determinant [1,2]. Optimization of IVC is considered a fundamental requirement in ART in order to maintain embryo viability before transfer.

Assessment of embryonic development is a useful platform to select the most viable embryos for transfer. However, the survivability of embryos in culture media depends on several factors, including sufficient nutrient supply to maintain the growth of embryos at every stage of development. Various studies have been conducted to evaluate culture systems with respect to developmental competence and embryo grading in human [3, 4] and mice [5,6]. Preimplantation stages of murine embryonic development are normally characterized by morphology of the developing cells and specific alteration in gene transcription, followed by messenger ribonucleic acid (mRNA) and protein synthesis [7]. The primary goal in culturing preimplantation embryos is to allow growth of embryos in artificial environment in order to assist in the development of embryos. Media such as M16, HTF and KSOM used in this study contain similar metabolites, such as glucose, phosphate, magnesium sulphate, glutamine, pyruvate and EDTA constituent differences, as shown in Table 1. 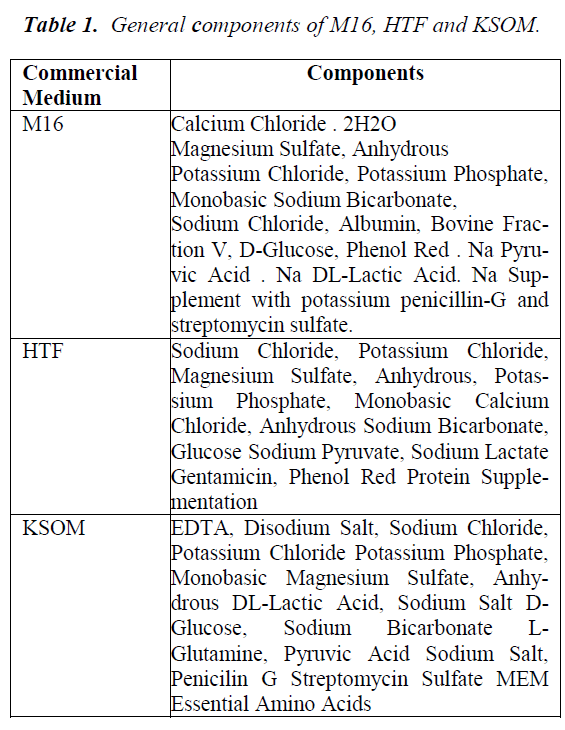 M16 medium is known as a conventional culture medium and has been used in the routine culture of mouse embryos. It is a modified Krebs-Ringer bicarbonate solution and is very similar to Whitten’s medium [8]. In 1956, Whitten [9] found that by adding glucose to this medium mouse embryos developed to the 8-cell stage. Previous studies by Whitten [9], Brinster et al. [10]. and Biggers et al. [11]. showed that the addition of several other metabolites into the culture medium was essential. Lactate allowed embryos to grow from 2-cell to the blastocyst stage in the presence of glucose, while pyruvate supported the transition from 1- to 2-cell [9-11]. Another study showed that the utilization of glucose was low at the beginning of embryonic development; however, it increased during compaction and blastocyst stages [12]. This provided evidence that pyruvate and lactate support early mouse development, whereas glucose supports development of embryos at the post-compaction stages.

Kalium (K+) Simplex Optimized Medium (KSOM) medium was developed after the M16 medium. It was modified from Simplex Optimized Medium (SOM), which was originally developed to overcome the 2-cell block in CF1 mouse zygotes [13]. The addition of K+ allowed CF1 zygotes to develop into blastocysts [14]. The concentrations of NaCl and KCl were also increased in KSOM [15,14]. KSOM was optimized using all 9 components found in M16 medium, plus glutamine and in EDTA [15]. The addition of the nonessential amino acid, glutamine into KSOM was found to stimulate the development of 8-cell hamster embryos to the blastocyst stage [16]. Thus, glutamine could be metabolized by embryos and stimulate the embryonic development. The addition of Eagle’s non-essential amino acids and glutamine was found to significantly improve development to the blastocyst stage and increase the rate of compaction [17,18]. Addition of ethylenediaminetetraacetic acid (EDTA) into the culture media blocked the process of glycolysis, which prevented glucose utilization in early cleavage embryos [19].

Human tubal fluid (HTF) medium consists of balanced salt solutions with added carbohydrates, glucose, pyruvate and lactate. This medium is based on similar concentration of potassium in the reproductive tract [3]. HTF however, does not contain EDTA as a chelating agent to inhibit glycolysis.

All procedures on the animals were approved by UiTM Animal Care & Use Committee (Approval code ACUC- 7/11).

Twenty three (8 to 10 week-old) female ICR mice weighing 35-40 g were used as embryo donors. Mice were kept at temperatures within 22+2°C, with a light/dark cycle of 12:12 h. Animals were provided food pellets and reverse osmosis water ad libitum. For superovulation, the female mice were given 10 IU of pregnant mare serum gonadotrophin (PMSG), followed by 10 IU human chorionic gonadotropin (hCG) intraperitoneally, 48 h apart. Females were then cohabited with fertile ICR males at a ratio of 1:1. Pregnabt/plugged embryo donors were euthanized at 23-25 hrs post-HCG, by cervical dislocation, for the collection of embryos. Fallopian tubes were excised and embryos were flushed using M2 medium, under a dissecting microscope (Leica Zoom 2000, Japan). Only 2 pronuclear- stage (2PN) embryos were selected for subsequent IVC.

A total of 240 embryos were randomly divided into 3 groups of 80 embryos each and were subjected to IVC in M16, HTF or KSOM media. Embryos were cultured in a 35-mm culture dish (Nunclon, Roskilde, Denmark) filled with 100 μl media of either M16 (Catalogue no: M7292, Sigma-Aldrich, USA), HTF (Catalogue no: 90125, Irvine- Scientific, USA) or KSOM (Catalogue no: MR-107-D, Merck Millipore, Germany) supplemented with 5% BSA, overlaid with mineral oil (Catalogue no: M5310, Sigma- Aldrich, USA).

The cultures were maintained in a humidified carbon dioxide incubator containing 5% CO2 and 95% air at 37°C for 5 consecutive days. Embryos were observed under the reverse phase light microscope (Leica IRB, Japan), and inverted microscope (Olympus 1X81 SF-3, Japan) for morphological grading, as well as developmental observation.

Morphological grading was scored based on the appearance of the cells, rate of growth and degree of fragmentation at various time points (Table 2) after hCG administration. Morphological grading for 2-cell, 8-cell and 16- cell was done based on scores by Veeck [20] (Table 3). For the blastocyst stage, scoring was performed based on Gardner et al. [21] (Table 4).

Embryonic development was also observed according to the time points described in Table 2. Each time point represented a different stage of preimplantation development i.e. 2-cell (48 h), 8-cell (67 h), 16-cell (74 h) and blastocyst stage (93 h). The number of hatching blastocysts at 117 h (Day 5) of IVC was recorded.

The development of preimplantation embryos in HTF KSOM and M16 media were recorded at 48, 67, 74, 93 and 117 h. Statistical analysis of development in HTF vs KSOM showed no significant differences at all observational time points (Figure 1). 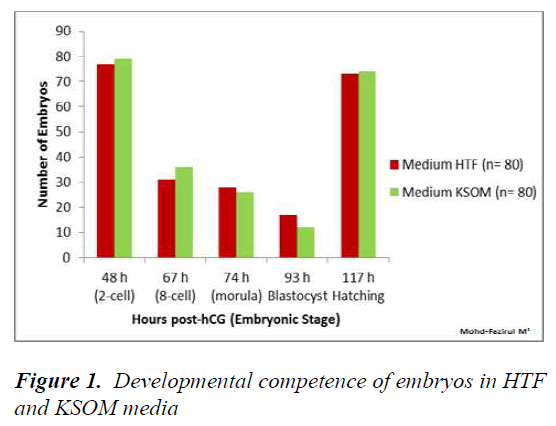 Figure 1: Developmental competence of embryos in HTF and KSOM media

Figure 2 shows that the number of embryos that developed into blastocyst (93 h post-hCG) and hatched blastocysts was significantly higher in HTF, compared to in M16 medium (p = 0.016). 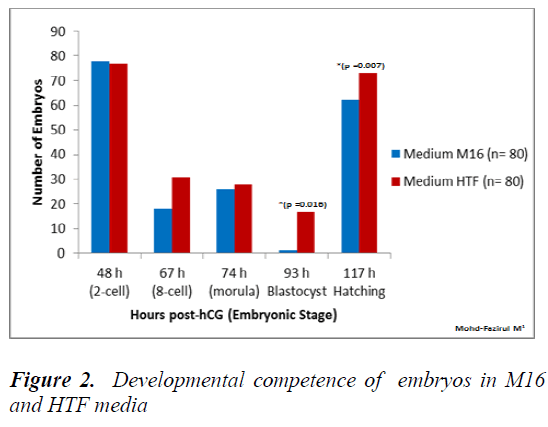 Figure 2: Developmental competence of embryos in M16 and HTF media 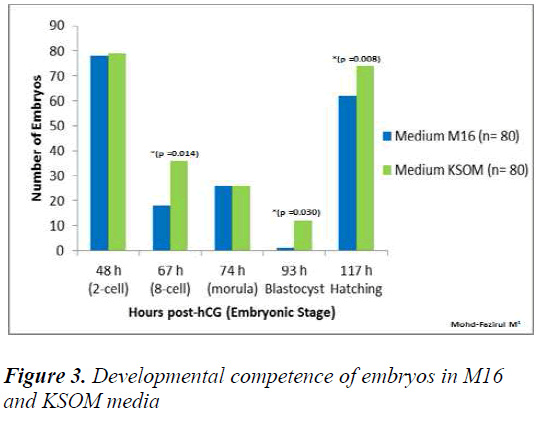 Figure 3: Developmental competence of embryos in M16 and KSOM media 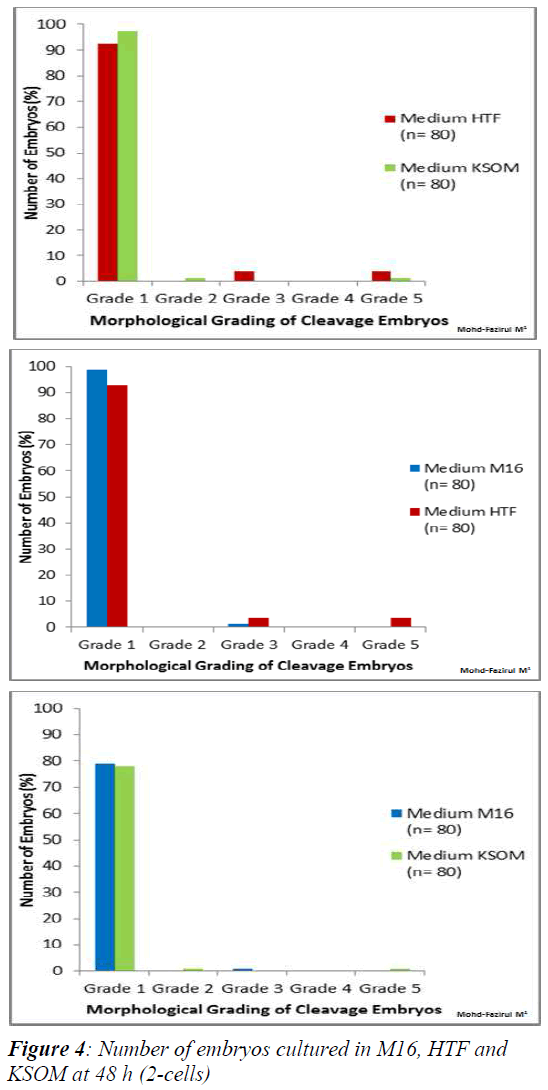 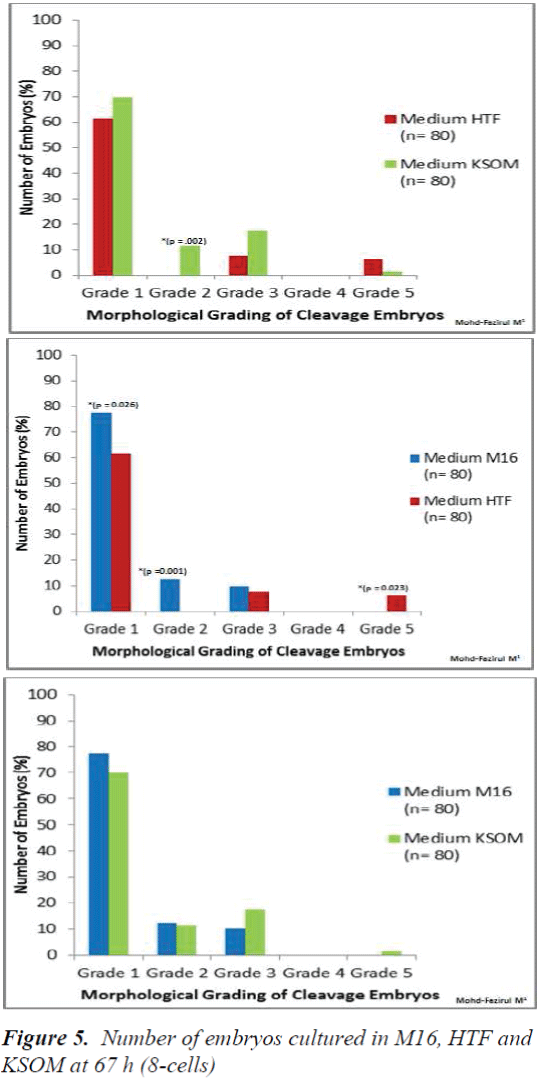 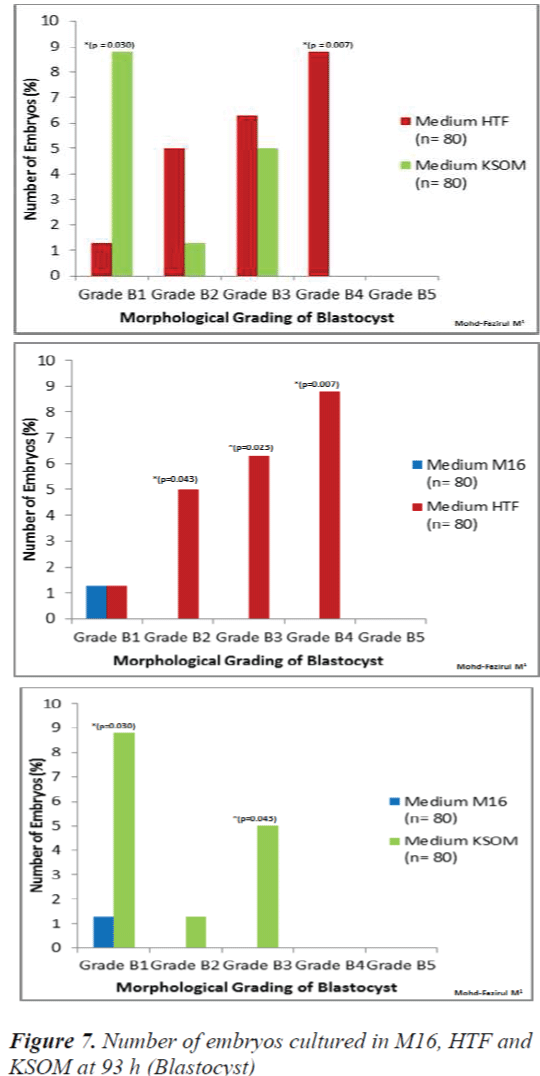 Figure 7: Number of embryos cultured in M16, HTF and KSOM at 93 h (Blastocyst) 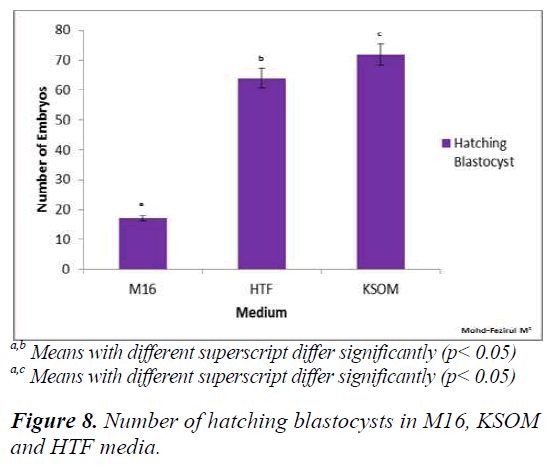 The present study demonstrated that HTF and KSOM media were superior compared to M16 medium in supporting the development of preimplantation embryos at the higher rates (>90%), up to the hatching blastocyst stage (Figure 8). Improved development to the blastocyst stage might be due to the lowering of glucose and phosphate to more optimum levels in the media. Due to higher energy requirement in the post-compaction stage glucose consumption increased to support blastocyst development (22-24). Studies carried out on glucose and pyruvate consumption and lactate production in single human embryos showed that more lactate was produced than could be accounted by glucose uptake (25, 26), suggesting that the remaining was derived from endogenous sources, such as glycogen.

At the pre-compaction stages, the use of M16 medium appeared to be beneficial for development and produced embryos with better morphology, with the highest number of Grade 1 embryos compared to HTF and KSOM. Various studies have been conducted to evaluate culture systems with respect to developmental competence and embryo grading in human [3,4] and mice [5,6]. In this study, KSOM produced the highest percentage of hatching blastocysts (92.5%), followed by HTF medium (91.3%). Although there were no significant differences between KSOM and HTF, the number of hatching blastocyst was significantly different in both KSOM vs M16 (p = 0.008) and HTF vs M16 (p = 0.007). Both KSOM and HTF media appeared to provide better support for embryonic development and blastocyst differentiation until hatching. This could be due to the lower osmolarities of KSOM (255 mOsM) and HTF (284 mOsM) compared to M16 (290 mOsM). Media with lower osmolality were reported to allow embryos to complete in vitro development better than medium with higher osmolality [27]. Although not addressed in this study, other variations in culture parameters such as type of culture overlay, oxygen and glucose tension, culture drop volume and BSA supplement might also affect the embryonic morphogenesis and developmental competence [28]. When comparing cleavage and blastocyst grading, it was shown that blastocyst morphological grading would provide higher predictive values for implantation [29,30].

Within the first 48 h (2-cell), the number of 2-PN embryos that divided into 2-cells was not significantly different between all three media (Figures 1- 3). This suggested that KSOM, HTF and M16 media adequately provided appropriate ratios of energy sources in the form of pyruvate the first zygotic cleavage (Figure 1).

At 67 h post-hCG, our study showed significantly higher number of 8-cell in KSOM compared to M16 (p = 0.014). The poorer development in M16 could be attributed differences in lactate and glucose content, with KSOM. Both of these components were required in development from 8-cell to blastocyst stage. Conaghan et al. [31] showed that the presence of glucose was necessary for human embryos after the 8- cell stage. Consumption of glucose was minimal (8 pmol/embryo/hour) in the first 48 h but increased significantly (p < 0.001) after the fourth (20 pmol/embryo/ hour) and fifth culture days (34 pmol/ embryo/ hour). Another study on murine embryos showed that better results were obtained on development when glucose was added into the medium after embryonic genome activation [32]. Meanwhile, at 74 h post hCG, there were no significant differences in the developmental competence of embryos between all media (Figures 1, 2 and 3). Each medium appeared to provide sufficient nutrient uptake during this stage of embryonic development. In contrast, results at 93 h showed that significantly higher numbers of blastocysts developed in HTF and KSOM, compared to M16. With reference to embryonic developmental competence, our findings showed that HTF and KSOM produced almost similar results. Embry Embryonic development in the two media was significantly better than in M16 medium. Although a comparison between HTF and M16 medium did not show a difference in early preimplantation embryonic development, there was a marked increase in development at the blastocyst stage in HTF medium (Figure 8). HTF and KSOM appeared to be superior to M16 with respect to the number of hatched blastocysts produced. Along the same line, HTF and KSOM were found to have significantly better morphological grading at the blastocyst stage, compared to M16.