Comparison of the diagnostic values in rheumatoid arthritis: Anti-CCP antibodies and other serological tests.

Rheumatoid arthritis (RA) is an inflammatory autoimmune disease. Early diagnosis, early and aggressive treatment are the best means of avoiding joint destruction, organ damage and disability. This prospective study was carried out to determine the relationship between RA and laboratory tests used in the diagnosis of RA. 199 patients (20 males, 179 females; mean age: 50.6 years) that were suspected to be RA were included in the study. Anti-CCP, RF, ESR, and CRP tests were performed for all patients. The patients were divided two groups named RA and non-RA according to American College of Rheumatology criteria. Of the all patients, 96(48.2%) tested as positive for anti-CCP antibodies. Of the RA patients, 93 (68.9%) were positive for anti-CCP antibodies. The positivity of anti-CCP antibodies was 4.7% (3/64) for non-RA. Sensitivity, specificity, PPV, and NPV in diagnosis of RA for anti- CCP respectively were 0.69, 0.95, 0.97, and 0.59, and for high positive anti-CCP respectively were 0.55, 1.00, 1.00, and 0.52, and for RF respectively were 0.59, 0.92, 0.94, and 0.52, and for high positive RF respectively were 0.54, 0.98, 0.99, and 0.54, and for CRP respectively were 0.73, 0.78, 0.87, and 0.57, and for ESR respectively were 0.84, 0.30, 0.72, and 0.46. Sensitivity for the diagnosis of RA could be further increased by a combination of the anti-CCP and RF tests. There was a positive correlation between anti-CCP and RF positivity (?=0.59537), anti-CCP and RF high positivity (?=0.537364), ESR and CRP (?=0.426544). It is concluded that performing anti-CCP test in the diagnosis of RA could be beneficial since it has high specificity and positive predictive value. If this test was performed together with RF, it may be more beneficial.

Rheumatoid arthritis (RA) is an inflammatory autoimmune disease that affects joints primarily leading pain, stiffness and difficulty in movements. Cartilages, synovial cells, and some systems of the body are affected with autoimmunity and inflammatory processes of RA [1-4]. Early diagnosis and aggressive treatment are the best means of avoiding joint destruction, organ damage and disability [2,3,5,6].

Most of the chronic diseases have a gold standard tests for diagnosis. There is no such similar standard laboratory test for the diagnosis of RA. The classification criteria to define RA that is used internationally was defined by the American College of Rheumatology (ACR) in 1987 [7].

New criteria for rheumatoid arthritis classification were introduced in 2010 [8].

Citrulline-binding autoantibodies in RA patients was discovered by Nienhuis et al. in 1964, as an autoantibody able to bind to perinuclear granules in normal human buccal mucosa cells, and was named antiperinuclear factor [9]. In 1979, Young et al. reported that RA sera contained antibodies that reacted to the keratinized layer of epithelial cell.

These were called antikeratin antibodies, and were only found in RA patients [10]. High diagnostic specificity and sensitivity for first anti-CCP test associated with these antibodies were revealed by Boekel et al. in 2002 [11]. Anti- CCP2 test which demonstrates a higher sensitivity for RA was developed by Van Venrooij et al [12].

This prospective study was carried out to determine the relationship between RA and laboratory tests used in the diagnosis of RA.

This study was carried out in patients clinically considered to be RA who were admitted at the physical medicine and rehabilitation (PMR) clinics of Meram Medical School Hospital and Konya Training and Research Hospital between January 2008 and December 2010 prospectively. The study protocol was approved by the Ethical Committee of Meram Medical School.

A total of 199 patients which consist of 20 males and 179 females were between 20 to 76 years old; who were suspected to be RA were included in the study (mean age: 50.6 years). All patients were examined, and radiologic and serological tests were performed. Clinical and other findings were assessed according to 1987 ACR criteria until September 2010 and the 2010 ACR/EULAR criteria after September 2010. The patients were grouped into two groups (RA group, non- RA group) according to these criteria. The distribution of patients with RA and non-RA were demonstrated in Table I. 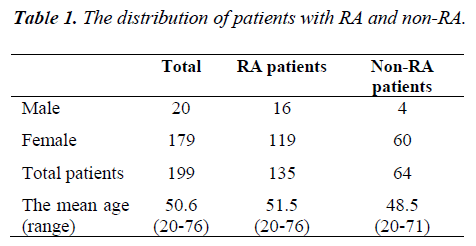 Table 1: The distribution of patients with RA and non-RA.

Statistical analysis was made by the Statistical Package for the Social Sciences (SPSS Inc., Chicago, Illinois, USA, version 17.0) for Windows software program. The relationship between the RA diagnosis and laboratory serological tests, the correlation of RF/Anti-CCP and ESR/CRP was investigated by analyzing the phi correlation coefficient.

During the study, 199 patients who had rheumatologic complaints and were suspected to be RA, were evaluated by using ACR criteria in 1987 and ACR/EULAR criteria in 2010. The mean age of these patients was 50.6 yrs. 179 (89.9%) of patient were female and 20 (10.1%) were male. 135 (67.8%) of the patients were diagnosed RA, and 64 (32.2%) patients were non-RA according to these criteria. Clinical signs and laboratory results of all patients were re-evaluated according to the 2010 ACR/EULAR criteria after September 2010 and all patients diagnosed RA were confirmed as RA while the others were confirmed as non-RA. 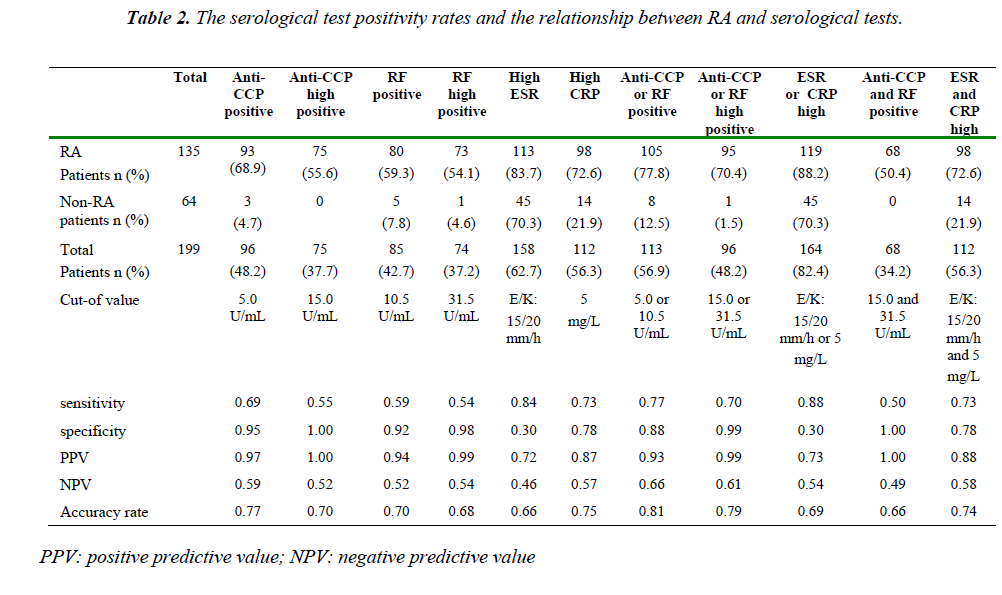 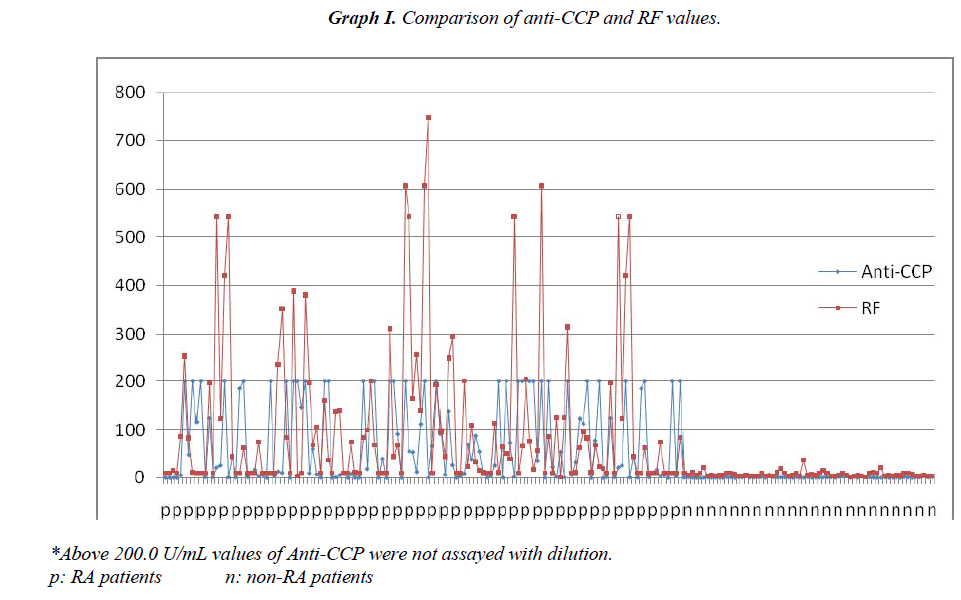 Graph I: Comparison of anti-CCP and RF values. 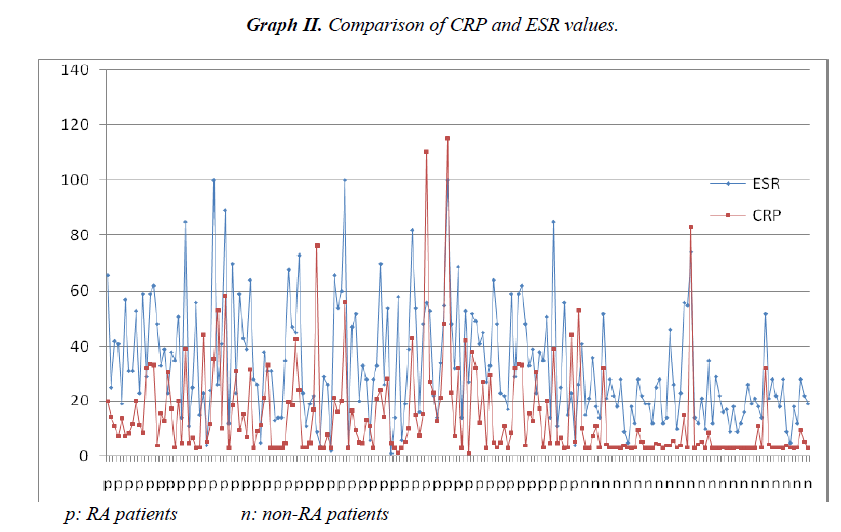 Detection of IgM RF in serum was the only recommended laboratory marker within the 1987 RA diagnostic criteria of ACR [7]. Assessment of anti-CCP, RF, ESR and CRP in the serum was included in the ACR/EULAR RA classification criteria in 2010 [8]. Several studies have questioned the importance of anti-CCP antibody testing in distinguishing RA from other inflammatory diseases [13]. A standardized diagnostic evaluation study was performed on 524 RA patients with newly referred early arthritis. The strongest association between persistent or/and erosive arthritis and anti-CCP positivity was found [14]. Anti-CCP assays were done on sera from 242 RA patients who were followed up regularly for 3 years by Kastbom et al [15]. There was a positive correlation between anti-CCP and higher ESR, CRP. Also there was a positive correlation between RF and increased ESR and CRP [15]. Anti-CCP and RF positivities were closely associated in a study [16]. In this study fifty percent of the patients were both anti-CCP and RF positive. Anti-CCP was positive in sera from 208 of 379 patients (55%), and RF in sera from 235 of 374 patients (63%) [16]. Anti- CCP was found positive in 71/120 (59%) in RA patients’ sera by Koivula et al. [17]. Kim et al. performed a study to determine of seropositivity for RF and anti-CCP in unaffected first-degree relatives of RA patients (FDR) and RA patients. Seropositivity for RF and anti-CCP respectively was detected in 14.4% and 5.0% in FDR patients, and was detected 97,8% and 98,5% for RA patients and revealed significant positive correlations between RF and anti-CCP [18]. The anti-CCP was found positive in 68.7% of RA patients, and was found positive in 30.4% of RF negative patients in the performed study by Deveci et al.

Bizzaro et al. reported that a consistent number of patients (n = 79, 41.4%) were positive for RF and/or anti-CCP at baseline in RA patients. In the study it is reported that among the RF-positive subjects, 67.1% displayed high RF titers, while in the group of anti-CCP2-positive subjects, an even higher percentage (83.8%) displayed high anti- CCP2 levels in the serum [22].

It is concluded that performing anti-CCP test in the diagnosis of RA could be beneficial since it has high specificity and positive predictive value. If this test was performed together with RF, it may be more beneficial.