Objective: The purpose of this study was to compare the apically extruded debris during endodontic retreatment of teeth with open apices using hand instruments and rotary instruments with continuous rotation and reciprocation.

Methodology: Forty-five single-rooted maxillary incisors and canines were used. The root tips were dissected and #1 Gates Glidden burs were allowed to protrude 1 mm beyond the apex. After root canal shaping and filling using AH Plus and gutta-percha, the teeth were randomly divided into 3 groups (n=15). Removal of filling was performed as follows: Group 1: ProTaper Universal-Retreatment files using continuous rotation + ProTaper Universal files Group 2: K-type hand files Group 3: Reciproc files using the reciprocating motion. The extruded debris was collected in glass vials. The weight of the collecting vials was measured before and after instrumentation using a microbalance and the difference was recorded as the amount of extruded debris. The data were statistically analysed using Kruskall Wallis and Bonferroni corrected Mann Whitney U test.

Post treatment disease or failure of root canal treatment is an undesirable condition which is specifically associated with the persistence of microorganisms in the root canal system [1]. Endodontic retreatment is a conservative therapeutic means to eradicate periapical disease and retain natural dentition without further surgical intervention. The major purpose of root canal retreatment is to regain access to the apical foramen following the complete removal of previous root canal filling material [2]. However; root canal filling materials, irrigants, solvents, dentinal chips, necrotic debris and microorganisms may be pushed into periapical tissues during this procedure. These extruded elements may result in post-operative inflammation and pain as well as delay of healing [3,4]. During retreatment procedures, it is essential that previous gutta-percha and root canal sealer are completely removed from dentinal walls while controlling the amount of apical extrusion at the same time [5,6].

Immature teeth with open apices are a specific group of teeth which require meticulous care during endodontic treatment as these teeth are susceptible to apical irritation and extrusion due to their wider apical diameters. A survey of the literature shows that although there are many studies evaluating apically extruded debris during endodontic treatment as well as retreatment, there are yet no studies that specifically focus on immature teeth with respect to apical extrusion. The aim of this study was to compare the apically extruded debris during retreatment procedures in teeth with open apices using instruments with continuous rotation, reciprocation and hand instruments.

The minimum sample size for the mean extrusion parameter (Δ=10.36) was statistically analysed (power=0.80, α=0.05) and it was determined that the minimum number for each group should be 15. Forty-five extracted human maxillary central incisors and canines were used. Teeth were left in 2.5% sodium hypochlorite (Wizard, Rehber Kimya San, Istanbul, Turkey) for 1 hour to remove tissue remnants on root surfaces and later subjected to ultrasonic cleaning. Bucco-lingual and mesio-distal radiographs were taken to ensure single and straight root canals. Curvature degrees of roots were confirmed by using the method of Schneider [7]. Only samples having curvatures between 0° and 10° were included in the study.

A #15 K-file was inserted into root canals until it was seen through the apical foremen under dental operation microscope to control apical patency. Teeth lengths were adjusted to 19 ± 1 mm by shortening coronally and apically using a separating tip. For the simulation of teeth with with open apices, #1 Gates Glidden burs (size 50). (Dentsply Maillefer, Ballaigues, Switzerland) were introduced in the root canals and were allowed to protrude 1 mm beyond the apex. The initial preparation of each specimen was done using Protaper Universal Series (Dentsply Maillefer, Ballaigues, Switzerland) until an F5 file. 2 ml of 5.25 % sodium hypochlorite (Wizard, Rehber Kimya San,;Istanbul, Turkey) was used after each instrument and a final irrigation was made using distilled water. After root canals were dried with paper points (Diadent Group International,Korea), root filling was performed using AH Plus (DeTrey Dentsply, Konstanz, Germany) and gutta-percha points (Diadent Group International,Korea) by the cold lateral compaction technique. All samples were kept at 37°C and 100% humidity for two weeks to allow setting of the sealer.

The experimental model to collect debris was modified from the methodology described by Myers and Montgomery [8]. The filled teeth were forced into rubber stoppers and fixed using a paraffin film (Parafilm M, Chicago, USA) to provide a hermetic seal. Later, the rubber stoppers with experimental teeth were secured onto the tops of glass vials which served as collectors for the apically extruded material during retreatment procedure. Paraffin films were placed between the rubber stopper and glass vials to confirm a hermetic closure. A plastic insulin syringe needle was placed through the rubber stoppers to equalize the air pressure between glass vials and outer environment. An analytical balance with an accuracy of 0.0004 g was used to measure the initial weights of vials before the placement of rubber stoppers containing the experimental teeth (weight 1, W1). Specimens were divided into three randomized groups. Retreatment procedure was carried out using the following systems in each group.

Group 3 (Reciprocating instruments): Reciproc system (VDW, Munich, Germany) was utilized for retreatment procedure using R25, R40 and R50 mounted on a VDW silver motor (VDW, Munich, Germany) in ‘‘Reciproc all’’ mode. All filling removal protocols were performed by the same operator. Irrigation during filling removal was carried out using a total of 12 ml of bi-distilled water delivered using a side-vented needle (Hawe irrigation probe, Kerr, Bioggio, Switzerland). After root canal filling removal procedures, rubber stoppers were removed and gutta-percha particles adhered to the apices were rinsed with 1 ml bi-distilled water and allowed to pour into the glass vials. The glass vials with the extruded material were placed in dry air sterilizer at 160°C for 2 hours to evaporate the irrigation solution. Extruded debris in dry glass vials were weighed using the same procedure as the initial measurements (Weight 2, W2). All weight measurements were repeated 3 times and an average was taken and recorded as the final measurement. The weight of extruded filling debris was calculated by subtracting the weight of empty vials from the vials containing the extruded material (W2-W1).

Table 1: The mean amount of debris extrusion associated with each group. 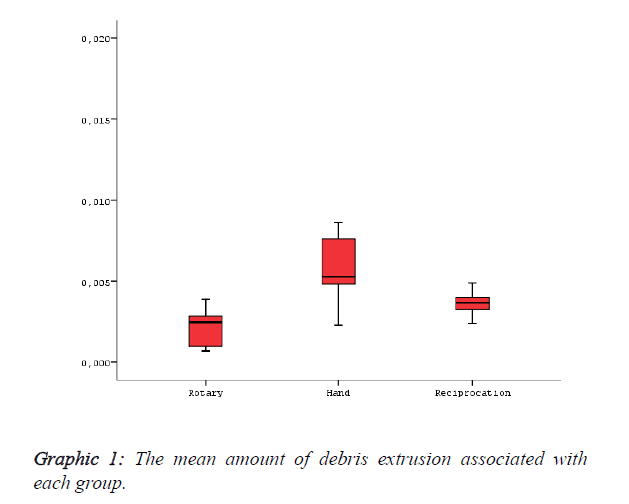 Graphic 1: The mean amount of debris extrusion associated with each group.

Apical extrusion of debris is one of the significant causes of post-operative pain and flare-ups during endodontic treatment [9-11]. There is general agreement in the literature that apical extrusion of debris is an inevitable phenomenon regardless of the shaping methodology used [12-14]. It has been indicated that although qualitative properties of the extruded material cannot be controlled by the practitioner; quantity of debris may be controlled to a certain extent by selecting techniques which provide a gradual approach to the apical terminus [15]. Reciprocating motion is a recently emerging trend in the field of endodontic and has been compared with rotational movement in some studies in terms of extrusion [12,13,16,17]. In a study by Deus et al. [17] Protaper F2 instrument was used in both rotational and reciprocal movements. No statistical difference was found between the groups in terms of apical extrusion. In another report, Silva et al. [13] showed that a rotational system produced significantly more debris than reciprocating systems. They interpreted their results with the differences in instrument designs and movement kinematics associated with each system. On the other hand, consistent with the results of the present study, Bürklein et al. [16] reported that reciprocating files extruded significantly more debris compared to rotary files. The reason for their finding was attributed to reciprocal in-out motion which might have the potential to push debris apically while rotation improves coronal transportation of debris by acting as screw conveyor.

Many studies have been performed concerning apical extrusion; however, to our knowledge there is yet no study comparing Protaper Universal Retreatment System, Reciproc and K Hand files in simulated immature teeth during retreatment. In the present study, the amount of extrusion in Ni-Ti instruments using continuous rotation was found to be significantly lower compared to Ni-Ti instruments using reciprocation and K-file hand instruments in teeth with open apices. The reason of lower extrusion in rotational movement compared to other systems may be attributed to coronal transportation of debris in rotational movement which limits the amount of apically extruded material. A modification made during the experiment was the selection of crown-down movement in the hand instrumentation group in order to provide standardization with respect to apical approach. It was presumed that such a methodology should also be preferred with hand instruments when treating immature teeth due to the higher possibility of apical extrusion of material in these types of teeth with open apices. A variety of methods have been used so far for the evaluation of apical extrusion. The methodology described by Myers and Montgomery [8] was used in the present study due to its simplicity and practicality as well as its use by many previous studies concerning extrusion. Despite its limitations, this methodology allowed to make an easy comparison between different techniques. However; different study designs should also be used in future research to consolidate the findings and draw general conclusions.

The apical portions were standardized with no.1 Gates Glidden drills to simulate a less severe underdevelopment comparable to a Cvek’s Stage 4 [18]. The main reason for such an approach was to standardize the final retreatment instrument size at no. 50 without the necessity of further instrumentation with hand-instruments. It was presumed that the continuation of instrumentation with hand files and incorporating a hybrid technique would jeopardize standardization in case larger apical diameters were created. On the other hand, underdevelopment of roots is not limited to Stage 4 and more severe cases are likely to be encountered in clinical practice. It is yet doubtful whether root canal retreatment would be encountered in clinical situations for Stage 1-3 cases as other methodologies such as vital pulp therapies might be selected to manage such situations. Nevertheless, the usage of relatively less severe underdeveloped teeth can be considered as one of the limitations of the present investigation. In many studies, distilled or bi-distilled water was used as irrigation solution instead of EDTA or NaOCl to prevent crystallization which might have adverse effects on the overall results [12,16,17]. Similarly, bi-distilled water was used as irrigation solution in the present study to prevent the formation of remnants of irrigants.

While transferring the present results to the clinical situation, it should be considered that an in vitro set up was used in the present study with the apex suspended in the air without any back pressure. Under in vivo conditions; however; granulation tissue or periapical tissues exert some degree of resistance against the material propelled apically [6,8]. Some researchers suggested to use floral foam to simulate resistance of periapical tissues [19,20]. But foam may absorb some debris and irrigant when using as barrier, so no attempt was made in the present study to simulate periapical resistance. On the other hand, when teeth with open apices are concerned, the practitioner is faced with the challenge of preventing extrusion in an environment which is highly exposed to periapical tissues. The difficulty is augmented with the fact that majority of teeth with open apices, specifically those requiring retreatment are also associated with periapical disease and bone destruction, further reducing apical resistance. In such cases, selection of the suitable instrumentation technique might be more crucial and necessitate more attention. Another issue that is equally important is the type of previous root filling which might have a very significant impact on the quality of the retreatment procedure. Only one type of filling material was used in the present study, however the clinician may be confronted with many different situations with different types of filling material that necessitate to be removed. Extra caution should be exercised when dealing with materials which may have a higher potential to disintegrate and pushed periapically during instrumentation. Within the limitations of this study, the rotational method provided less debris extrusion compared to the other techniques used. Further research is warranted with different techniques as well as hybrid methodologies combining different techniques in order to reach a conclusion about the safest method to be advocated in the retreatment of challenging immature teeth.