Aim: To compare different types of synthetic mesh in terms of adherence of microorganisms and induction of inflammation, and to determine the mesh type associated with the lowest level of infection in an infected environment.

Conclusions: Polypropylene and ePTFE performed well; the E. coli colonisation rates were low in a rat model of infection. Larger studies are warranted to explore both the short- and long-term utilities of various mesh types placed under infected conditions.

Hernia mesh repair of the anterior abdominal wall is regarded as a clean surgery with an incidence of postoperative mesh infection of approximately 1-2% [2,3]. Wang et al. [4] reported that the rates of surgical-site infections (SSIs), including wound infections, cellulitis, and mesh-related infections, were 3.92-5.1% in patients who were or were not prescribed antibiotic prophylaxis and the meta-analysis of Mazaki et al. [5] reported infection rates of 3.0-6.0%. However, a recent study found that the SSI rate was as high as 13% in patients who underwent elective open mesh-plug hernia repair and did not take any prophylactic antibiotics [6]. In another study on 41 patients who underwent single-stage repair of grade 3 and 4 hernias with biological mesh reinforcement, the overall postoperative wound infection rate was as high as 15% [7]. In light of such data, SSI remains an important problem after hernia repair by mesh insertion.

Staphylococcus aureus and Escherichia coli are the principal microorganisms that infect meshes after surgery; these species can form biofilms on mesh surfaces [8]. Bacterial growth and slime production are influenced by the morphological features of surgical meshes and their hydrophobicity [9]. In fact, synthetic meshes are not recommended for use in patients with active infections because of the high risk of mesh infection [10].

The study was conducted in the Experimental Medicine and Investigation Centre of University Medical School. Local Ethics Committee approval was obtained (approval number 2011/22).

Sixty Sprague-Dawley rats (250-320 g) were used. The animals were housed under conditions of constant light (12 h light/dark cycles) and temperature, and received a complete diet of rat food and water ad libitum throughout the entire study. The animals were randomly divided into 6 groups, each of which contained 10 rats, as follows:

The animals were intraperitoneally anaesthetised with 50 mg/kg ketamine (Ketalar Flacon, Parke-Davis/Eczaciba?i) and 10 mg/kg xylazin (Rompun, Bayer). After disinfection of the skin with 10% (w/v) povidone iodine (Betadine, Kavcuk Laboratory), a vertical incision 2 cm in length was made paravertebral to the right side. A sterile mesh platelet (2 × 2 cm) was implanted under the skin, muscle, and fascia layers. No antibiotic was administered before or during this procedure. A cannula was inserted lateral to the incision and the end was placed onto the mesh; no fixation material was employed. The skin was closed by stapling. One millilitre (1.0 × 105 bacteria) of an E. coli (ATCC 25922) suspension was injected via the cannula, which was then removed, after which a spray dressing was applied.

The control group underwent identical paravertebral incision and dissection, but no mesh was inserted. This was followed by cannulation lateral to the incision, injection of bacteria, removal of the cannula, and application of a dressing as described above. Seventy-two hours later, all of the animals were intraperitoneally anaesthetised with 50 mg/kg ketamine and 10 mg/kg xylazine. After skin disinfection with 10% (w/v) povidone iodine, the skin clips were removed, the wounds were excised, and the meshes were collected and placed in tubes containing 3 mL sterile saline. The tubes were vortexed and the bacterial suspensions were serially diluted in saline, followed by culture on sheep agar plates for 24 h. Tissue samples (1 cm long) were obtained from the muscle and soft tissue surrounding the meshes (using sterile instruments), fixed in 10% (v/v) buffered formalin, and conventionally processed for histology. Because the control group had no mesh, tissue samples were obtained after standard anaesthesia and sterilisation.

All of the microbiological evaluations were performed by the same microbiologist who was singly blinded to the test group. Colony-forming units (cfus) were counted if possible; if the colonies were too dense to count, the colony count was considered >300 cfu/mL.

Specimens were examined by light microscopy (LM) after fixation in 10% (v/v) formalin, embedding in paraffin, and staining of sections with haematoxylin and eosin (H and E). All of the pathological evaluations were performed by the same pathologist who was singly blinded to the test group.

We explored the severity of inflammation. Polymorphonuclear cell migration, mononuclear cell migration, oedema, vasodilation, haemostasis, and increased vascularisation were scored as absent (-), mild (+), moderate (++), or severe (+++); whereas margination and transmigration were scored as absent (-) or present (+). The maximum inflammation score was 20.

The lowest histopathological scores were evident in Groups VI and II, and the highest score was observed in Group I as shown in Table 1. Upon binary comparison, the statistical significance level was corrected to P<0.0083. In terms of tissue inflammation scores, the polypropylene and Proceed mesh groups had significantly higher levels of inflammation than the controls and HI-TEX mesh group as shown in Table 2.

Table 2. The binary comparison of groups in regards to the level of inflammation.

Notably, the best microbiological results were evident in Group I, and the poorest results were observed in Groups II and V as shown in Table 3. Upon binary comparisons, the statistical significance level was corrected to P<0.01. Upon microbiological evaluation, the HI-TEX and Proceed mesh groups yielded significantly higher numbers of E. coli colonies than the other groups as shown in Table 4.

Table 3. The colony counts of groups after 24 hours incubation in the incubator.

Table 4. The binary comparison of groups in regards to the microbiological results. 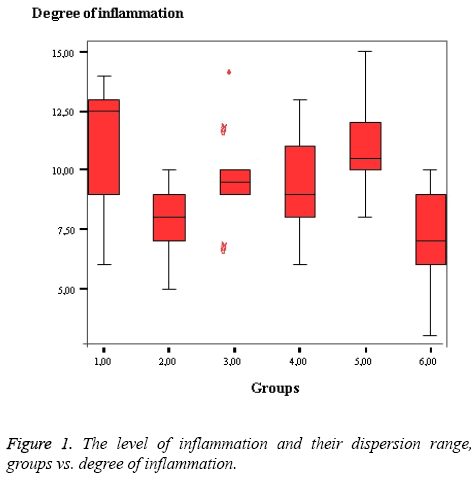 The dispersion ranges of microbiological results, group vs. colony counts (cfu) were figured as shown in Figure 2. 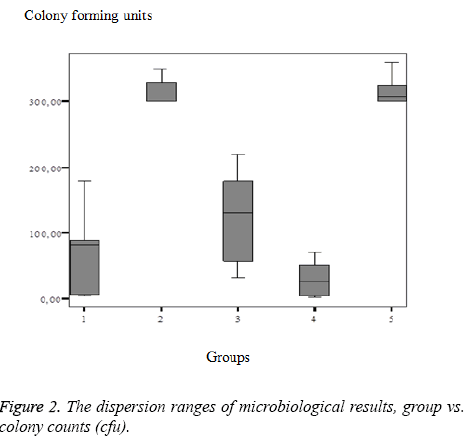 The use of synthetic meshes in infected areas is not advised, and data on the infection rates of synthetic meshes in such environments are limited. Because biological meshes are still not widely available, and since biological graft implantation may require new skills or technical expertise, we determined the infection rates of different types of synthetic mesh in an infected environment. Mesh infections are caused by biofilm formation on mesh surfaces. Apart from microbial properties, mesh structure and hydrophobicity influence the development of infection. Polypropylene is considered to be hydrophobic; this feature prevents initial colonisation by bacteria [11]. Moreover, the additional advantages of polypropylene are that the material is easily handled and quickly integrated. However, multifilament meshes with large surface areas are more prone to biofilm formation. The niches between fibres constitute an environment favourable to microbial development [9].

In a meta-analysis of data from 1,229 patients, the use of biological meshes for ventral hernia repair was shown to reduce the numbers of infectious wound complications compared to the use of synthetic meshes [12]. However, a recent single-centre 3-year outcomes trial evaluated the efficacy of a biological Inguinal Hernia Matrix (IHM; Cook Medical) compared to a polypropylene mesh. One hundred patients were included. No infection was found in any case, and no between-group difference was evident in terms of SSI [1]. Another study collected data on 41 patients who underwent removal of infected or exposed meshes, followed by singlestage reconstruction of the abdominal wall using a synthetic mesh (polypropylene). The short-term post-operative course was uneventful in 27 patients; 6 (14.6%) developed minor wound infections and were treated with dressings and antibiotics; 5 (12%) developed wound infections requiring debridement; and 1 required complete mesh removal. The cited authors concluded that standard polypropylene mesh could be used to place only grafts in infected surgical fields [13]. In the study by Souza et al. [14] in 100 patients, the use of uncoated mid-weight polypropylene mesh to re-in force midline ventral hernia repairs was not associated with increased rates of infection, fistula formation, or clinically significant adhesions.

PEU promotes the synthesis of high levels of both IL-6 and TNF-α [15]. Our PEU group (Group II) did not exhibit highlevel inflammation, but E. coli numbers were elevated. Thus, the polyethylene PET+PEU mesh may be unsuitable for use in infected environments. Although the mesh of Group V can be absorbed, high-level inflammation and high E. coli numbers were evident; thus, this mesh may be unsuitable for use in infected environments. Interestingly, and in line with our results, a prospective study comparing different mesh types found that inflammatory cell numbers were higher around polypropylene meshes compared to those containing both polypropylene and oxidised regenerated cellulose [16]. In another study, Parietene Composite® (polypropylene coated with absorbable collagen) and Omyramesh® (condensed polytetrafluoroethylene [cPTFE]) performed well in a contaminated environment [17]. Some study limitations must be mentioned. First, the time allowed for microbial adhesion, 72 h, was rather short, and we did not record late infections. Secondly we did not evaluate any biological mesh.

In conclusion, polypropylene and ePTFE meshes performed well. The E. coli colonisation rates were low in an infected rat model environment. Larger studies are warranted to explore the short- and long-term outcomes associated with the use of different mesh types under infected conditions.