Methods: This prospective randomized controlled double-blind study was conducted with 60 patients between the ages of 18-65 and ASA class I-II who were scheduled to undergo total abdominal hysterectomy. Patients who received a TAP block with ultrasound guidance prior to the surgical procedure were referred to as Group 1, the TAP block procedure after surgery made up Group 2. The rest and movement period Visual Analog Score (VAS), sedation score, nausea, vomiting and the need for additional analgesics were recorded at 2, 4, 6, 12 and 24 hours postoperatively.

Transversus Abdominis Plane (TAP) block is a useful strategy to reduce opioid consumption and support the management of postoperative pain [1,2]. Ultrasound (US) provides better localization and successful procedures. There are growing interest in the use of US with TAP block [2,3]. It has been reported that TAP block is safe and successful as an adjunct to analgesia outcome after various abdominal surgery [4-6]. TAP block characteristics can be associated with type of surgery, volume of local anaesthetic solution and timing of injection. Although optimal time for administration of the TAP block has been recommended preoperative period the in few publication, it can be performed either preoperatively or postoperatively [2,5]. Furthermore studies investigating the ideal period for TAP block administration are few. The objective of our study was to investigate, which period is more effective for administration of the TAP block using US guide on postoperative analgesia in patients undergoing total abdominal hysterectomy.

This prospective randomized double-blind study was conducted on 60 patients between the ages of 18-65 with ASA classes I-II who were scheduled to undergo total abdominal hysterectomy via a Pfannenstiel incision. The study was carried out between February 2013 and December 2013 at Turgut Ozal Medicine Center, Malatya, Turkey. This study was conducted after obtaining written consent from all patients and approval from the Inonu University Faculty of Medicine Ethics Committee, Malatya, Turkey. Patients were excluded if they had a history of allergy to the drugs used in the study protocol or had coagulation pathology, opioid tolerance, diabetes mellitus or hypertension. Patients were divided into two groups by using computer generated randomization. Patients who received an US guided TAP block prior to the surgical procedure (starting with the skin incision) following the induction of standard general anaesthesia allocated in Group 1, the patients who underwent the TAP block procedure after surgery (following skin suture and closure) allocated in Group 2. All patients received information about the Visual Analogue Scale (VAS) and the PCA (Patient Controlled Analgesia) device, which was implanted post operatively. Both patients and postoperative raters were blinded to the establishment of TAP block. Assignments of the study group maintained concealed until data were collected.

Premedication was not administered to any patient; Electrocardiography (ECG), Peripheral Oxygen Saturation (SpO2), and Non-invasive Blood Pressure (NIBP), Heart Rate (HR) and Bispectral Index (BIS) monitoring were performed. Induction of anaesthesia was accomplished with 1 μg/kg remifentanil, 2 mg/kg propofol and 0.1 mg/kg vecuronium; standard monitoring was performed. Maintenance of anaesthesia was continued with desflurane at a concentration of 6-8% in a mixture of 60% N2O+40% O2. All TAP blocks were performed by the same experienced anaesthetist. The TAP block was performed bilaterally with real-time US-guide using a 6-13 MHz linear probe (Esaote MyLab™Five, Italy), and 22 G 80 mm needle (Pajunk Sonoplex Nanoline Stim Cannula, Germany), in-plane technique. US probe was placed transversely in the flank between the anterior superior iliac spine and the costal margin. The external oblique muscle, the Internal Oblique Muscle (IOM) and Transversus Abdominis Muscle (TAM) were identified using US. Aspiration was conducted and the needle placement was verified by administering a 1 mL local anaesthetic test dose following the placement of the needle between IOM and TAM.

The local anaesthetic solution was injected after confirming with US that the solution was spreading in the plane between the IOM and the TAM. Two 20 ml syringes were prepared with a local anaesthetic concentration of 1.5 mg/kg 0.5% bupivacaine diluted to 40 mL with saline. These were administered to the left and right abdominal walls. IV acetaminophen 1000 mg was started to all patients before extubation. IV acetaminophen 1000 mg and oral ketorolac 30 mg every 6 hours combined with PCA morphine in both groups for multimodal analgesia. Patients were extubated after reversal of the muscle relaxant agent at the end of the operation and were taken to the Post-Anaesthesia Care Unit (PACU). The primary outcome measure in our study was 24 hours morphine consumption. Secondary outcomes were pain score at rest and on movement, sedation scores, nausea and vomiting. Following assessment of the VAS score, the first morphine dose was administered to patients with a VAS score of 3 or more via a PCA device. The PCA morphine protocol was as follows: 10 mL morphine sulphate (100 mg) was prepared with 90 mL saline. The PCA device with a lockout time of 15 minutes and an intermittent bolus of 2 mg was used.

Patients were observed in the PACU for at least 30 minutes and were transferred to the postsurgical ward when their vital signs stabilized. The rest period VAS, movement period VAS, sedation score, nausea and vomiting, and the need for additional analgesics and anti-emetics were recorded by researchers who were blinded to the study groups at 2, 4, 6, 12 and 24 hours post operatively. The VAS scores were: 0=no pain, 1, 2, 3, 4, 5, 6, 7, 8, 9, and 10=excruciating pain. Nausea was measured using a 4-point categorical scoring system (no nausea=0, mild=1, moderate=2, and severe=3). A dose of 10 mg metoclopramide was used for the treatment of nausea and vomiting. Sedation was measured using a 4-point sedation scale (0=awake, 1=prone to sleeping, 2=asleep, easy to rouse, and 3=deep sleep). In a previous study, effective post-operative analgesia of TAP block has been evaluated in patients undergoing abdominal surgery, a power analysis with an alpha error of 0.05 and a beta error of 0.20 revealed that a minimum of 14 patients were required in each group, when a 24 hours morphine requirement of 60 mg, with a standard deviation ± 10 mg was considered [7]. We decided to enrol 30 patients per group into the study to minimize any effect of data loss.

Statistical analyses were performed using the SPSS 16.0 statistical package. Data were expressed as the mean ± standard deviation (mean ± SD) or case (patient) frequency and percentage. The data related to normal distribution were confirmed by Shapiro-Wilk test. The independent samples t-test was used for the comparison of dual-group averages. The Yates corrected chi-square test was used for the comparison of need for additional analgesia and the comparison of side effects. Variables with p>0.05 were considered to have a normal distribution. Statistically, p<0.05 was regarded as significant and p<0.01 was regarded as highly significant.

A total of 60 patients were included in our study. The patients were similar in terms of demographic characteristics and duration of surgery (p>0.05), (Table 1). The 24 hours cumulative morphine consumption was significantly lower in Group 2 when compared with Group 1 (p<0.05), (Figure 1) 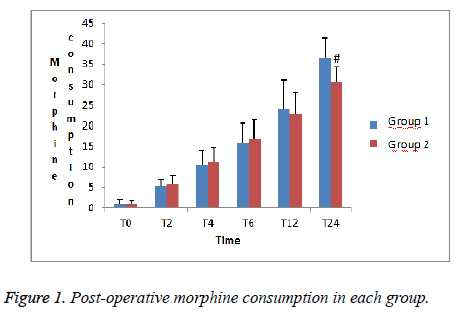 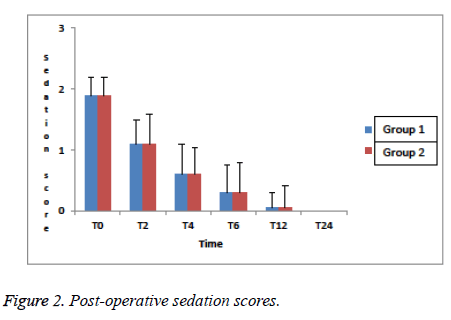 Our study found that post-operative administration of the US guided TAP block significantly reduced the 24 hours cumulative morphine consumption and decreased pain scores at 2 and 4 hours after surgery compared to preoperative administration of the block in total hysterectomy patients. The TAP block has been used for post-operative analgesia in wide variety of abdominal surgeries [7-20]. However, conflicting results have been reported regarding the benefits of the TAP block. Belavy et al. [14] showed that an US guided TAP block reduced morphine consumption as a component of a multimodal analgesic regimen in caesarean patients. The study of Costello et al. [21], which was a similar study conducted on the same patient group and using the same technique, suggested that a TAP block did not increase the quality of postoperative analgesia. Despite conflicting results, many studies have indicated that the TAP block is helpful in reducing post-operative pain and early morphine requirements [5,7,12,17]. Therefore, we preferred total abdominal hysterectomy patients receiving a lower abdominal incision for multimodal post-operative analgesic to obtain which period TAP block is more effective in the present study. 24 hours cumulative IV morphine consumption was reduced by an average of 23.71 mg in TAP block [6]. Griffiths et al. obtained 34 mg mean morphine usage with TAP block. Our 24 hours cumulative morphine consumption in both groups were similar the previous study [11].

It has been reported that post-operative VAS pain score at rest and on movement were reduced after TAP block [22-24]. The VAS pain scores (scale of 0-10) were between 1 and 4 [8,12,13,16]. In our study, similar VAS scores were recorded at rest and on movement at all interval period in the both groups. TAP block can be performed with the anatomical landmark technique, blind technique or US guided [25]. The blind technique, which is also known as the pop technique, carried out using palpation alone, is associated with serious complications [26-28]. US guidance can facilitate the movement of the needle and help to control the distribution of anaesthetics to appropriate regions. US can also improve the quality of the nerve block [3]. Moreover, US guidance reduces procedure time, decreases the number of attempts, accelerates block starting time and prevents gastrointestinal organ injury [3,29]. Considering these advantages, our study was carried out using US guidance without any complication. A study investigating the ideal period for TAP block showed that preoperative TAP was superior to reduce the severity of acute pain, analgesic usage, side-effects and incidence of pain in comparison with post-operative [30]. In the previous study TAP block has been performed with blind TAP block technique, however we used US guided TAP block.