The weakness of quadriceps and reduced activation has been identified as a major cause of activity limitations post Total knee replacement (TKR). There is a need to evaluate various available techniques in their effectiveness in improving quadriceps strength and minimizing functional limitations after total knee replacement. Objective of this study was to determine the effectiveness of strength training as compared to functional training in improving knee extension lag after first four weeks of Total Knee Replacement. This Randomized control trial was conducted at Ghurki trust teaching hospital, from June to December 2015.Patients with total knee replacement were selected consecutively and then randomly assigned to control group (n=33) and treatment group (n=31). Primary and secondary outcome measures were goniometry and Visual Analogue Scale (VAS) respectively. There was no significant difference found in knee extension Lag between the two groups (p-value>0.05). The mean Value for pain on visual analogue scale was 1.78 (SD=3.03) for control group and 1.33 (SD=3.32) for treatment group. The difference in mean scores for pain was significantly different for both groups (pvalue< 0.05). Both strength training and functional training were found equally effective in improving quadriceps lag, however, functional training exercises resulted in significant reduction in post-operative knee pain compare to resistance training. It is recommended to make functional exercises an essential part of physical rehabilitation post total knee replacement.

An estimated number of almost over 650,000 total knee replacement surgeries were done in United States in the year 2010 and by 2030 this number is expected to increase to 3.5 million [1]. Total knee arthroplasty is performed in order to ensure long term pain relief and improve patient satisfaction. However, many patients post-TKR have reported persistent impairments and functional limitations as compared to their age-matched controls [2]. Despite of the fact that arthritis related pain goes away after a knee replacement, the strength deficits in hip and knee musculature pose problems for the patients leading to functional limitations [3]. The weakness and delayed activation of quadriceps have been identified as the major cause of activity limitations post TKR [3,4]. The post-operative Quadriceps strength has been found to be reduced to as much as 60% as compared the pre operated strength. Therefore Quadriceps activation is an important consideration for rehabilitation following a total knee arthoplasty [4]. Previous studies have shown the impact of different postoperative rehabilitation strategies as resistance exercises, weight bearing functional exercises, low and high impact sports activities, proprioceptive and balance training. [5-9]. However, there is a need to develop evidence based practice guidelines. Balance training along with traditional functional training has shown positive effects on the functional recovery after total knee replacement [6]. There is an increasing trend of pre-operative and post-operative outpatient Rehabilitation for total knee replacement. [10]. The persistent quadriceps weakness and the resulting functional limitations after TKR are attributed to ineffective post-operative rehabilitation approaches. A universally accepted protocol for post-operative rehabilitation for total knee replacement is lacking. A recent study on the post-operative care after TKR has revealed that 26% patients get the out-patient based physical rehabilitation after their discharge which can have profound effects on the long term well-being and quality of life of the patients [11].

The objective of this study was to determine the effectiveness of strength training as compared to functional training in improving knee extension lag after first four weeks of Total Knee Replacement.

It was a Randomized Controlled Trial conducted with 4 weeks follow up. Patients in control group were given strength training and those in treatment group were given functional training. So the primary variables of study were strengthening exercises given as outpatient basis and strengthening through functional activities given as home plan. The details of these variables are mentioned in next section under the heading “Intervention”. The subjects were selected through purposive sampling technique and then randomly allocated to either control or experimental group by using lottery method. The allocation process was concealed and was performed by a research assistant who was not involved in any further step of research (Figure 1). 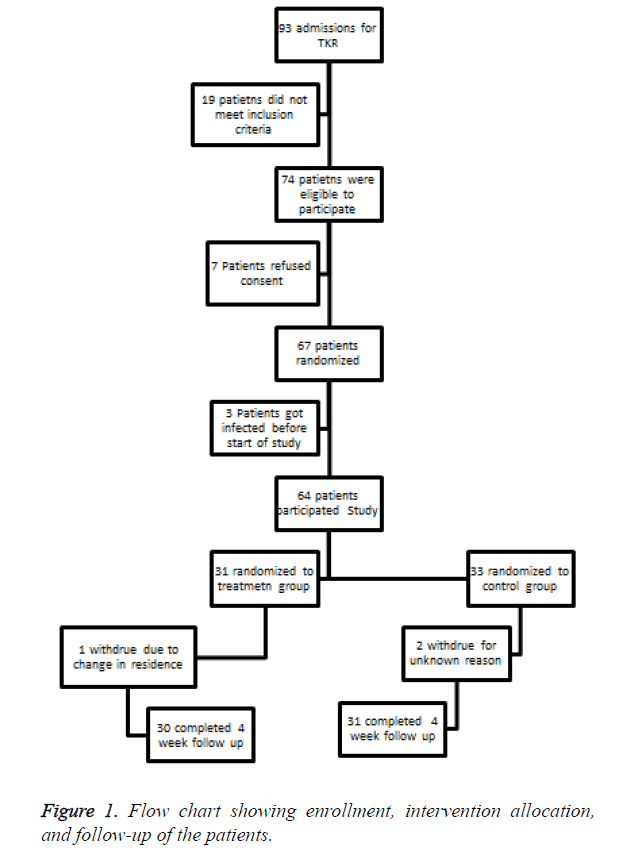 Participants were taken from the list of patients that were waiting for Total Knee Replacement. Patients who met following eligibility criteria were selected: (1) diagnosed with Osteoarthritis of Knee (2) having first TKR surgery, (3) having post-operative goal to ambulate with or without walking aids (4) willing to undertake physical therapy interventions and follow up. Patients for whom total knee arthroplasty was indicated due traumatic knee injury, rheumatoid arthritis or bone tumors were excluded. Of the 4 surgeons involved in the study, 2 were high volume knee replacement surgeons (Defined as more than 80 Total Knee Replacement Surgeries) and 2 surgeons were low volume surgeons. Patients from high and low volume surgeons were evenly divided in 2 groups.

Sample of 64 patients was taken consecutively.

Treatment protocols were managed to hide from patients and assessors. Clinicians, however, had the idea of treatment approach to particular groups. This double blinding was maintained throughout course of trial. Outcome assessment was blinded and carried out by Physical Therapists who were not involved in intervention tasks. This physical therapist was trained in using outcome measures especially the primary one in this study i.e. Goniometer. Assessor physical therapist and patients were blinded from the mode of treatment.

Control group received muscle strengthening program once per day for 5 days a week. It consisted of ankle cuff weights. Different weight sandbags were used for this purpose. Patients were demonstrated the procedure and the methods were observed by experienced physical therapist. Treatment group was given functional activities. Functional activities included squats, lunges and steps (step up, step down).

Functional activities were demonstrated to the treatment group by trained physical therapists. Patients were observed while performing those functional activities. They were provided with illustrated pamphlet of exercises as a home exercise plan.

Analysis was based on “intention to treat” basis. Means, medians, standard deviations were generated for major variables of study. The data was analyzed through SPSS 20.0. Paired sample t-test was used and the change in knee extension lag and pain level were measured at different levels of follow up, because improvement in quadriceps lag was primary outcome and improvement in pain was major secondary outcome of trial.

Ethical approval was obtained and stored according to data protection and storage act [6].

Table 3. Comparison of average values of Pain on Visual analogue scale and knee extension Lag in degrees between control and treatment groups.

The main concern of this study was to establish evidence regarding the effectiveness of strengthening exercise regime versus functional training to restore extensor lag in patients after Total Knee Replacement. In previous studies, various protocols have been used showing variability in results for post-operative rehabilitation after TKR. Balance and functional training have been studied for their effectiveness in improving balance after TKR [6] but current study focuses on two different treatment regimens for correction of extensor lag. Current study has shown that the difference in effectiveness of strength training and functional training in reducing extensor lag was not significant. Significant improvement was found in the secondary outcome i.e. pain for the participants in interventional group. This supports the use of functional activities over strengthening exercises. These results would be helpful in improving quality of life of patients who are unable to get the outpatient physical therapy treatment and prefer a home based plan of exercise instead.

Strengthening through functional activities was used in this study because it has been seen that these exercises are not frequently prescribed as a home plan, which is possibly due to uncertainty in effectiveness of its outcomes [15]. Vuorenmaa et al. [13] have reported that home based exercises were not superior to the conventional physical therapy treatment provided on outpatient basis in reducing pain, disability and improving quality of life. These results are partly consistent with our results. Because this study’s results have shown that strengthening through functional activities had no significant difference from other strengthening methods in which patients have to regularly visit the physical therapy departments; so it can be recommended for the patients especially those belonging to remote areas. These exercise programs could be provided in form of videos and pamphlets to further reduce the cost and ensure the correct performance by the patients. Also in future, utilization of health services and cost minimization should be evaluated as primary outcome to find if strengthening through functional activities can offer significant financial advantages.