One of the most important parameters in Fluid-Attenuated Inversion Recovery (FLAIR) sequences MRI (FLAIR-MRI) is Echo Time (TE), so in this study we compare 100 ms and 165 ms echo time to diagnosis of Multiple Sclerosis (MS) lesions and use it for Flair-MRI protocol in MS patients. In this study we acquired FlAIR images at TE1=100 ms and TE2=165 ms with 1.5 Tesla (T) from 55 patients with MS. And then these images were studied to determine the number and location of MS lesions. Supratentorially and infratentorially, there were significant differences between the two sequences, in 100 ms echo time the number of lesions were 25.52 ± 20.69 (supratentorial), 0.58 ± 0.80 (infratentorial) and in 165 ms echo time 29.04 ± 20.69 (supratentorial), 0.67 ± 0.81 (infratentorial). (P Value=0.000). The presented results suggest that by increasing echo time of FlAIR-MRI diagnosis of MS lesions will be increased. So we can detect the lesions in early stages of the disease and also in follow-up studies.

Multiple Sclerosis (MS) is a demyelinating disease of the Central Nervous System (CNS), mainly influences not only the white matter but also parts of the gray matter in the brain [1-4]. As a result, MS affects the brain and spinal cord and causes disabilities in young people. Early MS symptoms include weakness, tingling, numbness, double vision, blindness in one eye, muscle weakness, trouble with sensation, or trouble with coordination. Other signs are muscle stiffness, thinking problems, and urinary problems [5]. MS is conceptualized as a complex disease, in which several environmental elements and genetic factors act together to result disease [6]. In addition, it is believed that MS is an autoimmune disorder because of showing some similarity with other autoimmune disease, such as predominance of affected women like systemic lupus erythematosus, as an autoimmune disorder [7]; and manifestation with other autoimmune disease not only in affected individuals but also in their family members [8]. Depending on the region, the various risks of MS has been reported [9]. For instance, tropical areas are low prevalence for MS, while the disease is common in temperature areas (Figure 1). 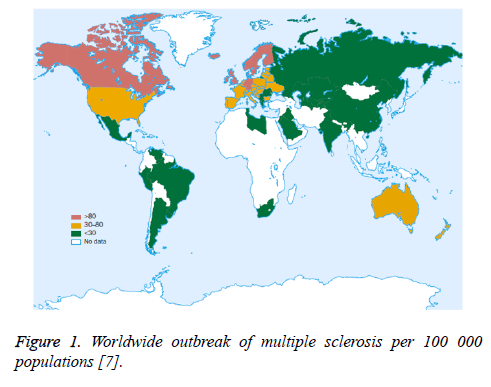 Different diagnostic criteria, including early diagnostic [10] and later diagnostic [11] are used to determine MS in patients. Based on these different criteria, several diagnostic methods are used such as neurological examination, Cerebrospinal Fluid (CSF), neurophysiological studies and Magnetic Resonance Imaging (MRI). Among all these methods, MRI shows a great sensitive assessment for detection of subtle white matter lesions in the brain [12]. Young et al. demonstrated a better sensitivity of MRI in detection of MS lesions [13]. Besides, Jackson and colleagues reported the superior sensitivity for the detection of lesions by MRI in patients both with definite MS and with chronic progression. While, in the case of acute phase, a similar sensitivity was reported by CT scan and MRI [14]. MRI is established as a multi sequence protocol, such as T2-weighted, precontrast and postcontrast T1-weighted, and Fluid-Attenuated Inversion Recovery sequences (FLAIR) for diagnosis of MS [15,16]. FLAIR- MRI provides the highest sensitivity in the detection of lesions close to the CSF [17,18]. Also, FLAIR-MRI sequence inhibits the signal of the adjacent CSF hence exhibits the lesions of MS more apparent [19]. The most reliable method for radiological diagnosis of MS is the use of T1W, T2W and FLAIR sequences in MRI. Lesions are much better seen in T2W, and the accuracy of diagnosis increases adjust to the ependymal with FLAIR. Although, T1W is less sensitive, it has the ability to recognize of old lesions in the corpus callosum. Therefore, usage of contrast to determine new lesions through T1W would be helpful [20]. Hajnal et al. reported the use of FLAIR pulse sequences to suppress the signal from CSF, whereas heavy T2 weighting can be reached by long Echo Time (TE) [21]. Hence, one of the most important parameters in Flair-MRI is Echo Time (TE). So, in this study we compare 100 ms and 165 ms echo time with 1.5 Tesla to diagnosis of MS lesions and use it for Flair-MRI protocol in MS patients.

At first, fifty-five patients with clinically definite multiple sclerosis were assessed on Beasat MRI center of Kerman Medical Sciences University by a single neurologist who personally reviewed all available clinical data and contacted patients. 78.3% of patients were female and the rest, 21.7%, were male. Also, 8.7% of individuals had another disease along with their main disease (multiple sclerosis). While, 87% of the patients were receiving necessary treatment for MS. Nine patients were removed from this investigation because of tumefactive multiple sclerosis, in which the central nervous system has multiple demyelinating lesions with irregular characteristics in spite of standard Multiple Sclerosis (MS). Mean age of the 46 remaining patients were 32.52 ± 8.87 years old, and the average time from the diagnosis has been long past was 3.57 ± 3.04 years (Table 1).

Table 1. Average age and duration of disease detection in samples.

In this center the studies were cross-sectional and each patient had an MRI exam with different sequences, including T1W, T2W and FLAIR-MRI with two various Echo Time (TE), 100 ms and 165 ms, for the comparison detection of supratentorial and infratentorial brain lesions in MS patients. After that, each stereotype of MRI was assessed to identify the exact number and location of old lesions and the new one, which enhanced through post-contrast T1W, related to MS by an experienced radiologist. Each stereotype of MRI was read randomly and done as a double blind experiment, in which the identity of those receiving a test treatment was concealed from both administrators and subjects until after the study was completed. Then, the result was encoded into SPSS software to compare.

Considering the number of multiple sclerosis lesions that could be seen in two different Echo Time (TE) was performed by FLAIR-MRI and was described the experiment for testing the analytical predictions. A comparison of the average number of lesions detectability was performed for the supratentorial region at 100 ms and 165 ms echo time was 22.52 ± 20.29 and 29.04 ± 20.69 respectively (Table 2).

Table 2. The mean number of lesions at different echo time in the supratentorial region.

Table 3. The mean number of lesions at different echo time in the infratentorial region.

The purpose of this study was to identify the optimal TE for FLAIR-MRI at 1.5 T assessing two different echo times to evaluate an appropriate diagnosis for MS lesions. Based on the data given by 100 and 165 ms TE, the best echo time for both infratentorial and supratentorial regions was 165 ms. In addition, some other assessments are also done in this field to find the optimum TE with more contrast and accuracy for FLAIR-MRI in detection of MS. One of the first study was taken into account by Raybrg et al. for the effect of selection of the echo time, and the echo time of 140 ms was introduced as a proper echo time that providing maximum contrast [22]. Pikus et al. claimed the improving detection of artificial Multiple Sclerosis (MS) lesions that were randomly distributed supraand infratentorially on simulated FLAIR-MRI obtained at different echo times [23]. In another study, Beckman et al. showed FLAIR-MRI with three different echo times of 100, 120 and 140 ms to evaluate the best one for detection of MS, and the most powerful identification was done at the echo time of 120 ms [24]. Besides, the stereotypes of FLAIR-MRI with echo times of 90 and 155 ms was investigated by Polman et al. which pointed that the more echo time, the more lesions in supratentorial region; although the number of false positive lesions would increase as well. While there was no difference for detection of infrantentorial lesions with these two echo times [25].