Comparison of different models of insulin resistance in T2DM: A crosssectional study.

The prevalence of type 2 diabetes has been increasing rapidly resulting in increased morbidity and mortality. Studies suggest that intensification of glycemic control with insulin significantly decreased the risk of diabetic complications over a period of time [1]. Early intensive insulin therapy in newly diagnosed type 2 diabetes mellitus patients might have better recovery and maintenance of β-cell function and longtime diabetic remission [2].

Type 2 diabetes is progressive and that insulin will probably have to be used at some point. Introduction of short-acting insulin has apparently improved postprandial glucose control in type 2 diabetes mellitus.

With the prevalence of type 2 diabetes on the rise and with the recognized need for strict glycemic control in the prevention of complications, strategies for aggressive treatment must be put into effect. Such strategies might include the early use of insulin, alone or in combination with other antidiabetic agents. Several studies have clearly shown that basal insulin therapy, particularly using the insulin analog glargine, closely mimics the body’s physiological secretion of basal insulin and may be added to an existing oral regimen, used alone, or used with preprandial insulin. Decision making regarding therapeutic approach and effectiveness of treatment depends on the measurement of insulin levels and sensitivity of tissues to insulin.

Insulin plays a major role in maintaining glucose homeostasis. Insulin resistance (IR) leads to impaired glucose tolerance and plays an important pathophysiological role in the development of diabetes. Insulin resistance (IR) is established by genetic and environmental factors. It is important to quantify IR as it is a predisposing factor for the development of metabolic syndrome, diabetes mellitus, cardiovascular diseases. Hyperinsulinemic-euglycemic clamp (HEC) is known to be the “gold standard” for the measurement of insulin sensitivity. However, the realization that it is time and money consuming led to the development of a simplified approach in the quantification of insulin sensitivity. Homeostasis model assessment (HOMA) and quantitative insulin sensitivity check index (QUICKI) are two clinically important insulin resistance/sensitivity indices.

Homeostatic model assessment (HOMA) is a method used to quantify insulin resistance and beta-cell function from basal (fasting) glucose and insulin or C-peptide concentrations. Simple, minimally invasive predicts fasting steady-state glucose and insulin levels. However, insulin sensitivity in subjects treated with insulin needs further validation. HOMA describes this glucose-insulin homeostasis by means of a set of simple, mathematically-derived nonlinear equations [3,4]. Estimation with the help of the HOMA model parallels equally with that of the euglycemic clamp method [4].

C-peptide, a measure of insulin secretion (not insulin action), can be used in HOMA modeling of both β-cell function and IR. Insulin resistance calculated by the formula, 20/(Fasting C-peptide x FPG) is also a sensitive marker.

It is an empirically derived mathematical transformation of fasting blood glucose and plasma insulin concentrations that provide a consistent and precise insulin sensitivity index with a better positive predictive power [5].

Both HOMA and QUICKI are proved to be clinically important models of quantifying insulin resistance/sensitivity. It is important to quantify IR in diabetics as it may guide in treatment options.

Objectives of our study were to

2. Compare different sensitivity indices like QUICKI and HOMA (both insulin and C-peptide based).

The cross-sectional study was conducted in the Department of Biochemistry, KS Hegde Medical Academy, Mangalore. Institutional ethics committee approval was sought before starting the study. Informed consent was obtained from the subjects.

Insulin resistance was calculated by the homeostasis model assessment (HOMA) (both insulin and C-peptide based) and QUICKI using standard formulae. 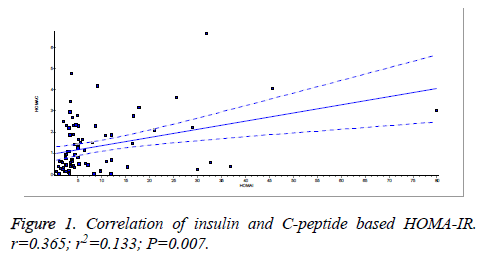 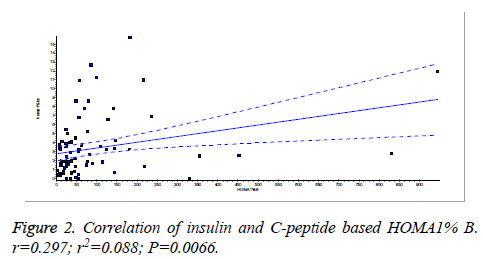 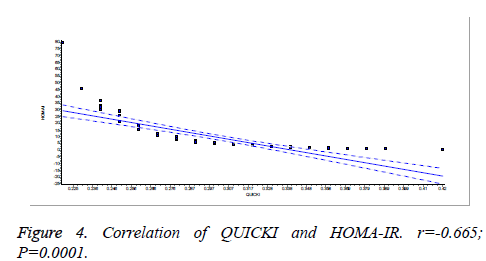 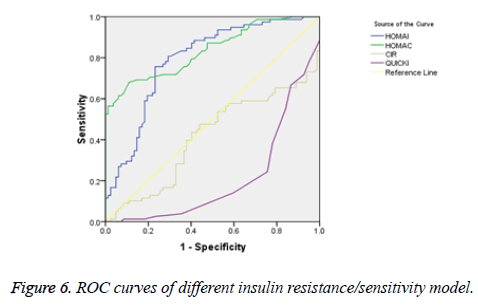 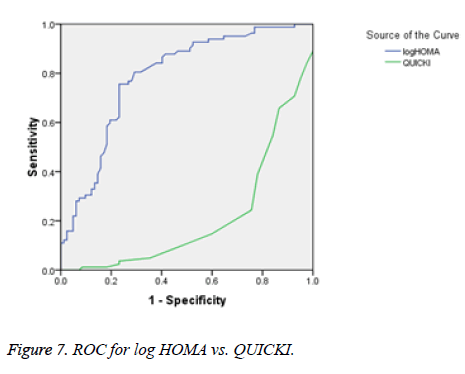 Our findings are in accordance with the study by Kim et al., which suggested a higher area under curve (AUC) for C-peptide based IR models [6]. Fasting C-peptide × fasting glucose was better associated with insulin resistance measured as hyperinsulinemic-euglycemic clamps than HOMA-IR [7]. Meier et al. reported that C-peptide-based index was more closely correlated than an insulin-based index with β-cell mass [8]. Loopstra-Masters et al. report that proinsulin-to-C-peptide ratio was the stronger predictor of diabetes in comparison with proinsulin-to-insulin ratios [9].

C-peptide is may be better index compared to insulin based IR models. C-peptide doesn’t undergo hepatic extraction, so C-peptide may more accurately reflect pre-hepatic β-cell secretion. Pre-hepatic β-cell insulin secretion can be estimated by plasma C-peptide level [10,11]. C-peptides have more steady clearance than insulin [10]. C-peptide has lower within the subject and between-subject variation than insulin, so C-peptides were more reproducible for the determination of β-cell function [12,13]. C-peptide has the insulinomimetic effect and may also interact synergistically with insulin by disaggregating hexameric insulin into active monomeric form [14,15].

A significant negative linear relationship between QUICKI and both the HOMA models suggest that lower the QUICKI more is the insulin resistance (Figures 4 and 5). ROC analysis shows that log HOMA represents insulin resistance better than QUICKI (Figure 7 and Table 2).

Table 2: AUC, sensitivity, and specificity for log HOMA and QUICKI.

Sincere thanks to Dr. Sukanya Shetty, HOD Biochemistry for support.

Funded partly by Nitte-Deemed to be University and Research Society for Study of Diabetes in India (RSSDI).