Comparison of adverse pregnancy outcome between teenage and adult women at a tertiary hospital in South Africa.

Teenage pregnancy is considered to be an important public health problem and it is most prevalent in sub-Saharan Africa. Studies from developed and developing countries regard-ing adverse teenage pregnancy outcomes differ. The objective of this study is to investigate adverse obstetric outcome in teenage pregnancy in comparison with the adult pregnancy at a tertiary hospital in South Africa. A retrospective comparative study was conducted target-ing the records of pregnant patients who delivered at a tertiary hospital in South Africa from 1st September – 30th November 2010 where the pregnancy outcome of teenagers who were less than 18 years old were compared with the adult women (≥18 years). Binary logistic regression method was carried out to find if teenage age was a significant predictor for the negative pregnancy outcome. Overall, the teenage pregnancy rate over the study period was 10.3%. Significantly higher rate of caesarean delivery was found among adult mothers compared to teenage mothers (p=0.002). Regarding preterm delivery, low birth weight, very low birth weight rate, fresh stillbirth and macerated still birth rates were found to be simi-lar between the teenage and adult mothers (p>0.05). Comparing mean Apgar score between the teenage and adult mothers, the study found significant difference of mean Apgar score at 5 min (9.0 vs. 8.5), (p=0.016).This study highlighted that the teenage mothers show similar obstetrics outcome when compared with their adult counterparts.

An age of 10 – 17-year (teenage) is known as transition period from childhood to adulthood during which sexual activity may take place. Teenagers may consider them-selves grown up and therefore mature enough to have sex [1,2]. They often lack knowledge about consequences of unprotected sex such as unwanted pregnancy and sexually transmitted infections including HIV/AIDS [3]. It is esti-mated that about 90% of the teenage births occur in de-veloping countries [4,5]. In South Africa, teenage preg-nancies occur within the context of unstable relationship which means they are unplanned or unwanted [6]. In this study, teenage pregnancy is defined as females below the age of 18 years who were pregnant. South African law that allows a girl of less than 18 years old who can con-sent to have sex and can consent to have surgical proce-dures.

It is reported that half of the world’s burden of maternal, newborn and child death is occurring on sub-Saharan Africa with over 13000 mother, newborns and children dying every day [7,8]. Teenage pregnancy in sub-Saharan African region is about 55% [9]. Thus, it is paramount importance to improve maternal, newborn and child health in Africa. The UN-Millennium Development Goals defined the aim to reduce maternal mortality by 75% and the mortality of children below the age of 5 years by 67% until 2015 [10].

Studies from developed and developing countries regard-ing teenage pregnancy outcomes differ. Some reported that teenage pregnancies were at increased risk for pre-term delivery, low birth weight (LBW), and neonatal mortality [11,12]. The relation between teenage pregnan-cy and shorter gestational age (SGA) has been reported [12,13]. Depression, anxiety and induced abortions are common among adolescent pregnant patients [14,15]. The independent effect of maternal age on the frequency of preterm delivery, LBW and neonatal mortality could nev-ertheless be significant when age at first childbirth falls below 16 years [16]. However, after controlling the effect of socio-economic confounders, most of the other studies found no increased obstetric and child health risks among teenagers compared to the adult mothers [17,18]. These obstetric outcomes between teenage and adult mothers for the developed world are partly related to important ad-vances in obstetric care and social contexts of pregnancy [19].

A high rate of teenage pregnancy in a country indicates problems with the sexual and reproductive health of the youth. This has implications on other health issues such as the spread of sexually transmitted diseases (STDs) and HIV. No systematic study has been conducted at a tertiary hospital regarding teenage pregnancy and its obstetric outcomes in relation to its adult counterparts. Thus, the purpose of this study is to investigate adverse obstetric outcomes in teenage pregnancies in comparison with adult pregnancies at a tertiary hospital in South Africa.

Study design and setting: A retrospective comparative study was conducted with the recorded pregnant patients who delivered at Dr. George Mukhari Hospital (DGMH), from 1stSeptember to 30th November 2010. The pregnan-cy outcomes of the patients of less than 18 years (teenag-ers) were compared with adult women (≥18 years) [20]. The hospital is situated about 45km north of the capital city, Pretoria. It is a tertiary hospital with 1550 beds, a referral hospital serving patients all around Gauteng, Limpopo, North West, Mpumalanga provinces and other neighbouring countries. The hospital offers primary health care, secondary, tertiary, support, and academic services. The hospital mainly caters for patients with dis-advantaged backgrounds. On average, 8500 deliveries are taken place per annum in this hospital.

Data were collected from the labour ward delivery regis-ter and specific information was transcribed to the data collection form. The register has been developed and dis-tributed by the National Department of Health of South Africa and is being used at DGMH. The register is the only official record of deliveries contains (name, age, ad-dress of mothers), the pregnancy (gestational age, antena-tal care information and complications of pregnancy), obstetric, labour and perinatal information. The obstetric information on the register included: presentation of foe-tus during labour, plurality, time of delivery (recorded in hours and minute), mode of delivery (normal vaginal, vaginal delivery using operative procedure such as vacu-um or forceps and caesarean section), and complications of delivery (e.g., perineal and or cervical tear). Perinatal information included: birth weight, and birth outcome of babies (live birth, still birth, Apgar score in 1 and 5 minutes). The attending midwives recorded all these data.

No sampling was done for the study, as all records of pregnant women who delivered between 1st September and 30th November 2010 were part of the study.

We included all the pregnant women who delivered be-tween 1st September and 30th November 2010 and exclud-ed those who were diabetic, had cardiac problems and had multiple pregnancies.

Data were entered into a Microsoft Excel 2003 spread-sheet and imported to SPSS 17.0 for window version for analysis. The demographics variables were summarized using descriptive summary measures: expressed as mean (standard deviation) for continuous variables, and percent for categorical variables. The chi-square test was used to find any associations between categorical variables. Bina-ry logistic regression method was carried out to find if age of the teenage was a significant predictor for the negative pregnancy outcome. All statistical tests were performed using two-sided tests at the 0.05 level of sig-nificance. For all regression models, the results were ex-pressed as effect (or odds ratios for binary outcomes), corresponding two-sided 95% confidence intervals and associated p-values. The p-values reported to three deci-mal places with values less than 0.001 being reported as <0.001. The p-values less than 0.05 considered statistical-ly significant.

Institutional approval was obtained from the Medunsa Research Ethics Committee of the University of Limpo-po, South Africa, before starting this study. There was also concurrent approval by the hospital (DGMH) man-agement to utilize information from patients’ files.

A total of 2445 deliveries occurred during the study peri-od (1st September – 30th November’ 2010). One hundred twenty of 2445 (4.9%) deliveries of multiple pregnancies were excluded from the study. Table 1 provides infor-mation regarding maternal HIV, and referral information between teenage and adult women. Among the study sample, the prevalence of teenage pregnancy was 10.3%.The mean age was significantly different between teenage and adult women (16.9 yrs vs. 27.7 yrs, p<0.001). Regarding parity, majority (92.1%) of teenage mothers were primiparas compared to the adult women (31.4%), (p<0.001). HIV positive mothers were found to be 30.2% among the adult women compared to teenage mothers (9.2%), (p<0.001). Booking for delivery and referral pat-terns were similar between the two groups (p>0.05). 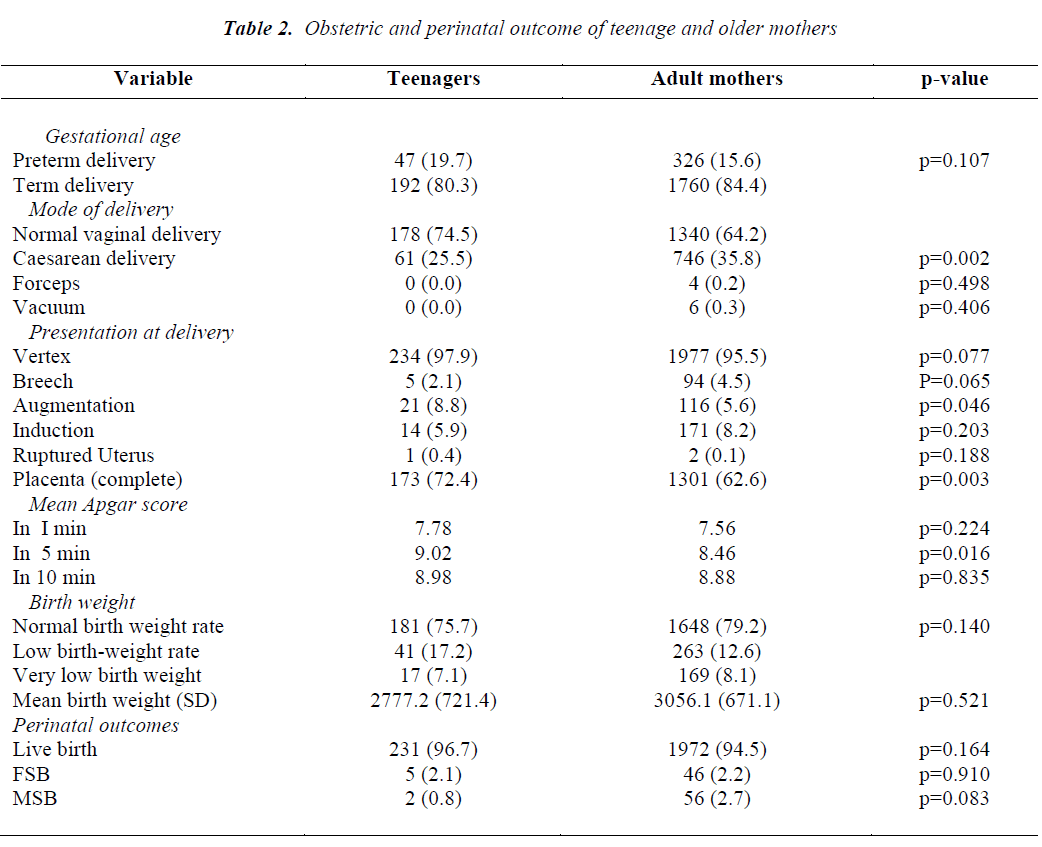 Table 2: Obstetric and perinatal outcome of teenage and older mothers.

Applying Chi-square test association, the study found that birth weight of the baby was significantly associated with mother’s HIV status as more LBW babies were born among HIV-positive mothers compared to mothers who were negative (p=0.007). Preterm and MSB rates were similar between HIV-positive and negative mothers (p>0.05) but FSB rate was higher (2.5%) among HIV- negative mothers compared to HIV-positive mothers (1.2%), (p=0.043). Preterm and LBW to VLBW babies were referred compared to self-referred (p=0.032 and p=0.002, respectively, data not shown). In this study, run-ning binary logistic regression analysis did not find teen-age pregnancy as a significant predictor for negative pregnancy outcome, such as LBW, preterm delivery, FSB, and MSB (Table 3).

Since no systematic study was conducted at this tertiary hospital regarding teenage pregnancy and its outcomes to date, this study aimed to investigate adverse obstetric out-come in teenage pregnancy in comparison with the adult pregnancy. Teenage pregnancy rate in this hospital was 10.3%, which is lower than that of national rate of 12% as well as other studies conducted in rural South Africa [21-23]. So this study supports the notion that teenage birth rate is declining, that is from 102 per 1000 births in 1995 to 73 in 2005 [24].

Regarding mode of delivery, we find conflicting reports as many studies have reported increased operative deliveries but others found less operative interventions among teenage mothers compared to adult mothers [12,25,26]. Caesarean delivery was significantly lower among the teenagers in this setting, which is similar to other South African study. A rural hospital-based South African study found lower rate of caesarean delivery among teenage mothers [23]. A recent Austrian study reported that during the last 18 years, caesarean rate among the adolescents remained the same [27]. A Saudi Arabian study indicated that cases of caesarean delivery did not differ between teenage and older mothers [28].

Preterm delivery, LBW, VLBW, FSB, and MSB rates were also found to be similar between teenage and adult mothers. This finding is in line with other South African study [23]. In a recent study, investigators found that teenage pregnancy was related to increased risk of pre-term delivery [33]. Other studies have also described teenage pregnancy as the major risk factor for preterm birth and LBW [25,32,34,35]. Studies from Saudi Arabia and Nigeria also reported no significant increase rates of FSB and MSB between teenage and older mothers [18,28]. Pregnant teenagers are biologically immature. This biological immaturity might result in growth re-striction of the offspring. According to a study it was mentioned that newborn growth restriction is mainly due to increased rate of preterm delivery, which is presumed to be deficient physical development of the mother [36]. Our findings, however, differ from studies that found an increase in adverse pregnancy outcomes in teenagers. This difference could be explained by the fact that the various teenage populations tend to have different socio-economic factors, which in turn affect pregnancy outcome differently. Also, in South Africa, primary health care services are free of charge, which caused high utilization rate of antenatal services which gives special attention to mothers considered to be at greater risk as well as nutri-tional advice.

Study limitations: This is a retrospective study, which is possibly prone to missing information. Large sample size in this study minimized this biasness. The results of this study only focus on women delivering live infants in health facilities and do not account for early abortions or home deliveries that constitute an important bias.

The authors thank the Biostatistics Department of the University of Limpopo (Medunsa campus) for providing funding to present the data.