This experiment was carried out with the aim to compare the effect of three extenders on frozen-thawed sperm characteristics in goat. Sperm of Katjang and their crossbreds; Jer-masia and Jermana were cryopreserved in three extenders namely tris-citric acid yolk (TCAYE), yolk albumin citrate (YACE) and skimmed milk (SME) and the frozen-thawed sperm parameter were examined. The finding of this study showed that the Jermasia and Jermana buck sperm cryopreserved in TCAYE provided the best results in terms of motility (52.64 ± 0.93% and 53.20 ± 1.13% ) and livability (56.47± 0.96% and 57.72 ± 1.11%), re-spectively. In the crossbreds, sperm motility and livability in TCAYE were found to be sig-nificantly higher compared to the sperm cryopreserved in YACE and SME. Therefore, TCAYE extender apparently is better than YACE followed by SME for the cryopreserva-tion of goat sperm.

Variation in the results of buck semen cryopreservation is attributed to many confounding factors which include processing techniques, choice of cryoprotectants, extend-ers dilution, cooling and thawing rates [1,2]. According to Purdy [1], an extender for cryopreservation serves as an energy source and protects sperm cells from cryogeni-cally-induced damage, thus maintaining sperm survivabil-ity. The choice of extender plays an important role in de-termining the viability of deep frozen semen. Different species have dissimilar nutritional requirements, and thus the type of extender used must cater for its specific needs. For example, the egg yolk-coagulating enzyme (EYCE) secreted by the bulbourethral gland of the goat has been shown to cause egg yolk coagulation and sperm death [3]. This phospholipase-A enzyme hydrolyses egg yolk leci-thin to fatty acids and lysolecithin [4,5]. Lysolecithin is toxic to goat sperm. A protein identified as SBUIII from the same gland, was also found to decrease survival of cooled or frozen goat sperm diluted in milk-based extend-ers [6]. The component that causes this effect was later identified as tricylglycerol lipase [7]. The component caused a decrease in sperm motility and the quality of movement in skim milk extender.

Three local Katjang bucks and nine crossbred Jermasia and Jermana bucks ageing nine months to three years were used in this study. Animals for semen collection were selected based on the criteria suggested by Mukher-jee [8]. The crossbreds in the study were the products of a crossbreeding project jointly carried out between the In-stitute of Advanced Studies, University of Malaya, Ma-laysia and the Technical University of Berlin, Germany.

Semen collection was done between 0800 to 0900 hr by using an artificial vagina (AV). The semen collection tube was wrapped by aluminum foil to minimise exposure to light. AV method required the use of restrained female goats in oestrus as teasers.

French-type 0.25 ml polyvinylchloride (PVC) straws were used in the packaging of semen for freezing. All semen-filled straws were left with an air space at its distal end and sealed with polyvinyl alcohol (PVA) powder. Straws were lined on a grooved perspex frame and kept in nitro- gen vapour (-150°C) for 9 min before plunging into liquid nitrogen.

Frozen straw was taken out from liquid nitrogen and im-mersed in a water bath at 37°C for 2 min. All straws were wiped-dry before cutting off the tips and releasing cryo-preserved sperm into microfuge tubes in a floating water-bath rack at 37°C.

The quality of neat and frozen-thawed semen were evalu-ated based on composite characteristics. Percentage of sperm motility, livability and mass movement ratings (Nelson and Lin, 1983) [9] as shown in Table 1 were re-corded. Semen was diluted with basic tris-citric acid buf-fer (pH 6.75) prior to assess sperm motility. 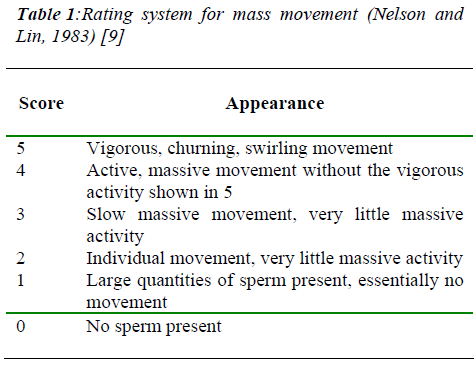 Statistical analysis was performed using the Statistical Package for Social Sciences (SPSS) programme. Data were analysed through analysis of variance and Duncan’s Multiple Range Test. A P value of < 0.05 was considered to be statistically significant.

The finding of this study showed that the Jermasia and Jermana buck sperm cryopreserved in TCAYE provided the best results in terms of motility (52.64 ± 0.93% and 53.20 ± 1.13% ) and livability (56.47± 0.96% and 57.72 ± 1.11%), respectively. In the crossbreds, sperm motility and livability in TCAYE were found to be significantly higher compared to the sperm cryopreserved in YACE and SME.

Interactions between Jermasia and Jermana bucks with TCAYE gave the best results in terms of motility (52.64 ± 0.93% and 53.20 ± 1.13% ) and live sperm percentage (56.47± 0.96% and 57.72 ± 1.11%), respectively. In the crossbreds, sperm motility and livability in TCAYE were significantly higher compared to sperm cryopreserved in YACE and SME. The mean values for motility and liv-ability sperm in all extenders were higher in Jermana bucks compared to Katjang and Jermasia bucks which is also reported by Noran [10]. The sperm motility and mass movement were found to be higher for crossbred goat. For all genotypes, TCAYE was found to be the best ex-tender in terms of frozen-thawed sperm motility, livability and mass movement. This finding is consistent with the finding of Dorado et al. [11], who found that tris extender produced better frozen-thawed sperm motility and veloc-ity parameters compared to skimmed milk extender, as measured by sperm class analyser (CASA). Hidalgo et al. [12] in their comparative study by using commercial tris- and skimmed milk-based extenders and found that milk extender caused less reduction of sperm head size in Flor-ida bucks. However, cryopreservation of Florida goat se-men using TCAYE extender results in slightly improved rate of motility (56.07 ± 1.32) [13]. Studies have shown that the removal of seminal plasma by washing immedi-ately after collection increases motility and livability of sperm during storage in egg yolk or milk extenders [14,15].