#These authors have equally contributed for this work

Background: Cesarean Scar Pregnancy (CSP) is caused by implantation of embryonic tissues into the left on uterine tissues left by previous Cesarean section. Severe consequences including uterine rupture and haemorrhage shock is highly likely without timely termination of pregnancy. Various surgical methods have been proposed but lacking a systemic guideline for choice of treatment. This study thus investigated the treatment efficacy and safety of various methods targeting CSP in a retrospective case study manner.

Results: All 21 patients (including one patient refusing UAE or total hysterectomy) had successful treatment without infection, haemorrhage or liver/renal dysfunction. By choosing different methods according to pre-op conditions of patients, all those 20 patients keeping uterus intact had normal menstrual cycles.

Conclusion: Different approaches should be selected based on individual conditions of CSP patients to both minimize trauma and to maximize efficacy.

Cesarean Scar Pregnancy (CSP) is one ectopic pregnancy when the embryo implants into the micro-cleft at scar tissues after cesarean section. In recent decades, with increasing rate of cesarean section, incidence of CSP is also gradually increasing [1]. Previous studies showed that overall incidence of CSP were around 1:1800 to 1:2216 [2,3]. There were 21 CSP cases out of 920 ectopic pregnancy patients (2.28%) in one single hospital from Jun 2010 to Dec 2014. The diagnosis of CSP mainly depends on ultrasound examination and MRI, although the golden standard is the biopsy for embryonic tissues from scar site under assisted by ultrasound or hysteroscopy.

Currently treatment methods for CSP have not been unified, as different reports obtained diversified treatment efficacy under specific scenarios [2-4]. CSP without timely management frequently causes uterus rupture, causing major haemorrhage, shock or even death. The pregnancy should be terminated once having confirmed diagnosis. It is critical to establish appropriate treatment method in order to maximally maintain patient’s fertility and to avoid severe complication. We thus performed a retrospective study covering 21 CSP patients who were admitted in our hospital from Jun 2010 to Dec 2014, in order to investigate the treatment efficacy and safety of different methods targeting CSP.

The diagnosis of CSP followed standards stipulated by Godin et al. [1]. All patients in this study were recruited based on the following criteria: (1) No evidence of pregnancy in uterus; (2) No pregnant indication in cervical canal; (3) Gestational sac, which was measured as long and short diameters under computer-assisted ultrasound on anterior wall of uterus isthmus; (4) Uterus muscular defects between pregnant sac and bladder.

In all 21 CSP patients, 5 of them received MTX+ultrasound assisted uterine curettage, 10 patients received MTX+UAE +ultrasound assisted uterine curettage, 5 patients had MTX +UAE+resection of scar pregnant mass under hysteroscopy, whilst the remaining one patient without pregnant requirement had total hysterectomy. All 21 patients had successful surgeries without severe complications including infection, major haemorrhage, and liver/renal dysfunction. 20 patients who retained uterus had normal menstrual cycles after surgery. A brief summary of clinical parameters among various treatment methods was shown in Table 1.

Table 1. Comparison of clinical parameters among all treatment.

Five patients received MTX treatment plus ultrasound assisted uterine curettage. Four of them were diagnosed as CSP at early stage. Clinical manifestations included minor bleeding from vagina, without lower abdominal pain. Average size of mass was 0.75 ± 0.4 cm, with HCG at 2867 ± 3956 IU/L, plus 125 ± 35.4 ml pre-op bleeding volume. After surgery, HCG level was significantly decreased (2167 ± 64 IU/L, p<0.05 by student t-test). The hospitalization period of all patients ranged from 4 to 19 d (average=6.5 ± 3.5 d). Blood supply conditions at uterine scar sites before and after MTX application were shown in Figure 1A. 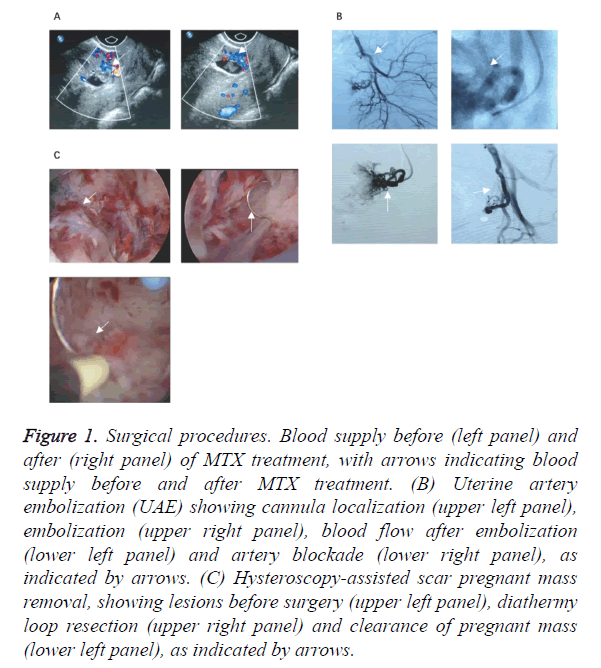 UAE plus resection of scar pregnant mass under hysteroscopy

Due to the relatively lower incidence, there has been no unified treatment plan for CSP [5,6]. It is necessary to terminate pregnancy once being diagnosed with CSP, as it can cause uncontrollable bleeding by uterus rupture. The maintenance of fertility of young patients is one major concern. In past decades, total hysterectomy is the most popular surgical plan to avoid severe bleeding [7]. With advancement of ultrasound diagnosis, CSP now has multiple treatment choices including medicine or surgery, the latter of which includes MTX +ultrasound assisted uterine curettage, UAE+ultrasound assisted uterine curettage, UAE+resection of scar pregnant mass under hysteroscopy and total hysterectomy. This study thus compared and contrasted these four surgical approaches by analysing clinical indexes in a retrospective manner.

UAE+resection of scar pregnant mass under hysteroscopy is recognize as one treatment method for CSP [11]. It has advantages as visual guidance during removal of pregnant mass, plus clotting haemostasis. It is thus applicable for those patients with inward growing pregnant mass. However, this approach has not been widely promoted, and has potential risks as the require for open surgery once encountered major bleeding under hysteroscopy, thus causing major trauma wounds for patients, affecting its promotion. Recently, the intravaginal incision of uterus has been suggested in CSP radical surgery, as it has relatively shorter operation time, less trauma or bleeding, rapidly decreased HCG level and faster recovery of menstrual cycle, and is thus one alternative treatment plan for CSP [12]. We performed 5 cases of UAE +resection of scar pregnant mass under hysteroscopy. Patients had relatively larger mass (2.3 × 1.55 cm on average) and higher HCG level (31371 ± 24941 IU/L) compared to other two groups. However, no major bleeding occurred during the surgery. Patients had satisfactory recovery and rapidly decreased HCG. In sum, UAE+resection of scar pregnant mass under hysteroscopy may be applied to those with larger mass size (2.0 × 2.0 cm to 3.0 × 3.0 cm), stable vital signs and insufficient blood supply at scar tissues.

Total hysterectomy is the last resort method when major haemorrhage threatens patient’s life and no other choices are available in CSP patients. The primary principle in CSP treatment is to retain fertile function to maximal level. Therefore, total hysterectomy may be only available for those patients with abundant haemorrhage or even shock, and occurrence of severe complications such as DIC. In this study, only one patient chose this approach due to relatively larger vaginal bleeding, plus no willingness of pregnancy in future. Satisfactory results were obtained by hysterectomy as bleeding was effectively managed and lab results rapidly restored to normal levels.

In summary, this study indicates the necessary for individualized treatment on CSP patients. Major consideration should be made according to the size of pregnant mass, pre-op HCG level and vaginal bleeding volume [13]. Three approaches, including MTX+ultrasound assisted uterine curettage, MTX+UAE+ultrasound assisted uterine curettage, and MTX+UAE+resection of scar pregnant mass under hysteroscopy can all achieve satisfactory efficacy once being chosen and applied reasonably and appropriately. All these methods had minor surgical trauma, less post-op complication, plus the ability to retain of uterine and fertile functions. The selection among these methods should be made based on mass size, pre-op haemorrhage volume and pre-op HCG level. In general, we believe that MTX+curettage may be applied to patients with smaller lesion size (<1 cm), relatively lower pre-op HCG level (~3000 IU/L) and relatively less haemorrhage (~100 ml). MTX+UAE+curettage can be employed for those patients with medium mass size (~1.5 cm), higher pre-op HCG level (>100000 IU/L), and more haemorrhage (>1000ml). MTX+UAE+resection of scar pregnant mass under hysteroscopy can be applied in those with larger mass size (>2 cm), relatively higher pre-op HCG (around 30000 IU/L), and fewer haemorrhage (~80 ml). In one word, MTX+UAE +curettage can be applied in the most severe CSP cases, whereas MTX+curettage can be adopted to patients with smaller mass size, and MTX+UAE+hysteroscopy is appropriate for patients with larger mass size but fewer bleeding. As an alternative choice, total hysterectomy can be applied to patients with severe bleeding and under life threatening critical conditions. CSP mainly occurs in scar tissues after caesarean section, therefore, caesarean section should be strictly controlled under normal circumstance. During caesarean section, the uterus wound should be carefully sutured to accelerate wound healing. Once having found CSP, early diagnosis and treatment should be performed immediately to stipulate individualized treatment plan, to achieve the best prognosis for patients.

Treatment for CSP should be individualized based on size of pregnant mass, HCG level before treatment and haemorrhage volume of vagina: (1) For those lesions smaller than 1.0 × 1.0 cm and pre-op HCG level<3000 IU/L, minor vaginal bleeding and stable vital signs, MTX+curettage can be performed under ultrasound monitor. (2) For pregnant mass<2.0 × 2.0 cm, with insufficient blood supply at uterus scar, curettage can be performed at 48~72 h after UAE surgery. (3) Post-UAE hysteroscopy can be performed to clear pregnant mass with size between 2.0 × 2.0 cm ~3.0 × 3.0 cm, with minor virginal bleeding, stable vital signs and insufficient blood supply at scar site; (4) For those patients having no birth plan, major bleeding, unstable vital signs or even shock or DIC, hysterectomy can be performed. In summary, under optimized choice, all treatment measures as above-mentioned can achieve satisfactory efficacy.

All authors declare that they have no conflict of interest.