Lung cancer is the leading cause of cancer-related mortality [1-4]. Although the incidence of lung cancer is decreasing [3], the number of patients presenting with a second primary cancer has dramatically increased in the last decades. A simultaneous second primary lung carcinoma occurs in 1-8% of lung cancer patients [5]. The occurrence of multiple primary cancers may be attributed to shared aetiological factors.

For non-small cell lung cancer patients 18F-fluorodeoxyglucose positron emission tomography (FDG PET) is recommended according to the American College of Chest Physicians (ACCP) guidelines as standard work-up in potentially curable lung cancer based on conventional imaging. The rate of detection of unanticipated metastasis by FDG PET has been reported as 1-18% in patients with clinical stage I or II disease [6]. When a FDG PET scan is made for lung cancer staging, both metastases as well as synchronous primary tumours can be visualized. While multiple lung nodules of varying sizes are usually classified as metastases, it is a much greater challenge to distinguish a lung metastasis from a second primary lung carcinoma when only one additional pulmonary lesion is detected [7].

A total of 318 patients (220 men and 98 women) between November 2015 and October 2018 at Bach Mai hospital were retrospectively screened. First, patients were included in the ‘second primary group’ when they presented with two primary tumours, including any index tumour and a synchronous pulmonary tumour, defined as a tumour diagnosed within 6 months of diagnosis of the index tumour [3]. Second, patients with lung cancer metastasized to the same lobe (stage IIIB) or to different lobes or other organs (stage IV) were consecutively searched for and included to form the control group (or ‘metastatic disease group’), until a similar sample size as of the second primary group was reached.

All patients underwent diagnostic and/or staging FDG-PET-CT prior to biopsy or therapy. Patients were asked to fast at least 6 h before the FDG-PET-CT scan. All patients had a glucose level below 180 mg/dl and was injected intravenously with 0.15-0.20 mCi /kg (7-12 mCi) FDG. At 45-60 min after the injection, data were acquired from the vertex to the upper thigh. Immediately after CT, a PET scan (PET/CT Biograph true point-Siemens, Germany) was performed for about 25 min, with seven to eight bed positions and 3 min/position. PET images were reconstructed iteratively with CT data for attenuation correction, using an inline integrated Siemens Esoft Workstation system. Computerized tomography integrated positron emission tomography fusion images in transaxial, sagittal and coronal planes were evaluated visually, and the SUVmax of lesions was obtained from transaxial images.

The maximum SUV (SUVmax, the activity from the maximumvalued pixel within the tumour volume of interest (VOI); here- after referred to as SUV) normalized to injected activity and patient body weight was calculated at approximately 60 min after tracer injection for each primary lesion and the chosen metastatic lesion with use of the following equation: SUV=maximum activity concentration in the VOI (kBq/ml)/ (injected dose (MBq/ml)/patient body weight (kg)). In patients with multiple metastatic lesions, the lesion with the largest diameter was chosen to prevent partial volume effects.

Area under the receiver-operating characteristic curve and cut-off value

After constructing a receiver-operating characteristic (ROC) curve of the SUVmax, the area under the curve (AUC) was assessed, and the sensitivity, specificity were determined for an optimal cut-off of the SUVmax.

Since the SUVmax was normally distributed in both groups, an independent samples one-tailed ANOVA test was used to compare the mean SUVmax between the second primary tumour and metastatic disease group. Mean age were compared using a two-sided t-test.

The mean age of the patients (57 men and 24 women) was 62.7 y (range: 26-87 y). Other patient characteristics are presented in Table 1. Patient age, sex were not significantly different between patients with metastatic disease and a second primary tumour (p>0.05). Adenocarcinomas were the most commonly diagnosed tumours in both groups.

Table 1. Patients with metastatic disease and a second primary tumour.

The SUVmax of metastatic disease and a second primary tumour 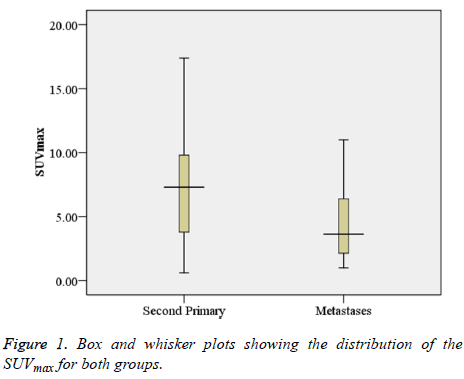 Figure 1:Box and whisker plots showing the distribution of the SUVmax for both groups. 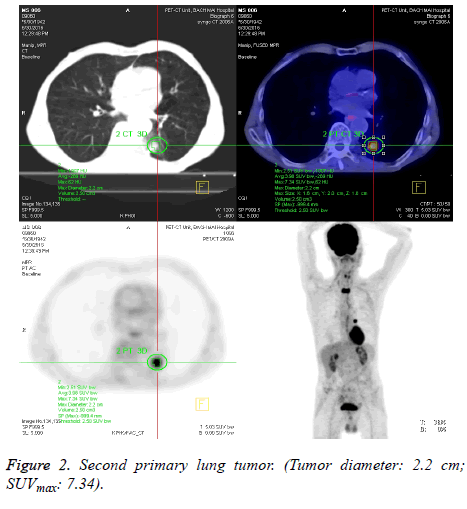 Area under the ROC and cut-off value 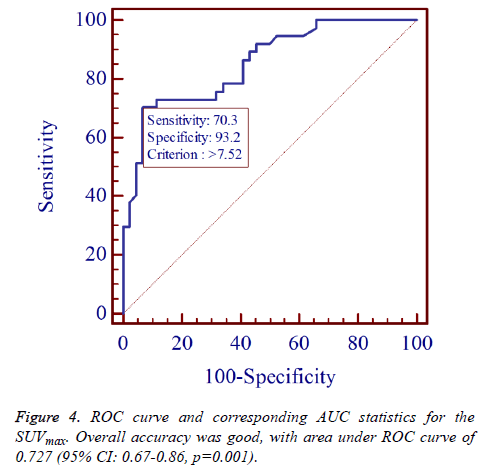 To our knowledge, this is the first study in Vietnam investigating the role of quantitative FDG PET in discriminating metastases from second primary tumours in cases of synchronously presenting lesions. A significantly larger SUVmax between two tumours was found in patients presenting with two primary tumours as compared to patients with metastatic disease involving the lungs. The moderately high accuracy, as measured with the AUC, as well as the good sensitivity and specificity of the SUVmax support the use of FDG PET as a modality for discriminating second primary lung tumours from metastases. Previously, multiple case reports and studies have been published presenting cases of unexpected synchronous primary lung tumours detected by FDG PET [8-11]. On the contrary, only few reports exist in which FDG PET contributes in determining the clonal origin of synchronous tumours [12,13]. The current available literature further supports our hypothesis that SUVs can differentiate tumours of common origin and with common biological behaviour (i.e. metastases) from those of separate clonal origin (i.e. multiple primary tumours). That is, FDG uptake has been reported to relate to several tumour characteristics, including histological subtype [14-18] and tumour aggressiveness [14,17,19].

FDG PET imaging is already extensively being used in patients with lung cancer for several purposes, including the diagnosis of recurrent disease, staging, prognostic stratification and radiotherapy planning [20-23]. Also, it has been shown to be an accurate modality to differentiate benign from malignant solitary pulmonary lesions. Furthermore, FDG PET can be used to monitor the response of non-small cell lung cancer to chemotherapy, radiotherapy and potentially to targeting of cell signalling pathways. The results presented implicate that the use of FDG PET might be expanded to the identification of early stage second primary tumours in patients with synchronous pulmonary lesions. The population studied was carefully defined by stringent inclusion criteria. By including only those patients for whom sufficient data for a definite diagnosis of second primary cancer were available, the validity of this study was strengthened. Additionally, conditions between the patient groups studied were equalized as much as possible by choosing one reconstruction method for all PET images, since this is known to affect the SUV. Our data were in concordance with the study of Dijkman et al. [24] with a total of 37 patients (21 metastatic disease, 16 second primary cancer) were included for analysis. The ΔSUV was significantly higher in patients with second primary cancer than in those with metastatic disease (58 vs. 28%, respectively, p<0.001). The area under the ROC curve was 0.81 and the odds ratio for the optimal cut-off was 18.4.

Several limitations to this study should be noted. First, this study has a small sample size. Second, diagnosis was made without histological confirmation in most cases of metastatic disease. In these patients, histopathology of the metastatic lesion was lacking, because the clinical presence of multiple lesions in a pattern typical for metastatic spread was considered sufficient for diagnosis of metastatic disease. If this study had been prospectively conducted, however, tissue for immunohistochemical and mutation analyses could have been sampled for all tumours, thereby assuring validity of diagnoses of both patient groups studied.

The results of this study suggest that measurement of the SUVmax using FDG PET images can be useful in differentiating metastatic disease from second primary cancer in patients presenting with synchronous pulmonary lesions. This non-invasive technique, which is standardly available in pre-surgically staged lung cancer patients, may increase costeffectiveness due to less cumbersome diagnostic procedures and more efficient identification of potentially curable second primary cancer patients. However, larger and prospectively conducted studies are warranted to confirm the consistency of these results and to test the accuracy of the SUVmax at the cutoff value proposed in this study.