We aimed to study lipid levels in pregnant women and their neonates according to the presence or absence of environmental tobacco exposure (ETS). The study was performed in 150 pair of mothers and neonates subjects who were divided into 2 groups: those who were exposed to ETS and those who were not. 300 blood samples were analyzed for total cholesterol, triglycerides, apolipoproteins A (Apo A) and B (Apo B), and C-reactive protein (CRP). Statistically significant differences were found in TG (60 ± 229 vs. 46 ± 204 mg/dl) and Apo A (30 ± 213 vs. 33 ± 192 mg/dl) levels between the mothers in the case group and the control group (p=0.036 and p=0.02, respectively). Apgar scores in neonates of mothers exposed to ETS were significantly lower (8 ± 1) than those for neonates of mother not exposed (9 ± 0.5) (p=0.038). Expose of pregnant women to ETS causes significant increases of their serum triglyceride and Apo A, while also increasing serum CRP and decreasing Apgar scores in their neonates.

Many studies have asserted that smoking during pregnancy is unsafe for women and poses risks such as low birth weight, respiratory, and mental health problems (e.g., cerebral palsy, mental retardation, and learning problems) to the fetus. It also increases the risk of infertility in women and causes ectopic pregnancy (i.e. pregnancy outside the womb), miscarriage, and placental abnormalities. Fetuses of smoking mothers are two times more prone to sudden infant death syndrome (SIDS). Neonates of mothers who smoke during pregnancy are at increased risk of respiratory problems such as asthma, and most of them have learning difficulties and behavioural problems too [1].

There are several studies on the harmful effects of smoking or exposure to smoke during pregnancy. The consequences of breathing second-hand smoke during pregnancy include an increased rate of spontaneous miscarriage, pre-term delivery, placental, placenta previa, growth restriction, premature rupture of membranes (PROM), and stillbirth. Second-hand smoke breathed in during pregnancy also increases morbidity and mortality in newborn babies. In addition, the rates of developmental disorders, chronic heart disease, diabetes, cancer, and reproductive disorders increase [3,4]. Furthermore, several meta-analyses and review studies have shown that exposure to second-hand smoke chronically increases the incidence of cardiovascular disease by 30% [5,6]. This increased risk is due to the inflammatory effects of impaired vascular endothelium function, platelet aggregation, lipid peroxidation, and changes in C-reactive protein (CRP) [7-9]. Another factor that may increase the risk of cardiovascular diseases in those who breathe in second-hand smoke is its impact on the lipids and lipoproteins. Tobacco smoke boosts oxidative modification of low-density lipoprotein (LDL), leading to increases in oxidized LDL (Ox-LDL) in the bloodstream [5,10,11]. On the other hand, epidemiologic studies have shown that cigarette smoke decreases high-density lipoprotein (HDL) and changes LDL/HDL and triglyceride/HDL ratios [6,12,13]. These changes in lipid profile, particularly the changes in HDL/cholesterol ratio, make those who breathe in second-hand smoke particularly prone to cardiovascular diseases [14]. Nutraceuticals and functional food ingredients that are beneficial to vascular health may represent useful compounds that are able to reduce the overall cardiovascular risk induced by dyslipidaemia by acting parallel to statins or as adjuvants in case of failure or in situations where statins cannot be used [15].

This case-control study was performed in 150 mothers who were divided into two groups: those exposed to cigarette smoke and those not exposed. Each mother had a newborn baby; there were 75 new born infants in both the exposed and the non-exposed groups. Therefore, there were 300 subjects in four groups (mothers exposed to tobacco smoke; mother not exposed; neonates of mothers exposed to tobacco smoke; neonates of mothers not exposed). Total cholesterol, TG, apolipoprotein A (Apo A), apolipoprotein B (Apo B), and CRP quantitative analytical tests were performed after blood samples obtained from the umbilical vein of each subject and control subject were sent out to the laboratory for analysis.

Place of the study

This study was performed under the supervision of Ahvaz Jundishapur University of Medical Sciences, Ahvaz, Iran after obtaining the required permissions in 2014.

For inclusion in the study, mothers had to have brought a pregnancy to term. Daily cigarette smoke exposure during pregnancy had to be at least 30 minutes. Mothers could enroll if they gave birth to a single infant (that is, were not multiparous).

Exclusion criteria were as follows: history of lipid-lowering drugs in the mother; maternal history of diabetes, thyroid disease, heart disease; history of heart disease in the father; death before the age of 40 in genetically related family members; pre-term birth; twin or multiple pregnancies; infants who were small for their gestational age.

Participants provided signed and informed consent; voluntary participation and confidentiality were guaranteed. No data were missing. The study was approved by the Ethics Committee of Ahvaz Jundishapur University of Medical Sciences).

In this study, mothers with a history of cigarette smoke exposure were selected as the case group, while nonexposed others were placed in the control group. The control and case groups were matched in terms of gestational age, infant sex, maternal age at pregnancy, and the number of pregnancies. To increase the quality of the study, a one-to-one ratio was considered for the control/case groups. Immediately after birth, 5 ml of blood was aspirated from the umbilical vein. The blood samples were sent to the laboratory and stored in a freezer at – 20°C after serum separation. They then were transferred to the reference laboratory of the university and stored in a freezer at –70°C.

Cholesterol was measured enzymatically in serum or plasma in a series of coupled reactions that hydrolyzed cholesteryl esters and oxidized the 3-OH group of cholesterol.

To calculate the blood fats, TG was measured using an enzymatic method. In this technique, TG was converted into glycerol and fatty acid by the lipase enzyme and glycerol was measured in the course of the reactions.

HDL was measured using an enzymatic colorimetric method in which all kinds of lipoproteins (except HDL) were bonded with the substances added to the serum. Those substances were not added in the next stage of the test and non-bonded HDL was measured. Friedewald’s formula was used for LDL when TG was lower than 400 mg/dl (LDL=total cholesterol – (HDL + TG/5). In addition, with TG higher than 400, the direct method using the LDL kit as the basis of enzymatic method was used for measurement. All experiments were performed using the Hitachi 911 Auto-Analyzer (made in the United States).

The analysis was carried out with SPSS software program version 17. Continuous variables were described with mean ± standard deviation, and qualitative variables were expressed as percentages. Independent t-tests were used to compare mean of continues variables. A p-value of 0.05 or lower was deemed to indicate statistical significance for all tests. 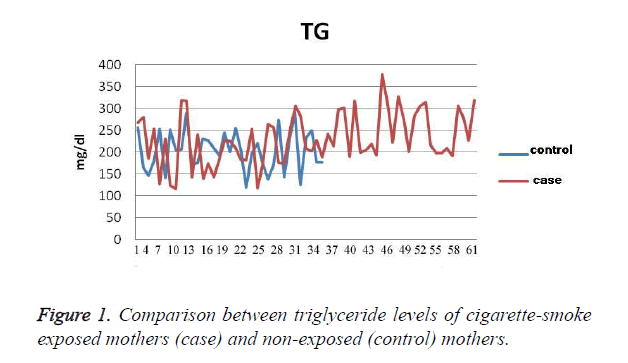 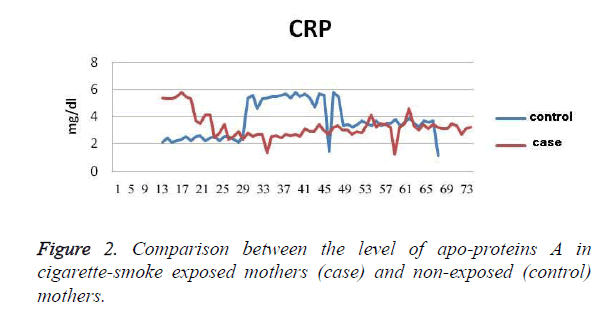 Figure 2. Comparison between the level of apo-proteins A in cigarette-smoke exposed mothers (case) and non-exposed (control) mothers.

Table 1. The Difference between Variables in Exposed and Nonexposed Mothers. 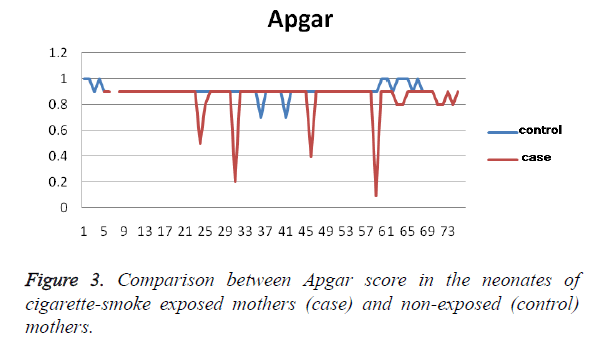 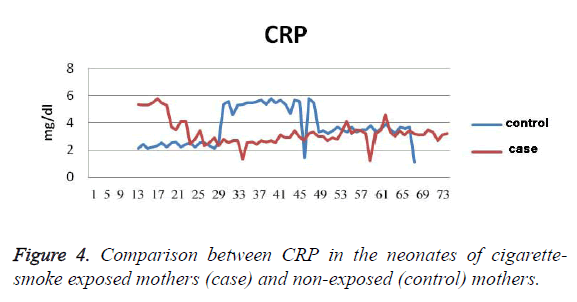 Figure 4. Comparison between CRP in the neonates of cigarette-smoke exposed mothers (case) and non-exposed (control) mothers.

Table 2. The Difference between Variables in Exposed and Nonexposed Neonates.

The valuable and newly reported point of this study is the significant difference between the Apgar scores of neonates in the case group and those of the control group, indicating that this score has been higher in the former population at the time of delivery. These findings are in agreement with those of Wdowiak et al. [17], in that the mean Apgar score of newborn infants in exposed mothers was lower than that in non-exposed mothers. In contrast, these results are in disagreement with those of Rodriguez and Lopkan, who reported no difference between the Apgar score of newborn infants of those two groups in the 1st and 5th minutes after birth [18].

Testing of the blood of the neonates of exposed mothers during pregnancy for specific items that would potentially be expected to be impacted by maternal exposure to cigarette smoke did not show any significant differences in cholesterol, triglyceride, total bilirubin, Apo A, and Apo B between the two groups. Comparison to other studies was not possible because no similar studies were found on this subject.

In addition, results from this study showed that the TG levels in pregnant mothers exposed to cigarette smoke was higher than in the control group. These findings were similar to those of another study that concluded that TG levels increased slightly in pregnant mothers exposed to cigarette smoke [19]. However, our study was not in concordance with Whig et al. with respect to cholesterol levels in pregnant mothers; our study showed a significant difference caused by exposure to tobacco smoke, whereas Whig and colleagues did not. Moreover, the levels of Apo A and Apo B were far higher in exposed mothers group than in the control group. This investigation was the first of its type to these authors’ knowledge, and further studies are required to confirm its results and etiologic justification.

In this study, it has been demonstrated that birth length in the neonates of the control group was shorter than in the case group. Although this difference was not statistically significant, it seems that the results are in disagreement with those of Luciano et al. [20], which found that newborn infants had a shorter birth length in mothers exposed to tobacco smoke.

This study showed that exposure to tobacco smoke did not have a significant impact on neonatal blood factors with respect to lipids or CRP, but that there is a moderate impact in mothers. Additionally, there was not a significant impact on head circumference or body length. Further comparisons on the level of apo-proteins A and B between the exposed mothers and non-exposed mothers, as well as their neonates, are recommended for etiological justification of the findings of this study. Additionally, quantitative testing of other health-related items that may be adversely impacted by exposure to cigarette smoke is recommended for future studies.

The expense of this thesis has been provided by the credit of the approved research project no u- 90249. And all right of this thesis is reserved for Ahvaz Jundishapur University of Medical sciences.