The aim of the study was to assess the management of INR therapeutic range as an estimate for achieving therapeutic outcome and estimate sub/supra-therapeutic INR's among physician versus pharmacist-led clinics. Articles were searched in: PubMed, Cochrane, Springer, Science Direct, and Wiley. The search was limited to the English language from 2010 to 2016. The inclusion criteria of the articles keywords such as warfarin, management, pharmacist, physician, therapy, clinic, and anticoagulation were used and GRACE guideline was used to assess the quality of these research articles. A total of 1050 articles were found with the relative subject, after excluding the duplicates more than 50% have been excluded, following the title and reviewing the abstract another 133 (12.67%) were ruled out, and 6 studies were included in the systematic review. In multiple studies pharmacist-Led coagulant clinic showed better outcomes with warfarin anticoagulant therapy. Patients exhibits high satisfaction levels and least warfarin induced complications in comparison with those results obtained with physician-led clinic. It is found that patients-oriented care has not been reported in the retrieved literature, which might open a room for researcher to determine the impact of services provided by pharmacists on individual patient-centered outcomes.

Warfarin was first introduced to the healthcare system in 1950 as Coumadin sodium [1] for the management of Atrial Fibrillation (A-Fib), mechanical prosthetic heart valves, Deep Vein Thrombosis (DVT), coronary artery disease and stroke [1,2]. Warfarin exhibits serious adverse effects due to its Narrow Therapeutic Index (NTI) [1] which might be life threatening due to the high individual variability in doserelated response [3]. Patients’ risk to substantial bleeding due to over warfarinization as well as persistent clotting events as in case of stroke or pulmonary embolism with sub therapeutic warfarinization [4]. Altered warfarin pharmacokinetics and International Normalized Ration (INR) are factorized [5] by widely variable parameters such as eating habits, concurrent medications [5], disease status and herbal products [1]. Thus pharmacists play a vital role in the management, education, and counselling the patient to prevent the warfarin related emergency room visits [6]. Evidence also indicated that a pharmacist managed anticoagulation clinics will jeopardize to least to no side effects [7]. At present several hospitals have either contributed a pharmacist into their family clinic or have a pharmacist-led clinic, focusing toward more patient-centered care [8].

The aim of the present study was to assess the management of INR therapeutic range and estimate sub/supra-therapeutic INR's among physician versus pharmacist-led clinics and evaluation of the patient-oriented services to identify which one of them is more appropriate to be more patient-oriented that matter.

Anticoagulant: Warfarin is the drug of choice as a stand-alone anticoagulant therapy for patients.

Pharmacist-led clinic vs. physician: studies focus on either pharmacist managed clinic and/or physician managed clinic to see how both groups are achieving respective clinical outcomes.

Articles were searched in: PubMed, Cochrane, Springer, Science Direct, and Wiley. The search was limited to the English language from 2010 to 2016. Due to the inclusion criteria of the articles keywords such as warfarin, management, pharmacist, physician, therapy, clinic, and anticoagulation were used. For example, the PubMed research method was written as follows: (warfarin management), (anticoagulant management), (pharmacist and physician management).

Abstracts were screened to exclude studies that don’t involve the following research criteria. Eligible studies were further reviewed for its quality (study design, length of study, intervention done, how they assessed the results and follow-up procedure). Patient characterization was also evaluated regarding age and indication of anticoagulation.

Good Research for Comparative Effectiveness (GRACE) checklist is an 11-item checklist that was developed and used to review observational studies for quality and use-fullness in decision making [9]. The eleven items are categorized into two groups, the data and recording of the measurements, and the method, that was concerned in the study population and comparison between the groups [9].

A total of 1050 articles were found to be relative to the subject, after excluding the duplicates>50% have been excluded. Following the title and reviewing the abstract another 133 (12.67%) were ruled out, and 6 studies were included in the systematic review. The study flowchart is presented in Figure 1 and inclusion characteristics of articles are shown in Table 1.

Table 1: Summary of the articles included in the research. 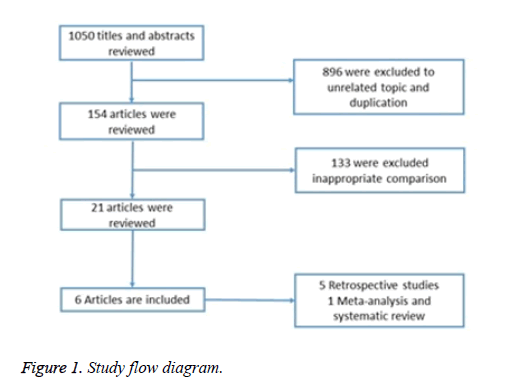 Not all the studies have included naïve participants [4,10-13] except only one [3]. Necessary information were recorded and stated objectively (therapeutic INR, supra-therapeutic INR, and sub-therapeutic INR), and few among them have shown missing data required to standardize measurements [3,11]. All the studies included have parallel groups and standard measured time and variables (Table 2).

Table 2: Quality assessment of the articles using the GRACE checklist.

However, in 2013 Gupta et al. had contrasting results, revealing that a physician-led clinic patients INR was scattered outside the therapeutic INR range more than those reported for the pharmacist-Led clinic.

This systemic review aimed to evaluate the effectiveness of pharmacist-led clinic compared to a physician-led clinic in the last 10 years. The results showed that the pharmacist-led clinic achieved better clinical outcomes than physicians in anticoagulation control among patients using warfarin, manifested by most of the INR results that achieved within the targeted therapeutic range, thus prevails the primary objective of the study.

Similar findings were reported in several publications, Rudd et al. [14] reported that that the pharmacist-managed services had yielded a better anticoagulation control; contributing to reduction in the burden of hospitalization and emergency department visits [14]. Similarly another research confirmed the usefulness of the pharmacist intervention; as a result of reduction of the time required for anticoagulation monitoring and significant improvement in the QOL of the patients’ [15].

However, a recent research article reported that there is no difference between the pharmacist managed practice and the physician's management towards safety and effectiveness when using the same guidelines with regard to in time within INR therapeutic range. The only difference found between both groups revealing that the pharmacist management used less INR testing which might improve cost-benefit over physician-led clinic [16].

The literature suggested high prevalence of achieved targeted therapeutic INR with increased satisfaction, and reduced both diagnostic cost and supra-therapeutic INR among patients with Pharmacist-Led clinic [7,10,13,14]. This could have attributed to pharmacist's knowledge on drug/herb interactions and drug dosing and monitoring [1,16]. All the research articles included in the present assessment concluded that the pharmacist-managed clinic is certainly a better option than physician. There was no study among those six that focused on patient-oriented care aspects. There were two studies discussed the patient satisfaction and confidence for better control on warfarin therapy [10,13]. Two studies also reported that the clinical pharmacists adjust the dose according to an established evidence based protocol, however the physician is usually influenced by his/her experience and clinical judgement. The physician changes the warfarin dose solely depending on the INR results with no further information on the patient health status. In contrast, the pharmacist-led services educate the patient on warfarin6, evaluate health status, life style changes, missed or added doses by mistake, diet management and concomitantly administered medications [1,5]. It is also reported that pharmacists are more capable to counselling techniques in community setting which will increase the therapeutic adherence and improve efficacy among patients with warfarin use [2,12].

Clinical pharmacists have an intensive training on anticoagulation management, focusing on handling the patients concerns and views on warfarin, making the patient more confident, satisfied and health-seeking behavior with pharmacists compared to physician [2].

Pharmacist-led clinic showed better outcomes with warfarin anticoagulant therapy in multiple studies. Patients exhibits high satisfaction levels and least complications compared with Physician-led clinic. It was found that patients-oriented care had not been reported in the literature, opening a room for researcher to determine the impact of pharmaceutical services on patients' outcomes.

Obtaining the physicians data was a major hindrance to the authors and to the pharmacist himself. Not all studies had achieved the accuracy of collecting the data [3,11]. The small group size [4] might lead to a false statistical significance and the short term of follow-up [12]. Several studies had no data to compare their INR results at pre-post levels.