India has acquired the label of aging nation with 7.7% of its population being more than 60 years old .There has been a sharp increase in the proportion of elderly popula-tion in India as a result of demographic transition [1]. The proportion of elderly persons in the population of India rose from 5.63 per cent in 1961 to 6.58 per cent in 1991[2] and to 7.5 per cent in 2001and it has been esti-mated that they would become 12% of total population by 2030[3].This is attributed to decrease in mortality arising from longer lifespan of individuals and improvements in public health and medical services leading to control of infectious diseases. The rapidly increasing aging popula-tion adds to the socio economic challenges that face India [2,3]. The scientific progress has reached a level where nutritional interventions may play a part in the prevention of degenerative conditions of age, improvement of quality of life and impact on health care burden and resources. Moreover a timely intervention can stop weight loss in elderly at risk of malnutrition or undernourished [4].Evaluation of nutritional status is important for any nutrition or dietary modification. We therefore did a com-parative study to evaluate the nutritional status of elderly living at old age homes and in community, in the city of Mangalore combining anthropometry and mini nutritional assessment. Nutrition screening of older adults is ex-tremely difficult; the shortcomings of existing screening tools do not make the problem any easier [5].Some of the screening methods can only be administered by trained clinicians. Biochemical markers are time consuming and expensive to use in home situations, and the criteria for their interpretation in old age are unclear [6].A compre-hensive tool specifically developed for use with elderly people is the Mini-Nutritional Assessment (MNA): this is a rapid and simple tool for evaluating the nutritional state of the frail elderly, which allows, if necessary, for nutri-tional intervention and/or diet modification[7].The MNA is a test composed of 18 simple and rapid easy to measure items which can be performed in less than 15 minutes. (Table 8)[8]. The MNA has been validated in three suc-cessive studies of more than 600 elderly [7]. The MNA detects risk of malnutrition before severe change in weight or serum proteins occur [4].

Table 1: Distribution of subjects according to residence and gender

Table 3: Assessment of Malnutrition according to Mini Nutritional Assessment

Table 5: Distribution of subjects according to co-morbid illness

Table 6: Correlation coefficients for MNA score according to residence 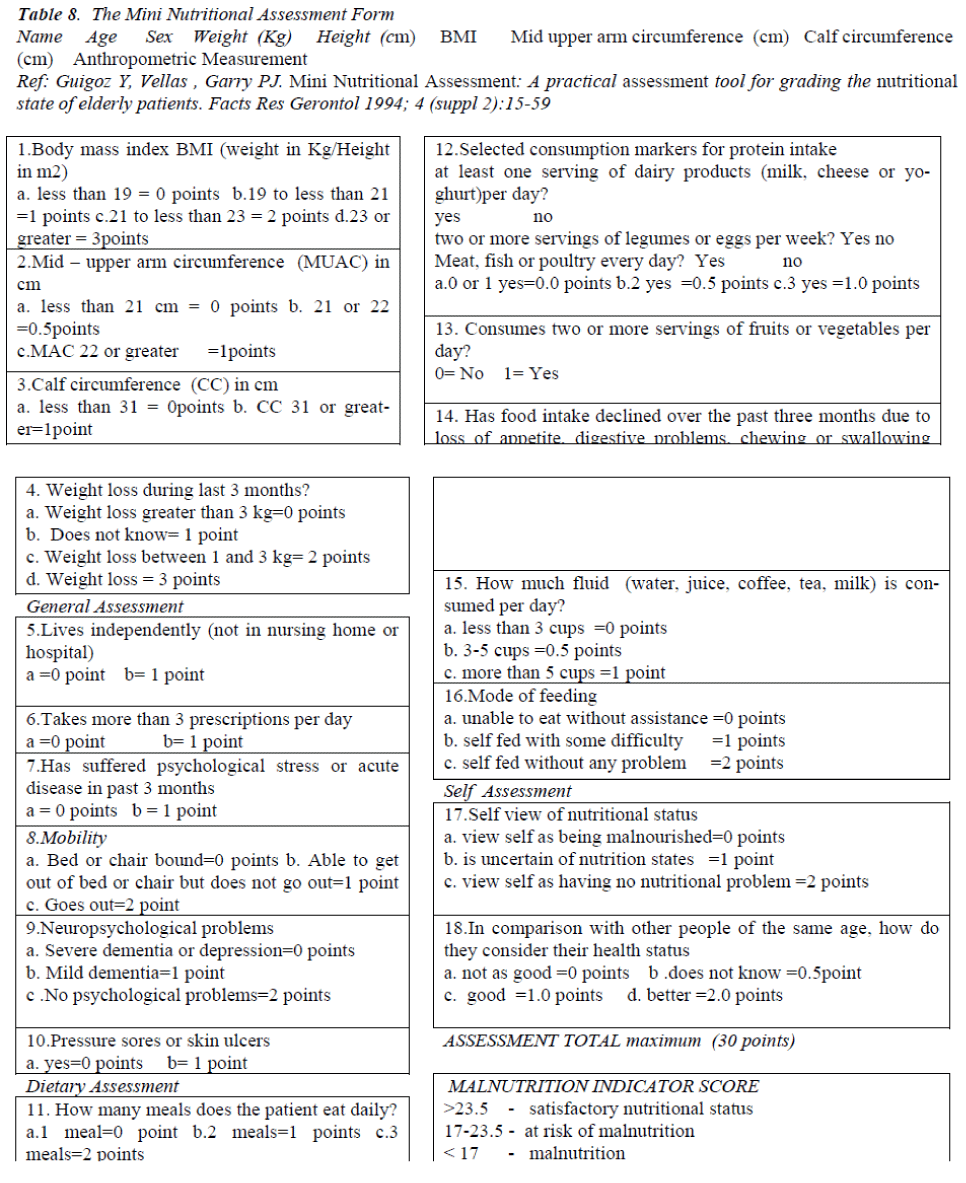 A total of 210 subjects above 60 years of age were studied over a period of 30 days. As it was a time bound study, those elderly subjects available during the limited time period were included. The study subjects were constituted by 108 inmates of old age homes and 102 people who were residing at their houses. The standard informed con-sent was taken from all the subjects following approval from the college ethics committee. The old age home in-mates were studied from Abhaya Ashram at Kodialbail, Prashanti Nivas Jeppu, Geriatric ward of Kasturba Medi-cal College, Mangalore. The members of KMC Ashraya were also included in this study. KMC Ashraya is an or-ganization within KMC, working for the welfare of senior citizens, and physically disabled.

Subjects over 60 years of age were included in this study as this is the geriatric age group as defined by the World Health Organisation.

A detailed history was taken and clinical examination was done for each subject.

Persons with chronic illness (diabetes, hypertension, COPD) were categorized into the co-morbidity group. Every subject under study was individually assessed for nutritional status with anthropometry and Mini nutritional assessment.

Waist-Hip ratio >1.0 in men and >0.85 in women have a greater risk of stroke, coronary artery disease and diabetes mellitus [9].Accordingly the W/H ratio of the elderly sub-jects were divided into normal or at risk groups. Mini nutritional assessment-

The test involves (1) anthropometric assessment (weight, height, mid arm and calf circumferences, weight loss) (2) general assessment (six questions related to lifestyle, medication and mobility) (3)dietary assessment (eight questions related to number of meals, food and fluid in-take, and autonomy of feeding); and (4) subjective as-sessment (self perception of health and nutrition). The test did not require any modification to be applied in the study population. A score was given to each subject on the basis of MNA questionnaire. The scoring categorizes the eld-erly subjects in the following manner.

The data were analysed using SPSS for windows version 15 (Bangalore). A p value of less than 0.05 was consid-ered to be statistically significant.

Out of the total 210 elderly population studied, 108 sub-jects were inmates of old age home and 102 subjects were residing at their houses. Table 1 shows the distribution of elderly subjects according to residence and gender. The age and anthropometric measurements of the subjects according to the residence are depicted in Table 2. The mean MNA scores of the subjects were higher in the sub-jects at home compared to those in old age homes (p<0.001). The prevalence of malnutrition was 2.0% in the free living elderly and 19.4% in old age home resi-dents (by MNA) (Table 3).Age wise prevalence of mal-nutrition is shown in Table 4. Table 5 gives the distribu-tion of elderly subjects according to co morbid illness. There was no significant difference between at risk, mal-nourished and well-nourished groups (p=0.397 at old age home, p=0.197 at home). Total MNA scores positively correlated with mid upper arm circum-ference both in old age home residents (r=0.472,p=0.001) and in residents at home. (r=0.32,p=0.001).There was significant positive correlation between MNA scores and calf circumference in both the groups (r=0.521,p<0.001 in old age home subjects, r=0.38,p<0.001 in subjects at home).With BMI there was significant correlation only with elderly at old age home (r=0.299,p<0.002).There was no correlation of MNA scores with age. (Table 6).The waist hip ratio was at risk in 47% of subjects in old age home and 60% in elderly at home. The difference was statistically different (p<0.027) (Table 7). 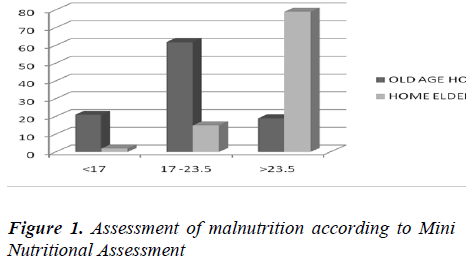 Figure 1: Assessment of malnutrition according to Mini Nutritional Assessment

In the present study the prevalence of malnutrition was 2.0% in the free living elderly and 19.4% in old age home residents (by MNA) (table 3).The prevalence of malnutri-tion in free living elderly is similar to that found by Soini et al [10] but less than in Maliheh et al[11]. In old age home residents, the number of people who were malnour-ished is less than in Souminen et al [12] more than Lan-giano et al [13]. According to MNA, those at risk of malnutrition were 57.4% in old age home residents and 14.7% in free living elderly subjects. Thus 76.8% subjects in old age home were either malnourished or were at risk of malnutrition. Even without an acute or chronic disease, the composition of body changes with age [14].Loss of muscle mass starts in the middle of adulthood and contin-ues through old age. A dietary nutrient deficit with lower energy expenditure is associated with decreased weight and height in the elderly [15,16].The decreased height in elderly is also result of shortening of spinal column with associated osteoporosis and kyphosis [17]. The nutritional status is independent of associated co morbid illness (ta-ble 5).So aging perse with decreased nutrient intake and lack of exercise would have resulted in lower BMI (table 2) and increased risk of malnutrition in elderly at old age home.

The significant difference between the triceps skin fold thickness of the two groups might indicate towards lesser nutritional status in old age home residents (table 2). The mean value of waist circumference in free living elderly and old age home residents was 78.5 and 66.1 respec-tively (table 2).The difference was statistically very highly significant. The waist –hip ratio of elderly at home were more at risk compared to old age home residents (table 7).This may predispose the elderly at home for trunkal development of metabolic syndromes. Sibai et al showed that elderly living at home had significantly higher waist circumference and mean body mass index than those living in institutions [21]. Prospective studies of Gotherburg, Sweden have shown that both men and women who have a high Waist-Hip ratio have increased risk of death, stroke, IHD, Diabetes mellitus, Hyperten-sion and Hyperlipidemia [22].According to Gill et al Waist Hip Ratio was positively related to circulatory mor-tality in both men and women [23].

1. Undernutrition as well as obesity are common health hazards in our geriatric population.

2. The prevalence of malnutrition (by MNA) is sig-nificantly higher in inmates of old age home com-pared to elderly at home.

3. Mini Nutritional Assessment appears to be a prac-tical and reliable method to assess the nutritional status of elderly people and more importance should be attached to those living in old age / nurs-ing homes to prevent their nutritional problems.

4. The elderly at home are posed at greater risk of health problems resulting from obesity.