hypertension-13544.html'>Hypertension or prehypertension are the diseases which affect entire body. Many times there would have been organ damage even before the diagnosis of hypertension. So it becomes very essential to diagnose hypertension or rather prehypertension at an early stage so that the preventive measures can be employed. Heart rate variability (HRV) proves to be the best tool to diagnose prehypertension at early stage. The aim of this study was to record HRV in offsprings of hypertensive parents and offsprings of normotensive parents and compare the results between the two groups. A cross sectional study was done in I MBBS students (2011-2012) of S.Nijalingappa Medical college, Bagalkot, Karnataka, India. 20 cases were obtained and were matched with 20 controls, HRV was recorded in both the groups using polyrite and analysed for time and frequency domain parameters. Statistical analysis was done by Unpaired t test using EPI-info software. The time domain parameters were found to be decreased in cases but were not statistically significant. Low frequency domain (LF) was higher and high frequency domain (HF) was lower in cases when compared to controls and the difference was statistically significant. The LF/HF ratio was also higher in cases and was statistically significant. There is increased sympathetic drive and decreased parasympathetic drive in cases when compared to controls indicating autonomic imbalance in the predisposed group. So if detected earlier, preventive measures can be undertaken to prevent prehypertension and subsequently hypertension in them.

hypertension-13544.html'>Hypertension runs in families, and parental history of hypertension increases the risk of developing hypertension, especially if both the parents are hypertensives [2].

However, till date, not much work has been conducted to understand the nature of autonomic imbalance that facilitates the normotensive offspring of hypertensive parents to enter into a stage of prehypertension or hypertension. A recent report suggests that increased sympathetic and decreased parasympathetic activities in young adults alters the sympathovagal balance, which could be the major mechanism in the causation of prehypertension [3].

Spectral analysis of Heart rate variability has been recently used as sensitive tool for assessment of autonomic dysfunctions in various clinical disorders [4] At present spectral analysis of beat to beat cardiovascular variability has been a novel method in the assessment of risk in primary hypertension [5,6]. At present HRV investigation has superseded classic test for autonomic function because it quantifies sympathetic and parasympathetic activity [7,8].

The present study was conducted on healthy normotensive subjects who studying in 1st year of MBBS( aged between 18 to 22 years) in S.Nijalingappa Medical College, Bagalkot, Karnataka, whose parents are hypertensive, either father or mother or both being hypertensive. Ethical clearance was obtained from the institutional ethical clearance committee.

The control group consisted of healthy normotensive subjects who are studying in 1st year of MBBS (aged between 18 to 22 years) of same college, whose both the parents are normotensive. The sample size worked out to be 20 i.e. 20 cases compared with 20 controls.Those who are known to have any cardiovascular or cardio respiratory disorders or any disease known to alter the cardiovascular hemodynamics are excluded from the study.

The subject was asked to come to the cardiovascular laboratory in S.N.Medical College, Bagalkot and asked to relax for 10 minutes. The subjects were briefed in detail about the experimental procedure. Written informed consent was taken from the subjects. Height in meters and weight in kgs were measured and BMI calculated. Baseline blood pressure was measured with sphygmomanometer. Then the ECG recorded for 5 minutes in lead II using powerlab, AD instrument polyrite which is data acquisition system and the Heart Rate Variability analyzed with respect to time and frequency domain.

Table 1: Data of base line characters.

LF/HF ratio in cases was 2.8±1.09 and in controls was 2.1±1.02. The ratio was found to be higher in cases and the difference was statistically significant. The results are shown in Figure 1. 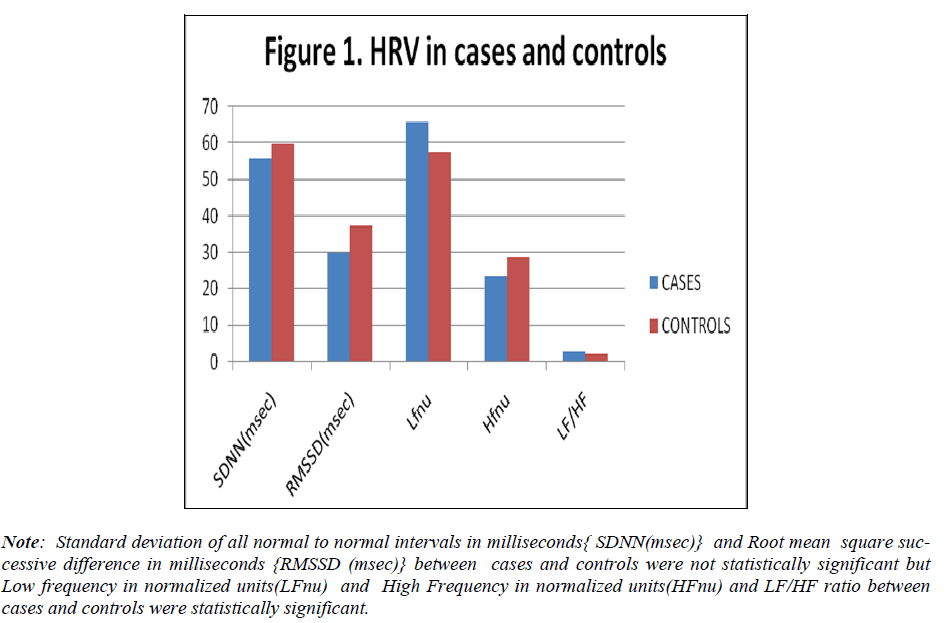 Figure 1: Standard deviation of all normal to normal intervals in milliseconds{ SDNN(msec)} and Root mean square successive difference in milliseconds {RMSSD (msec)} between cases and controls were not statistically significant but Low frequency in normalized units(LFnu) and High Frequency in normalized units(HFnu) and LF/HF ratio between cases and controls were statistically significant.

Our study showed us that there is increased LFnu and decreased HFnu and increased LF/HF ratio along with decreased SDNN in the study group i.e. normotensive offsprings of hypertensive parents when compared with controls i.e. normotensive offsprings of normotensive parents. These findings indicate that there is increased sympathetic activity and decreased parasympathetic activity in the study group when compared with the control group. Similar results have been reported by other investigators [3,9].

Either HF in power or HFnu is the direct representation of vagal tone. Vagal tone is an important determinant of cardiovascular health. Vagal tone of an individual has insightful influence on the heart rate, cardiac output and blood pressure. Any reduction in the HF power and/or HFnu indicate decreased vagal activity [9]. In the present study HFnu was found to be significantly less in the study group when compared to control group. So our study shows early cardiovascular vagal changes in the study group.

SDNN represents the long term vagal modulation of cardiac functions. A lower SDNN indicates diminished baroreflex modulation of RR intervals. In our study though there was decrease in SDNN, it was not statistically significant. Decreased SDNN along with decreased HF would indicate poor vagal control in the study group.

There was decreased RMSSD in the study group when compared with the control group. RMSSD reflects vagal modulation of heart rate, and therefore RMSSD is considered as an important short term indicator of parasympathetic drive [7].

So the present study reveals that incidence of prehypertension and the risk of cardiovascular dysfunction linked to their degree of sympathovagal imbalance is more in the offsprings of hypertensive parents than in the offsprings of normotensive parents. Sympathovagal imbalance in the form of increased sympathetic drive and decreased parasympathetic drive would lead to causation of prehypertension in these genetically predisposed individuals.

Though the baseline blood pressure values were normal in both the groups, it was by HRV the autonomic imbalance could be made out in the study group. So recording of HRV in the predisposed group becomes mandatory to prevent them from progressing to prehypertension and hypertension subsequently. As a preventive measure, the predisposed group i.e. offsprings of hypertensive parents should aim at decreasing the sympathetic drive and increasing their parasympathetic drive which can be achieved by slow breathing exercises [12,13].