Comparative structures and evolution of sterol-C5-desaturase (SC5D) genes and proteins: A major role in cholesterol biosynthesis.

Sterol-C5-desaturase (SC5D) (EC 1.14.21.6) (also designated as lathosterol oxidase, lathosterol dehydrogenase and lathosterol desaturase) (SC5DL; S5DES; ERG3) is a membrane-bound enzyme in liver and other tissues of the body which catalyzes the penultimate reaction in the cholesterol biosynthetic pathway, converting lathosterol into 7-dehydrocholesterol by introducing a C5-6 double bond into lathosterol [1-3]. Mutations of the human SC5D gene may result in the Smith-Lemli-Optiz syndrome, which is a frequently occurring autosomal recessive developmental disease resulting in mental retardation, facial dysmorphisms, and other congenital anomalies, as well as the accumulation of cholesterol intermediates [4-7].

Structures for SC5D genes and cDNA sequences have been determined, including human (Homo sapiens) [3,8,9] and mouse (Mus musculus) [10,11]. Human SC5D spans 20.96 kbps, comprises 4 exons and is localized on chromosome 11 on the direct strand [12]. SC5D is broadly expressed in human and mouse tissues, with highest levels in liver and brain, where the enzyme contributes predominantly to cholesterol biosynthesis. Studies of Sc5d¯/Sc5d¯ knock out mice have shown that these mice were still born with elevated lathosterol and decreased cholesterol levels and exhibited craniofacial defects, including cleft palates as well as limb patterning defects [10].

BLAST analyseswere subsequently undertaken for each the predicted vertebrateSC5D amino acid sequences using the UC Santa Cruz web [25]. To obtain the predicted locations for each of the vertebrate SC5D genes, including predicted exon boundary locations and gene sizes. Structures for human and mouse SC5D isoforms (splicing variants) were obtained using the AceView website to examine predicted gene and protein structures [26].

The amino acid sequences for human (Homo sapiens) and mouse (Mus musculus) SC5D subunits and for other vertebrate SC5D subunits are shown in Figure 1. These alignments showed between 66-100% sequence identities, suggesting that these are products of the same family of genes and proteins (Table 1). In contrast, invertebrate SC5D sequences exhibited much lower sequence identities with the human sequence, with nematode (Pristionchus pacificus) and fruit fly (Drosophila melanogaster) SC5D sequences showing identities of 22% and 27% respectively with the human SC5D sequence (Table 1). The amino acid sequences for human and other mammalian SC5D enzymes contained 299 residues whereas other vertebrate and invertebrate SC5D subunits contained between 278 residues (fruit fly) and 305 (purple sea urchin) amino acids (Figure 1, Table 1). These differences were predominantly explained by changes in the number of C-terminal amino acids (Figure 1). 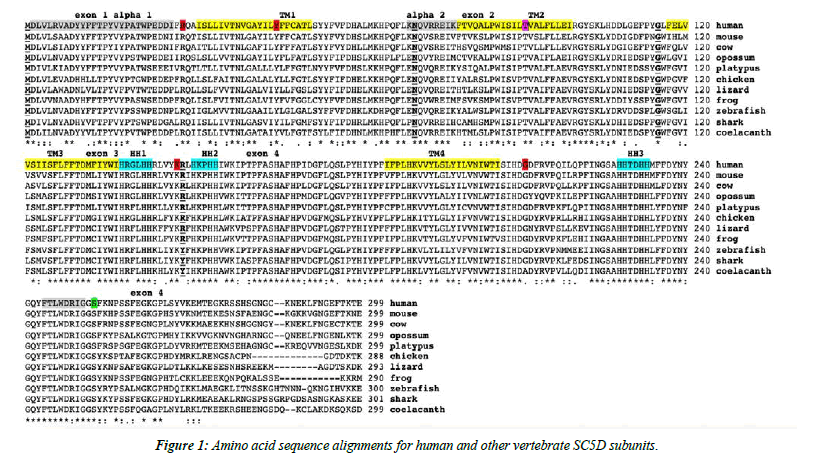 Analyses of predicted secondary and transmembrane structures for vertebrate SC5D sequences were examined which were consistent with four transmembrane regions (designated as TM1-4) and two alpha helical regions (alpha 1 and 2) (Figure 1 and Figure 2). Similar structures were observed for each of the vertebrate SC5D subunits examined. For human SC5D, the following secondary structures were observed: alpha helix 1 (residues 2-27); TM1 (36-58); alpha helix 2 (70-78); TM2 (79-101); TM3 (116-138); and TM4 (182-204), with intracellular locations predicted for inside (residues 1-34; 100-114; 205-299) and outside (58-76; 138- 181) the endoplasmic reticulum membrane (Figure 2). The active site for vertebrate SC5D is associated with conserved histidine regions (designated as HH1, HH2 and HH3) which were centrally located near TM3 and TM4. These residues are likely to play a role in providing ligands for a proposed catalytic Fe center for enzymes responsible for desaturating and hydroxylating reactions, such as SC5D; FA2H (fatty acid α-hydroxylase); and fatty acid desaturases (FADS1; FADS2; FADS3) [28-30]. Figure 3 shows the comparative putative histidine active site sequences for all vertebrate and invertebrate SC5D sequences examined demonstrating conservation of the following histidine residues (human SC5D sequence used): His138; His142; His151; His154; His155; His229; His232; His233, supporting an essential role for these amino acids in vertebrate and invertebrate SC5D catalysis. This proposal is further substantiated by site directed mutagenesis studies of Arabidoopsis thaliana Δ7-sterol-C5(6)- desaturase (5-DES) for which mutations of the corresponding active site histidine residues have generated 2-20% activity levels of the wild-type enzyme [28]. 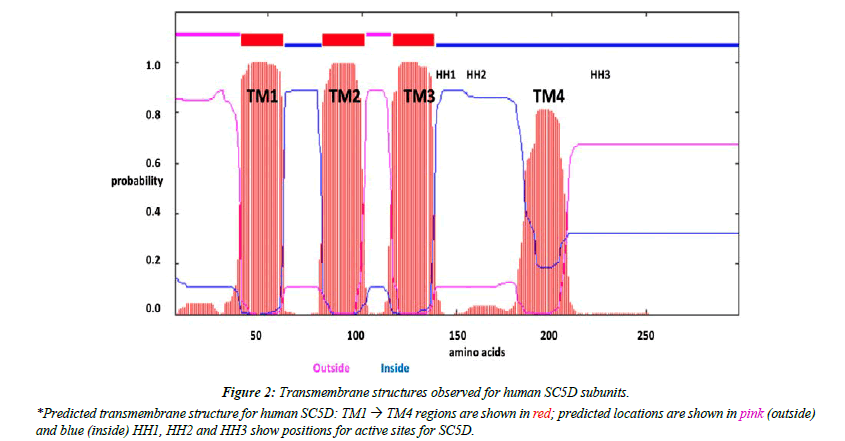 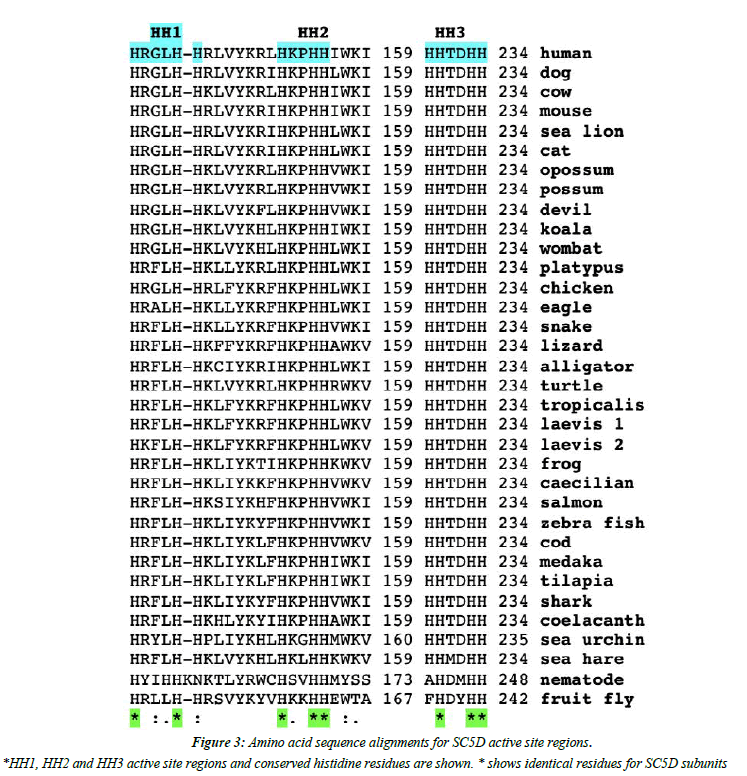 Gene locations and exon structures for SC5D genes and proteins

Figure 1 summarizes the predicted exon start sites for human, mouse and several other vertebrate SC5D genes with each having 4 exons, in identical positions to those reported for the human SC5D and mouse Sc5d genes [3,8,9]. The four transmembrane regions (TM1-TM4) were distributed within each of the encoded exons with the three putative histidine active site sequences positioned between exons 3 and 4 (HH1/ HH2) and after TM4 (HH3). Lathosterolosis, an inborn error of the cholesterol biosynthetic metabolic pathway, has been reported clinically in human and mouse genomes due to SC5D deficiency [7,10,31-33]. In human clinical studies of the impact of SC5D mutations, this condition has been described as the Smith-Lemli-Opitz syndrome (SLOS) [5]. resulting in the formation of abnormal sterols and chondrodysplasia punctata [6]. SLOS disease variants (also referred to as LATHOS variants) have been reported involving amino acid substitutions (29R→Q; 46Y→S; and 211 G→D), resulting in SC5D deficiencies [10,31]. Studies with Sc5d (-/-) mice have shown that the neonates were stillborn with elevated lathosterol levels, decreased cholesterol levels and craniofacial defects; Consistent with phenotypes reported for human SC5D defective gene patients [10,33]. and supporting an essential role for the SC5D gene in normal mammalian development (Figure 1). 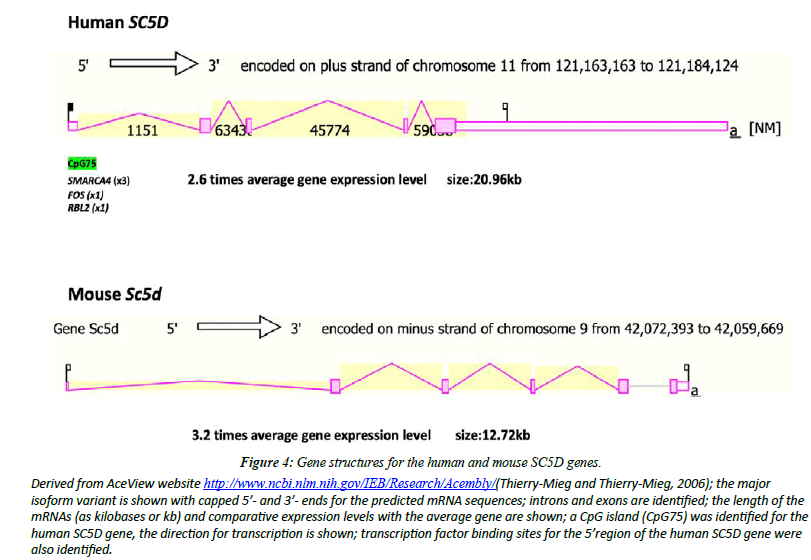 Figure 4: Gene structures for the human and mouse SC5D genes.
Derived from AceView website http://www.ncbi.nlm.nih.gov/IEB/Research/Acembly/(Thierry-Mieg and Thierry-Mieg, 2006); the major isoform variant is shown with capped 5’- and 3’- ends for the predicted mRNA sequences; introns and exons are identified; the length of the mRNAs (as kilobases or kb) and comparative expression levels with the average gene are shown; a CpG island (CpG75) was identified for the human SC5D gene, the direction for transcription is shown; transcription factor binding sites for the 5’region of the human SC5D gene were also identified. 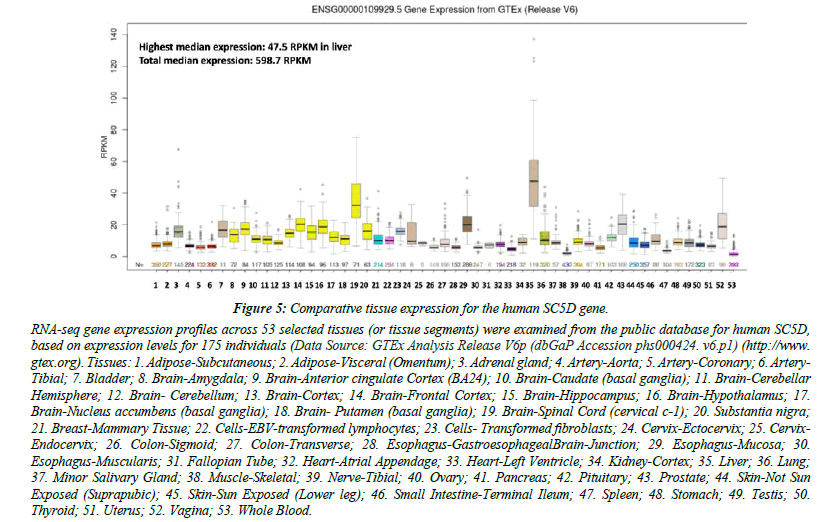 Phylogeny and divergence of vertebrate and invertebrate SC5D sequences

A phylogenetic tree (Figure 6) was calculated by the progressive alignment of human and other vertebrate SC5D amino acid sequences. The phylogram was ‘rooted’ with a coelacanth SC5D sequence and showed clustering of the SC5D sequences into several distinct vertebrate groups, including primates (human, baboon and marmoset); other eutherian mammals (ruminants, diving mammals, seals, rodents); marsupial and monotreme species); birds and reptiles; amphibians; fish; and a shark and a coelacanth species. In addition, Xenopus laevis SC5D1 and SC5D2 sequences showed clustering with the Xenopus tropicalis sequence examined, which is consistent with these genes being products of a recent duplication event during Xenopus evolution [20]. 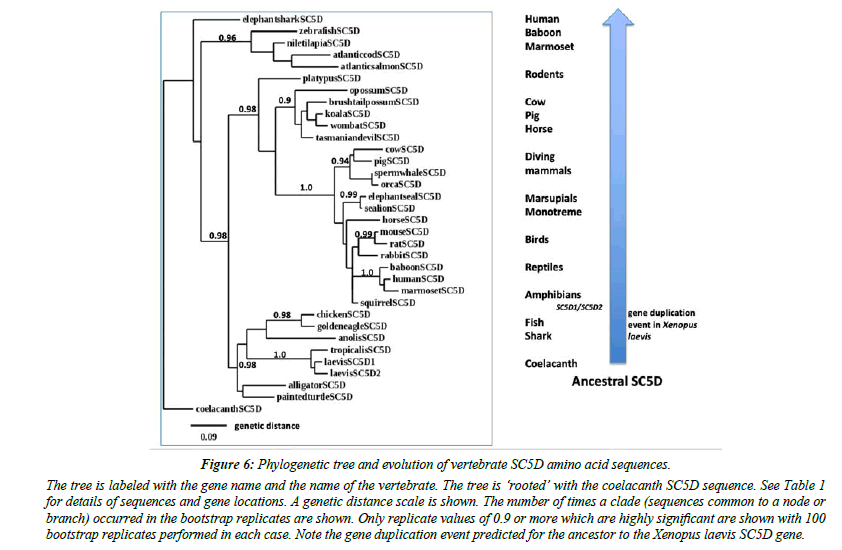 Figure 6: Phylogenetic tree and evolution of vertebrate SC5D amino acid sequences..
The tree is labeled with the gene name and the name of the vertebrate. The tree is ‘rooted’ with the coelacanth SC5D sequence. See Table 1 for details of sequences and gene locations. A genetic distance scale is shown. The number of times a clade (sequences common to a node or branch) occurred in the bootstrap replicates are shown. Only replicate values of 0.9 or more which are highly significant are shown with 100 bootstrap replicates performed in each case. Note the gene duplication event predicted for the ancestor to the Xenopus laevis SC5D gene.

In conclusion, the results of the present study indicate that vertebrate SC5D genes and encoded SC5D enzymes represent a distinct sterol desaturase gene and enzyme family which share key conserved sequences and structures with transmembrane structures and associated histidine boxes consistent with these serving as active sites and/or involved with metal ion binding. SC5D expression is highly expressed in liver and the spinal cord which may be facilitated by transcription factor binding sites, SMARCA4, FOS and RBL2, which are localized in the 5’ region of the SC5D gene on the human genome his study also reports that the Xenopus laevis genome contains at least two ‘SC5D-like’ genes (designated as SC5D1 and SC5D2), which were located in tandem on separate chromosomes (chr7S and chr7L) of the Xenopus laevis genome. Phylogeny studies using several vertebrate SC5D subunits indicated that SC5D genes have apparently appeared early in vertebrate evolution prior to the teleost fish common ancestor more than 500 million years ago.