In order to investigate the biomechanics of four types of skin injuries caused by different etiological factors, and to explore the healing characteristics of various injuries, twenty rabbits were randomly assigned into four experimental groups (n=5). Four types of injuries were made on the dorsum of the rabbits. Blood glucose concentrations were measured on day 0, 1 and 3. Tensile strength was measured using tensiometer. Body weights of the rabbits with excision skin wounds were 7.81% less on day 10 compared to that before wounding. Blood glucose concentrations on day 1 rose from 24.54% to 28.92%, with the maximum for frostbite and minimum for burn wound rabbits (P?0.05). Tensile strengths of frostbite rabbits were significantly greater than those of the burn rabbits (P?0.05). Daily mean healing velocities of the excision wounds, cauterization burns, scalds and frostbites were 0.18±0.10, 0.34±0.08, 0.33±0.11 and 0.42±0.16 cm2/d, respectively. Healing velocity in case of excised wounds was less than that of frostbites (P?0.05). Meanwhile, healing velocities in burns and scald groups were faster than that in the excision wound group (P?0.05). It was concluded that injuries could result in an increase in the blood glucose level. The excision skin wound obviously affected the rabbits’ growth and reduced healing velocity.

Injuries are a histologically structural decomposition of humans and animals caused by various traumatic factors, that lead to a series of changes in the traumatized areas and systemic reactions, including changes in the morphological, pathological, biochemical and biomechanical aspects [1,2]. Injuries can be divided into the physical injury, chemical injury and biological damage according to the nature of their etiologies [3,4]. Each injury involves quite a complex process of cellular and molecular mechanisms and also changes the features in histology, biochemistry and biomechanics [5,6]. The morphogenesis and repair mechanisms of injuries have been studied extensively on the skin due to their anatomical location, which allows easy access and observation, and their especial structure and functions [7]. Few studies, however, are devoted to different skin injuries in the same animals under the same conditions [8-10].

During the last three decades, investigators have been trying to analyze the chemicals in wounds in order to determine their conditions and fitness for closure. The focus has been on the characteristics of each injury [11,12]. However, comparative research on the repair processes of the different types of injuries and their biochemistry and biomechanics are still unknown [7,13-15].

This investigation is aimed to make a comparative study of the repair characteristics, blood glucose concentrations and tensile strengths of the four different types of skin injuries under the same experimental conditions, in rabbits, and to explore thoroughly the biochemistry and biomechanics of different skin injuries in human and animals to elucidate further the repair mechanism of various injuries.

After the hair was clipped and shaved, the dorsal chest was disinfected with 5% tincture iodine. Rabbits were anesthetized by injecting 0.2 mg/kg xylazine IM. 10 mL of 0.5% procaine hydrochloride was injected sc into the surgical region of each rabbit. In each EG-1 rabbit, using a scalpel, a piece of skin about 20×15mm2 size was excised to make a full-thickness skin excision wound model (day 0). Rabbits in EG-2 were cauterized for 10 sec with a broiling hot surgical blade to make Ⅲ° thermal cauterization burn model in the same region as mentioned in EG-1 (day 0). In the EG-3 animals, 5 mL boiling water was poured into the same region twice (day 0) to make the Ⅲ° scald model. 5mL liquid nitrogen (-196°C) was poured into the same region twice (day 0) to produce the Ⅲ° frostbite model. Fig 1. A, B, C and D. 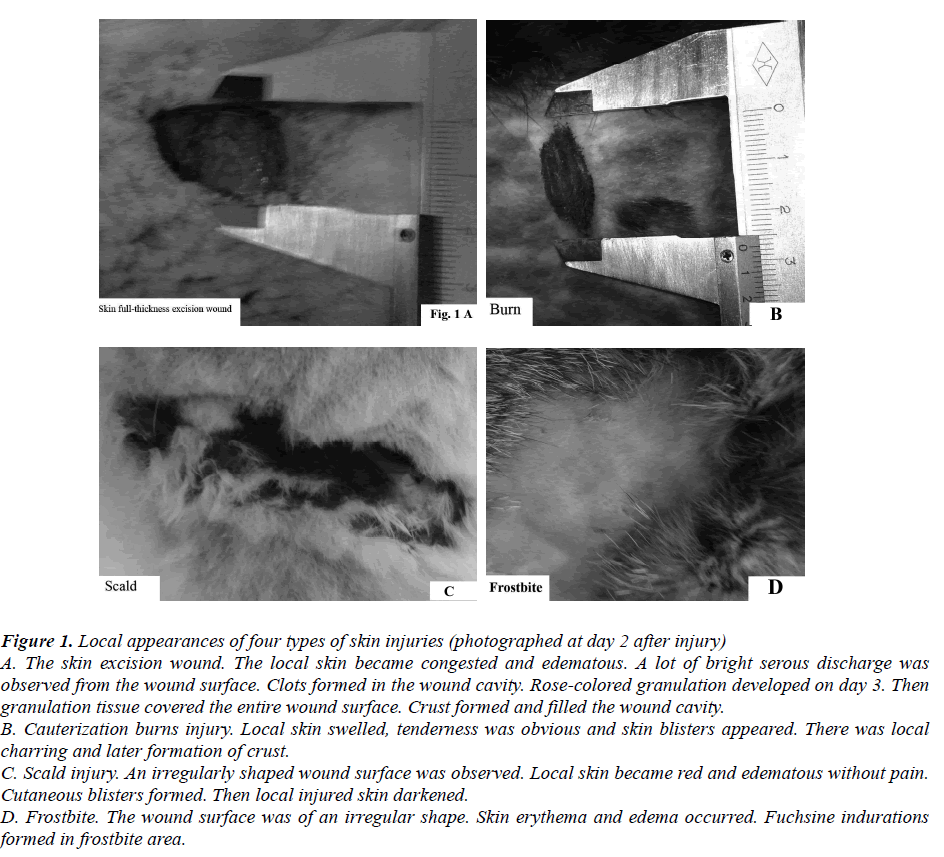 The rectal temperature of each rabbit was taken once a day. 400000 IU penicillin and 0.4g streptomycin were strewn on the wound surface of each rabbit for 5 days to prevent infection. Rabbits received a commercial diet (Lanzhou Taihua Feed Co. Ltd, China), according to their physiological conditions. Water was provided ad libitum. All procedures, referring to animal treatment, were approved by the Experiment Animal Care and Use Committee of Gansu province, the People’s Republic of China.

Morphological observations of the injured surface

Morphological changes and wound exudates (including quantity, color and nature) were observed once a day. The maximum longitudinal length and transverse length of the injured areas were measured using vernier caliper once a day until the clinical repair was complete. Injury area and daily contraction speed (DCS) of the injured surface (cm2/d) in each rabbit were calculated on day 21. Namely, the repaired areas (initial areas minus the scar areas) were divided by the repair time (21 days).

Body weight of each rabbit was measured with an electronic scale once a day for 21 days. Average daily gain was calculated on day 21.

After the clinical repair of all injuries were completed, each rabbit was anesthetized by injecting 0.2 mg/kg xylazine IM, and 10 mL of 0.5% procaine hydrochloride sc into the scar area. A sturdy silk band of 100mm×15mm was sutured on each edge of the scar in a buttonhole shaped suture. From each subject a piece of full-thickness skin, vertical to the scar centerline, was excised with a sharp scalpel. The tissue specimens were mounted on the tensiometer (Omega D670-44; Stanford, CA, USA) and then stretched. Each specimen was subjected to a tensile load at uniform speed, until the point of rupture [19]. Tensile strength (tensile load/surface) at the time of rupture was measured in kg for each rabbit [20].

Statistical analysis was performed using SPSS v. 18.0. The results were presented as the mean±SEM. Spearman method was used to analyze the correlations between blood glucose and tensile strength. When significant differences were identified, a supplementary Tukey’s post-hoc test was performed to investigate pairwise differences. P<0.05 was considered to be significant.

Cauterization burns injury: Local skin swelled on day 1 and tenderness was obvious. Profuse bright serous discharge exuded from the burn surface. Blisters appeared on day 2. Then the crust formed and filled the wound cavity. Clinical healing was completed by day 21.

Scald injury: There was an irregularly shaped wound surface following the scald injury. Local skin became red and swollen without any pain. Then cutaneous blisters formed on day 2. Adjacent small vesicles became large blisters. Profuse liquid flowed out from the blisters. Injured local skin darkened, hardened and fell off. Afterwards, the crust formed and filled up the wound cavity. (Days taken to heal up, not mentioned)

Overall, on day 21 the clinical repair process was complete and scars formed in all injured rabbits.

As shown in Table 1, there were no remarkable changes in the rabbits’ body temperatures in all four types of injuries. It illustrates that the injuries were not infected and that minor skin injuries do not influence the body temperature.

As listed in Table 2, the body weight in the excision wound group decreased gradually for 10 days, after injury, with a reduction of 7.81% compared to that of before the injury. However, subsequently it increased. Body weights in the other three groups increased. Mean daily gain in cauterization burn rabbits was higher than those in the excision wound (P<0.05), scald and frostbite groups. Body weight gain was the least in EG-1 rabbits. The present study demonstrated that the skin full-thickness excision wound obviously affected the growth of the wounded rabbits. 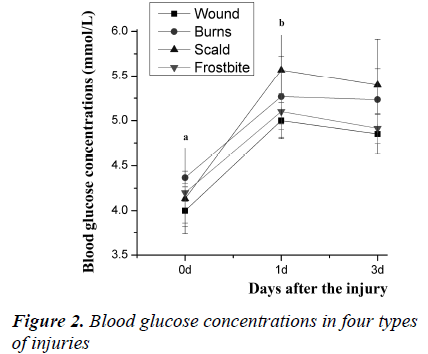 In comparison with values on day 0, the blood glucose concentrations increased significantly on day 1 and 3 (P ＜0.05) in all the four groups of rabbits. 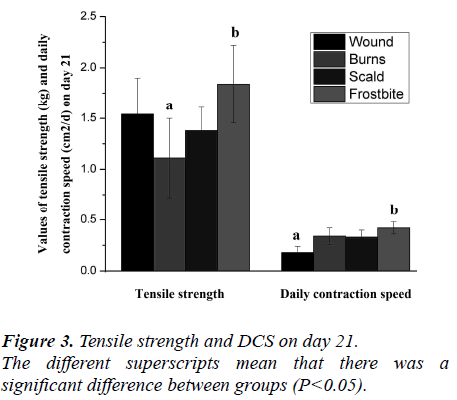 Figure 3: Tensile strength and DCS on day 21. The different superscripts mean that there was a significant difference between groups (P<0.05).

Humans and animals have the ability to restore any disruption of the normal continuity of body structure after physical injury [7,21].

Numerous changes in the injured areas can cause systemic reactions at different degrees after the tissues or organs are damaged because of pain, bleeding, inflammatory exudates and appetite loss. Therefore, injuries could affect the growth and development of humans and animals [1]. The more serious the injury is, the more noticeable the effects are [22]

Glucose is mainly used by the Na+/K+ ATPase system, which is indispensable for maintaining membrane stability and preventing functional, as well as structural, cell damage [24]. Post-burn, blood glucose increases due to more production of sugar and less utilization [25,26]. Hyperglycemia reduces collagen deposition in wound healing and wound elastic weakens [16]. Monitoring of blood glucose is beneficial to timely detecting and correcting glucose metabolism disorder. It also can prevent and control infection and other complications [18].

In this study, the blood glucose concentrations in all four groups of rabbits increased on days 1 and 3, with a maximum increment in the excision wound rabbits. The excision wound had the slowest DCS. Our findings are consistent with previous reports [25,26,27,28].

The tensile strength of tissue is one of the important indicators of bio-mechanical properties. The collagen fibers in the dermis are the main pressure-resistant substance of the skin. Collagen may promote scar formation. The tensile strength of healing wounds has a very close relationship to the collagen content in scar tissue. Collagen in newborn scar tissue is arranged irregularly [29]. Afterwards the fibers arrange gradually in the direction of stress, which could enhance the tensile strength of scar tissue [30]. But the closure of an excision wound requires more complex biological responses involving the formation of granulation tissue mediated through both epithelialization and angiogenesis [31].

In our study, the tensile strengths of frostbite rabbits were greater than that of the other three groups. The lowest tensile strength was found in the cauterization burn group. This may be associated with the types and degrees of injuries. Our findings were similar to that of Li et al. (1980) [32]. Their study showed that the burn wound contained only half the amount of collagen found in the freeze-produced wound. There was a greater and more rapid replacement of collagen in the burn wounds, although histologically the degree of initial tissue destruction in the two types of injuries was similar.

So far, there has been little comparative research on the repair characteristics of different types of injuries, especially in the biochemistry and biomechanics aspects [2,7,10]. Our results, however, need to be further confirmed by future research.

In conclusion, four types of injuries could increase blood glucose levels, maximum being in the scald injury group and minimum in the skin excision wound group. The skin excision wound affected daily weight gains of injured rabbits and had the smallest daily contraction speed (DCS) of wounded surfaces. Cauterization burns had the lowest tensile strength among the four types of injuries. There was a negative correlation between blood glucose level and tensile strength. This has provided the basic data and opened up a novel thought and method for a comparative study of the repair characteristics of different injuries in humans and animals. It may also help in the effective treatment of various injuries.

The work was supported by the Science and Technology Program Project in Gansu province of China (Grant No: 0708NKCA079).