Aorta is the largest artery in the human body. Thoracic aortic stiffness is correlated with cerebral apoplexy and other cardiovascular events. It is widely recognized that atherosclerosis is characterized with the hardening and thickening of the arterial wall. The artery wall contains lipid plaque deposition, which results from a variety of pathological factors including lipid metabolism abnormality, genetic susceptibility, hypertension, etc. The shear stress exerts the highest effect upon the hemodynamics of vascular endothelial cells [1-5]. Thoracic aorta possesses the characteristics of deuterostrophies, retrograde and eddy currents because of the complex anatomical structures, which is also the key determinant factor of hemodynamics [6,7]. The corresponding hemodynamic model tends to show abnormal changes when the lesions form. Computational fluid mechanics is commonly used to assess the fluid characteristics of the thoracic aorta, which is relatively better than the cardiovascular MRI because it can provide relatively comprehensive information on aortic hemodynamics by 3D visual flow pattern. However, it is limited by the restricted assumed model, time and space [8]. The application of Particle Image Velocimetry (PIV) for cardiac ultrasound can provide visualization and assessment of complex blood flow and eddy currents in vivo. Previous studies demonstrated that it exerts a comparative effect on the magnetic resonance in the evaluation of common carotid artery velocity [9-11].

Therefore, the aim of this study was to identify the difference of aortic vortex-related parameters in the patients diagnosed with cerebral apoplexy and their healthy counterparts by using the technique of trans-esophagus ultrasound, which contributes to the clinical diagnosis and treatment of cerebral apoplexy for physicians.

The study period was between August 1, 2014 and July 31, 2015, this study was a prospective study. The enrolled subjects were divided into the cerebral apoplexy (n=102) and control groups (n=20). Inclusion criteria: The diagnosis of cerebral apoplexy was validated by imaging tools including Computed Tomography (CT), Doppler ultrasound and MRI, etc. Exclusion criteria: Those patients were excluded if they were complicated with severe cardiac valve diseases, such as aortic regurgitation, stenosis, aortic aneurysm, severe heart rate disorders or atrial fibrillation, etc. Written informed consents were obtained from all participants. The study procedures were approved by the ethics committee of our hospital.

Ultrasound examination of the esophagus

The obtained images were analysed by two imaging professionals who were blind to the study. The velocity of eddy current and quantitative analysis of form, position and phase variation of vortex were assessed by Omega flow PIV software (version 2.4.5, USA) and inter-group analysis was carried out. The frontal and posterior positions of the vortex center were determined based on the depth of eddy current, and expressed as decimal digit 0 and 1. Lateral position of the Vortex (VT) showed the inner-lateral position of the vortex center. Vortex Length (VL) and Vortex Width (VW) were used to determine the shape of the vortex. VL was divided by VW, and then the Spherical Index (SI) of vortex was calculated. The pulsation of the aorta vortex was evaluated by measuring the Relative Strength (RS) and Vortex Relative Strength (VRS).

All data analysis was performed by SPSS 20.0 software (SPSS Inc., Chicago, USA). Continuous variables were expressed as mean ± standard deviation. Comparison between two groups was analysed by using t-test. The ratio comparison was conducted by using chi-square test. A P value of less than 0.05 was considered as statistical significance.

Apparent characteristics of the aorta vortex

The sequential changes of aorta vortex occurred during cardiac cycle between two groups. In the early systolic phase, it was associated with the left ventricular contraction, axial flow and non-rotational flow. During the middle and late stages, spiral axial flow was noted, which formed a clockwise vortex in the central part of the aorta and the range of vortex extended to peripheral aorta in the control group. A clockwise vortex was also formed in aorta center in the cerebral apoplexy group, it was located in the center but it did not extend to the aorta margins. At the end of the systolic period, the clockwise vortex that was formed in the middle and late stages of contraction collided with new formation of counter clockwise vortex. The irregular shaped vortex was observed in the periphery of the aorta. On the contrary, there was no change of the clockwise vortex in the cerebral apoplexy group and no significant peripheral vortex was generated (Figure 1). For the ultrasound analysis, the interobserver variability coefficient was ranged from -0.11/+0.13, and the intraobserver variability coefficient was between -0.15 and +0.14, suggesting a good inter/ intraobserver correlation in ultrasound examination. 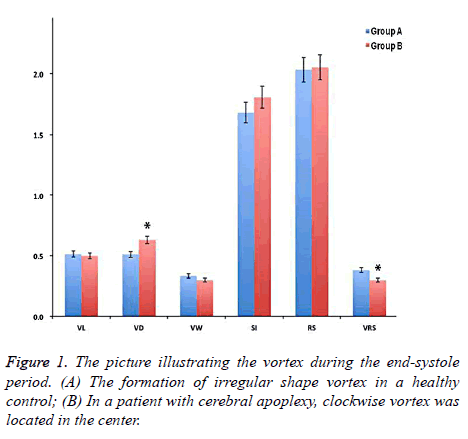 Figure 1: The picture illustrating the vortex during the end-systole period. (A) The formation of irregular shape vortex in a healthy control; (B) In a patient with cerebral apoplexy, clockwise vortex was located in the center.

There was no significant difference in the vortex width which was associated with vortex form, vortex length, vortex sphericity index and other parameters, whereas Vortex Depth (VD) in the control group was significantly deeper than that in the cerebral apoplexy group (0.612 ± 0.171 vs. 0.582 ± 0.122, P<0.05). Relative Strength (RS) represented the pulsation of the whole aorta, there was no significant difference between two groups; The RS of vortex in the cerebral apoplexy group was higher compared with that in the control group (0.362 ± 0.091 vs. 0.381 ± 0.161, P<0.05) (Figure 2). 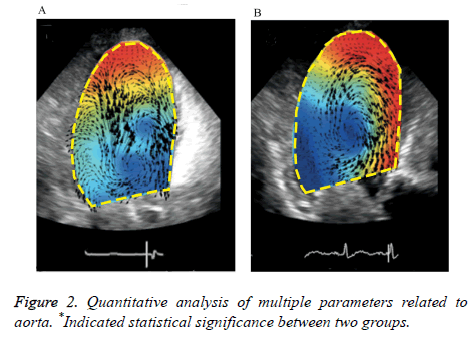 In this study, the characteristics of aortic vortex between the healthy controls and the patients with cerebral apoplexy were statistically compared. The cross-section images of the vortex were utilized to quantify the relative characteristics of vortex, and significant differences were observed among different fluid models between the healthy subjects and patients with cerebral apoplexy.

The flow pattern and hemodynamics of the aorta in thoracic aorta have been intensively investigated. In previous studies, aortic flow was assessed by in vitro application of resin bead or Doppler color echocardiography. Because the fluid model was relatively complex, it could not be applied to evaluate the aortic flow of the human body [12,13]. Previous investigation demonstrated that elevated heart rate could negatively influence cardiovascular risk in the general population. It can induce and promote the atherosclerotic process by means of several mechanisms involving endothelial shear stress and biochemical activities. Furthermore, elevated heart rate can directly increase heart ischemic conditions because of its skill in unbalancing demand/supply of oxygen and decreasing the diastolic period [14]. The computational fluid dynamics assessed by three dimensional numerical imaging has been gradually applied to analyse hemodynamic characteristics of the aorta in vivo. However, several limitations have to be acknowledged. For instance, it was limited by the assumptions of geometric model, viscosity, expansion and flow conditions and other factors [15,16]. Applying and comparing TEE and PIV had multiple advantages for evaluating the characteristics of aortic vortex. It could achieve real-time visualization of aortic flow at a higher resolution after using contrast medium. Meantime, the changes of aortic vortex also possessed a very high temporal resolution in each cardiac cycle at 60-80 frames/ sec.

At present, aortic flow has been widely studied besides simple pulsation, axial position, secondary helix and vortex. The shear stress generated by helical and reverse flow of vortex adjacent to the aortic wall might be one of the most important reasons leading to aortosclerosis [13,14,17,18]. By TEE and color Doppler ultrasound, aortic vortex formed on the cross-section imaging of the descending thoracic aorta. Clockwise or counter-clockwise rotation of the vortex was observed in a majority of patients during paradoxical expansion and relaxation period. Due to the technical limitations, merely the existence of aorta vortex was confirmed. In addition, the indication of TEE was diversified in enrolled patients who were complicated with vascular heart disease or valve prosthesis or alternative complications, but the clinical data regarding healthy controls are lacking. Therefore, the overall quality of this investigation is limited. In this study, the sequential changes of aortic vortex throughout the cardiac cycle were monitored and statistically compared between the healthy controls and cerebral apoplexy patients. In the control group, the clockwise vortex was found during the late stage of contraction contrasted with the counter-clockwise vortex which formed in the early diastole stage. A large quantity of peripheral vortexes was seen at the late stage of contraction, which probably resulted from the shear stress and preventing blood flow into the periphery of the aorta, suggesting a potential role in anti-atherosclerosis. However, the clockwise vortex in the patients with cerebral apoplexy which formed at the late stage of contraction did not coincide with counterclockwise vortex in the early diastole stage, indicating it could endure to the late diastolic stage. Unidirectional great vortex was formed in aortic center without interference of reverse vortex. The RS of vortex in patients with cerebral apoplexy was also higher than that in healthy controls. Blood flow was relatively stagnated around aorta, which increased the potential risk of atherosclerosis.

Shear stress in blood vessels played an important role in atherosclerosis and plaque formation. The studies showed that the weakening of the transverse shear force of the arterial wall was related to atherosclerosis [22-25]. In normal control group, we could find that there was a dynamic and multi direction vortex in the whole cross section area, which included peripheral area of aorta. In the patients with cerebral apoplexy, the vortex in a single direction was only observed in the central region of the aorta. The loss of vortexes in the surrounding area might relate to transverse low shear stress, so that increased the risk of atherosclerosis.

Another important factor that related to atherosclerosis was the transport of Low Density Lipoprotein (LDL). Peripheral blood stagnation and the lack of the formation of the reverse vortex of patients with cerebral apoplexy could increase the time and possibility of blood contacting vascular endothelium, so that it would be easier for low density lipoprotein to be delivered to artery endothelial and further promoted the incidence of atherosclerosis.