Objectives: It’s difficult to discover autism as early as possible for early intervention because no generally accepted effective signs could be used for early detection. This article aims to investigate highfrequency traits of autism and identify predictive signs for early screening.

Methods: A comprehensive observation scale was completed by parents. The common traits of 228 cases of children who were diagnosed as typical autism were collected and analysed with SPSS24.0.

Results: Impairments in “social communication” and “language development” are the most serious during the four aspects (P<0.01), whose mean response rate are 74.55% and 76.16% respectively. In “social communication”, high-frequency traits with single response rate ≥ 90% has a significant difference than the single response rate<90% at the abnormal behavior appeared age of ≤ 18 months (P<0.01), and once they appeared it will be persistent and don’t disappear with age (P>0.05).

Conclusions: The results suggest that high-frequency combined traits in “social communication” could be used as early signs for screening and detection of autism.

Autism is part of a neurobehavioral disorder and has nothing to do with episodes of psychosis, which characterized by impaired social communication, language development, and repetitive interest and behavior [1,2]. Genetics and environmental factors of early development are the key roles in the etiology of autism. Despite remarkable advances has been made in the field of genomics, such as continuously being discovered large-effect rare mutations and small-effect common variants, its pathology remain unknown, and case identification is still mainly based on symptomatology [3-5]. Limited knowledge regarding the underlying neuropathology for these related conditions has meant that diagnosis is reliant on behavioral presentation and developmental history. Currently, autism assessment and diagnosis mainly base on the available autism diagnostic criteria and various observation scales, which could not be used for detection of autism as early as possible [6,7]. Regarding treatments, the best way to date to alleviate patients’ autistic traits is the sorts of comprehensive intervention programs except regular medication treatment. Early identification and detection provide the best opportunity for early intervention, which can prevent autism from becoming worse with the increase of age and get the maximize developmental outcomes, for example, the children may regain self-care ability and become economically self-supporting by obtaining relatively simple jobs [8-10]. The earlier the disease is detected and intervened, the better the outcomes would be seen [11,12]. In this study, we focus the early signs of autism mainly on the high-frequency traits of all subjects and group the patients by the age at abnormal behaviors observed not diagnosis.

From the key project of the Commission of Population and Family Planning, “Study on the genetic and molecular mechanism of children autism”, the common traits of 228 cases of children with autism are retrospectively collected from our comprehensive observation scale, which was answered by the patient’s parents with informed consent under the instruction of professional physician of children development, including 192 cases of boys and 36 cases of girls (male to female ratio: 5.33:1), the mean age at abnormal behaviors observed was 26.22 ± 12.88 months, and participants over 5 years old are screened out and not included in the statistics. All of them are diagnosed as typical autism by physician of children development in local hospitals, and excluded Asperger’s disorder, atypical autism and other Pervasive Developmental Disorders-Non Otherwise Specified (PDD-NOS).

A comprehensive observation scale including 66 common traits in aspects of “language development” (14 traits, from A01 to A14), “social communication” (17 traits, from B01 to B17), “repetitive interest and behavior” (19 traits, from C01 to C19), and “other atypical traits” (16 traits, from D01 to D16), was summarized and integrated from the published papers, current diagnostic criteria and observation scales that generally accepted and used in clinic. All of the 66 deficits are provided only two answers with either “presence” or “absence” and thus are easy to understand and assess for parents who know the abnormal phenotypes well about their own children and received autism diagnosis later. The detailed information is in the Table S1.

Reliability of the observation scales

Mean response rate of all traits in four aspects

Mean response rate of the traits in aspect of “language development” and “social communication” are 74.55% and 76.16%, respectively (P>0.05), which are much higher than the deficits in “restricted interest and behavior” and “other atypical traits”, whose response rate are only 56.68% and 42.74%, respectively (Figure 1 and Table S2, P<0.01), suggesting that deficits in these two aspects are more common and easy detectable. 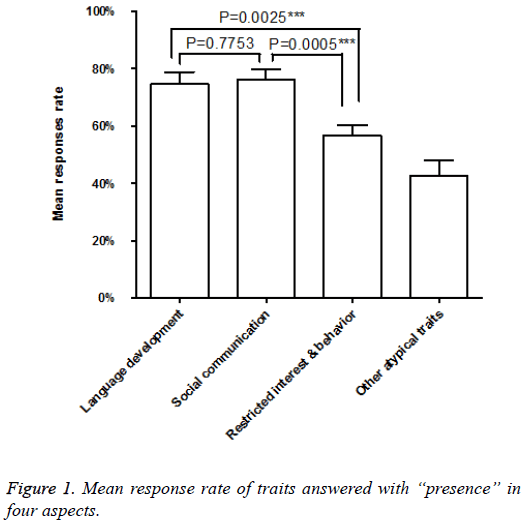 Because children’s language ability is not developed completely in early childhood, impairments in “language development” are not clearly distinguishable between autism and normal children at early age. So this result guided us to looking for the early signs that could be used for early screening of autism from the high-frequency traits in “social communication”. We divided the traits into two groups according to its own response rate, ≥ 90% and <90%, respectively. As shown in Figure 2 and Table S3, there was a statistically significant difference between the two groups (P<0.01), particularly at the abnormal behavior observed age at or before 18 months. Accordingly, we defined the trait with single response rate ≥ 90% as high-frequency trait, and what’s the most important is that these traits will be persistent and don’t disappear with the age once appeared (P=0.978). All the detailed high-frequency traits were listed in Table 1, only B09 (Not attracted by eye contact or sound), had a statistically significant difference before and after 18 months (P=0.011). 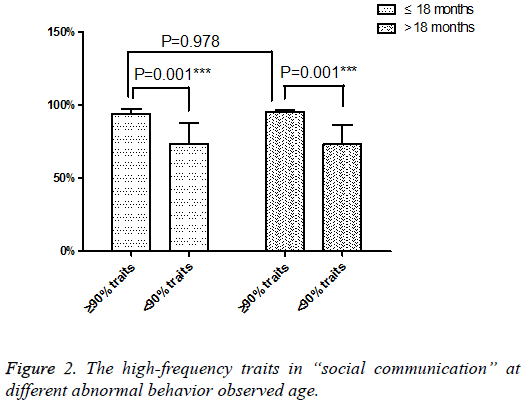 The current prevalence of autism is estimated to be 1 in 100 [13] and recent estimates of the risk of recurrence in families with at least 1 child diagnosed with autism are 10% to 19% [14,15]. Although the exact etiology remains unknown in most families, accumulating evidence suggests that this disease is genetically heterogeneous. Lots of genomic DNA copy number variations and single nucleotide mutations are implicated in the etiology of the disease [16,17]. Most of researches implicated that the pathogenesis of the disorder would be genetic variants, environmental factors and potential gene-by-environment [18]. Although the advances in genetic findings provide a solid foundation for understanding and intervention of autism, there is no biomarker which could be used for diagnosis or treatment. Like etiology characters, there is also a high heterogeneity in clinical manifestations of autism. To date, early identification of autism is the only valid way to ensure that children can access specialized evidence-based interventions. Despite researchers and physicians’ efforts, it is still very difficult to diagnose autism before age two. Most children are diagnosed at 3-6 years of age or even later that missed the best time to intervene.

Our results showed that the most common impairments that could be primarily concerned by parents in children with autism are in the aspect of "language development" and "social communication". Grouping traits by the age of abnormal behaviors observed is a more practical and reliable method for seeking of early signs. Because the language ability of children is a continuous development progress, then we focused the deficit traits in the aspect of “social communication”. Our results show that high-frequency traits, including “Lack of interest in active communication and play”, “Often entertains themselves and acts alone”, “Lack of variations in facial expression and social smile” ,“Not attracted by eye contact or sound” ,“Unable to play Role Play Games” and “Does not respond when parents call their names” , are primarily concerned and easy detected by parents at or even before the age of 18 months, and what’s more, these traits are very consistent and has not correlation with the age of onset , which indicate that they are reliable early signs for autism detection.

To further confirm the high-frequency traits’ reliability, we randomly chose some normal children as the control. Results showed that there was a statistically significant difference between normal children and autism children for all traits (data was not shown, P<0.01), indicating that the early signs reported in this study could be used to clearly distinguish autism children from normal children. If parents observe those high-frequency traits in “social communication” or abnormalities alike, they should keep fully alert and consider the possibility of the children suffering from autism, and then the children should be taken to hospital as early as possible instead of being ignored or considered normal.

It should be emphasized, however, that the high-frequency traits of deficits in “social communication” involved could be used together as a set of early signs for autism screening instead of for autism diagnosis, and also there are some limitations inherent in this retrospective study designs, for example, parental reports of early symptoms of autism are subject to recall biases, such as early behaviors more closely related to later manifestations of autism may be easier recalled. Prospective research designs should be taken for further study to compare the result of this study to identify additional potential behaviors that could contribute to early screening of children with autism.

Social communication abnormalities are inborn deficits of autism children which are primarily concerned and easy detectable at early ages (at or before the age of 18 months) by parents. They could be used together as the early signs to more accurately screening this disease. Only in this way could the disease be detected and intervened without delay, allowing the children with autism to benefit from early intervention and maximize developmental outcomes for affected children and their family. It is recommended that using the high-frequency traits in “social communication” features as early signs to monitor the children autism before the age of 18 months.

The authors would like to thank the parents involved in this study for their excellent cooperation and the physician’s outstanding efforts. We also appreciate the fund provided staff members.