Neuroendocrine Tumours (NEC), are neoplasms that arise from cells of the endocrine (hormonal) and nervous systems. Many are benign, while some are malignant. They most commonly occur in the lung, intestine, where they are often called carcinoid tumours, but they are also found in the pancreas, and the rest of the body. The female genital counterpart is aggressive and uncommon, with propensity to involve the cervix and ovary, the endometrium variant is seldom occurring and tends to be of a conventional small cell type (up to 60 cases). Only twelve cases of large cell type NEC. In our centre, we diagnose a case of Large-Cell Neuroendocrine Carcinoma (LCNEC) of the, endometrium in an 82 y old female. It was report it as mixed type tumour papillary serous and large neuroendocrine, with FIGO nuclear grade III, the endocrine origin of the tumour was confirmed by immunohistochemically endocrine marker CD56 and NSE. Patient medical condition was unfit for surgery and she chose palliative treatment.

Large Neuroendocrine Carcinoma (LNEC) tends to be high grade and is known to behave in aggressive fashion. It is predominantly occurring in the lung. Recently few cases been reported in the female genital tract, most commonly in the cervix [1-3]. Although the primary (LNEC) of the endometrium is quite rare, the age of presentation is usually between 30-90 y, however, the presentation of endometrial (LNEC) is related to metastases [4], and some time to associated symptom of concomitant paraneoplastic syndromes such as [5], Cushing syndrome due to ectopic ACTH production [6]. We discuss the pathological aspect and diagnostic tool of immunohistochemically stain in 83 y old woman who present with postmenopausal bleeding, in which her histopathology diagnosis was issued as mixed type tumour papillary serous and large neuroendocrine, with FIGO nuclear grade III.

83 y old Saudi woman complains of post-menopausal bleeding since six months. She soaks medical advice in Aya Hospital. At presentation, on physical examination was unremarkable, and the results of routine serum biochemistry are within normal limit, apart from CBC, HB show mild normocytic normochromic anaemia, per vaginal examination show no abnormality regardless the complain of PV bleeding cytology was negative at admission. Ultrasound examinations revealed thick endometrium in which hysteroscopy biopsy was preformed, multiple fragment of greyish brown and heomhargic tissue was obtained measuring in aggregate 7 × 4 × 3 cm. Microscopic examination revealed multiple fragments of endometrial tissue and, report was issued with a diagnosis of combined endometrial carcinoma with a component of papillary serous endometroid and large neuroendocrine carcinoma. Patient underwent radical hysterectomy, bilateral salpingo oophorectomy, bilateral pelvic lymph nodes dissection, and omenectomy. On gross pathologic examination, the uterus weighed 100 g, measures 4.5 cm from Cronus to Cronus, 3.5 cm anterior to posterior and body cavity measures 5 cm, there was large haemorrhagic mass seen involving the whole posterior endometrium and part of the anterior surface measuring 3 × 3 cm it was away from the cervical canal and vaginal vault by 4 cm, although grossly there was brownish irregular area seen along the endo cervical canal. 14 bulky pelvic lymph nodes measuring up to 3 cm was obtained. The ovaries, tubes and omenum are grossly free. On microscopic examination shows diffuse neoplastic growth, comprised of an admixture of combined papillary serous carcinoma and large cell neuroendocrine carcinoma (Figure 1). Both components are typically high-grade, exhibit solid sheets, island and focal areas of papillary pattern floated in lakes of mucin. The tumour cells made up of medium to large polygonal cells with scant to moderate amphiphilic cytoplasm, grow in cords and trabeculae pattern and focal pseudo rosette formation. Abundant mitotic figures are seen, (up to 19 mitoses per 10 high-power fields), as well as numerous apoptotic bodies a foci of geographic necrosis. Nuclear melding and crush artefact were focally noticed, and some of the large cells were multinucleated. Area of papillary serous carcinoma was present I (constituting 30% of the tumour). The surrounding area show poorly differentiated component, (about 10%), there is evidence of vascular invasion. The tumour involved 50% thickness of the myometrium (1 mm away from the serosal surface) as well as the cervical stromal connective tissue, and bilateral ovaries and tubes. Lymphovascular space invasion was present. Tow of 14 pelvic lymph nodes was positive for metastasis. The omentum was free from tumour deposit. Immunohistochemistry was performed. CK, P53, (Figure 2) neuroendocrine marker CD56 and NSE, (Figure 3) were performed using manual procedure encompasses antigen retrieval and applying the labelled antibody. Control used is breast, tonsil and appendix. CK show strong positive expression of the epithelial cells, neuroendocrine marker (CD56 and NSE) show strong positive expression of the epithelial cells with large neuroendocrine feature, while negative in the endometrial component. P53 show strong positive nuclear expression of the epithelial cells (95%), indicate high grade lesion. Her final FIGO histological grade was III. Pathological staging (pTNM) stage was pT3a, pN1, pMx. Patient receives chemotherapy treatment and she is doing well and alive up to date. 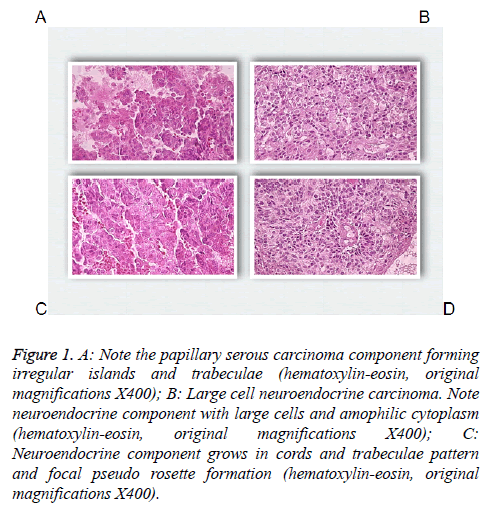 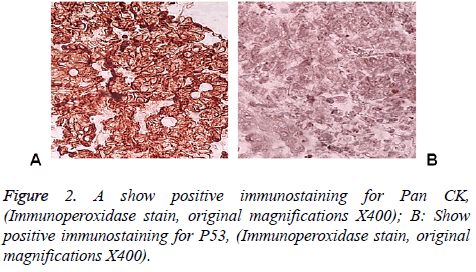 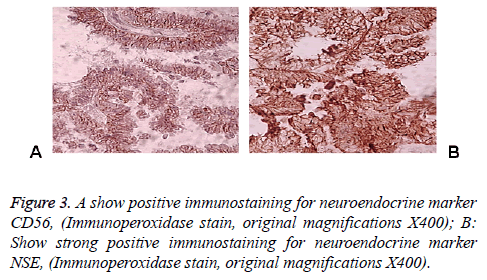 The most common site of developing LNEC is the lung, and gastrointestinal tract. Extra-pulmonary LNEC comprises less than 4% of all LNECs. The female genital organs are a very rare site for LNEC to occur and majority are seen in the cervix and ovary [1,3,5,7]. Primary endometrial LNEC is extremely rare [2,8,9], accounting for about 0.78% of all endometrial carcinomas. The primary uterine variant is tending to be very aggressive and mostly combined with other high grade variant of endometrial carcinoma [13,14,16]. This tumour has a high propensity for systemic spread, therefore it carries poor prognosis. the age prevalence is usually between 40-90 y more often seen in postmenopausal women who presented clinically with history of per vaginal (postmenopausal) bleeding, sometime the symptom may be related to paraneoplastic syndrome that is commonly associated with this tumour, particularly Cushing syndrome, due to ACTH, [5,6,17]. Radiologically, transvaginal ultrasound is the initial imaging investigation of choice for patients presenting with the usual symptom of a postmenopausal bleed. A thickened endometrium requires endometrial sampling. MRI is considered superior to CT for local staging [1,6]. Contrast enhanced MRI imaging improves accuracy in detecting myometrial invasion. Endometrial cytopathology is a powerful tool for the detection of a wide variety of benign atypia’s, inflammatory changes, and infectious organisms. It is also helpful for the cytohormonal evaluation of patients and the detection of endometrial malignancies. The cytological sensitivity in detecting endometrial carcinoma is about 30% therefore the literature review document only two cases of endometrial LNEC in cytology. Pathological examination the optimal procedure is the radical hysterectomy, in order to do a proper histopathological staging of the myometrial depth of invasion and subsequent cervical, vaginal and adnexal extension. Unfortunately, in our case the patient was old and refused to do operation. So our microscopic evaluation was based mainly on endometrial solid sheets of pleomorphic cells with frequent large polygonal cells, that exhibit scant to moderate amphiphilic cytoplasm, foci with cords and trabeculae and pseudo rosette formation are noticed, abundant mitotic figures are seen, (up to 19 mitoses per 10 high-power fields), as well as numerous apoptotic bodies a foci of geographic necrosis. Nuclear melding and crush artefact were focally noticed; area of papillary serous carcinoma was present I (constituting 30% of the tumour). The surrounding area show poorly differentiated component, (about 10%), there is evidence of vascular invasion.

Immunohistochemical stain is considered as the best ancillary tool for diagnosing confirmation of neuroendocrine histogenesis origin of the tumour cells. The commonly used neuroendocrine marker is synaptophysin, chromogranin and CD56 and NSE. Approximately 25 to 38% of cases expressing chromogranin and synpatophysin [9-12]. While (NSE) and (CD56) show constant strong positive stain in the NEC cells in about 90-100% of the cases. Expression of broad-spectrum cytokeratins is usually present. Staging of endometrial carcinoma is a based on the FIGO staging system, which is a surgical and pathological staging following total abdominal hysterectomy, salpingo-oopherectomy, lymphadenectomy and peritoneal washings.

The differential diagnosis, of primary endometrial LNEC is metastatic spread from the cervix, however other endometrial carcinomas (Carcinosarcomas, stromal sarcomas and primitive neuroectodermal tumors of the uterus), which contain argyrophil cells. Undifferentiated and dedifferentiated endometrioid carcinomas also included in deferential list of the LNEC [16,17], in contrast to the genetic progression of carcinomas [18,19]. Recently study on massively number of endometrial carcinoma, finally authors end up by fact that TP53 mutation is commonly expressed in higher grade group, therefore our case shows strong P53 expression>than 98% of the cells which is correlated with poor prognosis and aggressive behaviour.

Special thanks for Almamlka Labs for their support.