Computer aided detection (CAD) is the main aid used by radiologists in detecting microcalcification in digital mammogram for the early detection of breast cancer. In this paper we have improved the preprocessing method involves in CAD by modifying the local range modification (LRM) as modified LRM (MLRM) for the noise removal and enhancement. And we have combined this method with the fuzzy C means clustering (FCMC) method and tested for over 30 mammogram images and found the microcalcification detection accuracy of 98.1 % which is better than the other existing methods.

Breast cancer is a major public health problem in the world and the most common form of cancer among women worldwide. It currently accounts for more than 30% of cancer incidence and a significant % of cancer mortality in both developing and developed countries. Successful treatment relies on early detection [1]. Digital mammography is one of the most reliable method involves in the detection and diagnosis of breast pathological disorders [2]. Analyzing mammogram images is the most challenging task in medical image processing. Computer aided detection (CAD) tool is the aid for the radiologists in analyzing such images for the effective detection and diagnosis of the disease. Such a CAD tool consists of Preprocessing, Segmentation and detection processes [2]. Dense regions in digital mammogram images are usually noisy and have low contrast and their visual screening is difficult [3]. Contrast enhancement is the most sensitive imaging technique for breast cancer detection. Global and local histogram equalization techniques had been proposed by [4]. ACM active contour model [5], spatial constraint to a fuzzy cluster [6], Markov random field (MRF) [7] had been proposed for the preprocessing. Image is modeled as a set of spatial patterns to incorporate the spatial information implied by each pattern into the object function of fuzzy C means (FCM) clustering, in [8], presented a new method of dissimilarity between a spatial pattern and a cluster, which reflects not only the distance in feature space, location of the pattern of the lattice. Feature extraction is used to find an appropriate measure to characterize the homogeneity of each region inside an image [8]. The contrast in mammograms is very low and the boundary between normal tissue and tumors is unclear, the traditional segmentation methods might not work well [4]. Image enhancement algorithm has been utilized for the improvement of contrast features and the suppression of noise [2]. Contrast limited adaptive histogram equalization (CLAHE) based on local parameters was proposed by [9], region based approach for the enhancement of regions of interest (ROI) has been proposed by [10]. Non linear gray level re-scaling method has been used for enhancement [3] and filtering signal dependent noise on digitized mammographic phantom images using a direct contrast modification method was proposed by [11]. Automated interpretations of microcalcifications and masses are very difficult since the ROI’s are usually of low contrast, especially in the age of young women [12]. So, Mammographic feature enhancement (cluster detection and enhancement) will be essential and critical for automated mammogram analysis. It is performed by emphasizing image features and suppressing noises so that the image quality can be greatly improved and be useful for breast cancer diagnosis. In this paper we have discussed about the MLRM for noise removal and contrast enhancement and FCMC for cluster detection and enhancement (FCMC).

The database of mammograms used in this work is known as Mammographic Image Analysis Society (MIAS) Mini Mammographic Database. The example image used in this paper is mdb75 and it is shown as original image in figure 1(a). The entire method presented in this paper was implemented in MATLAB 7.0, and makes extensive use of the Image Processing Toolbox. The methodology used consists of two main stages. First is the pre-processing (MLRM) stage and it consists of noise removal and enhancement. Second is the segmentation stage (FCMC cluster detection and enhancement).

The MLRM algorithm processes same as that of LRM [2] but with two changes. The first is maximum and minimum pixel values of non-overlapping 48*48 pixel sized blocks are computed during first pass instead of 51*51 in LRM. And the second is estimation of regional maximum and minimum values based on the interpolation of eight surrounding grid points (shown in figure 1 as bold letters) instead of four in LRM [2] is shown in figure 1.

Figure 1: Estimation of regional maximum and minimum values based on the interpolation of eight surrounding grid points ((Hi, Li) and (Mi, Ni) are the minimum and maximum grayscale values for each grid point s).

The (Hi, Li) and (Mi, Ni) are the minimum and maximum grayscale values.

from (1), s is the size of the block, sx and sy are the horizontal and vertical distances of the examined point, respectively, from the M5 grid point, and M1, M2, M3, M4, M6, M7, M8 and M9 are the intensity values of the eight surrounding grid points. These modifications enhance the image better than the other methods.

The output value of each pixel with coordinates [m, n] is calculated by linear stretching given in (2).

Where L is the number of grayscales (image depth), max and min are the margins of the local input grayscale range, respectively. These modifications enhance the image better and shown in figure 2(b).

Figure 2: MLRM Enhanced Image Output of mdb75, In figure 2, 2(a) is the original image and 2(b) is the MLRM enhanced image.

Process of grouping the objects into clusters is the main work of FCMC. Tree structured non linear filter is used in [13] for the enhancement and segmentation of microcalcification clusters. Radiologists usually use clusters to classify the true positive (TP) and false positive (FP) calcifications [14]. Objects within a given cluster have a high degree of similarity and objects belonging to different clusters have a high degree of dissimilarity. Based on these criteria FCMC grouping the features in different category as clusters. Objective function J of FCMC is given below in (3).

where m is any real number greater than 1, c is number of cluster, X is the i object of given N objects, U is the degree of membership of x in the cluster j, C is centroid of cluster j, ||*|| is euclidean distance between any data object and the centroid. The parameter m (≥1) is called fuzzifier and signifies the amount of fuzziness in the solution set. And the algorithm is as follows.

Output : Membership matrix U for n objects and K clusters

Step-1: Declare a membership matrix U of size n*K.

Step-6: Repeat steps 3 to 5 until convergence.

The proposed combination detects the cancer in an effective way and the resulted images are given in figure 2. This mammogram image has been tested already and found that it is a fatty breast with malignancy. In figure 3, 3(a) ROI from the original image mdb75, 3(b) Image labeled by cluster indexed image, 3(c) Objects in cluster 1, 3(d) Objects in cluster 2, 3(e) Objects in cluster 3 and 3(f) Objects in cluster 4. Thus the FCMC method performs well on mammogram image, it segmented and enhanced the required area in the mammogram called suspicious region. Detection of microcalcification and mass were done based on the above said cluster detection and the selection of suspicious regions is performed based on the ranking system in [15]. The comparison of proposed with the other existing methods is given in table 1. 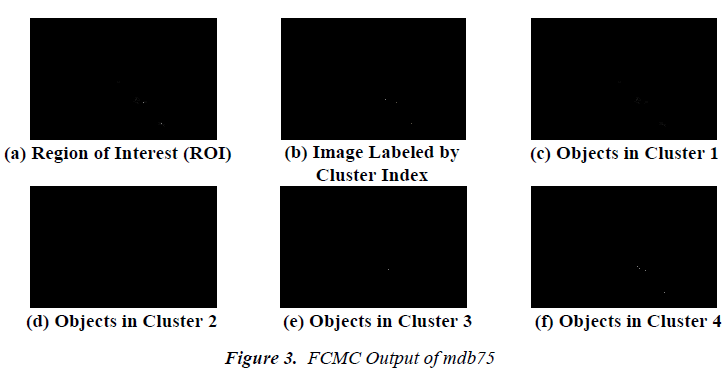 Table 1: Comparison of Various Enhancement Techniques with the MLRM.

Further, the receiver operating characteristics (ROC) analysis has been done for the methods in table 1. From figure 4 the average ROC values of LRM and MLRM has been compared with Contrast Limited Adaptive Histogram Equalization (CLAHE), Wavelet Linear Stretching (WLST), Wavelet Shrinkage (WSRK), Wavelet Background Approximation (WBGK) and without enhancement (WOE). 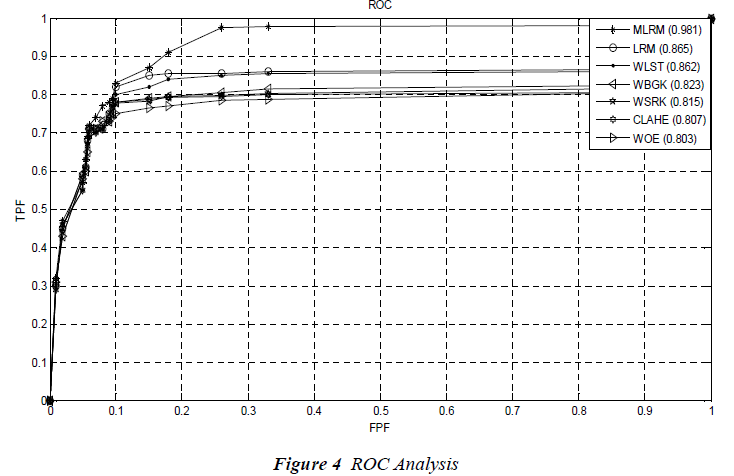 This new method provides good support to the radiologist in detecting the breast cancer. The small modification in the LRM technique reduces the noise and enhances the mammogram image. And MLRM uses eight surrounding pixels instead of four in LRM, this made the proposed method little bit complex and because of this the computational complexity may increase. But the image quality found is good and satisfactory when comparing to LRM. Further the FCMC technique is used to correctly segment and enhance the cluster. This combination (MLRM and FCMC) provides a good platform in detecting breast cancer with the accuracy of 98.1% and has also been validated by expert radiologists