Coexistence of vitiligo and psoriasis in a child with progressive familial intrahepatic cholestasis type 2.

Progressive familial intrahepatic cholestasis type 2 (PIFC2) is a rare autosomal recessive liver disease. This article presents a 5-year-old girl with PIFIC2 who developed both vitiligo and psoriasis as co-localization. This coexistence of skin disorders may represent a new association with the genetic disease. No reports of this possible association have been previously published. The article overview relationships among Vitiligo, Psoriasis and Liver cholestasis.

Progressive Familial Intrahepatic Cholestasis (PFIC) is a group of rare autosomal recessive diseases that result from defective bile formation and subsequent liver injury. Three classic types and total of six types have been identified to date [1].

These hepatocellular transport defects manifest with cholestasis progressing to cirrhosis and liver failure. Therefore, pruritus and jaundice are common features [2]. Other clinical manifestations include failure to thrive, diarrhea, and fatsoluble vitamin deficiencies. With the progressive nature of the disorders, the development of hepatosplenomegaly can be an issue. Liver transplantation remains the most effective treatment modality with the use of Ursodeoxycholic acid and other agents for symptomatic treatment [3]. PFIC type 2 or Byler syndrome is caused by ABCB11 gene mutation coding a bile salt export pump [1]. PFIC2 was confirmed in our patient through genetic testing, and a unique coexistence with psoriasis and vitiligo was noted. No clinical association regarding psoriasis or vitiligo to such disorders has been documented in the literature to our knowledge, and this article presents the first case of PFIC2 in the context of both psoriasis and vitiligo. The coexistence of psoriasis and vitiligo has been reported in the literature, although the association is uncommon. Autoimmunity is described in both conditions with multifactorial pathogenesis. Triggers, such as stress, infection and trauma, are common for both [4]. Indeed, psoriasis and vitiligo are common diseases that are expected to occur by chance in any patient. However, this article presents a possible new association that could be of significance.

A 5-year-old girl known to have chronic liver disease with dysfunctional liver enzymes and coagulopathy due to PFIC2 was waiting for a possible liver transplantation. She was admitted by pediatric gastroenterology due to gastroenteritis. As an inpatient, dermatology consultation was requested for a new rash that had developed over the body for 4 months. The child was known to dermatology clinic due to her regular visits for the psoriasis she is having since she was 3 years old. During the last 4 months, the mother noted that upon the resolution of the psoriasis lesions, the skin had become persistently whitish.

The patient was underweight and jaundiced but not dehydrated or pale. All vital signs were normal. She has a distended abdomen and hepatosplenomegaly. No lymphadenopathy was detected. 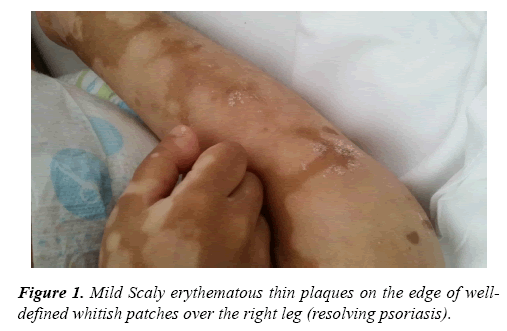 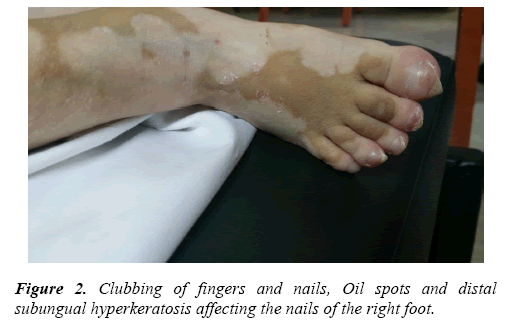 Figure 2. Clubbing of fingers and nails, Oil spots and distal subungual hyperkeratosis affecting the nails of the right foot.

She is known to have psoriasis for the last 2 years and her skin histopathology has been consisting with psoriasis (Figure 3). 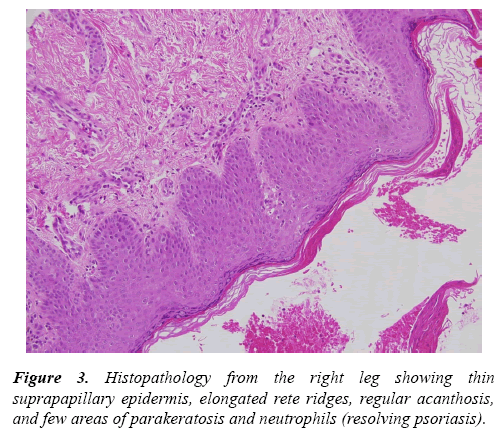 Vitiligo is the new clinical diagnosis. Only emollients were prescribed because her mother was uncomfortable with other treatments. An appointment for follow-up was scheduled. Unfortunately, she died due to complications of advanced liver failure.

Coexistence of psoriasis and vitiligo

Psoriasis and vitiligo are common diseases. However, the coexistence of these conditions is quite uncommon. In fact, it is rare to find strict localization of both. The pathogenesis of each condition is partially explained by autoimmunity, cytokines, Koebner phenomenon and genetics [5]. The association of both conditions coexisting on the same site could have cause and effect relationship or merely reflect a Koebner phenomenon [6]. An interesting study of two patients having psoriasis strictly within vitiliginous lesions noted the presence of high Tumor Necrosis Factor alpha (TNF-alpha) and interferon gamma as a form of local T-Helper 1 (TH1 cell) cytokines response. One patient had a genetic risk for psoriasis based on Human Leukocyte Antigen Cw6 and B57 positivity and family history of psoriasis. The author suggested that local alteration of the cytokines in a genetically predisposed individual could be a trigger for strict anatomical coexistence [6].

Liver disease and the relationship with vitiligo or psoriasis

Interesting study of 22 patients with generalized pustular psoriasis, 8 patients had high bilirubin levels, and 17 had high gamma-glutamyltransferase levels. This study concluded that biliary involvement in the form of neutrophilic cholangitis is a manifestation of pustular psoriasis [14]. A case report described a patient who experienced improvement of his psoriasis and remission of his psoriatic arthritis after surgical management of primary biliary cirrhosis with porto-caval anastomosis [15]. Another article reported 3 patients with psoriasis treated with ursodeoxycholic acid for nonalcoholic fatty liver disease that experienced marked resolution of their psoriasis [16]. These studies highlight the possible role of cholestasis and liver disease in the pathogenesis of psoriasis.

Genetics of cholestasis both skin conditions

The Gene of PIFC1 ATP81 has been suggested tobe related to vitiligo. Other genes are more associated with autoimmune related cholestasis like IL2RA for vitiligo and primary sclerosing cholangitis. Another example is TYK2 which is probable link between psoriasis and primary biliary cholangitis [17]. However, no link between PIFC2 and vitiligo or psoriasis yet.

The PFIC2 is a rare disease and has no previous reports of associations with psoriasis or vitiligo. This article presents the rare coexistence of psoriasis and vitiligo with a rare genetic disorder. Biliary cholestasis might have a role in the pathogenesis of psoriasis as described in previous literatures. Further research is required to delineate these hypotheses.