Conclusions: Ingestion of cola and pepsi cola could inhibit burn repair and physics strength of the healed tissues, also reduced serum EGF and VEGFR levels. Such, burned patients should limit or cease to drink carbonated beverages.

Skin burns can result in obvious changes in the burned areas and systemic reactions [12]. Severe burns lead to ultimately the pathological influences in the burn tissues. Inflammatory cells surrounding the microvasculature promote new angiogenesis through VEGF [13,14]. VEGF accelerates tissue repair by improving vascular permeability, and enhancing the proliferation of endothelial cells [9,15]. VEGF exert its actions by combining specific VEGF receptors expressed on endothelial cells to induce vasculogenesis [16]. However, it remains unknown what the quantitative correlations exist between skin burns repairs and levels of blood glucose, serum EGF and VEGFR as well as tensile strength [3,13]. Up to date, no researches have recorded whether ingestion of carbonated beverages impacts the repair process of skin burns during burn therapy.

The present study was conducted to assess comparatively the effects of coca cola and pepsi on burn healing, tensile strength and levels of blood glucose, EGF and VEGFR in rabbits, as well as to provide scientific bases for reasonably drinking carbonated beverages during therapy of the wound patients.

Thirty female Japanese white rabbits, 3 to 4 months old, were purchased from Experiment Animal Center, Lanzhou University (License No. SCXK (Gansu) 2005-0007) and prefed for one week. The animals were randomly allocated into three groups (n=10, weighing 2.12 ± 0.68 kg): coca colatreated group, pepsi cola-treated group and Control Group (CG). After the hairs were clipped and shaved, the dorsal chest was disinfected with 5% iodine tincture. Rabbits were anesthetized by intramuscularly injecting 0.2 mg/kg xylazine. 10 ml of 0.5% procaine hydrochloride was subcutaneously injected into this region of every rabbit. Each rabbit was cauterized for 10 s with a broil-hot metal sheet of 3 cm diameter twice to make the second-degree cauterization burn and let the surface open (on d 0). Penicillin of 400000 IU and 0.4 g streptomycin were strewn on the burn areas for 5 d to prevent infection. All rabbits were accurately weighed each day using an electronic balance, and raised in the rabbit cages equipped with automatic water dispensers in the experimental room. The room was maintained at 22-24°C and 30% to 50% relative humidity. All rabbits ingested allodially the commercial diet for rabbits (Lanzhou Taihua Feed Co. Ltd, China).

Morphological observations and measurement of the injured areas

The exudates and morphological alternations of burn surface were detected every day. The largest diameter of the burn location was daily detected using a vernier caliper until the finish of burns repairs. Burn repair period (days) was recorded for each rabbit.

Blood glucose levels were determined utilizing glucometer (Arkray Inc. Japan). Serum levels of EGF and VEGFR were detected with Elisa kit of EGF and VEGFR for rabbits on the basis of the instruction manual (Shanghai Bangyi, Biological Technology Co. Ltd, Shanghai, China). The tests were executed in triplicate.

After the burn healing of all rabbits was completed, the rabbit was anesthetized by injecting intramuscularly 0.2 mg/kg xylazine. 10 ml of 0.5% procaine hydrochloride was subcutaneously injected into the healed burn location. A piece of full thickness skin of 1.5 × 3 cm was harvested aseptically from this region. Skin specimen was mounted on the tension meter (Omega D670-44, CA, USA) and then stretched. Tensile strength was determined when the skin was ruptured [17].

Data are presented as means ± standard errors. Statistical analysis was performed with SPSS version 18.0 (SPSS Inc., Chicago, IL, USA). After square root transformation of the data, all variables complied with the assumptions of one-way Analysis of Variance (ANOVA). Post-ANOVA comparisons between groups were carried out using the contrast option under the general linear model procedure (Scheffe test). Pvalues< 0.05 were considered significant.

We evaluated macroscopic changes at the skin cauterization burn sites in coca cola-treated, pepsi cola-treated and control groups, respectively. The images were taken on days 0, 3, 7, 10, 14 and 18. Burn sites exhibited a similar morphology in three groups on day 3 post-burn. In control group, the local skin was swelled on d 1. Massive serous fluid was exuded from the burn surface (Figure 1). Then the serous secretion decreased from d 3. The burn area became dry gradually. Germinal layer of epithelium regenerated obviously. Granulation tissues were formed on burned surfaces on d 10, and they covered the whole surface on d 14. The scar was produced in burn location. Rabbits of coca cola-treated and pepsi cola-treated groups exhibited a delayed burn repair as compared with the control group. 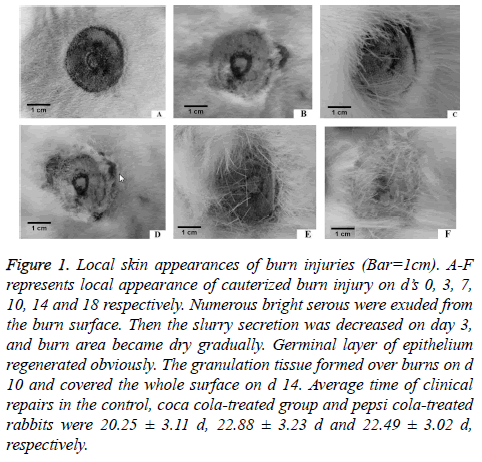 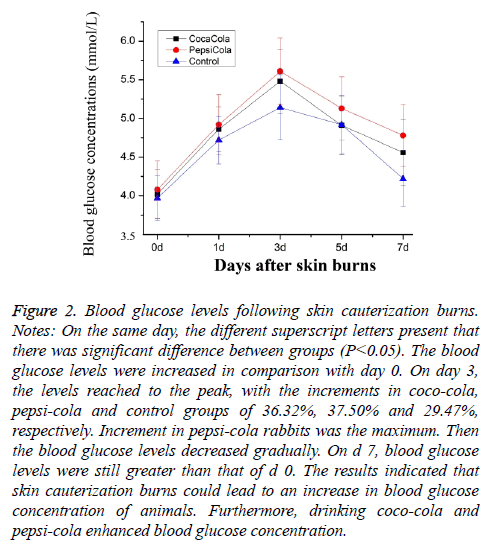 Serum EGF levels: EGF levels of all rabbits decreased during the burn repair (Figure 3). On d 3, the values reached the bottom. EGF level in coca cola-treated group was significantly less than that of control group. The findings demonstrated the second-degree cauterization burns could reduce serum EGF level. 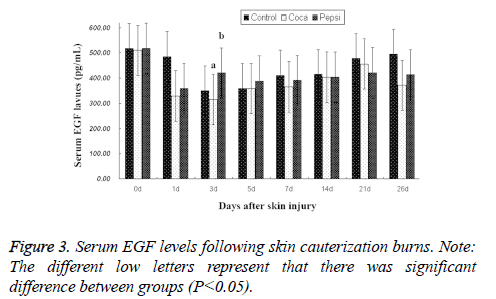 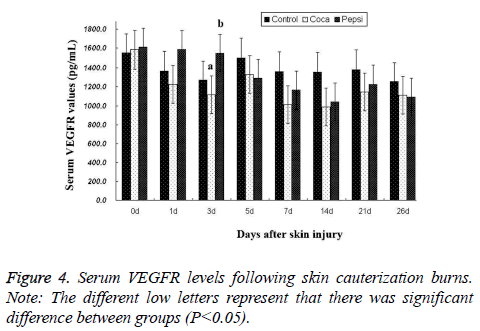 The vasculogenesis plays an important role in the skin maintenance and repair and relies on the participation and coordination of various cells [22]. Numerous factors influence angiogenesis and wound healing process [23]. Growth factors including EGF and VEGF are key modulators during wound healing. They are employed to wound therapy [23,24]. EGF and VEGF stimulate cellular migration, proliferation and angiogenesis. EGF enhances epidermal regeneration, cell motility and proliferation. VEGF is potent proangiogenic growth factors of the skin [25]. Sufficient VEGF levels promoted remarkably wound healing [23,26]. Currently, it is unspecified how VEGF contributes to skin wound healing by binding to VEGFR [25,27].

Previous study recorded there were no differences of VEGF and VEGFR levels between the control group and 10 mg/kg sildenafil group in severe scald burn in rats [28]. VEGF and VEGFR expression levels of partial-thickness scald rats were increased as compared to normal rats [29]. An investigation had indicated there was a remarkable expression of the EGF gene in burn wound, especially in the edge part of the burn surface [14]. Unfortunately, expression assay of EGF gene was not performed in our study. Our study revealed that serum EGF levels of all rabbits were decreased after the second-degree skin cauterization burns were made. The least EGF level was detected in coca cola-treated group on d 3. Serum VEGFR levels were decreased during skin cauterization burn repair levels with a maximum reduction in coca cola-treated group on d 14 post skin burns. Our findings were consistent with early documents [28,29].

Adequate tensile strength and biomechanical properties of the wounds depend upon the biochemical composition of the wound during the late remodeling stages of the wound healing [8]. The current study demonstrated that coca cola and pepsi cola during could reduce tensile strengths of the burned rabbits. The findings need to be thoroughly verified in additional animals.

Our data revealed that drinking coca cola and pepsi cola during burn healing could enhance blood glucose levels, inhibit wound contraction velocity and decrease physics strength of skin. Then they suppress the burn healing. Therefore the burned patients have to limit or cease to drink carbonated beverages so as to accelerate wound healing.

None of the authors has any potential financial conflict of interest related to this manuscript.

Professor Gong Zhuandi detected the receptor gene expressions, and revised the manuscript critically for important intellectual content. Miss Lai Luju conducted the morphological observations. Miss Deng Yingying did the data statistics analyses. Miss Liang Haoqin did the ELISA assay and the data statistics analyses, and detected the morphological changes. Professor Wei Suocheng was responsible for the conception and design of the study experimental and writing the manuscript. All authors have approved the final version to be submitted.

The work received the support of the National Natural Science Foundation of The People’s Republic of China (Grant No. 31460684), the Innovation Team Project for Animal Medical and Biological Engineering of Ministry of Education of China. The manuscript was checked using Ginger tools online.