This study aims to analyse the clinical efficacies of electrocardiogram (ECG) in diagnosing cardiac autonomic dysfunction (CAD) and to explore the clinical values of this method. A total of 82 CAD patients clinically diagnosed and confirmed were selected for the traditional Chinese medical treatment and psychological intervention. After three courses of treatment, their ECG were monitored, and the diagnostic results before and after the treatment were then compared. Before the treatment, the abnormality rate of the patients ECG diagnosis was 100%; while after the treatment, the rate was reduced to 10.98% (9/82). The intragroup comparison showed that the post-treatment abnormal ECG rate was significantly reduced and exhibited statistically significant difference with that before the treatment (P<0.05). Meanwhile, after the treatment, such clinical symptoms as palpitation, shortness of breath, or precordialgia were significantly improved, and the symptoms in 73 patients totally disappeared. The application of ECG in the clinical diagnosis of CAD was non-invasive and simple, and had high detection rate and accuracy; therefore, it had high clinical values and was suitable for wide promotion.

Cardiac autonomic dysfunction (CAD) is the syndromes of cardiovascular dysfunction caused by the cardiac autonomic function disorders [1,2], though it does not belong to cardiac organic disease, its incidence has been significantly increased in recent years, and the incidence focuses in young adults at the age of 20 ~ 40 years old; the incidence in female is slightly higher than that in male. Because the clinical manifestations of CAD were palpitation, shortness of breath, and precordialgia [3], which were very similar to those of organic cardiac diseases, not only the difficulties of clinical diagnosis were increases, but also the patients would have more psychological burdens because of the doubts about the disease, and these were not conducive to the treatment of CAD [4]. Dynamic electrocardiogram (ECG) could diagnose CAD accurately and simply [4]. In order to accurately diagnose CAD and perform the symptomatic treatment as early as possible, we sampled 82 CAD patients to analyse the diagnostic values of their ECG results, and the study was reported below.

A total of 82 CAD patients clinically diagnosed and confirmed in our hospital from January 2013 to January 2015 were selected. All the 82 patients met the following inclusion criteria: 1). had different degrees of palpitation, shortness of breath, and precordialgia, and these symptoms lasted for >150 days [2]; 2). Between 20 and 40 years old; 3). ECG results revealed abnormalities of ST wave band, T wave, and heart rate variability. Meanwhile, through blood routine, urine routine, and hepatonephric function examinations, patients with heart diseases, myocarditis, and diabetes were excluded [3]. Among the 82 qualified patients selected, 35 were males and 47 were females, with the average age as (32.6 ± 3.2) years (Table 1). This study was conducted in accordance with the declaration of Helsinki. This study was conducted with approval from the Ethics Committee of Henan Provincial People’s Hospital. Written informed consent was obtained from all participants.

Table 1. General information of patients and some results in this study.

The main treatment was psychotherapy, aiming to eliminate the patient's fear and pressure. Meanwhile, necessary medical treatment was supplemented according to the principles of reinforcing Heart and tranquilization; the traditional Chinese medicine Ganmai dazao decoction was used for the treatment, with 10 days as a course for three courses [5].

At the end of the three treatment courses, dynamic ECG monitoring was performed three times, and the duration should be >20 h; the ECG monitoring results were recorded.

± s) and performed the t-test, with P<0.05 considered as statistically significant difference. 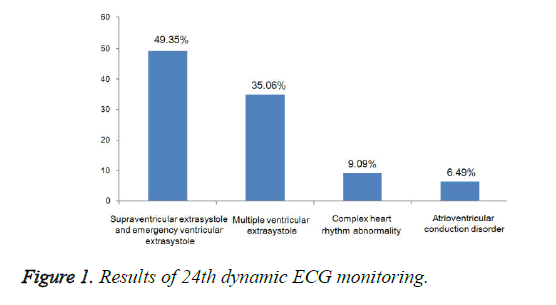 After the treatment, such clinical symptoms as palpitation, shortness of breath, and precordialgia in this study were significantly improved. Of these, the symptoms in 73 patients disappeared completely, and the clinical improvement rate was 89.02% (Table 1, Figure 2). 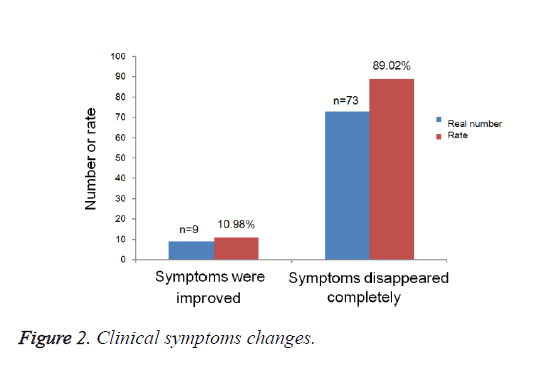 The syndromes of cardiovascular dysfunction caused by the autonomic dysfunction while without heart organic disease are named CAD [6,7]. With the accelerated pace of life and the gradually increased pressure, the incidence of ACD is continuously increased and shows the trend towards younger adults; women between 20 and 40 years has become the highrisk population of CAD [8,9]. This study investigated the clinical values of ECG in diagnosing CAD, aiming to lay solid foundations for further clinical diagnostic work.

From the pathogenesis of CAD, fast pace of life, lack of sleep, or too much pressure were important factors towards the occurrence of CAD [13,14]. Under the joint effects of these factors, the body's sympathetic nerve and autonomic nerve might difficultly maintain the balance, so it would be easy to result in the dysfunction. Palpitation, shortness of breath, and precordialgia are the main clinical manifestations of CAD; meanwhile, patients might produce intense and other negative emotions because of pain, which virtually increased the psychological pressure of patients [15]. and would have some impacts on their normal work and lives.

Currently, there is still lack of unified and standard diagnostic criteria towards CAD, and what detection method should be used to confirm this issue is still a big controversy among medical fields. Based on this situation, we mainly used the symptom diagnosis and exclusion diagnosis to confirm the diagnosis. Dynamic ECG monitoring is simple and noninvasive, and could be easily accepted by patients; therefore, it could be used as the diagnostic evidence of CAD. In addition, other examination methods such as patient’s medical history, enzymology, ultrasound, or x-rays could be combined for the comprehensive judgment and correct diagnosis, which could then eliminate patient’s psychological fear of heart disease, improve the mental condition, facilitate physicians to achieve symptomatic treatment, and make the patient recovered as soon as possible [16,17].

Because ECG was the main signal detection way for heart diseases, which could quickly and accurately capture the instantaneous heart rate changes and waveform abnormalities [18,19], it could provide certain basis for the diagnose of CAD. This study investigated the clinical significance of ECG in diagnosing CAD.

The twice 24 h dynamic ECG monitoring towards the 82 patients revealed that a total of 77 patients exhibited abnormal heart rate indexes and waveforms, with a little higher abnormality rate as 93.9%. The abnormality rates in ST wave band or T wave were higher, and most of them appeared when the heart rate increased, so the frequency of the abnormality rate was positively correlated with the heart rate. Meanwhile, comparing the ECG monitoring results before and after the treatment revealed that the post-treatment abnormality rate was significantly reduced than that before the treatment, and the difference was statistically significant (P<0.05). In addition, after the treatment, such clinical symptoms as palpitation, shortness of breath, or precordialgia were significantly improved, and the symptoms in 73 patients totally disappeared; the clinical improvement rate was 89.02%. These results fully demonstrated that the clinical data of dynamic ECG could be used as the diagnostic evidence of CAD, consistent with Corazza et al. [20], indicating that ECG had high clinical values in diagnosing CAD. In summary, the application of ECG in clinically diagnosing CAD was non-invasive and simple, and had high detection rate and accuracy; therefore, it had high clinical values and was suitable for wide promotion.