Objective: To investigate the therapeutic efficacy of acupuncture of Yanglingquan point for the treatment of hemifacial spasm (HFS).

Results: The response rates in the experimental group and the control group were 96.7% and 56.7%, respectively, with a significant difference between the two groups.

HFS is a common clinical disease as well as one of the recurring diseases clinically [1]. It is manifested as irregular spasm of facial muscles, which usually involves the mouth and cheeks and sometimes the eyelids and corners of eyebrows, etc. Such symptoms as spasm of lateral muscles and difficulties in opening eyes may occur. Some of the HFS treatments are investigated such as botulinum toxin injections [2,3], microvascular decompression [4,5] and carotid artery [6]. Herein we collected 60 patients with HFS admitted as the clinical outpatients from June, 2010 to September, 2015, and they were randomly divided into two groups, with 30 patients in the experimental group and the control group, respectively.

The 60 patients we collected included 30 males and 30 females aged 23 to 57 years. They had disease duration of 1 month to 2 years, and they were randomly assigned to two groups.

Table 1: Disease conditions of the experimental group before the treatment.

Table 2: Disease conditions of the control group before the treatment.

Patients who did not meet the above criteria, who could not receive treatment persistently and who could not promise not to accept any treatment in addition to this one were excluded.

Acupoint selection: The contralateral Yanglingquan point of the lesions was used. The Yanglingquan point is located at the depression below the anterior fibular head of the lateral calf, and its anatomical levels are skin, subcutaneous tissue, deep fascia of calf, peroneus longus and peroneus brevis. The lateral sural cutaneous nerves are distributed in the shallow layer, and there are lateral superior genicular arteries and veins in the deep layer.

Operations: The filiform needle (acupuncture needle) manufactured by Beijing Zhongyan Taihe Medical Devices Co., Ltd. was selected and its specification was 0.5-1.0 inch. The patient was placed in the supine position, and the contralateral Yanglingquan point of the lesion was used. After the routine local disinfection, the needle was quickly pierced using hand holding and clamping techniques, and then the twisting and turning as well as lifting and thrusting techniques were performed. When patients have an obvious sensation of qi, the substantial twisting and turning back and forth were conducted for 2-3 times, and then the lifting and thrusting techniques were carried out for 4-6 times, so that patients could have a strong sensation of needling. The intensity should be based on the patient’s tolerability, and the needle was withdrawn 15 minutes after the retaining of the needle. Subsequently, acupuncture was performed once a day, and 7 times constituted a circle. The efficacy was subjected to statistics after two circles.

Operations: The 1ml syringe and No.5 syringe needle were selected, and 1.0ml (500 μg) of vitamin B12 injection was drawn every time. The syringe was taken out from the package, and the bevel of the needle and the scales of the syringe were kept to the same horizontal level and tightened. A check was performed to see whether the syringe leaked or not. Then the drug was drawn and the air in the syringe was exhausted. The doctor used his forearm to drive his wrist, so that the needle could be pierced into the skin of the patient's acupoint quickly. The patient was placed in a sitting or supine position, and the needle was pierced by 0.5 inch after the injection point was routinely disinfected. After no blood was found during the withdrawing of the needle, 0.5 ml of vitamin B12 injection was slowly injected. The injection was performed every 5-7 days, and 7 consecutive days constituted a circle, and the interval between the two circles is about 3 days. The efficacy was subjected to statistics after two circles.

Effective: The frequency, time, and grade of spasm of the HFS were significantly reduced.

Improved: The frequency, time, and grade of spasm of the HFS were reduced.

Ineffective: No significant changes occurred as compared with conditions before treatment.

We divided two groups of patients before treatment, the same grade of patients were random selected into two groups, the number of each grade of HFS is almost the same, the difference can be ignored; only can be judged twitch effects were compared between the two groups after treatment. The curative effect evaluation standard from doctors’ objective observation in the degree and the frequency of occurrence of convulsions, combined with their own subjective feelings (Tables 3 and 4 and Figures 1 and 2). 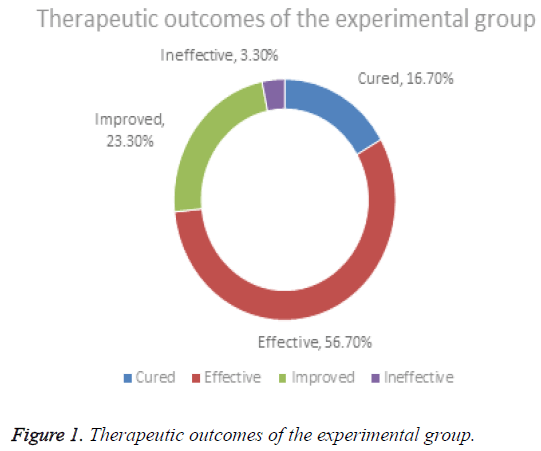 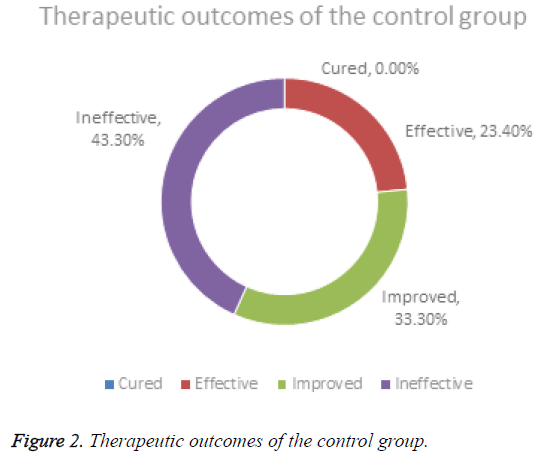 As is shown in Figure 3, the comparisons between the efficacy of acupuncture of contralateral Yanglingquan point and the injection of vitamin B12 at the acupoint showed that the former is much better than the latter (Table 5). The statistical analysis showed a significant difference (P<0.1), and the efficacy of the experimental group was significantly superior to that of the control group. This method shows such advantages as small invasions, high efficacy and uniqueness in methods.

Table 5: Comparison of therapeutic efficacy between the two groups. 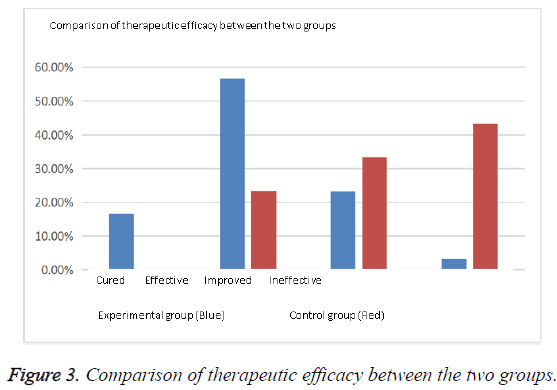 Figure 3: Comparison of therapeutic efficacy between the two groups.

The pathogenesis of HFS in the current clinical studies is not clear, and there are few treatment options for it. Currently, it is mostly considered to be associated with some special stimuli on the facial nerve pathways, and some patients may be due to the arteriosclerotic expansion of the vertebral-basilar artery system, or the demyelination degeneration after facial neuritis and inflammation of the cerebellopontine angle [7,8]. The commonly used Western medicine therapy nowadays is surgery, while its efficacy was poor. There is also another point of view that the compression of the root exit zone (REZ) of facial nerve by blood vessels is considered to be a common cause of HFS [9,10]. Secondly, space-occupying lesions are also a reason for the development of HFS, namely "secondary HFS," such as cerebellopontine angle tumors, arteriovenous malformation, aneurysm and arachnoid cyst, etc. Other causes include sequelae of facial neuritis, multiple sclerosis and familial causes. The pathogenesis of HFS may be the ectopic excitation of facial nerves or pseudo-synaptic transmissions [11-13].

Currently there are two main hypotheses [14], the "short-circuit hypothesis": The REZ segment was unmyelinated, and was impaired due to the long-term vascular compression. The exposed axons contacted with each other, and ectopic impulses transmitted across the synapses occurred between nerve fibers. 2, the "kindling hypothesis": The REZ segment was subjected to vascular compression, and the pulsatile stimulation of blood vessels was similar to ignition, and therefore, antidromic impulses were generated and induced the increase in the excitability of the facial nerve nucleus and activation of stationary synapses, thereby resulting in HFS. Currently the established cases of HFS induced by REZ of facial nerve under vascular compression account for about 80% to 90% of all cases [15]. Besides, other locations under vascular compression (such as the labyrinthine artery and other mutant aortas, such as the vertebral artery and the basilar artery) form the compression of facial nerves, resulting in HFS [16]. Literature in recent years shows that there are roughly 3 types of vascular compression: single vascular loop compression (which accounts for the largest proportion, roughly 75% to 85%), multi-point compression (7% to 16%), and compression induced by vessels penetrating facial nerves (which accounts for the minimum proportion, 1% to 2%) [17].

The Insights into the Origin of Miscellaneous Diseases records that tendons exist for constricting bones, tripping flesh and stretching skin, and they represent the key of human bodies and benefit their movement. Modern medicine believes that tendons are mainly composed of muscles, fascia, ligaments and other systems and are the general term for the human muscle system. They not only include the substance of tendons, but also the function and structure of tendons. The Yanglingquan point is below the knee. Suwen (Basic Questions) records that tendons are located in the knee and acupoints belong to tendons. So acupoints are closely related to the function and structure of tendons. Analysis according to the TCM theory shows that HFS is an abnormal state of facial muscles, and the Yanglingquan point is the he-sea point of the gallbladder meridians of Foot-Shaoyang. According to Lingshu (Spiritual Pivot), “qi in veins joins at the he-sea point”. He-sea point is the acupoint with the strongest qi in veins, like all rivers joining the sea. Therefore, as the he-sea point of gallbladder meridians, Yanglingquan is the acupoint with the strongest qi in meridians of gallbladder meridians. One gallbladder meridian flows through Fengchi point to the middle of the ear and the front of the ear to the outer canthus. The other gallbladder meridian branches at the outer canthus, goes down to Daying point, joins the triple energizer meridian of Hand- Shaoyang at the eye socket, goes down to the supraclavicular fossa via Jiache point and the neck. It can be seen from it that the circulation sites of the gallbladder meridian includes the position of facial muscles, so gallbladder meridian can be used to treat facial muscle diseases. While the Yanglingquan point is the site with the greatest qi of the gallbladder, so it is the best candidate option for the treatment of lesions at the circulation sites.