For AFP operation patients, surgeons firstly adopted fistula brush and hydrogen peroxide instillation to clean fistula and identify the location of anal fistula. Meanwhile, the tract was not curetted to avoid enlarging or damaging the fistula tract. Then, the fistula brush was inserted in the fistula track and AFP device (C-AFP-0.6 × 9.5, BiodesignTM Surgisis), which was submerged in 0.9% saline for 1~2 min before use, was implanted into the internal opening of fistula track by connecting the internal end of fistula brush until resistance was felt and then fixed in this place with vicryl 2-0 stitche. Afterwards, the external orifice of the fistula was not completely occluded so that the track could drain and excess AFP materials that remained outside the external opening of the fistula were removed. Finally, the operations were considered successful if the fistula was not obviously infected and drainage was totally stopped at least 6~12 w.

For incision-thread-drawing operation patients, surgeons firstly used a probe or methylene blue to determine the entire fistula tract’s position. Then, care was taken to ensure that a long fusiform incision along the external orifice lesion tissue was made for drainage, the inflammatory tissues, necrotic tissues and scars of fistula were remove with a curet, and the fistula was also excised until anal sphincter verge at the level of the external opening was encountered. A probe was placed in the external orifice of fistula and gently withdrawn through the fistula. Thereafter, a rubber band was inserted into the probe using blood vessel forceps clamps and tightly tied on the probe with silk thread to maintain a constant tension. Finally, these materials were fixed on crissumm, meanwhile wounds were cleaned using methylene blue+lidocaine solution and filled with Vaseline gauze. In addition, sterile gauze was externally applied to fix the wounds.

The detailed results about all indicators of postoperative assessment were displayed in Table 2.

In addition, the length of healing was (31.96 ± 2.54 d) in AFP group, whereas that was (39.44 ± 12.42 d) in incision-threaddrawing group. Moreover, the medium healing time was 33 d (rang 26~36 d) and 40 d (rang 26~36 d) in AFP and incisionthread- drawing groups, respectively. By t-test analysis, we discovered that there were a remarkably difference in the length of healing between the two groups (t=-3.06, P=0.005), indicating that the recovery speed in AFP group was faster than that in incision-thread-drawing group.

The results exhibited a statistical difference (t=-8.74, P<0.001) that the scar area was (0.33 ± 0.12 cm2) in AFP group, but the scar area was (3.06 ± 1.62 cm2) in incision-thread-drawing group. Therefore, these data revealed that the invasive impairment in AFP treatment was obviously lower than that in incision-thread-drawing group.

The evaluation of the preoperative pain showed that there were no significant differences in NRS score between AFP and incision-thread-drawing operations. Moreover, the NRS scores in patients with AFP operation were gradually decreased over time except for the first day when parecoxib sodium was given to relieve pain once a day (Figure 1). Nevertheless, the NRS scores in patients with incision-thread-drawing operation were also declined with time except for the first and third day when ketorolac tromethamine or parecoxib sodium was used to relieve pain twice a day (Figure 1). At other days after surgery, the patients of the two groups were commonly administrated with celebrex or didofence sodium enteric-coated tablets to alleviate pain (Figure 1). Overall, the NRS scores at every day of one month after AFP surgery were significantly lower than those after incision-thread-drawing surgery (P<0.001). 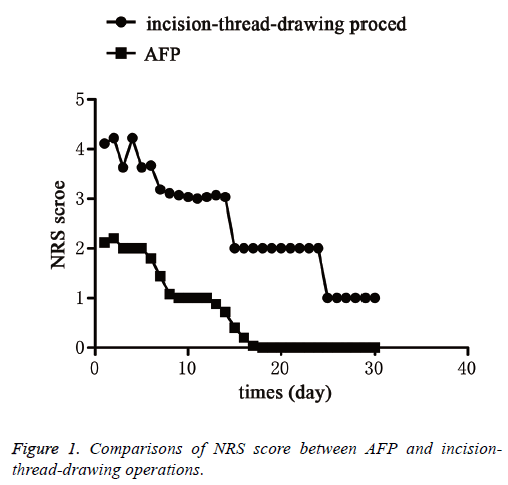 The absorption of AFP 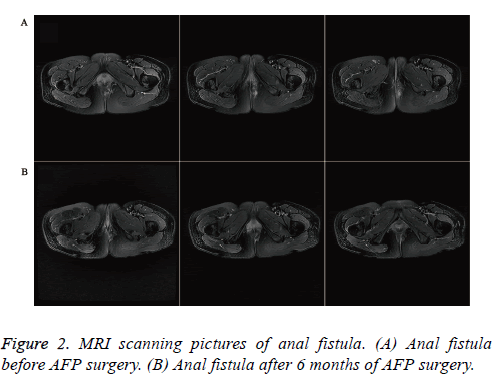 Taken together, we revealed that in comparison with incisionthread- drawing operation, AFP had an easier operation, made a smaller surgical trauma, shortened the healing time and avoided the anus function impairments. However, based on these results analysed by a retrospective analysis, in-depth investigations need to further confirm the accuracy of our conclusion by larger samples and multi-centered randomized controlled trials, etc. in the future.

This study was performed after the approval of the Medical Research Ethics Committee and has therefore been performed in accordance with the ethical standards laid down in an appropriate version of the Declaration of Helsinki (as revised in Brazil 2013).

Written informed consents obtained from all participants included in the study.