Material and Methods: In the last 10 years at our hospital, 40 patients have been diagnosed with hematopoietic malignancy superimposed with solid tumors. Their clinical characteristics and therapies were summarized. Cytogenetic analyses were performed using quinacrine fluorescence and trypsin- Giemsa banding techniques. Overall survival rates were estimated using the Kaplan-Meier method.

With improvements in malignancy therapy, the survival time of patients has been prolonged. However, it is noteworthy that the incidence of secondary malignancies has been gradually rising, along with the successful treatment of first malignancy. Secondary malignancy, for which the possibility of it being a metastatic tumor has been ruled out, is distinct from the original disease, and it presents an independent picture of malignancy [1,2]. The latency time between first malignancy diagnosis and secondary malignancy diagnosis ranges from several months to decades. It has been reported that the latency period may depend on the cumulative dose or dose intensity of the previous cytotoxic or other specific therapy agents [3].

In recent years, most studies have focused on therapy-related myeloid neoplasm (t-MN, including therapy-related Myelodysplastic Syndrome (t-MDS)) and therapy-related Acute Myeloid Leukaemia (t-AML), which occurs after radiotherapy or chemotherapy for solid tumor. Studies of secondary primary solid tumors have been relatively less reported. Furthermore, the studies of superimposed malignancies of china are rarely reported. The clinical features and etiological characteristics of these two disease situations have been rarely compared or analysed. Herein, we summarize the general information, chromosome karyotype and prognosis of the patients who underwent hematopoietic malignancy superimposed with solid tumor at our hospital during the past ten years, and we discuss what conclusions can be drawn for tumor therapy.

Patient samples were obtained with approval from the ethical committee at the First People's Hospital of Changzhou, Jiangsu province, China, and informed consent was obtained. From 2006 to 2015, after clinical, morphologic and genetic reviews in our department, 40 consecutive patients were confirmed to have been diagnosed with superimposed malignancies, including one case of hematopoietic malignancy. The latency interval was defined as starting with the diagnosis of the first malignancy and ending with the diagnosis of the secondary malignancy. When evaluating the latency interval and survival, and we ruled out the 3 patients who developed 2 malignancies at the same time; therefore, we analysed only 37 patients.

Most of the 40 patients had been treated for their first malignancy at our hospital. All hematopoietic malignancies were diagnosed from marrow aspirates or marrow biopsy sections or lymph node biopsy. The first hematopoietic malignancies were primarily treated with chemotherapy; parts of the tumors were treated with immunomodulatory therapy or ionizing radiation in addition. All solid tumors were diagnosed through pathology and clinical manifestation. The first solid tumors were treated with surgical resection, ionizing radiation, chemotherapy, immunomodulatory therapy, or combination therapy, according to the type and stage of the disease. Treatments administered to patients after the development of secondary malignancies were individualized, ranging from supportive care only to intensive chemotherapy. If one malignancy was relatively stable, the treatment emphasis was on the other malignancy. If two malignancies occurred at the same time and the staging was similar, then the treatment was performed considering both malignancies, and the purpose of treatment was to prolong the patients’ overall survival as long as possible. Clinical data and details were collected from a review of each patient’s medical history. Patients were followed up until death or through October 2015.

Cytogenetic analyses were performed on bone marrow cells from aspirates obtained at the time of diagnosis using quinacrine fluorescence and trypsin-Giemsa banding techniques. Metaphase cell estimates were obtained from direct preparations and from 24 or 48 h non-irritant cultures. Cytogenetic abnormalities are described following the criteria of the International System for Human Cytogenetic Nomenclature [9].

All statistical analyses were performed with SPSS 18.0 software. Qualitative variables were analysed with chi-squared tests or the Fisher’s exact test. Continuous variables were compared using Student’s t test or the Mann-Whitney U test. Survival rates were estimated using the Kaplan-Meier method. Overall survival was the interval between the diagnosis date and death. All statistical tests were 2 tailed, and P values less than 0.05 were considered to be statistically significant.

Table 3. The latency intervals of superimposed malignancies patients who stratified according to age.

Table 5 shows the treatment for first malignancy in 2 different superimposed malignancies groups. Among the 13 patients who were diagnosed with hematopoietic malignancy first and then developed solid tumors, most underwent primary treatment with chemotherapy (12 of 13 patients, 92.3%). Among the 24 patients who first developed solid tumors and then developed hematopoietic malignancies, 12 patients (50%) underwent surgery resection, 11 patients (45.8%) underwent chemotherapy, and 6 patients (25%) underwent radiation therapy. A significant difference was observed between these two superimposed malignancies groups (P=0.0013) compared with the primary therapy group. 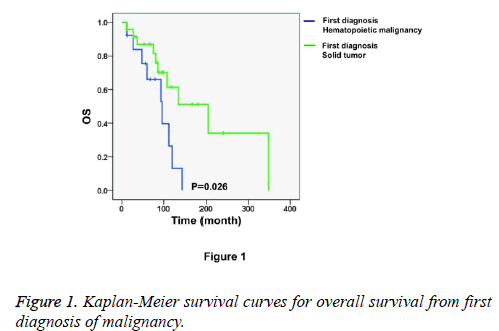 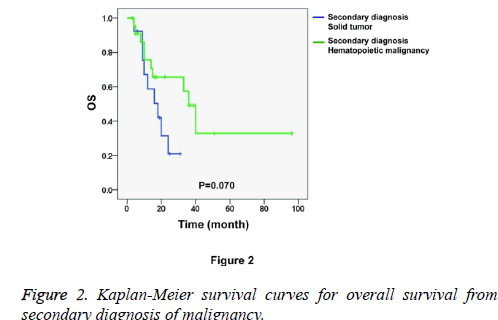 Advances in malignancy therapy and supportive care measures have led to substantial improvements in long-term survival for malignancy patients. However, one of the most severe side effects following successful malignancy therapy is the occurrence of secondary malignancy. Secondary hematopoietic malignancy was the first reported carcinogenic effect of malignancy treatment. At present, secondary solid tumors have become more recognized and reported more frequently. Treatment of a pre-existing disease using chemotherapy, ionizing radiation therapy, surgery, or a combination of these modalities may lead to another destructive therapy-related secondary malignancy (solid tumor or hematopoietic malignancy) [10-13]. Chemotherapeutic agents or ionizing radiation may induce malignancy in the same manner that they cause DNA damage, which further results in mutations and translocations through DNA double-strand breaks and loss of DNA mismatch repair elements, with consequential genomic instability [14,15].

The authors have no financial relationship to disclose.

No conflicts of interest exist.