#The authors contribute equally to this paper

Peripheral arterial disease (PAD) was a common and frequently occurring disease, mainly involving the lower section of the abdominal aorta, iliac artery, femoral artery, popliteal artery and others. The clinical manifestations were symptoms such as intermittent claudication and limb ischemic pain, even necrosis [1], with a high mortality and morbidity [2]. According to the guidelines published in the Trans-Atlantic Collaboration Consensus (TASC) meeting in 2000 [3] and TASCII meeting in 2007 [4], arteriosclerosis obliterans of lower limbs was divided into 4 types, it was proposed that type A and B lesions were more suitable for endovascular treatment, and type C and D lesions adapted to surgical treatment. However, with the advancement in interventional techniques and intervention materials, as well as the improvement of efficacy and success rates in interventional therapy, more and more patients with type TASC-C and D aortoiliac and femoropopliteal arteriosclerosis obliterans chose endovascular treatment [5-8]. Torres-Blanco et al. [9] obtained that endovascular treatment for TASCII-D lesions was safe by analyzing the interim results of endovascular treatment for TASCII-D lesions, and the satisfactory results were obtained. From December, 2012 to December, 2015, 20 patients with occlusion of long-segment iliac artery in People's Hospital of Ganzhou City were performed endovascular treatment, the lesion type was TASCII-D. In this paper, a retrospective analysis of the above cases was carried out, and the treatment effect was evaluated. It was reported as follows.

A total of 20 male cases with a total of 29 limbs, aged 48 to 80 years old, with duration of 0.5 to 36 months were selected, including 7 cases with simply iliac artery lesions, 2 cases with iliac artery occlusion, 11 cases with iliac artery combined groin following arterial occlusion. All iliac artery occlusive lesion length were more than 10 cm, the TASCII type was D. According to Rutherford classification criteria [10], 2 cases belonged to class 3, 6 cases to class 4, 5 cases to class 5, 7 cases to class 6 (Table 1). The mean preoperative anklebrachial index (ABI) was (0.28 ± 0.12). The associated risk factors included hypertension in 9 cases, smoking history in 18 cases, hyperlipidemia in 13 cases, coronary heart disease in 4 cases, as well as 2 patients had a history of myocardial infarction, one case with coronary stents surgery history, 8 cases with diabetes history, 3 patients with a history of cerebrovascular disease, 1 case with rectal cancer surgery history. This study was conducted in accordance with the declaration of Helsinki. This study was conducted with approval from the Ethics Committee of People's Hospital of Ganzhou City. Written informed consent was obtained from all participants.

Cases with symptoms were in line with the diagnostic criteria of peripheral arterial disease (PAD), with associated symptoms were selected. The lesions were confirmed by preoperative ABI, vascular ultrasound, magnetic resonance angiography (MRA) examination, and meet TASCII-D-type classification criteria. 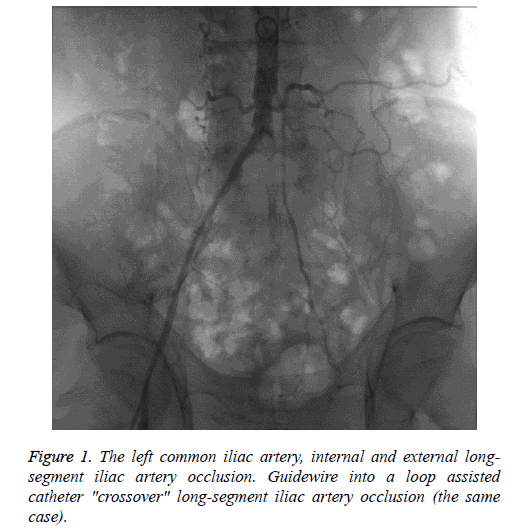 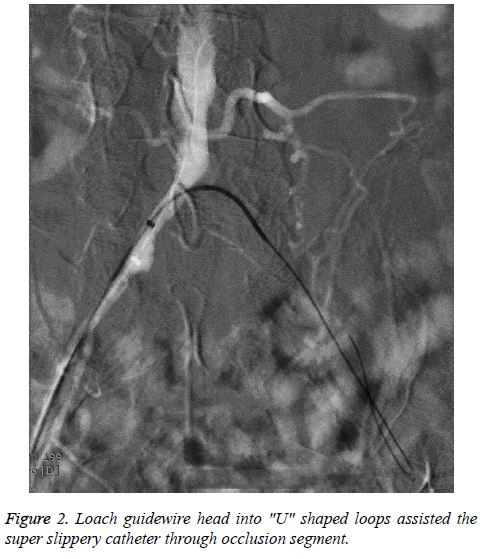 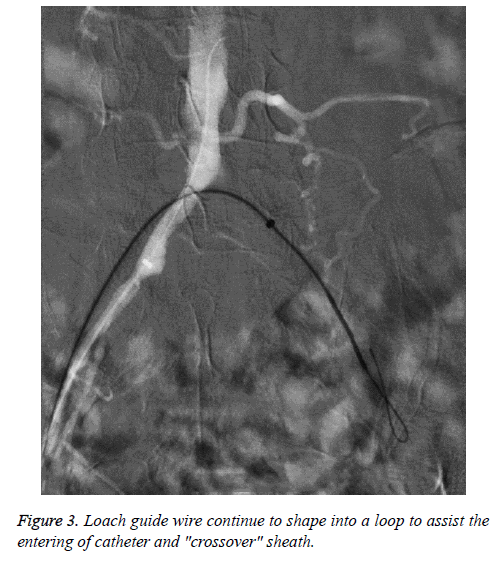 Figure 3: Loach guide wire continue to shape into a loop to assist the entering of catheter and "crossover" sheath. 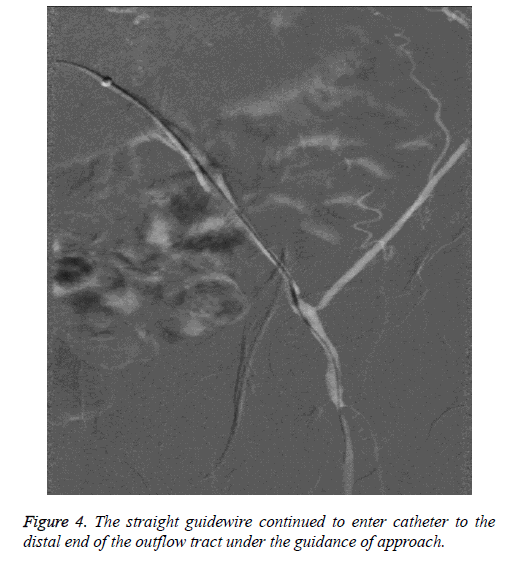 Figure 4: The straight guidewire continued to enter catheter to the distal end of the outflow tract under the guidance of approach.

Low molecular weight heparin anticoagulant therapy was carried out for 3-5 days, orally took aspirin and hydrochloric acid sarpogrelate, and single aspirin after three months. The review of ABI was performed about 1 week after surgery.

Clinic regularly follow up was carried out after discharge. The time points were the 1th, 3th, 6th and 12th month after discharge, following by one year later. The follow-up modes were ABI measurement, vascular ultrasound, MRA examination and others.

Two cases had lower abdominal aorta occlusion, all 29 iliac artery lesions were successfully opened, and eight cases accompanied by the groin following occlusion were also opened. One abdominal aorta bare stent, 29 iliac artery bare stents, and 9 groin following artery bare stents were used. The re-canalizing rate of iliac artery was 100%, and 72.7% for groin following lesions. The collateral circulation of the non-opened three cases with superficial femoral artery lesions was rich. The symptom of all patients was relieved, including intermittent claudication disappeared in eight cases, rest pain disappeared in 5 cases, foot ulcer healing in 5 cases, two cases had toe amputation. One week after surgery, the average ABI was (0.72 ± 0.21), the difference was statistically significant compared with that before surgery (P<0.05) (Table 2).

Table 2: Results of the operations.

All patients were planed to receive regular clinic follow-up. The follow up rate of 15 cases (18 limbs) was 75%, up for 3-24 months, with an average of nine months, the re-canalizing rate of iliac artery in the first phase was 94.4% (17/18), including 1 patient had blood clot formation within the iliac artery stenting on one side within the first 11 months, repeated intubation thrombolytic recanalization was performed, the secondary re-canalizing rate was 100%.

The main purpose of PAD treatment was to relieve symptoms, preserve limbs and reduce amputation. The treatment ways included traditional open surgery and rapid developed endovascular treatment in recent years. TASCII Guidelines [4] still recommended traditional surgical bypass surgery for the type D iliac artery lesions, because of its curative effect. However, the surgical trauma was big, recovery time was long, complications were more, with a certain degree of mortality [13]. The body situation of such patients was generally poor, with many and serious systemic diseases, so strike capability of tolerance surgery was poor. While the EVT had advantages such as minimally invasive, relatively simple operation, rapid recovery, fewer complications, can be repeated several times, easily accepted by patients [14], and may be carried out under local anesthesia, which reduced the risk of anesthesia. 12 cases of the patients in this study had severe lower limb ischemia combined coronary heart disease, diabetes, cerebrovascular and other systemic diseases, the general condition was poor. Miyamoto et al. [15] obtained TASCIID single iliac artery lesions were suitable for EVT by controlled study for TASCIIB and D single iliac artery lesions treatment effect. Ye et al. [5] performed Meta-analysis for the status of TASC-C and D aortoiliac arteriosclerosis occlusion disease by endovascular treatment, and believed that angioplasty and stenting implanting got a good close and mid-term results in treating TASC-C and D iliac artery arteriosclerosis obliterans. Baril et al. [16] believed that endovascular treatment for lower limb TASCIID lesions can improve hemodynamics in lower limb, got a higher limb salvage rate, but which needed for further follow-up to ensure the long-term efficacy of these interventions.

The long-segment iliac artery occlusion was often caused by arteriosclerosis, plaque formation or mixed thrombus ingredients. For plaque with occlusion as a main component, guidewire entering into the approach "crossover" was often hampered by hardened plaque, the catheter guidewire can easily rebound to the abdominal aorta, "crossover" failed. To obtain a valid support for guidewire brace, the "J" shape of guidewire head was molded into "U" shaped loop, the "U" shaped loop was used to provide tension on the vessel wall, the entering for catheter did not rebound into the abdomen aorta. In addition, because the loop head had big contact surface with the vessel wall, the guidewire was not easy to enter the collateral vessels, prompting the guidewire entered by breakthrough advances along the true lumen of iliac artery [17]. If the guidewire cannot enter the artery dissection via the occluded vessel true lumen, subintimal angioplasty (SIA) could be performed. In the study, the guidewire true lumen got through the iliac artery of 26 limbs, SIA for 3 limbs.

The lesion thrombus ingredients also needed to take seriously. PAD secondary thrombosis often had a history of a sudden worsening of chronic lower limb ischemia symptoms in the course of the disease, clinically manifesting as acute arterial occlusion features. Of the patients in this study, five cases had lame suddenly increase on the basis of intermittent lame symptoms, the presence of lesions in thrombus was confirmed according to the filming. If PTA was performed for such patients, thrombosis may shed into the distal due to balloon dilation. Therefore, if the preoperative or intraoperative PAD secondary thrombosis was suspected, CDT should be considered firstly in EVT process, further other measures could be taken in the following [18,19]. After catheter thrombolysis, some original long segment and complex lesions turned into short segments and simple lesions, which may be downgraded to TASCII C, B and A lesions, which reduced complications such as difficulty of operation and thromboembolism, shortened the bracket length and reduced the number of the stents used by patients, thereby reducing the cost and improving the occlusion of the re-canalizing rate [20]. In this study, 9 limbs had associated thrombotic lesions, and performed CDT to dissolve the mixed thrombus ingredient in lesions, then PTA+stent therapy. 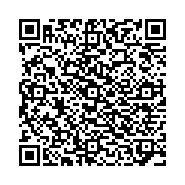