The aqueous leaf extract, after six weeks administration showed a decrease in weight of the treated animals, whereas body weight of the un-treated animals rose progressively as the period increased. Phytochemical screening of the plant reveals the presence of saponins, alkaloids and volatile oils. Pathological features like congestion of the lungs, metaplastic changes in the mucosal surface of the stomach, and necrosis of the kidney tubules were noticed.

These abnormalities may possibly not develop with C. ambrosioides used for a short period.

Natural products obtained from plants consist of biologically active substances. When ingested, these substances may have a local effect within the gut of the organisms or they may be absorbed into the blood stream to produce systemic effects. These actions may be useful, toxic or indifferent to the organism.

Chenopodium ambrosioides, Linn (family, Chenopodiaceae) locally known as “Arunpale” in Yoruba, “Kwima” in Swahili, “Ambarusya” in Arabic, is a polymorphic annual, and perennial herb which grows to a height of over 1m and covered with aromatic glandular hair. The common names are Mexican tea, Worm seed, Mexican goose-american, Gooxfoot [3] The plant originates from America, ruderal in Mediterranean Africa and the Sahel region [1]. It is widely distributed in West Africa especially in Nigeria, Senegal, Ghana and Cameroon [1]. It is useful as an analgesic [2] and as a vermifuge to expel round-worms and hookworms [3]. It is also useful as a purgative [1]. Toxic actions are a limitation to the potential usefulness of any agent and may even lead to death. It is for this reason, that this study is primarily designed to determine the long-term effects which small and large doses of the extract of the plant might probably have on certain major organs of the body

Phytochemical analysis of the herbal extract have been done elsewhere [2].

20 male albino rats were administered with doses of the plant extract ranging from 12.31g kg-1 to 31.89 g kg-1 to drink at will for 42 days. During the period of the study, weights of the animals were monitored weekly with their gross appearances. At the end of the 42nd day, the rats were killed by cervical dislocation. Post mortem of each of the animals were performed. The lungs, stomach, kidneys and liver were excised.

The organs from the groups given the plant drug were compared with those of the controls. The specimen from the organs were fixed in 10% formol saline for histopathological studies.

Small pieces of tissues taken at autopsy were fixed in 10% formol saline. The tissues were dehydrated through alcohol series, cleared in chloroform and finally embedded in paraffin wax (m.p. 56°c). They were sectioned on a rotatory microtome (R.Jung, Heidelberg, Germany) and dried in an oven at 12h at 56°c

Sections were deparaffinized by placing them in Xylene for 2 min, taking them through Haematoxylin for 10min and they were finally washed in tap water. Counter-staining was carried out with 1% aqueous Eosin, and the specimen were dehydrated in alcohol, cleared in Xylene before mounting.

Sections from all tissues were prepared and examined in this way, for any evidence of histopathological changes.

Slides of the excised and prepared tissue sections namely the liver, kidney, lungs and stomach were observed microscopically. The lungs showed signs of aeration and the vascular channels are congested (Fig. 1).

In the case of the stomach, the lining mucosal layer showed squamous metaplasia with keratinization (Fig. 2). The submucosal, muscular propria and the serosal layers are oedematous and congested (Fig. 2). 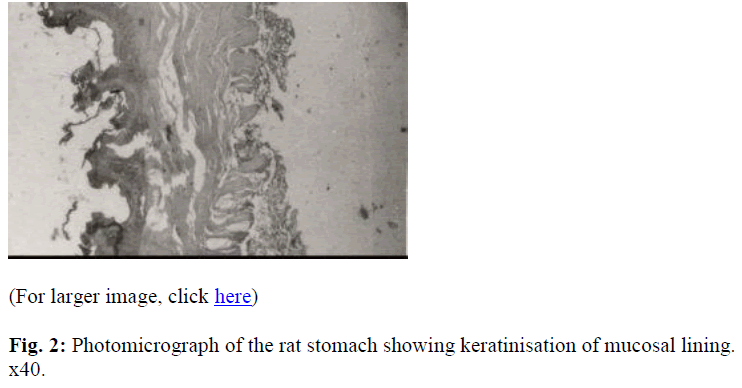 The tubules of the kidney showed coagulative necrosis and the glomeruli are destroyed and showed hyalinization (Fig. 3). The interstitium showed mild infilteration by chronic inflammatory cells and the vessels are congested (Fig. 3). In the liver, no marked changes were observed.

Fig. 3: Photomicrograph of the section of rat kidney showing necrosis of the tubules. X400.

The aqueous leaf extract, after six weeks administration showed a decrease in weight of the treated animals, whereas body weight of the untreated rose progressively as the period in-creased (Table I) 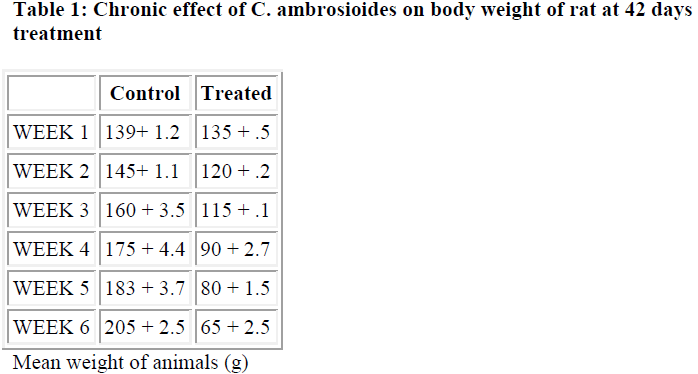 The effects produced by the medicinal plant in the body tissues when administered orally ad libitum to non-infected animals con-secutively for six weeks showed that it caused certain changes in the tissue. The chemical structure and the exact nature of the active ingredient in Chenopodium ambrosioides is not known yet, whatever the active component is, its efficacy in analgesia has been established [2]. Most of the tissues of the treated animals observed microscopically showed oedema and congestion. Other outstanding toxicological effects caused by the extract was the squamous metaplasia with keratinization which might have been caused by irritation of the muscular layer of the stomach after a long period of administration and also coagulative tubular necrosis and glomerular damage of the kidney. The loss of weight in treated animals could not have been due to the content of the animal feed, since the weight of the control animals increased progressively as the period increased. However, it must be pointed out that no analgesic is known to be taken daily for such a long period of time, in essence, they are administered for only a couple of days. Also, since the extract is not yet available in its pure form, all these toxic effects might be due to impurities contained in the plant extract. In conclusion, we have been able to show that C. ambrosioides taken in its present form over a long period of time might not be safe.