Chilaiditi`s syndrome: correct diagnosis can save the patient from unnecessary and life threatening surgery.

Chilaiditi syndrome is the interposition of the colon between the liver and the right hemidiaphragm. The incidence of this syndrome ranges from 0.025% to 0.28% and seems to increase with age. The sex ratio is 4:1, male to female. In these patients, the colon is displaced and caught between the liver and the right hemidiaphragm. Generally patients are asymptomatic but non-specific symptoms such as abdominal pain, distension, nausea, vomiting and constipation can be presented. Confusions could be avoided with proper diagnosis of this rare syndromic presentation with more serious abnormalities such as perforated viscus, pneumoperitoneum and subphrenic abscess. Recognition of Chilaiditi syndrome is important because this rare entity can be misleading to the surgeons and mistaken for more serious abnormalities, which may lead to unnecessary surgical interventions. Diagnosis is best achieved with CT imaging. Identification of Chilaiditi syndrome is clinically significant as it can lead to many significant complications such as volvulus, perforation, and bowel obstruction. If the patient is symptomatic, treatment is usually conservative. If the patient does not respond to initial conservative management, and either the obstruction fails to resolve or there is evidence of bowel ischemia, then surgical intervention is indicated

Chilaiditi syndrome is a rare condition when pain occurs due to transposition of a loop of large intestine (usually transverse colon) in between the diaphragm and the liver, visible on plain abdominal X-ray or chest X-ray. Normally this causes no symptoms, and this is called Chilaiditi'ssign [1]. This finding is a rare anomaly incidentally seen on chest or abdominal radiographs, with an incidence of 0.025 - 0.28% [2]. Abdominal pain, constipation, vomiting, respiratory distress, anorexia, volvulus, and obstruction are possible presentations of this syndrome [3]. Chilaiditi syndrome can be a self-resolving or a chronic condition [4].

No intervention is required for an asymptomatic patient with Chilaiditi sign. When evaluating a symptomatic patient with small bowel obstruction, clinicians should first rule out the more serious condition of pneumoperitoneum. On the other hand, a misdiagnosis of bowel perforation might result in unnecessary surgical intervention. It is important to identify Chilaiditi sign in order to prevent complications from occurring during a percutaneous transhepatic procedure or liver biopsy, particularly in cirrhotic patients, who are predisposed to development of Chilaiditi sign. An interposed segment of bowel can also make it very diffcult to perform a potentially dangerous complication that can lead to perforation [5]. Initial management of Chilaiditi syndrome should include bed rest, intravenous fluid therapy, bowel decompression, enemas, and laxatives. A repeat radiograph following bowel decompression may show disappearance of the air below the diaphragm. Thus, bowel decompression documented by a follow-up radiograph can confirm both the diagnosis of the condition and the success of the therapy, by showing the disappearance of sub diaphragmatic air and repositioning of distended intestine back to the normal position beneath the liver. If the patient does not respond to initial conservative management, and either the obstruction fails to resolve or there is evidence of bowel ischemia, then surgical intervention is indicated. In recent years, surgical intervention has been increasingly used in order to manage symptoms of chronic, intermittent abdominal pain [6].

We hereby present a rare case of a 73-year-old Omani male patient who was referred to us while admitted in Coronary Care Unit as a case of myocardial Infarction. Intensivists referred him to General surgery as they detected a suspicious presence of gas under the diaphragm (pneumoperitoneum). The patient presented with epigastric and right upper quadrant pain (sharp in nature) with radiation to the right shoulder. He was found to have Chilaiditi syndrome diagnosed by plain x-ray chest and abdomen and was confirmed with CT scan. He did not have shortness of breath, attacks of syncope, change in appetite, emesis, dysphagia, early satiety, fever, chills, night sweats, melena, hematochezia, or any changes in his bowel habits. No history of similar attacks in the past. He is not a diabetic or hypertensive. He had no surgeries in the past .He is a non-smoker, non-alcoholic and does not use any abusive drugs. His family history was significant for hypertension. 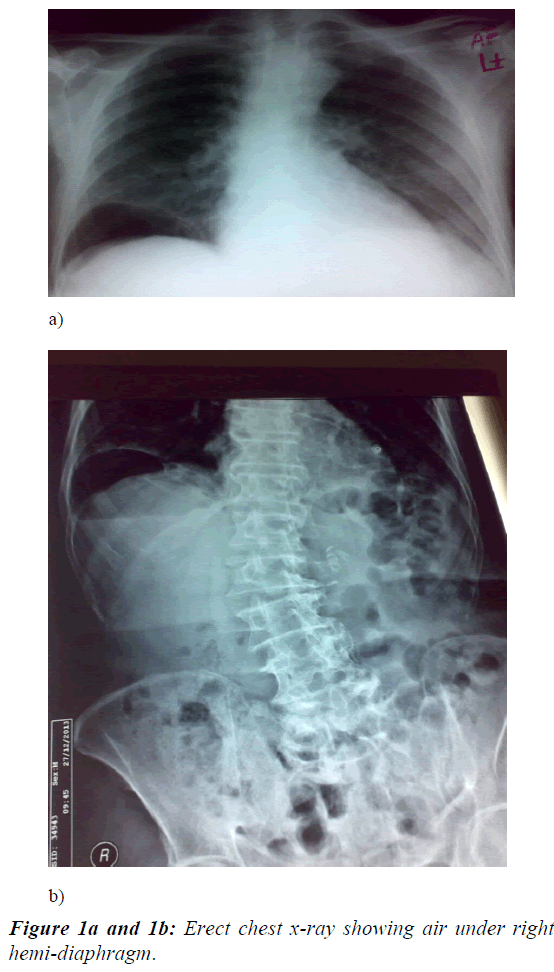 Figure 1a and 1b: Erect chest x-ray showing air under right hemi-diaphragm. 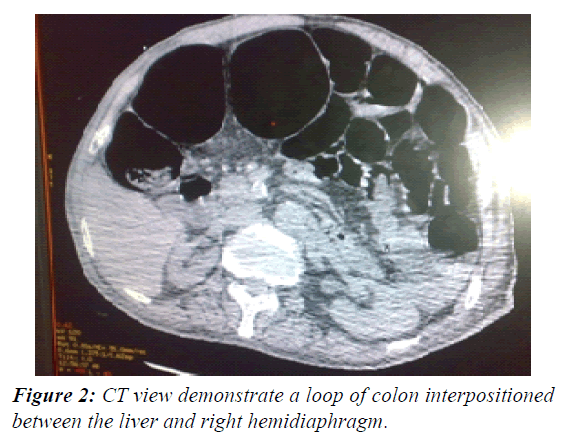 Figure 2: CT view demonstrate a loop of colon interpositioned between the liver and right hemidiaphragm.

The patient was managed conservatively, nothing per month for 6 hours with analgesics and bed rest. Patient’s symptoms resolved without surgery. He was then allowed to take regular diet gradually after 6hours, he tolerated oral feeds and was discharged later without any significant symptoms.

Hepatodiaphragmatic interposition of the intestine is known as Chilaiditi sign/syndrome [7]. It has been proposed that the term “Chilaiditi sign” be used in an asymptomatic person and “Chilaiditi syndrome” in symptomatic patients [8,9]. The cause of Chilaiditi's syndrome is not fully understood. Predisposing factors for Chilaiditi sign/syndrome are not clear, but may include increased colonic mobility, chronic constipation,lax suspensory ligaments and phrenic nerve injury [10]. Chilaiditi's syndrome can cause a variety of symptoms including abdominal pain, nausea, vomiting, and small bowel obstruction. The specific symptoms and presentation of Chilaiditi's syndrome can vary greatly from one person to another [11]. In the diagnosis of Chilaiditi sign, the first step is to rule out the possibility of pneumoperitoneum. For the diagnosis to be made by imaging, the right hemidiaphragm must be displaced superiorly to the liver by the intestines, pseudo-pneumo peritoneum caused by air in the bowels must be seen, and the superior aspect of the liver must be positioned below the level of the left hemidiaphragm. The best imaging modality for visualization is CT scan which carries an added benefit of ruling out the possibility of diaphragmatic rupture .In most instances, the hallmark of therapy is conservative and consists of bed-rest, fluid supplementation, nasogastric decompression, enemas, high-fiber diets and stool softeners [12]. If the patient does not respond to initial conservative management, and either the obstruction fails to resolve or there is evidence of bowel ischemia, then surgical intervention is indicated. In recent years, surgical intervention has been increasingly used in order to manage symptoms of chronic, intermittent abdominal pain [6]. The appropriate surgical approach depends on the nature of the interposed segment of the colon. Cecopexy may be adequate to eliminate the possibility of recurrence in an uncomplicated cecal volvulus, unless gangrene or perforation necessitates surgical resection. However, colonic resection is the best option for a volvulus of the transverse colon, and attempts at colonoscopic reduction are not recommended due to a high frequency of gangrene (16%) in this type of volvulus [13]. Laparoscopy was used in management some cases of Chilaiditi syndrome causing small bowel obstruction [14]. In one case it was complicated by megacol on progressed to heart failure casing death. Therefore, it is important to draw attention to the importance of this anomaly and its appropriate diagnosis and treatment to ensure the most favorable patient outcomes [15].

I acknowledge the assistance offered by our hospital Radiologist Dr. AliLabeeb and the late Dr. EssamKhater for their help during management of this case.

Diagnosis of Chilaiditi syndrome is extremely important because this rare syndrome can lead to not only unnecessary but also hazardous surgery if not diagnosed. This rare entity should be suspected in patients with abdominal pain, vomiting and free air under the right hemi-diaphragm in their chest x-ray, without the clinical condition of acute abdomen.