Chemical analysis of stones and its significance in urolithiasis

The search of literature showed Urolithiasis as a multifactorial recurrent disease, distributed worldwide in urban, rural , non industrial and industrial regions with different chemical composition of analyzed stones in context to various etiological and risk factors. The present study was aimed to qualitatively analyze the uroliths obtained by surgical intervention at Krishna hospital Karad, a South West region in Maharashtra (India), to evaluate the predominant constituent present in them and report its significance. The study reported, urolithiasis was more suffered by individuals between the age group of 30 to 60 years with more predominance in males than females. The chemical analysis of uroliths showed that all the assessed stones were of mixed heterogeneous type, Magnesium Ammonium Phosphate (71.2%) was predominant constituent followed by Calcium Oxalate (68.8%), Calcium Carbonate (64.0%), Urate (44.8%), Cystine (12.8%), Xanthine (2.4%) and Fibrin (1.6%). The study concludes simple qualitative laboratory based method for assessing chemical composition of various uroliths allowed a reliable diagnosis of stone contents whose data may be useful in advising the people of this region for taking preventive measures for reducing the risk of prevalence and recurrence of urolithiasis in them.

Urolithiasis, the process of forming stones in the kidney, bladder and/or urethra is a complex phenomenon yet not clearly understood, this cannot be contributed to any single factor, and may be due to metabolic disturbances, infections, hormonal influences, dietary conditions and habits, poor fluid intake which concentrates and decreases the urine volume, immobilization or lesions or obstructions in the bladder or kidney or increased excretion of stone forming components such as calcium, magnesium, oxalate, carbonate, phosphate, urate, xanthine, cystine, etc.

Renal stones, one of the most painful urologic disorders, have beset humans for centuries. Researchers have found evidence of kidney stone in 7,000 year old Egyptian mummy [1]. Each year, worldwide people make almost 3 million visits to health care providers and more than half a million patients go to emergency room with urolithiasis [2]. Epidemiological studies indicate many factors like age, sex, industrialization, socioeconomic status, diet and environment, influences urolithiasis [3]. The prevalence of renal stone formation is approximately 2-3% in the general population [4]. Alarming high incidence of urolithiasis with varied chemical composition of calculi has been reported from different regions of India [5-11]. Endemic bladder calculi are common in developing countries like Eastern Europe, South-East Asia, and India and in the Middle East, where dietary protein is derived from plant sources. Upper urinary calculi associated with urease producing bacterial infections occur in England and Europe. Kidney stones are not usually fatal although some primary conditions that produce kidney stones can lead to death from problems associated with primary disease or complications of renal failure. Infected stones may lead to urosepsis and death [12].

There was however no data on the chemical composition of renal calculi from the population of Western Maharashtra, thus the present pilot study was undertaken to qualitatively analyze the renal stones with the relationship between the sex, age group and location of uroliths in patients of urolithiasis and gather some information in this regard. A knowledge of chemical composition of renal stones may be of great importance both as a guide for the clinical management and also for better understanding of physicochemical principles underlying the formation of calculi that may help to give advice and suggestions for the people and patients to carry out preventive measures in reducing the risk of prevalence and recurrence of urolithiasis in this region respectively.

The study included one hundred and twenty five uroliths obtained by surgical intervention of Urolithiasis patients, clinically and radiographically diagnosed at Krishna Hospital and research centre Karad a South-West region of Maharashtra (India), during a period of 2006-2008.The data of Urolithiasis cases was collected with the help of structured questionnaire proforma.The stones obtained from Surgery department to clinical Biochemistry laboratory were washed with distilled water to remove the debris, dried completely and weighed. The stones were cut and crushed, the powdered form was qualitatively ana lyzed for their chemical composition adopting standard methods [13] using chemicals of Analytical reagent grade. The research project was approved and permitted by the ethical committee of institute.

Table 1: Distribution of Renal Stone in relation to patients Age and Sex.

When the uroliths were grouped according to their locations in the urinary tract, the result of analysis showed a high incidence of stones in ureter followed in the order by bladder, urethra and kidney (Table No. 2).

Table 2: Distribution of Renal Calculi in relation to their locations.

All the analyzed uroliths were of heterogenous mixed type, each was chemically different which is clearly depicted in Table No.3. 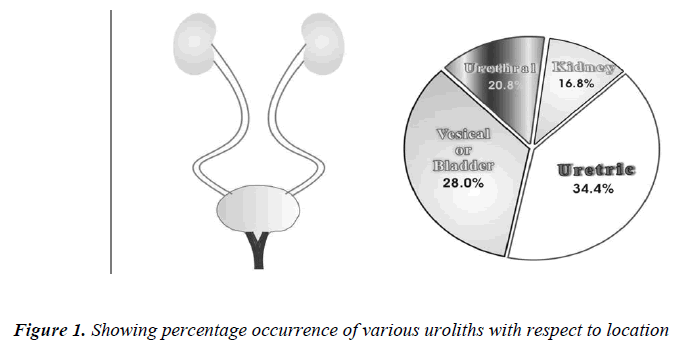 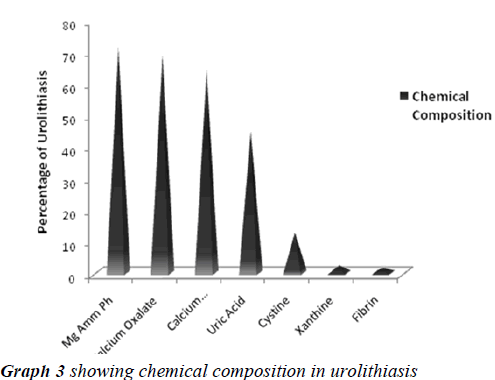 Urolithiasis is calculus formation in any part of the urinary system, occurring in both sexes. The present study reported the weights of analyzed uroliths between 10 gms and 170 gms, predominantly suffered by males, located mostly in ureter, with mixed heterogenous chemical composition. The calculi causing urinary obstructions occurred more commonly in males may be due to smaller diameter and increased length of urethra. Calculi results from the precipitation of stone constituents might be due to supersaturation in urine. The presence of mixed stones suggests a multi factorial etiology. Magnesium ammonium phosphate (71.2%) was predominant constituent which predicts the presence of bacteriuria and urinary tract infections caused by urea splitting bacteria (Proteus sp, Kledsiella sp). The calculi must be treated as infected foreign body and removed in their entirety. The presence of calcium oxalate (68.8%) and calcium carbonate (64.0%) were more next common constituent in all the analyzed stones. For calcium calculi, risk factors may vary by population. The risk factors may be hypercalciuria, hyperparathyroidism, hypocitruria, renal tubular acidosis. Hyperoxaluria can be primarily caused by excess ingestion of oxalate containing foods (rhubarb, spinach, cocoa, nuts, pepper, beet and tea) or the excess oxalate absorption due to various enteric diseases (bacterial overgrowth syndromes, chronic pancreatitis or biliary disease) or ileojejunal surgery [14]. Other risk factors may include taking high doses of vitamin C and mild hyperuricosuria [15]. Our study also reported the stones chemically composed of urate which may be due to hyper uricosuria a disorder of uric acid metabolism; Gout, excess intake of vitamin D, urinary tract infections and blockage of urinary tract. The uric acid content of body may also increase due to increased non vegetarian diet causing risk of hyperuricosuria and further formation of urate stones. Cystine, xanthine and fibrin stones were rarely found in analyzed stones that may be associated components of stones.

P.P. Singh et.al in their 196 stone analysis in Manipur showed calcium and oxalate were present in all the stones. Phosphate was present in 194 and urate was present in 146 stones [16]. Urinary stone composition in North East Thailand from 120 adults and 22 children reported , calcium oxalate was the main component of both adult (49%) and childhood (44%) stones and were usually found in the upper urinary tract. Magnesium ammonium phosphate and urate were the stones found mainly in the upper urinary tracts [17]. Urinary biochemical profile of patients with ureteric calculi in Jodhpur (North-West India) also reported predominance of calcium, magnesium and oxalates in their stone analysis study [18]. Spectrum of pediatric urolithiasis in Western India (Mumbai) reported 94.8% stones were of mixed types and only 5.2% were pure. The common constituents in their analyzed stone were calcium (98.7%), oxalate (87.0%), phosphate (84.4%) and urate (76.6%) [19].

Chemical composition of urinary calculi in Maiduguri, Nigeria showed a male preponderance with female (12:1). The calculi occurred more in the upper part of urinary tract (70.9%) than the lower part of the tract (29.1%). Calcium containing stones constituted the majority (76.9%), urate (16.3%), struvite constitutes (4.3%), xanthine (1.7%) and cystine (0.9%) [20]. Gault M H and Chafe in Canadian population found phosphate stones were on average heavier and relatively more common in women, had an earlier age peak frequency in women than oxalate stones. In contrast oxalate stones were much common of lighter weight and became more frequent with time [21]. The types of stones formed depend mainly on the composition of urine, which in turn reflects the type of diet consumed in the areas. The stone problem in the tropics was compounded by low urine volumes of poor drinking [22].

Pediatric urolithiasis in Pakistanis showed the pattern of calculus disease changed from a predominantly lower tract site in the mid 1980s to the upper tract in the mid 1990s [23]. Stone composition, urinary risk factors and dietary analysis suggest that diet, dehydration and nutritional habits and urinary tract infections are the main causative factors of stone disease. Fluid intake and epidemiology of urolithiasis suggests a sufficient intake of fluid is one of the most important preventive measures for stone formation and stone recurrence [24]. Bacteriology of urinary tract stones reported that up to half of renal stones and associated urine specimens have been positive on culture and up to 50% of such stones contain Magnesium Ammonium Phosphate [25]. Urinary tract infections caused by urease producing Gram negative organisms, mainly produced stones constituting Magnesium Ammonium Phosphate, Carbonate apatite and Mono ammonium urate, an alkaline urine is most favourable to their formation [26].

Studies in the Durban area, with its high incidence of kidney and bladder stones, indicate that Calcium Oxalate is the overwhelmingly dominant (80%) followed by urate; the occurrence of phosphate stones, especially those containing Struvite were low [27].The study from Saudi Arabia reported hypercalciuria and hyperuricosuria showed correlation with family history of stones and obesity with risk factors for urolithiasis in both genders [28]. Urolithiasis in Okinawa,Japan accounted 81.6% for calcium oxalate stones while 15.8% for urate stones[29]. Frequency of renal stones was highest in Berlin and lowest inA Moscow; lesser distribution of phosphate lithiasis in Berlin than in Kirghizia and particularly in Moscow. Prevalence of struvite stones from Moscow was linked with the vital activity of Proteus and E .coli [30].

The data of chemical composition of assessed renal stones from the cases of urolithiasis in population of Karad city and nearby areas of south west region of Maharashtra reported more predominance of Struvite infection stones, the study suggested the factors for formation of stones in this area were more followed after urinary tract infections which made urine alkaline there by precipitating the phosphates. The Calcium calculi formation may be due to altered eating and drinking habits which promoted it in these individuals. The collected information in this regard may help to look through the risk factors for calculi formation in this area which might enable the health care providers to plan preventive measures in order to reduce the high incidence of urolithiasis in this area and further advice to the suffered patients to prevent the recurrence of stone formation in them.

We acknowledge the vice chancellor of Krishna Institute of Medical Sciences University, Karad for providing the financial support to carry out this research work in the Department of Biochemistry in collaboration with Surgery Department. We thank the doctors and technical staff of K.I.M.S Surgery Department for their guidance and support throughout the research period.