Chronic Kidney Disease is characterized by a slow and gradual impairment of the kidney function. CKD leads to the decrease of secretory, synthetic and endocrine functions. These changes are associated to nitrogen and phosphorus retention as well as to a decrease of plasma calcium. Hypokalemia is associated to the activation of the parathormone, which primarily tends to normalize the calcium and phosphorus levels; however, it is known that in the long term it contributes to the worsening of symptoms in a patient with CKD. The incidence of end-stage kidney disease is increasing proportionally to that of Type 2 Diabetes Mellitus [1-4] and it has been associated to an increase of complications mainly cardiovascular [5-9]. The vascular alterations in these patients occur in the intramyocardial arterioles [10] in the elastic arteries such as the aorta and peripheral arteries like the mesenteric [11] and may be altered in their structure and/or function. The structural changes reported in the aorta such as thickening of the aorta, increase in the number of the vascular smooth muscle cells per length unit (1 mm), increase in the cellular nuclear volume and extracellular matrix [12] and calcification of arteries due to an active process of the vascular smooth muscle osteoblastic function with an increase of the parathyroid hormone and phosphate [13], which is associated with a high incidence of hypertension [6,7,14,15]. In experimental uremia, the isolated heart presents a fast inactivation of the calcium flows in the ventricular myocytes, which may lead to the shortening of the action potential [16], which may be associated to a significant increase of the baseline calcium in the cardiac myocyte [17]. On the other hand, it has been observed that once all the calcium deposits in the smooth muscle of the rat aorta have been emptied. The intracellular calcium levels can be rapidly recovered while incubating the aorta in a calcium content solution and such calcium recovery does not rely on an ongoing receptor activation. However, there is an increase in the baseline tone due to the contractile protein activation which is not affected when treated with ryanodine, thapsigargin and cyclopyazonic acid, representing an entry pathway of calcium that depends of the depletion of compartments of Ca2+ sensitive to noradrenaline [18]. The studies conducted in human omental arteries in which norepinephrine and U-46619 were administered, demonstrated an increase of ((Ca2+)i) of intracellular calcium, this effect seems to be independent to the activation of non-dependent calcium intracellular pathways or to the increase of the Ca2+ sensitiveness of myofilaments. It has been demonstrated that in a free calcium medium, the addition of CaCl2 with presence of agonists that stimulate the movement of intracellular calcium, produces increases in ((Ca2+)i) and the contraction that may be inhibited by nitrendipin but not by PKC. Therefore, this suggests that in those vessels the contraction caused by norepinephrine is composed of a calcium release from the ryanodine sensitive intracellular deposits, calcium entry through nitrendipine sensitive channels and independent Ca2+ y/o Ca2 sensitization pathways [19]. However, studies have not been conducted in patients with chronic kidney disease where the calcium homeostasis is significantly altered that is why that the purpose of our work is to look for the presence of calcifications in vessels of the human omental, and the contractile response to calcium in a High K medium, and the capacitative entry of calcium as opposed to vessels from patients with or without chronic kidney disease and the latter whether it is associated or not to type 2 diabetes mellitus.

The project was approved by the Ethics Committee of the Mexican Social Security, National Medical Center Hospital La Raza (09-B5-61-2800/1940). Two groups were made for the study, Group A: patients with diagnosis of end-stage chronic kidney disease of any etiology, females or males, eligible for placement or replacement of Thenchkoff Catheter with omentectomy and patient written consent; and Group B: Controls: patients with glomerular filtration index calculated>60 ml/min, females or males. Adults less than 50 years old determined by body mass index<27, hip-waist index<0.8, abdomen circumference<85 cm. 20 scheduled for elective open surgery due to non-infectious disease nor neoplasic and total or partial omental resection, with nonidentified comorbidity and patient written consent.

Arterial and mounting preparation from the omentum sample that was sent for a histopathological study, a sample was taken containing a 2nd generation glass (~400-800 μm of diameter), which was immediately put into a cold Kreps-bicarbonate solution with the following composition (mM): NaCl 118, KCl 4.7, KH2PO4 1.2, MgSO4 1.2, CaCl2 2.5, NaHCO3 25, dextrose 11.7 and EDCA calcium disodium 0.026. Then the fat and connective tissue were removed from the arteries and cut in rings of 4 to 5 mm of diameter and hung between two Lshaped wire hooks inside a 10 ml isolated organ chamber. The distal portions of hooks were coupled to the bottom of the chamber and to a displacement force transducer (FTOC3C, Grass Instrument, Quincy, MA). After performing the curve to obtain the optimal tension, the omental rings were set at a baseline tension of 1.5 g, put in a Krebs-bicarbonate solution and gases with 95% O2, 5% CO2, at a constant pH of 7.4 ± 0.1, and maintained at 37°C ± 0.1°C for two hours. The contraction was isometrically measured and recorded on a Grass polygraph (Model 7D Grass instrument). The rings were first tested with phenylephrine (Sigma, St Louis MO) 1 × 10-5 M in the chamber, then rinsed and placed in the solutions required for the experiments. The rings were mounted with intact endothelium known for its relaxing response to acetylcholine 1 × 10-5 M.

Measurement of (Ca2+)i. The cells in a culture of vascular smooth muscle of first or second step rats were exposed to serum of screened patients during 24 h and the changes in (Ca2+)i were determined by fluorescence measures of fura 2 trapped with a fluorometer (Fluorolong II, SPEX, Edison, NJ). The vessels segments were loaded with fura 2 by incubation with Krebs solution containing 5 μM fura 2-AM y 20% pluronic acid in the dark for 2 h. In order to measure the changes in the calcium concentration, the vessels were stimulated with phenylephrine 1 × 10-5. The fluorescence radius (measured at 510 nm) obtained from the two excitation wavelengths (340/380 nm) were calculated after the auto fluorescence is auto subtracted at 340 and 380 nm.

At the end of the experiment, the arteries were set in alcohol 96% after performing 5 microns cross sectional cuts taking 4 levels in each cut were dyed with hematoxylin, eosin, Masson Tricomic and dye for Velhoett elastic fibers. Placed on wax, then cut and dewaxed and hydrated with distilled water, changed to alcohol 96%, then a fuchsin aldehyde solution was applied for 50 minutes, the excess of dye was removed with alcohol 96%, rinsed with water and contrasted with Van Gleson solution or methanyl yellow, hydrated with alcohol 96%, cleared with xylol and mounted on synthetic resin. In order to obtain the Masson trichromic, 5 microns wax cuts were dewaxed, hydrated in bidistilled water, fixated in bouin solution during 1 h, rinsed with the solution until yellow color disappears. In order to dye the nuclei with Weigert haemotoxycilin during 5 minutes were rinsed with water and Biebrich Scarlet Fuchsin acid solution during 2 minutes, distilled water baths and cleared with acetic acid during 3 minutes, dehydrated with alcohol 96%, cleared with xylol and mounted with resin. After being photographed with an optic microscope Nikon E-600 and analyzed with Image J system.

A Student t Test is performed in order to compare both groups with continuous quantitative characteristics that comply with normality and homoscedasticity Chi square for qualitative ones The vascular reactivity in both groups at different drugs concentrations used, was analyzed through ANOVA. A Response-Dose Response was performed. The Sigma Plot and Sigma STAT package were used in this analysis. The statistical significance was considered as significant with a p<0.05.

The trial recruited 8 patients with chronic kidney disease with diabetes mellitus (CKD-DM), 8 patients with chronic kidney disease without diabetes (CKD) and 15 controls without diabetes and CKD. The age of patients was significantly different between groups of CKD (34.6 ± 5.2 vs. 57.6 ± 4 years old) secondary o not to diabetes (DM) respectively, but the age of the control group was similar in each group of CKD (p=NS). As expected, the serum glucose was higher in the CKD-DM group and creatinine was lower in the control patients group (Table 1). Calcium response concentration curves were performed from 0.01 M to 10 mM, 3 prior consecutive baths with calcium - free Krebs, with K+ 40 mM and stabilized during 60 minutes. The calcium curve showed a left displacement in patients with CKD and CKD-DM requiring a higher concentration to achieve 50% of the maximum effect EC50 (1 × 10-3 y 1 × 10-3.6) compared to controls (1 × 10-3.9) (Figure 1). 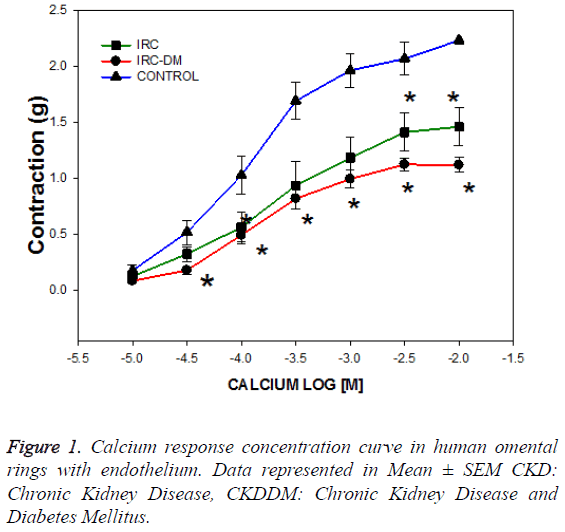 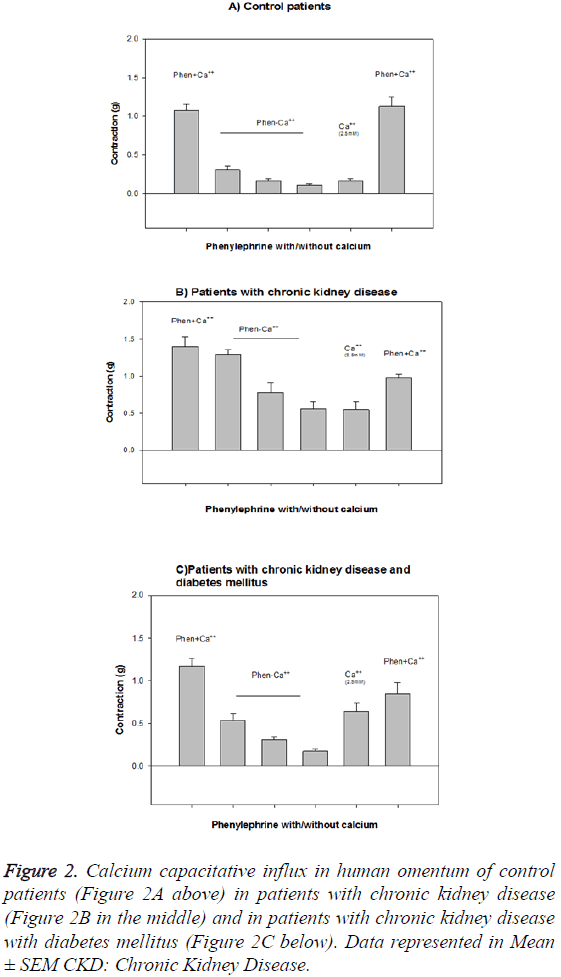 Chronic Kidney Disease (CKD) is a condition associated to hypertension and diabetes mellitus. In CKD, an endothelial dysfunction exists that leads to an increase in the vasoconstriction; however, there are no sufficient trials to assess the morphofunctional changes and the role of calcium in this condition is one of the main purposes of this trial. The vascular dysfunctions observed in this trial are the thickening of the omental artery, the increase of the number of vascular smooth muscle cells and the increase of nuclear-cellular volume [10-12]. These results match with what is reported in arteries of patients with disorders in the parathormone release, therefore leading to an increase in nitrogen and phosphate levels, as well as a reduction in calcium, aspect that we consider as important because patients with CKD show a high incidence of high blood pressure associated to secondary hyperthyroidism [6,7,14].

It is important to highlight that when there are conditions that modify the calcium intra and extracellular movement result in morphofunctional changes at a cardiovascular level, which may be associated to a significant increase of the baseline calcium [16,17] resulting in an increase in the contractile response. The results obtained in this trial show that the intracellular calcium deposits both in CKD and CKDDM2 are altered, resulting in a modification of the calcium capacitative influx. So that after the intracellular calcium deposits are emptied during the contractile mechanisms, these cannot be recovered in the same way as it happens in the contractile response of arteries of healthy patients. This suggests that the alteration in the calcium movements between the intra and extracellular spaces, leads to an increase in the vascular tone, associated to an increase in blood pressure [18-21]. Calcium entry into the vascular smooth muscle cells is regulated by the calcium-sensing receptor (CaSR), which is highly sensitive to small changes in extracellular calcium levels [22]. This is important because the CaSR is down-regulated with high levels of extracelullar calcium like in the advanced chronic kidney disease, and this inhibition of CaSR function increases vascular smooth muscle cells calcification [23,24].

Pathologies that modify the intra and extracellular calcium movement at a cardiovascular level like happened in the advanced chronic kidney disease, increase the contractile response that could be responsible for the increment of blood pressure and cardiovascular changes.

This paper was prepared thanks to the support of Escuela Superior de Medicina, IPN.