Characterization of foot shape and deformity in Saudi population: A preliminary study

Application of gait biomechanics are numerous and versatile. One of these applications is to study the shape and deformity of feet. Such studies aid in the establishment of standards for foot-wear manufacturers. Thus, this is a preliminary study to create a classification of Saudi population as a first step towards setting a Saudi standard for foot wear. In this study 2 groups; male and female; consisting of 50 each were used. Bare-foot plantar pressure measurements were performed 5 times for each foot using Novel Emed-m platform. Foot index and hallux angle were obtained from these measurements and used to classify the foot shape and deformity, respectively. Results show that the majority of the population tested herein has standard and normal feet; with standard average of 77% for female and 80 for male and normal average of 88% for both male and female.

In the 18th century the deformity of hallux valgus was first mentioned in the literature. During the 19th century, its occurrence and etiology were discussed many times. During the 19th and 20th century several researchers noted that hallux valgus was seen in those who wear shoes and rarely noted in those who do not wear footwear or wear sandals [1-3]. Thus, the hallux valgus has been reported to be the hallmark of the foot deformity. Its occurrence in the United States has been estimated to be one-sixth of the population [4]. It was also noted that it occurs at least twice as often in women as in men. It can be concluded from the fact that the deformity occurs mostly in shoe-wearing population and it occurs in women who wears pointed-toed and high heeled-shoes; thus hallux valgus deformity is related to miss-fitted shoes [5,6].

In forensic investigations, one vital element is the identification of deceased, a procedure mostly performed via a biological profile developed through the application of population specific standards or characteristics [7]. Such standards are usually set directly or indirectly from feet anthropometric data for shoe and non-shoe-wearing subjects of a specific population or community. Various studies were conducted aiming to explore the usefulness of anthropometric foot the dimensions in forensic investigations. The Foot Index (FI), also known as the coefficient of spreading, characterizes the foot shape, is derived from such anthropometric values as being the ration in percent of the foot breadth to the foot length [8,9]. This factor has been suggested to be used in many studies for the determination of the gender, stature, age and ultimately the identity of a deceased individual in forensic investigations [7,9-11].

The health of the foot depends to a great extent on the design of the shoes being worn which in turn depends on the shape of human feet. This shape changes tremendously due to environment, health condition, habits, age, and gender. Therefore, it is important in designing shoes to consider the actual shape of a population. That is, shoes designed in Europe may not fit those in the Middle East and vice versa. Similarly, shoes designed for male cannot be simply miniaturized to be used for females or children. Finally, and more importantly, shoes designed for young people cannot be used for elderly people.

The purpose of this preliminary study is to collect and use anthropometric data from Saudi males’ and females’ feet to characterize the feet shape and produce a proper classification for such a population.

Subject bare-foot plantar pressure measurements were performed several times for each foot using Novel Emed-m platform (Munich, Germany). 5 dynamic plantar measurements were retained and averaged by means of a special software (Novel Project software) adjoined to the data acquisition hardware. The anthropometric dimensions such as the foot length, forefoot width and hallux angle were extracted and the Foot Index (FI) calculated as:

The mean FI for each group was computed. The subject's foot shape was classified into three categories; slender, standard and broad by comparing the subject's FI to the corresponding mean FI as follows:

3. The foot is considered Standard otherwise.

As referenced by previous studies, the range of normal values for hallux angle is between 0° and 30° [12,13]. Although no absolute value can be established to define the boundary between normal and deformed, it has generally become accepted that if the hallux angle becomes more than 15° the patient may be considered to have some degree of foot abnormality.

From the hallux angle data, the metatarsus-phalanx angle (MPA^) is determined according to the following relationship:

According to the MPA the foot type was classified into 2 types as follows:

1. The foot is considered deformed if its MPA<165º

As can be seen in Table 1 and Figure 1, both males and females show high prevalence of standard feet, constituting 74% or more of the population. The figure also shows left feet being more of standard type than right feet (78% compared to 76% for females and 86% versus 74% for males). 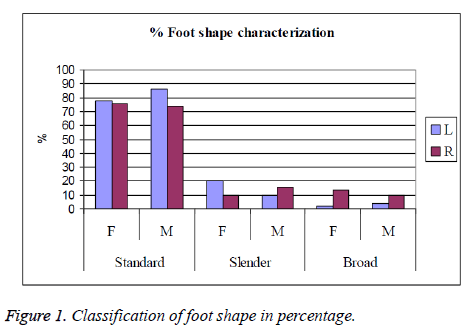 Table 2: Percentage of normal and deformed feet in recruited subjects. 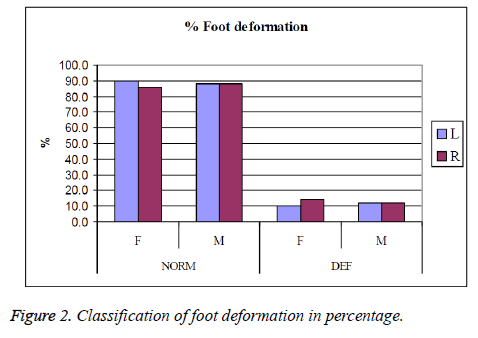 Although there was no significant difference between right and left female 90% of left female feet were normal compared to 86% for female right feet. However, in the male population both left and right feet show equal normal percentage (88% for both)

Looking at both figures, it can be seen that 74% or more of both male and female population having standard normal feet. It can, also, be seen that there is no deformed foot with the slender type feet in both males and females. In case of broad feet, data shows that for both female and the percentage of broad feet is higher in right foot compared to left foot (14% vs. 2% for females and 10 vs. 4% for male). It also shows that the average foot deformity percentage is almost the same in both males and females (12%) in contrast with previous results Buka et al. in which the deformity was greater in female than in male [5,6]. Such finding may be attributed to the difference in the footwear type usually worn by Saudi females compared to their female group.

A similar study was done by Jung et al. on Korean population. In this study the results were not presented separately for left and right feet [12]. In addition, the results were presented in terms of percentage of the whole population rather than for male and female. To compare our results to theirs the percentage of their results were adjusted for female and male separately. In addition, the average of our left and right feet was computed. Comparing the results, it was found that foot deformity in male Korean population is higher than those in Saudis (16.5% paired to 12%, respectively). The foot deformity in the Korean female population was found to be much higher than those in their Saudi counterpart (32% vs. 12%). This may be attributed in female to the effect of wearing pointed-toed and high heeled-shoes in Korean population more than Saudi females. It may also be attributed to the vigorous work and athletic activity of Korean female population.

The aim of this study is to classify the Saudi population in terms of foot shape and foot deformity using anthropometric data. Within the limit of this study the following may concluded:

1. A significant percentage of male and female Saudi population can be classified to have standard feet (>73%).

3. In both male and female population more than 85% can be classified to have normal feet.

4. Deformation of Saudi population feet is less than their Korean one which may be attributed to the different working habits and style of life.

5. This study needs to be expanded to cover larger sample size to be able to set shoe standards for Saudi population.