We aim to assess the demographic, clinical manifestation and management of insect-stung patients. About 783 (46% male; 95% expatriate workers) records of Al-Ain hospital patients were analyzed. According to Muller classification, class I severity was common in the youngest age group. Majority (56.9%) of the subjects had class III severity. Multi-variate analysis confirmed that significantly less severe cases were present in the youngest age group (0-10 years) only (P less than 0.0005) and in male patients (P less than 0.0005). Anti-histamine and corticosteroids, but not epinephrine, were commonly administered. Where data was available (32.6%), the site of the sting was mostly on legs (16.6%). Insect stings were incompletely reported, often with severe symptoms (class III), and under-treated. The severity of allergic reactions was associated with older age and female gender. Emphasis on training of healthcare providers could potentially improve the current level of diagnosis and management.

Allergic reactions resulting from insect stings, predominantly hymenoptera, are one of the most common causes of anaphylaxis worldwide [1,2]. In the United Arab Emirates (UAE), limited information is available with regard to patient characteristics, risk factors, and current management guiltiness.

In general, the causes of allergic reactions include insect stings, food allergens, and other environmental risk factors. Moreover, the severity of allergic reactions is often related to older age, gender and ethnicity. Although allergic reactions may vary in magnitude, the consequences of under-diagnosed and under-treated allergic reactions may lead to life-threatening anaphylaxis [3]. Thus, appropriate prevention strategies, diagnosis, and often aggressive treatment approaches are necessary. Currently, the treatment of choice in the emergency unit includes parenteral epinephrine, cardiovascular stabilization, systemic antihistamines and corticosteroids as well as inhaled agonist.

In the UAE, among other factors, intensive plantation projects, over the past two decades or so, have helped increase the number of insects in wild areas as well as recreational areas. This has led to an increase in incidence of morbidity from insect stings and subsequent allergic reactions. In this study, we aim to investigate the demographic characteristics, clinical manifestation, and management of allergy reactions due to common insect stings among emergency department patients in Al-Ain hospital, UAE.

In this retrospective observational study, we analyzed a total of 783 records of insect stung patients who visited the emergency department (ED) of Al-Ain hospital, in the period between February 1993 to September 1995. Demographic data, clinical manifestation and treatment regimens were collected and analyzed.

We assessed the independent relationship of age (5 categories) and sex with severity (0=class 1-2; 1=class 3-4) by means of logistic regression. A P-value < 0.05 will be considered statistically significant.

Table 1 shows the demographic data of the patients. The overwhelming majority of patients were none UAE nationals (95%) of heterogeneous expatriate workers, 46% of subjects were male. More than 50% of all subjects were children and young adults.

Table 1: The demographic variables of patients

Cross tabulation of age and severity of reaction, according to Muller classification, are shown in Table 2. Unlike class I severity found in the youngest age group, majority of the population (56.9%) suffered from allergic reaction of class III severity. Multivariate Logistic regression analysis confirmed that significantly less severe cases were present in the youngest age group (0-10 years) only (P less than 0.0005) and in male patients (less than 0.0005).

Table 2: Cross tabulation of age and the severity of allergy symptoms according to Muller Classification

With regard to treatment, anti-histamine and corticosteroids, but not epinephrine, were administered to most of the patients and regardless of severity (Table 3). 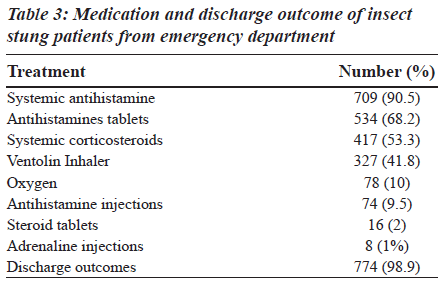 The overwhelming majority of cases seen at the emergency department was young people and may possibly represent the general population. Consistent with the literature, allergic reactions due to insect stings are seemingly more severe among adults as compared to children and among males as compared to females in this population [6-8]. The less severe findings among children may indicate appropriate parental awareness to early treatment even with mild symptoms. Occupational exposure, particularly among adult males, could not be explained by the current data. Contrary to current practice, epinephrine was not commonly used as a favorable first line emergency treatment for allergic reactions possibly due to under diagnosis. However, cardiovascular stabilization, systemic antihistamines and corticosteroids as well as inhaled volterin seem to have been adequately administered on regular basis.

A study reported in the United States[6-8] showed that although guidelines suggest specific approaches for the emergency management of insect sting allergy, concordance with these guidelines appears low in patients with a severe insect sting reaction.

Insect-stung patients who visited the emergency unit of Al-Ain hospital were, mostly, incompletely reported, often with severe symptoms (class III), and under treated. The severity of the allergic reactions was associated with older age and male gender. Emphasis on training of healthcare providers could potentially improve the current level of diagnosis and management.

The authors would like to thank the staff of Al-Ain Hospital emergency unit for their generous help during the collection of this data.