Methods: TIA patients with complete data in Tianjin Teda Hospital were retrospectively analyzed from December 2011 to November 2015 and 336 patients were taken up, which were divided into T2D group (152 cases) and control group (184 cases). By use of C type arm angiography system, cerebral vascular stenotic degrees, determination of intracranial or extracranial artery, and the collateral compensative capacity were compared between two groups.

Results: Cerebral vessel stenotic degree was significantly different between T2D group and the control group (χ2=20.03, P<0.05). Patients with moderate to severe stenosis and occlusion were more in T2D group than those in the control group (χ2=18.94, P<0.05). Control group was mainly with non-diffuse vascular lesions and compensatory form collateral vessels. In 3 subgroup, with the increase of glycosylated hemoglobin (unsatisfactory blood glucose control), the incidence rate of moderate and severe stenosis was increasing significantly (P<0.05).

Conclusion: Severe cerebral vascular stenosis is more easy to happen in patients of TIA accomplicated with T2D, which was distinguished by multiple vascular lesions, diffuse vascular lesions and less collateral compensative capacity. Unsatisfactory blood glucose control was a bad factor for these patients.

Transient ischemic attack (TIA) was originally defined clinically by the temporary nature with less than 24 h of the associated neurologic symptoms, which is one of the common ischemic cerebro vascular disease [1]. In 2009, American Heart Association (AHA) and American Stroke Association (ASA) gave a new definition of TIA which was published in the Stroke “TIA is a transient episode of neurologic dysfunction caused by ischemia (loss of blood flow)-either focal brain, spinal cord, or retinal-without acute infarction (tissue death)” [2]. Previous studies have indicated that TIA patients had different degree of intracranial or extracranial artery stenosis, and the occurrence, development and turnover of TIA were related to the degree and nature of the arterial stenosis [3,4]. Epidemiological data showed that diabetes mellitus (DM) is one of the independent risk factor for stroke [5]. Especially patient with type 2 diabetes (T2D), the risk of stroke is 1.5-3 times higher than that of the healthy human [6], which the main cause was cerebral infarction [7]. In addition, DM is also one of the important risk factors for intracranial artery atherosclerosis [8,9]. Intracranial and extracranial joint lesions were more in patients of TIA accomplicated with T2D [10].

Digital Subtraction Angiography (DSA) was set as the gold standard by imaging for evaluating the cerebral artery stenosis and occlusion [11,12]. It can not only determine the location and degree of stenosis, judge the nature of the plaque, but also can dynamically observe the blood flow, perfusion and the collateral compensative capacity [13,14]. By a retrospective designed method, we analyzed the aortocranial angiography from patients of TIA accomplicated with T2D who were detected by DSA, in order to realize the influence of T2D on cerebral artery blood vessel and provide scientific basis for secondary prevention of patients with TIA and T2D.

TIA patients with complete data in Tianjin Teda Hospital were retrospectively analyzed from December 2011 to November 2015 and 336 patients were taken up in this research. Before the surgery, comprehensive physical examination and systematic examination of the nervous system were done on patients.

Patients with TIA were divided into T2D group (152 cases) and the control group (184 cases). T2D was diagnosed with 1999 WHO criteria (FPG ≥ 7.0 mmol/L and or 2 h PG ≥ 11.1 mmol/L) [15]. Blood of the patients was collected at the next morning after admission and was set to detect the glycosylated hemoglobin. Patients in T2D group were divided into 3 subgroups according to glycosylated haemoglobin ≤ 6.5% (T2D-1), 6.5%-7.5% (T2D-2), and ≥ 7.5% (T2D-3). The gentle, age, outbreak of TIA and hypertension in T2D and the control group showed no difference (P>0.05), whereas dysregulation of lipid metabolism was high in T2D group (P<0.05) (table 1). After the surgery, body temperature, pulse, respiration and blood pressure were monitored, and the consciousness, pupil and nervous system signs were observed. The patients can eat food after 6 h, lie in bed for 24 h, and puncture side of the lower limb should brake for 24 h. The study and treatment methods were approved by the Institutional Ethics Committee of our hospital.

Table 1. The general data of the patients.

The evaluation of extracranial arterial stenosis was done according to the North American Symptomatic Carotid Endarterectomy Trial (NASCET) [16]. The degree=[(stenosis distal artery diameter-narrowest diameter)/stenosis distal artery diameter] × 100%. The degree of intracranial arterial stenosis was evaluated by Warfarin-Aspirin Symptomatic Intracranial Disease (WASID). The degree=(1-narrowest diameter/diameter of the normal blood vessel of the same artery) × 100%. The degree of vascular stenosis was divided into normal (0%-29%, Figure 1A), mild (30%-49%, Figure 1B), moderate (50%-69%, Figure 1C), severe (70%-99%, Figure 1D), and occlusion (100%, Figure 1E) [17]. When the damage happened on more than 2 vessels, it was definited as multiple vessel lesions. Diffuse vascular lesions include: 1) the length ≥ 20 mm (Figure 2A); 2) 1 vessel with multiple lesions (Figure 2B); and 3) the whole or most blood vessels were thin, stiff or obvious tortuous, in a loose shot like spring (Figure 2C), which was set as severe stenosis. The judgment of display situation and stenosis degree in all blood vessels was completed by 2 experienced neuro-interventional physicians. 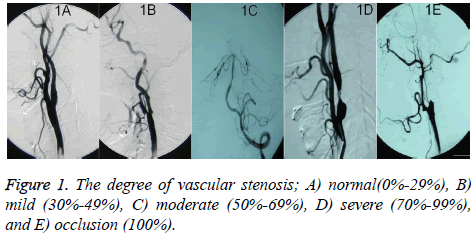 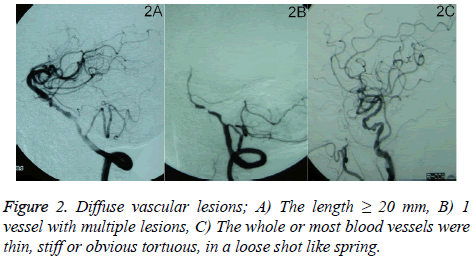 Figure 2: Diffuse vascular lesions; A) The length ≥ 20 mm, B) 1 vessel with multiple lesions, C) The whole or most blood vessels were thin, stiff or obvious tortuous, in a loose shot like spring.

All data were analyzed using SPSS software (SPSS 21.0 version package, USA). The data were expressed as ͞x ± s and further analyzed by t test and χ2 test. P<0.05 was considered as statistically significant.

Cerebral vessel stenotic degree was significantly different between the T2D group and the control group (χ2=20.03, P<0.05). Patients with moderate to severe stenosis and occlusion were more in T2D group than those in the control group (χ2=18.94, P<0.05) (Table 2). There were significant differences in the scope of lesion, diffuse vascular lesions and collateral compensative capacity between two groups (P<0.05, Table 3). Although multiple vessel lesions were the main lesions, the incidence rate was higher obviously in T2D group (71.83% vs. 53.46%) with diffuse stenoses (64.79%) and no compensatory form collateral vessels (71.13%). Control group was mainly with non-diffuse vascular lesions and compensatory form collateral vessels.

Table 3. The scope and degree of vascular lesion case (%).

When cerebral artery appears severe stenosis or occlusion, two levels of compensation will be provided like primary and secondary pathways. Primary pathway is circulus arteriosus cerebri (Willis) including carotid artery, anterior cerebral artery, posterior cerebral artery, anterior communicating artery and posterior communicating artery. And secondary pathway is consisted by leptomeningeal anastomosis, posterior pericallosal artery, brain compensatory compensation and so on. In general, the primary pathway plays a compensatory role in the early stage of ischemia, and the secondary pathway begins to compensate when the primary pathway is not developed or cannot provide and maintain normal blood flow. At this time, the regulation ability and perfusion of cerebral blood vessels were damaged. When the artery is narrow, the collateral circulation is insufficient, resulting in ischemic symptoms (such as TIA). Collateral circulation failure will lead to cerebral infarction [27]. High blood glucose make vascular structural protein and collagen protein appear non-enzymatic glycosylation, leading to the proliferation of endothelial cells in small arteries and capillaries, thickening of intima and basement membrane, causing serious intracranial arteriosclerosis and high blood viscosity. As a result, the rate of blood flow slowed down, affecting the establishment of collateral circulation.

All data and experiments were done by my team. Here we thank professor Zaiyu Guo for energetic support and help in the process of clinical work. I really very much appreciate your years of guidance and help.