The study was to investigate the changes in matrix metalloproteinase-9 (MMP-9) and tissue inhibitors of metalloproteinase-1 (TIMP-1) in acute myocardial infarction (AMI) patients after percutaneous coronary intervention (PCI) and to explore their correlation to recent left ventricular remodeling (LVRM) and cardiac function. A total of 98 AMI patients were recruited of whom 51were admitted within 12 h and treated with PCI immediately (Group A), 22 were admitted at 12 h after AMI and treated with delayed PCI when the disease condition was stable(Group B), and the remaining 25 received conservative therapy(Group C). In Group D, 20 healthy subjects were enrolled. Two-dimensional echocardiography was performed to detect the end diastolic volume (EDV), end systolic volume (ESV), left ventricular ejection fraction (LVEF), left ventricular end diastolic diameter (LVDd) and ventricular aneurysm. In Group A, MMP-9 significantly increased after PCI, but returned to nearly normal level at 7 days after AMI. The MMP-9 level in Group A was markedly different from that in Groups B and C (P<0.05). At 90 days after AMI, examination revealed the EDV, ESV, LVDd and LVEF in Groups A and B were superior to those in Group C (P<0.05). The MMP-9 on day 7 was positively related to the EDV (r=0.261, P<0.05) and ESV(r=0.340, P<0.05) but negatively to LVEF (r=-0.218, P<0.05) on day 90. So we concluded that expression increases at early stage of AMI. During the LVRM, MMP-9 is positively associated with EDV and ESV but negatively with LVEF.

After acute myocardial infarction (AMI), compensation process is initiated and left ventricular remodeling (LVRM) is also activated which is characterized by thinning and elongation of infarct ventricular wall resulting in protrusion of infarct ventricular wall. However, the non-infarct ventricular wall thickens and elongates as a response. Both processes lead to progressive dilation and transformation of left ventricle accompanied by compromised cardiac function. During the LVRM, apart from the abnormalities in structure, metabolism and function of myocardial cells, the production and deposition of extracellular matrix (ECM) are also aberrant. In the presence of hydrolysis by matrix metalloproteinases (MMPs), the production and degradation of ECM remain at a balanced level. Tissue inhibitors of metalloproteinases (TIMPs) are endogenous specific inhibitors of MMPs [1-3]. Coronary artery recanalization and myocardial reperfusion therapy such as thrombolysis and percutaneous coronary intervention (PCI) may savage the ischemic myocardium, reduce infarct area and protect left cardiac function if this treatment can be applied soon after AMI. In the present study, the effects of emergency PCI, delayed PCI and conservative therapy on LVRM and cardiac function was compared in the AMI patients. This study aimed to explore the biological mechanisms underlying the prevention of LVRM by PCI, which was further elucidated at the level of MMPs and their inhibitors. In our study, the changes in MMP-9 and TIMP-1 were investigated in AMI patients and their relations to LVRM and cardiac function were also evaluated. Our findings suggest that MMP-9 and TIMP-1 play important role in the prediction of post-AMI LVRM and cardiac function.

A total of 98 patients with initial AMI were recruited from the Department of Cardiology in our hospital from March 2010 to November 2010. There were 70 males(71.4%) and 28 females (28.6%). Of these patients, 51 were admitted within 12 h after AMI and emergency PCI was administered (Group A); 22 were admitted at 12 h after AMI and delayed PCI was performed (Group B); 25 patients received conservative therapy (Group C). In the same period, 20 subjects without evident stenosis of coronary artery on coronary angiography served as controls (Group D). There were no marked differences in gender, age, concomitant diseases (diabetes, hypertension, hyperlipidemia) and risk factors of AMI (smoking) among groups. Inclusion criteria included 2 of 3 items: patients had typical chest pain; electrocardiography (ECG) showed elevation of ST segment was ≥ 0.2 mv (millivolt) in chest lead and ≥ 0.1 mv in limb lead; creatine kinase isoenzyme was two folds higher than that of upper limit of normal. Exclusion criteria: AMI patients had old myocardial infarction, underwent thrombolysis, had connective tissue diseases, secondary myocardial rupture/ perforation or chordal rupture and severe valvular diseases, received invasive cardio- pulmonary resuscitation, had severe liver and kidney dysfunction, active hemorrhage, contrast agent allergy, trauma and malignancies and underwent major surgery. Patients who had infective of inflammatory state or scurvy who could not recall the time of sustained chest pain were also excluded. Criteria for success PCI: thrombolysis in myocardial infarction (TIMI) III flow was present in the coronary artery, the diameter of stenotic artery was reduced by ≤20%, patients had no operation related complications (such as death) and a second AMI was not noted.

In Group A, patients were administered with oral aspirin (300 mg) and oral clopidogrel (600 mg) immediately after admission and PCI was subsequently performed for the recanalization of stenotic arteries (Innova 2000 cardiovascular imaging machine). In Group B, patients received delayed PCI. Patients in Group C underwent conservative pharmacotherapy. For each patient, medical history was reviewed, physical examination performed and measurement of myocardium specific enzymes as well as ECG was also done. Patients also received intensive pharmacotherapy once they had no contradictions: aspirin, clopidogrel, nitrates, angiotensin-converting enzyme inhibitors, angiotensin receptor inhibitors, β receptor blockers, Statins, etc. Following PCI, patients were treated with aspirin at 300 mg/d and thereafter 100 mg/d 3 months later and with clopidogrel at 75 mg/d for at least 1 year. 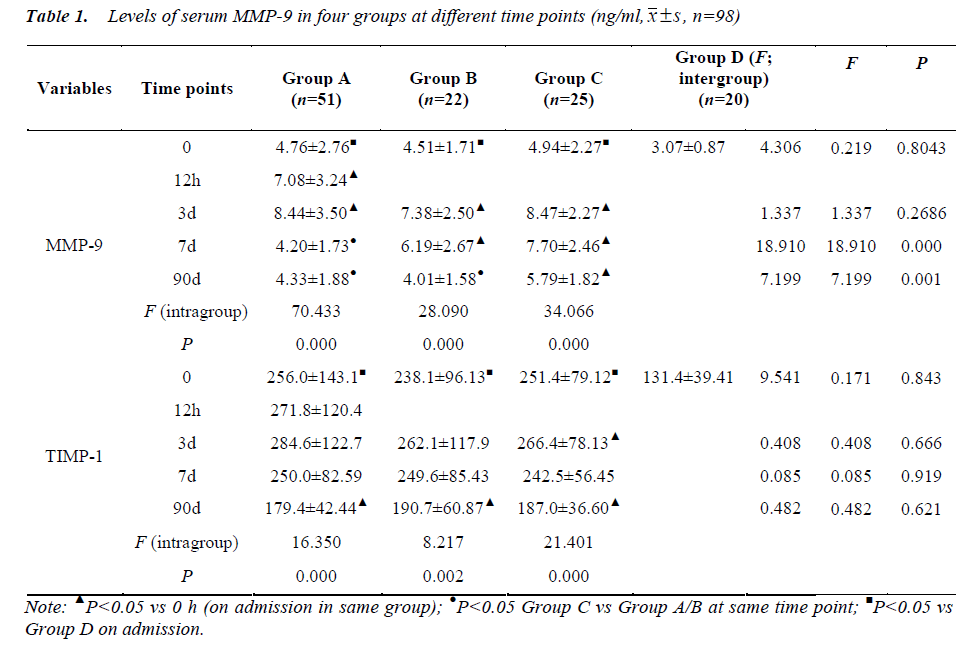 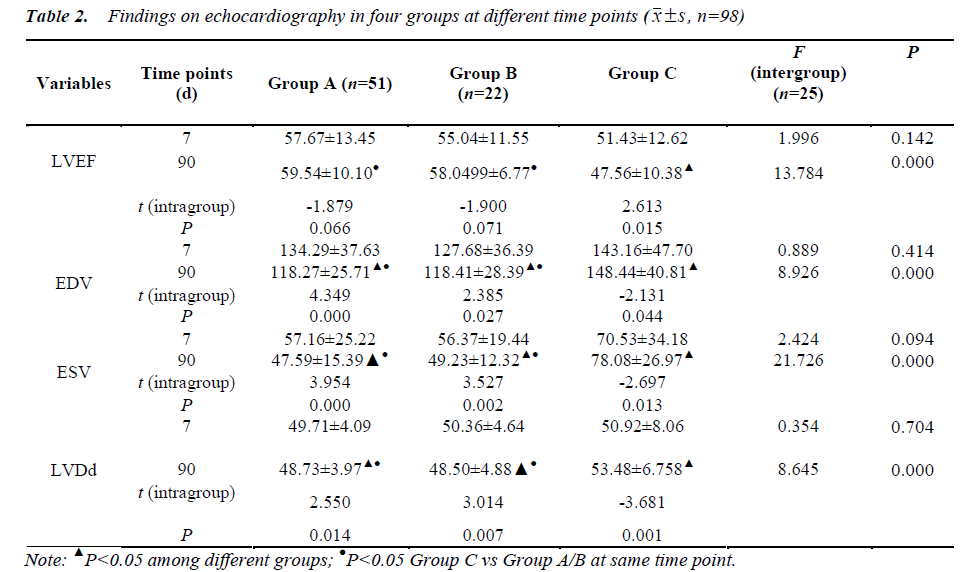 Correlation between MMP-9 level and findings on echocardiography

Table 3: Correlation between MMP-9 level and findings on echocardiography (n=98).

Following AMI, the LVRM may lead to progressive dilation and transformation of left ventricle and subsequentcompromise of cardiac function. During the post-AMI LVRM, there are abnormalities in not only myocardial cells but ECM. The ECM is crucial for the maintenance of arrangement of myocardial cells, coordination of myocardial contractibility, and the maintenance of geometrical shape of left ventricle. Under the hydrolysis of MMPs, the re-arrangement and degradation of ECM is maintained at a balanced level. TIMPs are endogenous inhibitors of MMPs. Few clinical studies have been conducted to investigate the role of ECM and MMPs in the LVRM following AMI [1-3].

Our findings indicated that the levels of MMP-9 and TIMP-1 on admission in different patients with AMI were markedly higher than those in controls (P<0.05), which suggests MMP-9 may be related to the instability of coronary plaques [4] and has promise to become an important predictor of AMI. In Group A, the MMP-9 increased again following PCI, which may be attributed to the plaque rupture and damage to blood vessels after balloon dilation and stenting. In Group A, the MMP-9 at 7 d after AMI returned to the level on admission and significantly different from that in Groups B and C (P<0.05), but the TIMP-1 level was still significantly higher than that in controls and reduced at 90 d after AMI. In Group B, the MMP-9 level at 7 d after AMI was markedly higher than that on admission and retuned to the level on admission at 90 d after AMI but was significantly different from that in Group C (P<0.05). The TIMP-1 level began to reduce at 90 d after AMI. In Group C, the levels of MMP-9 and TIMP-1 remained higher than those on admission and in the controls, and the TIMP-1 level start to reduce at 90 d after AMI. These findings suggest PCI can shorten the duration of increased MMP-9 and promote the reduction of MMP-9 when compared with pharmacotherapy alone, and this effect is more evident following emergency PCI as compared to selective PCI.

In addition, the correlation between serum MMP-9 and findings on ultrasonography was also evaluated. Results revealed the MMP-9 level at 7 d after AMI was positively to EDV and ESV but negatively to LVEF at 90 d after AMI. However, these were not associated with LVDd. These findings indicate serum MMP-9 at 7 d after AMI can be used to reflect the myocardial remodeling and predict the recovery of cardiac function following AMI. Moreover, this also demonstrates that MMP-9 plays an important role in the maintenance of myocardial structure and function. Whether MMP inhibitors can be applied in the prevention of ventricular remodeling following AMI is required to be further demonstrated [10-15].