Changes in the oral environment after tooth brushing and oral gargling

Dental caries, a major oral disease, is a dental disease that causes dental tissue loss due to the breaking away of the minerals in the teeth and the destruction of the organic substances therein. In addition, it is the most frequently occurring chronic oral disease [4]. Dental caries is caused by many factors, including the salivary and dental factors. The mechanism of the dental factors is the combination of the dental plaque and the extracellular polysaccharide that produces acid, which melts the tooth and causes tooth erosion [5]. As for the salivary factor [6], a correlation has been shown between the occurrence of dental caries and the element, hydrogen ion concentration, secretion rate, etc. of saliva. It has been reported that the saliva dilutes and neutralizes the acid in the oral cavity, and does protective action against caries by supplying calcium, phosphorus, etc., which are needed for tooth re-mineralization and for developing the acquired pellicle [7]. The saliva contains many kinds of bacteria that originate in various parts of the oral cavity and that can be acquired with comparative ease and quickly; as such, it is currently a useful medium of analysis of periodonto pathogens [8].

The representative method of removing dental plaque, the major factor contributing to dental caries and periodontal disease, is tooth brushing and oral gargling. Tooth brushing is the most common method of maintaining dental hygiene personally. Dental plaque can be effectively controlled with proper tooth brushing [11]. Generally, oral gargling is done to feel refreshed after tooth brushing, and to remove halitosis, other than to prevent dental caries and periodontal disease. In addition, oral gargle can be carried and used whenever one wants to [12]. There has been a study that reported that oral gargling removes the supragingival plaque in the anaerophyte in the deep periodontal pocket [13], and boosts dental plaque control and produces an antibacterial effect related to microbe change [14]. This study compared each study subject’s oral pH acidity, the patient hygiene performance index scores, and the number of bacteria in each study subject’s oral cavity before and after oral gargling and tooth brushing, according to the study subjects’ personal dental hygiene management routine. Thus, this study was conducted with the purpose of motivating people to properly manage their oral health by supplying relevant facts, to prevent the occurrence of the two aforementioned oral diseases.

This study was conducted for 3 d, from March 30 to April 1, 2016, on 40 students living in Kagwondo, to compare the number of oral bacteria present in each subject’s oral cavity, and the amount of dental plaque and the pH acidity therein, before and after tooth brushing and oral gargling. The subjects’ average age was the early 20s (20-24 y old). They were divided into four groups, each with 10 subjects (Table 1).

Table 1: Changes in the pH acidity, PHP index, and number of bacteria present in the oral cavity by group (CFU).

Disclosing solution was spread on the subjects’ premaxilla, and then the subjects were made to gargle with water. In sequence, pictures of the #16 buccal surface, #11 facial surface, #26 buccal surface, #36 lingual surface, #31 facial surface, and #46 lingual surface were taken using an oral camera, and the PHP index was determined. The PHP index calculation method involved dividing a tooth into five parts, with the pigmented part calculated with points, based on the following scale: 0=good; 0.1-1.7=normal; 1.8-3.4=bad; and 3.5-5.0=very bad, according to the criteria.

10 ml saliva was taken from each subject, after which it was diluted with agar, a mixture of brain heart infusion broth (Sigma Aldrich) and agar powder (Samjeon Chemistry), with distilled water 7 times, and was mixed with a superior agar medium. The mixture was then cultivated in a culture medium at 37°C for 72 h (3 d), after which the number of colonies were counted.

The before-and-after differences in the pH acidity, PHP index, and CFU of each of the experiment groups were measured using one-way ANOVA, and then the statistical significance was determined using Tukey’s test as a posteriori test. The SPSS statistic program V.19 was used for the statistical analysis, and a 5% significance level was set.

Changes in the pH acidity after tooth brushing and oral gargling

The before-and-after pH acidity values of group A, who gargled with water only, did not show a significant difference, but groups B-D showed significantly increased pH acidity results (p<0.05) (Table 1 and Figure 1). 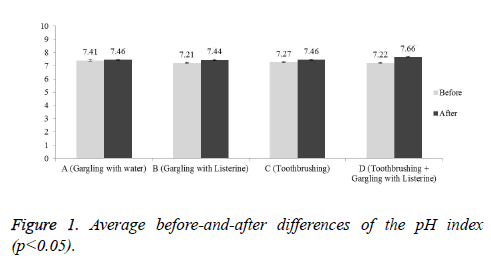 Changes in the PHP index after tooth brushing and oral gargling

No significance before-and-after difference was seen in the PHP index of groups A and B, but groups C and D showed significantly decreased PHP index results (p<0.05) (Table 1 and Figure 2). 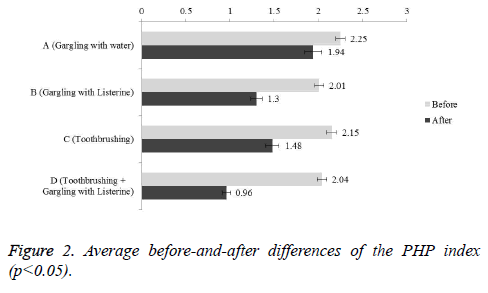 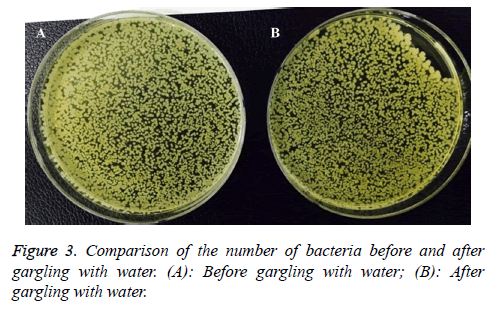 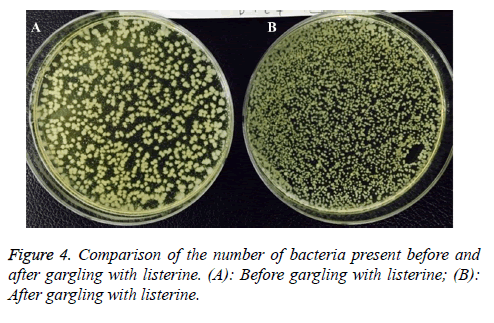 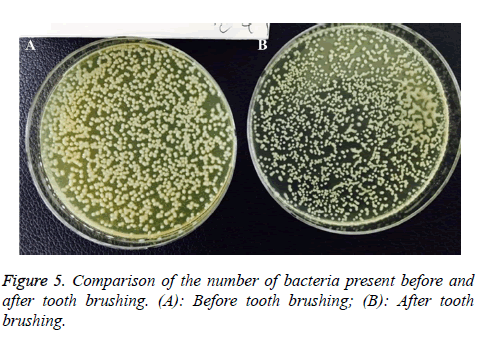 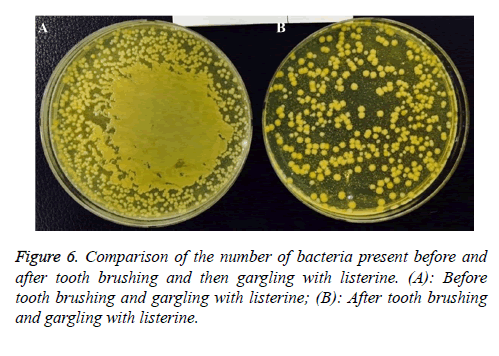 As the concept of health promotion spreads across the society, the demand for oral health is rising [15]. Oral disease is a lifestyle disease. Dental caries and periodontal disease, representative oral diseases, can be discovered early and can thus be prevented through early treatment. Most of all, it has been reported that if the primary prevention business is carried out, most people can gain benefits from such, and the level of oral health can improve, allaying the increased concerns of the public [16]. From this point of view, dental plaque, an immediate cause of oral disease, should be controlled to prevent the occurrence of oral diseases [17]. According to a prolonged tracer study, adults can prevent dental plaque and periodontal disease when they have education on both professional dental plaque management and self-management [18]. Tooth brushing, one of the representative mechanical dental plaque control methods, has been used as the most fundamental method of removing dental plaque, but it has negative aspects: it takes a long time, and most people cannot brush their teeth properly because it is hard to master the proper tooth brushing technique. Therefore, several oral gargles have been developed, and oral gargling has been introduced as a subsidiary mechanical method of removing dental plaque that can remove dental plaque more simply than tooth brushing can. Besides, research has been conducted to study the effect of dental plaque control development, using only oral gargling or tooth brushing+oral gargling [19]. Many preceding theses demonstrated that it is effective to use oral gargle in addition to tooth brushing [20]. Furthermore, countries with a better economy or with advanced healthcare development have obtained evidences for this through the assessment of the antibacterial effect against dental plaque [21-23]. Thus, a comparative analysis of the pH acidity, PHP index, and number of bacteria present in the oral cavity before and after tooth brushing and oral gargling was carried out in this study.

Saliva includes immune globulin, electrolytes, mucus, and antibacterial materials besides 99% water, its principal component; as such, it has an antibacterial effect [24]. Additionally, there has been a preceding study that reported that the saliva acts as an agent of oral self-cleaning for maintaining oral hygiene by diluting or removing foreign materials. A decrease in salivation slows down the dental-surface protection [25,26]. Dental plaque is known to occur only when there is interaction among all kinds of causative factors, such as the dental, salivary, microbe, and diet factors, elapsed time, etc. [27]. Moreover, Jeong et al. [28] measured the pH of the saliva and the saliva’s ability to absorb shock and showed that they are interconnected. Therefore, measuring the pH of the saliva should be part of the oral health inspection routine [29].

This study showed significant differences in groups B-D, but not in group A, who gargled with water only, by measuring the before-and-after pH acidity in the saliva (p<0.05). The study results revealed that tooth brushing and oral gargling change the pH into alkalescence and control the acid production in the oral cavity.

The representative oral infectious diseases, such as dental caries, periodontal disease, pulp and root apex infection, and oral and maxillofacial tissue infection, originate from infection by the oral resident flora [30]. Periodontal disease is an infectious disease caused by bacteria, and is the most important cause of tooth mortality. To prevent the occurrence of periodontal disease or to control its progress, it seems necessary to remove dental plaque, or bacteria [31]. Also, the most fundamental and effective method of maintaining oral hygiene is by removing dental plaque, which causes dental caries and periodontal disease, the representative oral diseases [32]. There were big before-and-after differences in the results of the measurement of the amount of dental plaque to check the ability to maintain one’s oral hygiene: 1.08 for the PHP index in group D, who did both tooth brushing and oral gargling, followed by group C, who only brushed their teeth and did not gargle. The obtained figures showed a significant difference: 0.67 (p<0.05). The same item was also checked in the study of Cho et al. [33], and a significant difference in the average before-and-after PHP index was also shown therein: 0.33 when only tooth brushing was done. Based on the results of this study, it can be concluded that tooth brushing+oral gargling can effectively control dental plaque and prevent dental caries.