Quality of a material and its durability in different environmental condition are two major factors influence the selection of material for fishing gears. A knowledge on the loss of properties is very useful for taking preventive measure. Present study aimed to find the changes in the properties of polyamide monofilament yarns and multifilament twines exposed to three different environments for a period of 90 days. Significant reduction in both breaking strength (P<0.05) and weight (P<0.05) was recorded in the test samples exposed to soil, water & weathering condition. The multifilament twines had more loss in breaking strength and weight than monofilament yarns in all three environments.

Polyamide is one of the most important synthetic fibre used for the fabrication of fishing gear. The efficiency of a fishing gear depends, to a very great extent, on the materials used for its construction. In the past natural materials were mainly used in fishing gears. Polyamide (PA) became the first synthetic material to replace cotton/hemp in India for the construction of fishing gear and its indigenous production was started in 1962 [1]. PA is available as multifilament twisted and monofilament single yarn for netting purpose. Previous studies showed the necessitates of frequent replacement of webbing of polyamide monofilament of diameter as thin as 0.16 mm as this lasts only for 6-9 months [2].

Abdullahi and Saidu [3] reported 18.1% and 25.7% of weight loss of nylon 6, 6 after a period of nine and fifteen months respectively when kept in soil. Moisture is a very important factor, affecting the mechanical strength of polymers. Polyamides are highly hygroscopic materials because of amine or peptide groups [4]. PA monofilament yarn of very thin diameter is extremely used for fabrication of fishing gears [5]. These nets are often used for one season only and are discarded leading to environmental pollution. To assess the change in properties of netting materials in different environments, a comparative study was taken.

Polyamide samples were buried in soil at a depth of 20 cm. Samples were tied at 2 cm interval by vinyl-coated polypropylene (PP) rope fixed on a frame. Samples were buried in the experimental site outside the Department of Fishery Engineering & Technology, Kerala University of Fisheries and Ocean Studies, Kerala, India. (Latitude of 9°54'44.92"N and Longitude of 76°19'2.67"E).

An in-situ experiment was conducted by keeping the samples in a glass aquarium of size 180×80×80 cm; having a total volume of 1000 L. The aquarium was filled with seawater collected from Chellanam, Kochi (Kerala) in plastic drums. Samples were sewn into a PP rope (2.8 cm diameter). The rope was with non-biodegradable vinyl-coated polypropylene having a diameter of about 280 mm. The rope along with the nylon samples were suspended in the aquarium, the distance between the samples was approximately 5 cm. To avoid large temperature fluctuations the tank was kept inside the laboratory.

The samples were exposed to atmospheric conditions on the roof top of the Department of Fisheries Engineering Kerala University of Fisheries and Ocean Studies, Kerala for a period of 3 months from February to May 2018. The two ends of the samples were tied to Polypropelene ropes with a 2 cm gap in between and taking care that there is no tension in the material. The ropes were mounted on a frame of 1 m x 0.7 m. This frame was kept at an area on the roof with sufficient ventilation in order to avoid the build up of excessive heat. This was kept at an angle of 45º as during the study period there was continuous sunshine on the test site.

Sub-samples from the test material were removed for measuring the change in breaking strength and weight loss after 8, 15, 30, 45, 60, 90 days of exposure. The test exposure was done from February, 2018 to May, 2018 when there was almost continuous sunshine at the test site. During this period, the mean monthly temperature in the area ranged from 31.6 to 34.1ºC.

The retrieved samples and the unexposed control samples were tested for breaking strength using a Universal Testing Machine (UTM) of model “AG-I 10 KN” as per (1992). Ten replicates of each sample were tested at each sampling and the mean value was taken. Breaking strength after a given period of exposure was calculated as a percentage of the mean initial strength of the corresponding unexposed control sample. The twine is considered unserviceable when the strength is reduced to 50% of its original value (Brandt, 1959). Weight of each replicate was measured using an electronic balance of model “BP 211 D” before and after the exposure and loss in weight was calculated.

Table 1.Breaking strength of monofilament yarn as a percentage of initial values.

Table 2. Breaking strength of multifilament twine as a percentage of initial values. 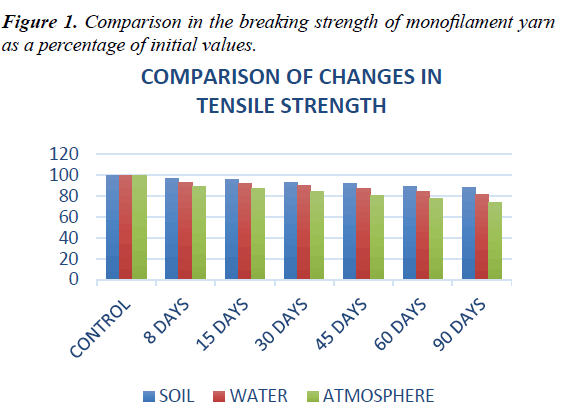 Figure 1. Comparison in the breaking strength of monofilament yarn as a percentage of initial values. 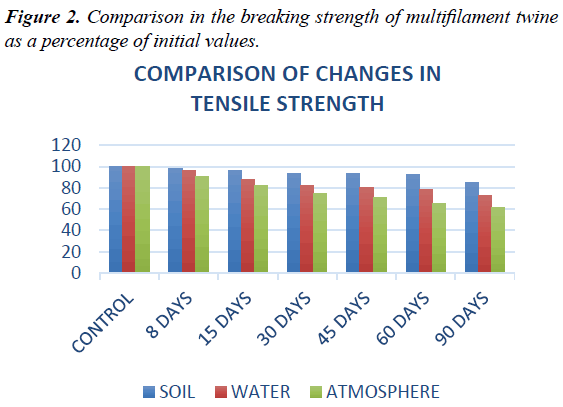 Figure 2. Comparison in the breaking strength of multifilament twine as a percentage of initial values.

With increase in exposure time the breaking strength decreased. This was observed in the case of both monofilament yarn and multifilament twine for all three environments. Relationship between breaking strength and exposure time showed a linear relationship when the regression equation fitted to the graph (R2<1 for both the samples in the all three environments). This shows that the relationship between the rate of deterioration of strength and the period of exposure was linear and this can help in predicting the service life of the material. The present observations were in conformity with those of Meenakumari and Radhalakshmi [6] for the Polyamide multifilament twines induced to photodegradation. 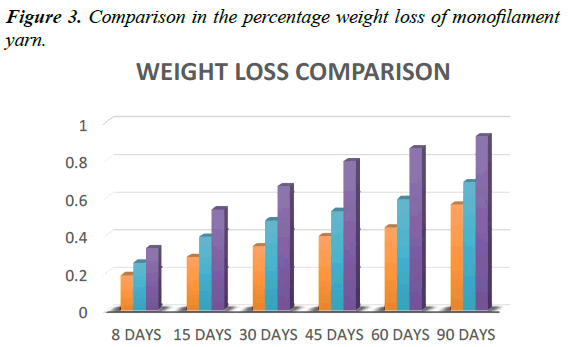 Figure 3. Comparison in the percentage weight loss of monofilament yarn. 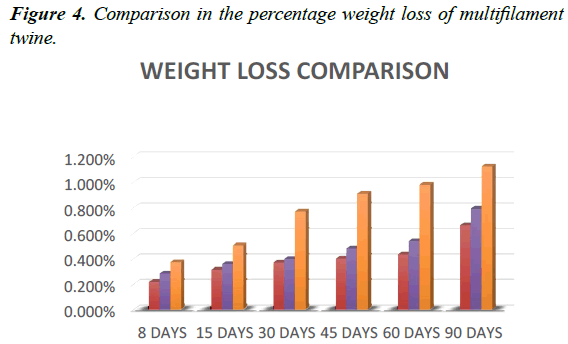 Figure 4. Comparison in the percentage weight loss of multifilament twine.

The weight lost increase linearly with increase in exposure time indicating that the process is continuous. This was observed in the case of both monofilament yarn and multifilament twine for all three environments. Relationship between percentage weight loss and exposure time showed a linear relationship when the regression equation fitted to the graph (R2<1 for both the samples in the all three environments) which can help in predicting the service life of the material.

All these results suggest that among all three environments, polyamide fishing net materials are very susceptible to degradation due to exposure in sunlight than other two environments. Among monofilament and multifilament materials, the monofilament is more resistant than multifilament. These studies suggest not to dry the nets in sunlight directly after fishing in view of the strength loss in weathering. Protection of the net from direct sunlight would extent the service life of the polyamide gear material.

The first author wishes to thank Director, Central Institute of Fisheries Technology, Kochi and Vice Chancellor, Kerala University of Fisheries & Ocean Studies, Kochi for the opportunity to carry out the work.