Despite these classic risk factors, a continued focus on newer factors is warranted as they may further improve our ability to predict future risk and manage cardiovascular disease (CVD), when they are included along with the classic risk factors. The study of these new risk factors is important since the ability to accurately predict the CVD risk of specific individual based on his/her conventional risk factor profile is limited [4]. These new risk factors are called Novel risk factors, which includes fibrinogen (primarily thrombosis marker), homocysteine (primarily atherogenic marker) and Creactive protein [5,6].

Several studies [4,5,6] conducted in different parts of the world on normal healthy subjects have reported that elevated levels of plasma fibrinogen and homocysteine are associated with CAD as an independent of other risk factors but studies reporting fibrinogen levels in coronary artery patients are limited. Moreover very few studies have been conducted in India to the best of our knowledge and also the increasing prevalence of CAD due to changing lifestyle, gave us an impetus to evaluate the changes in plasma fibrinogen, homocysteine along with lipid profile such as total cholesterol, triglyceride, High density lipoproteins-cholesterol (HDL- cholesterol) and low density lipoproteins cholesterol (LDL- cholesterol) in CAD patients of North India (Punjab) population.

The present study was conducted on 75 male patients in the age range of 30 - 60 years with angiographically established coronary artery disease (CAD) and equal numbers of age, sex matched normal healthy controls were the subjects of the present study. CAD patients were taken from the Department of Cardiology, Guru Nanak Dev Hospital attached to Govt. Medical College -Amritsar. CAD-patients had not received any lipid lowering drugs before taking the blood samples. All subjects were vegetarian, non-smoker, non-diabetic and non-alcoholic and there was no positive family history of CAD in these subjects.

1. Plasma Fibrinogen: Fibrinogen content in plasma was measured by tyrosine method as given in Varley et al, 1980 [7]. The fibrin clot is formed in the diluted plasma by the addition of calcium ions. The clot then separated from the solution and washed free of other proteins. The clot is dissolved in alkali and the protein is determined with the Folin-Ciocalteu reagent. Blue color developed was measured at 680nm. Results were expressed as mg/dl of fibrinogen.

Statistical Analysis: Numerical data were performed as mean values ± S.D. The statistical significance was evaluated by students “t” test and the difference between CAD –patients and normal health subjects (control) was considered significant at p<0.05. 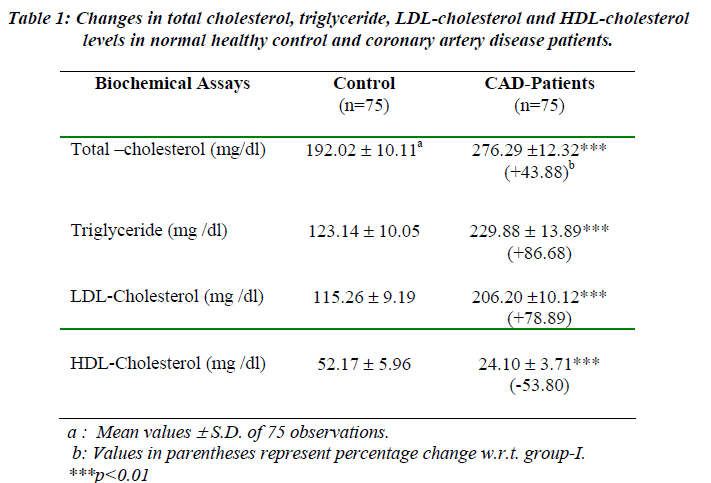 In CAD patients, we found a significant increase (p<0.001) in fibrinogen level by 57.37% with respect to control subjects that is from 306.12 ± 12.21 mg/dl to 481.75 ± 15.15 mg/dl (Table-2). Fibrinogen is a circulating glycoprotein that acts at final step in the coagulation response to vascular and tissue injury. There are several mechanisms by which fibrinogen may increase cardiovascular risk. First, it binds specifically to activated platelets via glycoprotein IIb/IIIa, contributing to plate aggregation. Second, increased fibrinogen levels promote fibrin formation. Third, it is a major contributor to plasma viscosity. Finally, fibrinogen is an acute phase reactant that is increased in inflammatory states [19,20]. A significant increase of fibrinogen level in the present study suggesting that fibrinogen is directly associated with CAD and also indicates that fibrinogen may play an important role in plaque rupture & thrombosis in response to inflammation.

Homocysteine, a nonessential, sulphur containing amino acid and an intermediate from the metabolic demethylation of dietary methionin found to be significantly increased (p<0.001) from 12.48 ± 1.23 to 18.92 ± 2.11 mM/dl by 51.62% with respect to normal healthy subjects (Table-2). The increase of homocysteine level might induce atherothrombosis via the formation of homocysteine thiolactate, a byproduct of oxidation of homocysteine. Homocysteine thiolactate combines with LDL to form foam cells [21,22].. The LDL rich foam cells embed themselves in the vascular endothelium and become fatty streak, which is the beginning of an atherosclerotic plaque. Homocysteine thiolactate could also impair the oxidative phosphoryation and enhancement of the proliferation and fibrosis of smooth muscle cells [23]. Homocysteine may also induce atherosclerosis by affecting endothelial derived relaxing factor that is nitric oxide. Nitric oxide combined with homocysteine in the presence of oxygen to form snitroso homo-cysteine, which inhibits sulfhydryl dependent generation of hydrogen peroxide. The bioavailability of NO. is decreased due to endothelial cell injury. This dysfunctional endothelial may be due to generation of oxygen radicals produced by homocysteine. Homocysteine may also reduce the antioxidant status, which could injure endothelial cells [24]. Therefore, a significant increase of homocysteine level in the present work could be responsible for the pathogenesis of CAD. 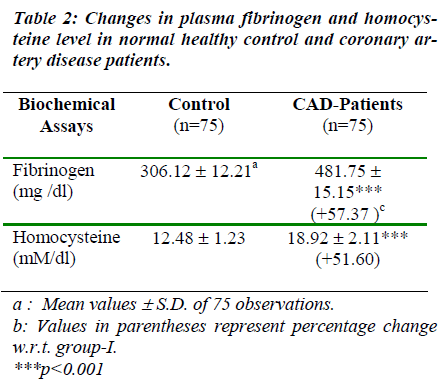 In conclusion, the aforementioned observations suggested that elevated levels of fibrinogen and homocysteine could be responsible for the pathogenesis of CAD and thereby the estimation of fibrinogen and homocysteine might be considered for screening programs, aimed for identifying individuals at high risk for cardiovascular disease in Indian population.