Objective: To evaluate the role of CHA2DS2-VASc score in predicting the intracoronary thrombus burden in patients with ST-Elevation Myocardial Infarction (STEMI).

Background: High intracoronary thrombus burden is associated with reduced procedural success, larger infarct size, and mortality after Primary Percutaneous Coronary Intervention (PPCI). Prediction of thrombus burden before PPCI might be useful by enabling the detection of patients at risk for these complications.

Methods: We retrospectively evaluated 164 consecutive patients who presented with STEMI within 12 h after the onset of chest pain between January 2015 and June 2016. PPCI was performed within 1 h after admission. Thrombus burden was graded according to Thrombolysis in Myocardial Infarction (TIMI) thrombus score. The patients were stratified into low (grades 1, 2 and 3) and high thrombus burden groups (grades 4 and 5). CHA2DS2-VASc score was calculated for each patient.

We aimed to evaluate the role of CHA2DS2-VASc score in predicting the amount of intracoronary thrombus burden in STEMI patients undergoing PPCI.

We retrospectively evaluated 164 consecutive patients admitted to our hospital with STEMI between January 2015 and June 2016. STEMI was diagnosed based on a history of a typical chest pain lasting at least 30 min and ST-segment elevation of 1 mm or more in at least two contiguous leads or 2 mm or more in leads V1 through V3 on the electrocardiography. Patients admitted to the hospital within 12 h after the onset of chest pain were enrolled. All patients underwent PPCI within 1 h after hospital admission. All PPCI procedures were performed using the standard femoral approach. Aspirin 300 mg, clopidogrel 600 mg, and heparin 100 u/kg were administered before the procedure. None of the patients were pre-treated with a thrombolytic agent or a glycoprotein IIb/IIIa inhibitor. Exclusion criteria were as follows: chest pain longer than 12 h, stent thrombosis, cardiogenic shock, previous revascularization, pacemaker implantation, oral anticoagulation use, atrial fibrillation during or before admission, severe renal or hepatic insufficiency and bleeding diathesis. This study protocol was approved by the local ethics committee. Data from subjects were analyzed retrospectively.

Coronary angiograms that were stored in hospital database were reviewed. All angiograms prior to the intervention were assessed for Infarct-Related Artery (IRA), which was determined by angiographic and electrocardiographic features, and for thrombus grade, which was based on visual estimation. The angiographic sequence of IRA that best demonstrated the thrombus was selected for analysis. Analysis of the angiograms was performed by 2 experienced cardiologists who were blinded to CHA2DS2-VASc scores of patients. In case of disagreement, another cardiologist’s opinion was obtained. Thrombus burden was graded according to TIMI thrombus score as follows: Grade 0, no thrombus; Grade 1, possible thrombus; Grade 2, the thrombus' greatest dimension is <1/2 vessel diameter; Grade 3, greatest dimension>1/2 to <2 vessel diameters; Grade 4, greatest dimension>2 vessel diameters; Grade 5, total vessel occlusion due to thrombus [8]. The patients were stratified into low thrombus burden (grades 1, 2 and 3) and high thrombus burden groups (grades 4 and 5) according to thrombus score.

The data are presented as mean ± standard deviation or n (%). The Kolmogorov-Smirnov test was used to evaluate the distribution of continuous variables. Continuous variables were analyzed with either Student’s t-test or Mann-Whitney U-test. Categorical variables were analyzed with either the Chi-square test or Fisher’s exact test. In logistic regression analysis, high thrombus burden was accepted as dependent variable. Optimal cut-off value was calculated by using Youden index. The Receiver Operating Characteristics (ROC) curve was used to demonstrate the sensitivity and specificity of CHA2DS2-VASc score and its cut-off value for predicting high thrombus burden. 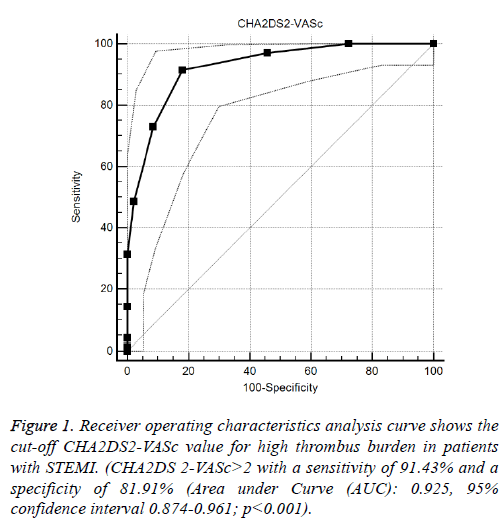 When additional variables are added to the model (Smoking, Hyperlipidemia, MI type, IRA, Number of Vessels, HG, WBC, Platelet, MPV, LDL, HDL, TG, Anti-agregan use) they are not found to be significant determinants of high thrombus burden.

In another multivariate binary logistic model where VASc score group were added to these additional variables it is found that Higher VACS score (HR:48, p<0.001) is related to High thrombus burden, with a classification accuracy of 86%.

CHA2DS2-VASc score is a well-known score, and it has been widely used to assess the risk of thrombus formation and embolism in patients with non-valvular atrial fibrillation. It is simple to use, time saving, and easily applied at bedside. It includes some of the traditional risk factors for coronary artery disease. Besides the application for the assessment of thromboembolic risk in patients with atrial fibrillation, it was also studied in patient groups with coronary artery disease. It was demonstrated that higher CHA2DS2-VASc score was independently associated with increased 1-y all-cause mortality in a study consisting of 13422 ACS patients [7]. Several other studies have evaluated whether CHA2DS and CHA2DS2- VASc score can be used to predict the risk of adverse events among ACS patients. Similar findings were reported [18-20]. CHA2DS and CHA2DS2-VASc score had prognostic value in ACS patients both with and without atrial fibrillation [20-22]. A retrospective analysis of 15681 patients with acute myocardial infarction revealed that CHA2DS2-VASc score was associated with long-term cardiac events such as myocardial infarction and all-cause death and it was found to be a more important predictor in STEMI patients than NSTEMI patients [23]. In a study of 12785 consecutive patients who underwent PCI, CHA2DS2-VASc score predicted all-cause mortality and death and nonfatal myocardial infarction in a significant and linear fashion [6]. CHA2DS2- VASc score correlated significantly with the number of diseased vessels and the severity of coronary artery disease [24]. Also, it is an independent predictor of no-reflow in STEMI patients [25]. But, data about the value of CHA2DS2- VASc score for prediction of baseline thrombus burden in STEMI patients is lacking. We found that CHA2DS2-VASc score was increased in patients with high thrombus burden compared to patients with low thrombus burden and CHA2DS2-VASc>2 had a good sensitivity and specificity to predict thrombus burden. There are some factors that are known to affect the thrombus formation, but not included in the calculation of this score. However, in multivariate analysis it is found that either the score itself, or the variables that are forming this score is the only significant predictor. This shows that in clinical practice instead of using multiple variables to come up to a conclusion, it may be better to rely on this score.

Our study has several limitations. The main limitation is the retrospective design. Another major limitation of our study is small sample size. Although angiographically visible thrombus is a predictor of intraprocedural complications in ACS, angiographic assessment of thrombus amount is less sensitive and less specific than intravascular ultrasound or optical coherence tomography. Also, some of the patients may have had undiagnosed peripheral artery disease at the time of the enrolment and this may affect CHA2DS2-VASc score. For these reasons, further prospective studies with larger sample sizes are necessary. But, our study is a hypothesis-generating study and provides rapid and easy clues to predict coronary thrombus burden before the beginning of the invasive procedure.