Background: Celiac artery compression syndrome is a rare vascular disease, that presents with constellation of symptoms including post-prantial epigastric pain, nausea, vomiting and weight loss. Patients presenting with above symptoms are initially managed conservatively. Case-description: We present a case of an adolescent female with post-prandial abdominal pain due to celiac artery compression by the median arcuate ligament. CT angiography highlights significant narrowing at the origin of the celiac artery with post stenotic dilation that was confirmed on an aortogram. Conclusion: Celiac artery compression syndrome should be kept in the differential diagnosis category for post-prandial epigastric pain associated with nausea and severe weight loss. Physicians require high index of suspicion for making this definitive diagnosis, if symptoms still persist despite conservative management. It may mimic functional gastrointestinal disorder, leading to diagnostic and therapeutic dilemmas.

It is also known as celiac axis syndrome, median arcuate ligament syndrome (MALS), or Dunbar syndrome. Clinically, it is a triad of post-prandial abdominal pain, weight loss and an abdominal bruit. Laparotomy revealed compression of the celiac artery by median arcuate ligament fibers which were divided. Intraoperative course was complicated by celiac artery disruption necessitating an aorto celiac bypass with saphenous vein graft. Patient had significant improvement, although nausea, vomiting persists due to delayed gastric emptying.

A 20-year-old female presented with a one year history of intermittent severe epigastric pain, vomiting and 20 pounds weight loss since her last pregnancy. Her symptoms abated for 2 months post-delivery before worsening again. She had multiple hospital admissions and underwent extensive diagnostic investigations. Finally, during an ER visit, a CT abdomen with contrast showed a significant focal narrowing at the origin of the celiac artery with mild post stenotic dilatation that was confirmed on CT angiography (Figure 1A) and aortogram (Figure 1B). The diagnosis of celiac artery compression syndrome was made. 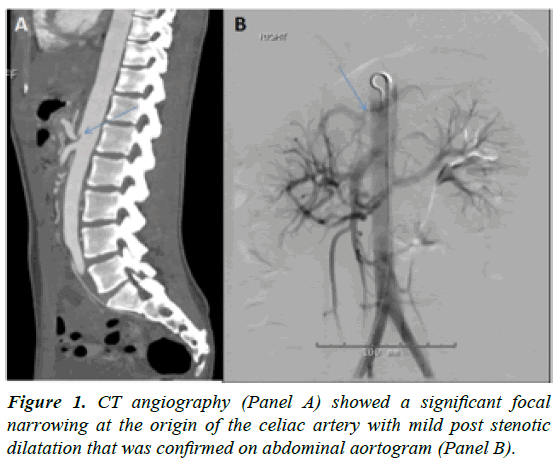 Figure 1: CT angiography (Panel A) showed a significant focal narrowing at the origin of the celiac artery with mild post stenotic dilatation that was confirmed on abdominal aortogram (Panel B).

Celiac artery compression syndrome or Dunbar syndrome is a rare entity which presents with a constellation of symptoms including post-prandial intestinal angina or epigastric pain, nausea, vomiting, weight loss and diarrhea. It was first described by Harjola [1]. Most often patients presenting with such symptoms are treated as Functional Gastrointestinal Disorder (FGID) before a definitive diagnosis is confirmed. Median arcuate ligament is a fibrous connective tissue arch situated anterior to aorta that joins the diaphragmatic crura on either side of the aortic hiatus [2]. Median arcuate ligament syndrome affects adolescents as the diaphragm descends after a period of spurt growth in adolescents. It is three times more common in females, compared to their male counterparts and typically between 18-30 years [3]. Our patient was 20 years old female presenting with epigastric pain and vomiting.

Multiple theories have been proposed to explain the clinical manifestations of this disease. According to first theory, epigastric pain is due to supply-demand mismatch in the gastrointestinal blood supply leading to ischemia and epigastric pain which also explains the temporal relation to postprandial stage due to increased demand. The second theory supports neuropathic pain due to splanchnic vasoconstriction and ischemia secondary to stimulation of celiac ganglion or plexus. Third theory suggests a “vascular steal” of gastrointestinal blood by enlarged collateral flow in patients with celiac artery compression [4,5].

The symptoms of celiac artery compression syndrome are nonspecific and resemble other benign abdominal ailments, and it is primarily considered as a diagnosis of exclusion. Diagnosis of this rare entity can be made using Computed Tomographic Angiography (CTA), Magnetic Resonance Angiography (MRA), or an aortogram. Doppler ultrasound can be used for screening patients with clinical concerns and significant elevation in peak systolic velocity in the compressed segment of the celiac artery with accentuation during expiration to >200 cm/sec can be diagnostic [6,7]. The median arcuate ligament moves cranially during expiration, causing worsening of celiac artery compression.

Several studies have shown that compression of the celiac artery, can predispose to collateral formation between celiac and SMA, namely the pancreaticoduodenal arcade which can lead to aneurysm formation due to increase in flow through the collaterals [8,9]. Size of aneurysm in relation to its parent artery (aneurysm-to-artery ratio 3) strongly correlated with rupture of aneurysm [8].

Decompression of the celiac artery is the primary goal of definitive therapy. Release of median arcuate ligament causes decompression and it could be attained by open or minimally invasive procedures like standard laparoscopic or roboticassisted approach [5,10]. Patients with residual symptoms and/ or stenosis post-surgery may require celiac revascularization using stents or bypass grafts.

Celiac artery compression syndrome should be considered as a differential diagnosis for epigastric pain, especially if it is postprandial in nature and symptoms persist despite conservative management. Non-invasive tests including CTA, MRA or an aortogram can make a definitive diagnosis.

Release of arcuate ligament can be accomplished by minimallyinvasive modalities including laparoscopic or robotic-assisted procedures well enough for decompression of stenotic celiac artery or open surgery. These procedures are safe and adverse events are infrequent. These patients, especially those with existing collaterals should be monitored for aneurysm formation.

• Clinicians must exercise a high index of suspicion to make this diagnosis in a patient with recurrent abdominal pain.

• Abdominal angiogram or CT angiography can confirm the diagnosis and definitive therapy is via open or laparoscopic surgery. 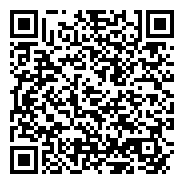