Methods: In present study, human hepatocellular carcinoma cells grown on medium treated with quercetin and celecoxib. In this effect on apoptosis and cell growth has been evaluated with help of by MTT assay and apoptosis in MDBK, HepG2 and Huh-7 cells and DAPI staining in MDBK cells. The apoptotic pathway induction by treatment group assessed with Bcl-2 and Bax protein expressional changes.

In United States of America, hepatocellular carcinoma increased around 71% in last few decades. Millions of people died annually because of Hepatocellular Carcinoma (HCC) globally which established it as leading cause of cancer related death. It may occur due to environmental factors such as hepatitis, carcinogen as well lifestyle and population with high consumption of alcohol. Liver cancer has less chances of diagnosis at earlier stages made it fatal disease. Oxidative stress and pro-inflammatory mediators are associated with various disease conditions such as diabetes and cancer. It has been reported oxidative stress and inflammatory mediators has its role in liver cancer [1-3]. HCC lacks for standard therapy by which researcher exploring different molecular targets for better treatment options. Molecular targets with differential action related to metastatic mechanism and apoptosis need to be explored. Oxidative stress and inflammation induces mechanism of metastasis hence antioxidants and antiinflammatory agents will be better combination.

Celecoxib, selectively inhibiting COX-2 reported to act as proliferation inhibitor through induction of apoptosis in cancerous cell lines and animal models of bladder, cancer and colon. Celecoxib also prompted apoptosis through death receptors D5 in human NSCLC (Non-Small-Cell Lung Carcinoma) cells [4-8]. Quercetin, a polyphenolic flavonoid constituent of vegetables and fruits having anti-oxidant, cardioprotective, anti-carcinogenic and bacteriostatic pharmacological actions [9,10]. There are several reports which shows Quercetin anti-cancer action in wide variety of cancers including colon, breast, lung, liver and oral cancers. Earlier studies also indicate that Quercetin induces apoptosis in MCF-7 breast cancer cells. Quercetin was found to arrest the cell cycle at the sub-G1. Quercetin is also reported to regulate a number of signalling proteins including MAPKs, Akt/protein kinase B, and PI3K. Celecoxib and quercetin has been established apoptotic inducer through Bcl-2 and Bax pathway in cell lines [11-14].

The present study Celecoxib and quercetin were found to be very effective anticancer activity in hepatocellular carcinoma cell lines.

Human HCC cells grown on culture medium and trypsinised and counted by cell count method using tryphan blue on haemocytometer. Cells were trypsinised and solubilized for counting with haemocytometer. After seeding cells were settled to grow and allowed to attach on surface and medium were regularly changed with 0.1 ml. Culture cells were treated with 0.1 μl quercetin and celecoxib in dose dependent manner were DMSO (0.1%) was used as control and cells were supplemented with 5% of carbon dioxide at 37°C for 72 hours. The assay was performed in triplicates. The effect of drug treatment on proliferation cells was determined with help of methylene blue method measuring absorbance by ELISA plate reader at 660 nm.

The proliferative or cytotoxic effects of drugs were evaluated using the MTT tetrazolium assay, which involves the reduction of 3-(4, 5-dimethylthiazol-2-yl)-2, 5-diphenyltetrazolium bromide (MTT) to produce formazan crystals. HCC were seeded at a density of 3 × 103 cells/well into 96 well tissue culture plates. The cells were then treated combination of drugs in triplicate and incubated for at 37°C. Thereafter, 20 μl of MTT (5 mg ml-1 in PBS) was added to each well and incubated for 4 h in dark at 37°C. After 4 h, the formazan crystals were solubilized in 50 μl of DMSO and incubated at room temperature for 15 min. Absorbance was measured at 570 nm in multimode plate reader (ModelVictor X3, Perkin Elmer) (Table 1). Absorbance given by untreated cells was considered as 100% cell growth.

Human HCC MDBK Cells were fixed on glass slide with cold methanol after washing with PBS buffer. The slides were kept for fixing for 15 minutes at room temperature. After fixation slide was washed with cold PBS twice and blocked with goat serum and further treated with Triton-X and 100 ml cold PBS for 60 min at room temperature. The slide was treated with primary antibody caspase. After 12 h slides were washed with PBS and 0.1% Tween-20 and incubated with secondary antibody horse radish peroxidase Alexa Fluor 594 for 1 h. Further slides were mounted with DAPI (4, 6-diamidino-2- phenylindole).

Briefly Human HCC cells were incubated with the combination of drugs for indicated times. The cells were washed once with DPBS. The cells were harvested and lysed in protein lysis buffer containing protease inhibitors (10 μg ml-1 leupeptin, 2 mM Phenylmethylsulfonylfluoride (PMSF) and 2 mM Na3VO4). The protein concentration was estimated by Bradford reagents. Equal protein was run on 10% SDS gel. The proteins were transferred to a nitrocellulose membrane. The blot was subjected to immunodetection with antibody against Bcl-2, Bax, p53. The densitometric analysis was performed with molecular analyst and β-actin was used as positive control.

All result data was expresses as mean ± SEM in the different treatment groups were compared. Statistical analyses were performed by Analysis of Variance (ANOVA). Significance level measured as P value less than 0.05 was considered significant.

Beneficial effects of combination of quercetin and celecoxib on apoptosis

In investigation of cell death was either because of apoptosis or necrosis effect of quercetin and celecoxib on human HepG2, MDBK and MG-62 hepatocellular carcinoma cells were observed. In this case DMSO was vehicle control while Cisplatin is used as standard treatment. In the present investigation it has been observed that anticancer action is trough induction of apoptosis as fragmented DNA get labelled with 12dUTP in the nucleus as yellow fluorescence level significantly increased from 48 h to 72 h.

In the slide caspase treated MDBK cells treated with quercetin, celecoxib and combination showed increase in caspase levels indicates combination of Quercetin and celecoxib resulted in significant increase in apoptosis through activation of caspase.

Caspases activation is an important event during apoptosis, There is doubt which caspase was analysed, is it caspase-3. Since the caspase as present as pre-caspase form and upon cleavage they are activated. It is important to see the active fragment of caspase, Immunoblotting is ideal to show the activation of caspase, or used specific antibody for activated caspase-3 which does not bind to precursor caspase. 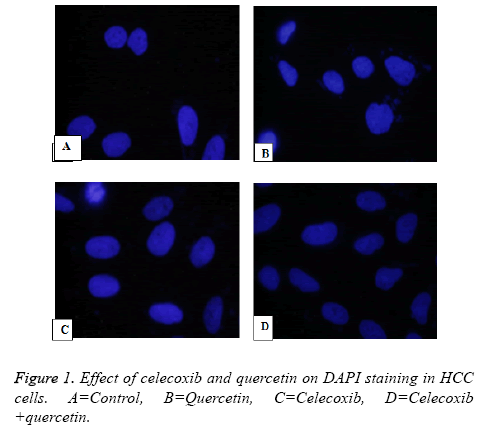 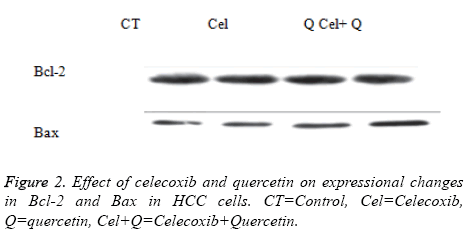 Figure 2: Effect of celecoxib and quercetin on expressional changes in Bcl-2 and Bax in HCC cells. CT=Control, Cel=Celecoxib, Q=quercetin, Cel+Q=Celecoxib+Quercetin. 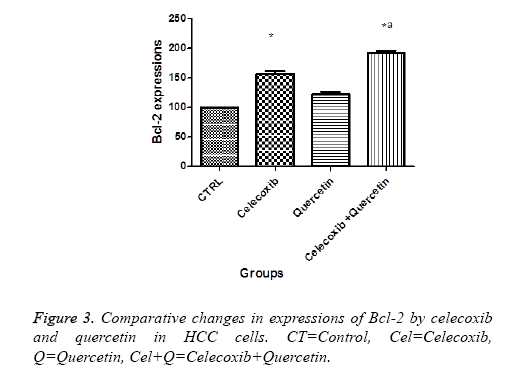 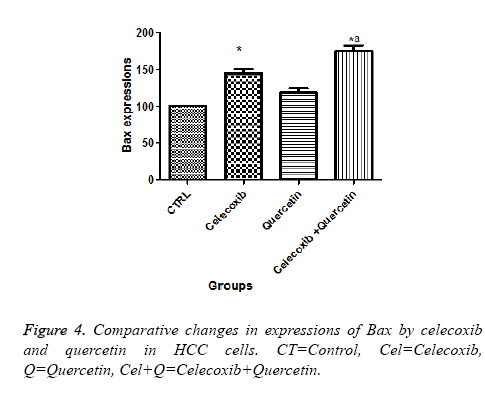 The present study was focus to elucidate anticancer mechanism of quercetin and celecoxib in various human hepatocarcinoma cell lines. The various leads from natural resources have been explored for chemo preventive action of hepatic carcinoma [15-17]. Quercetin and celecoxib was also found to exert anticancer activity and cytoprotective activity by its antiinflammatory, inhibition of oxidative stress and apoptosis. Quercetin is classified as a bioflavonoids present in various fruits and vegetables [18,19]. It is found that apple an onion has the highest amount of quercetin. In addition to anticancerous properties anti-oxidant and anti-artherogenic properties are also associated with quercetin. One of the study shows quercetin induced apoptosis in HeLa cell through an ERalpha-dependent mechanism involving caspase- and p38 kinase activation [20]. In another report it was shown that quercetin treatment on human breast carcinoma SK-Br3, MDA-MB-453, and MDA-MB-231 generates mild DNA damage and activates Chk2 kinase, which plays a crucial role in p21 induction. In addition, transcriptional repression of cyclin B1 is revealed as another mechanism of the antiproliferation effect of a low dose of quercetin [21]. Recently quercetin was shown to induced cytotoxicity in leukemic and breast cancer cells in a dose-dependent manner. It was observed that quercetin arrest the cell cycle progression in S phase tested cancer cells [22]. Moreover, it is also observed that quercetin induces apoptosis in a caspase-3-dependent pathway by inhibiting Cox-2 expression and regulates the expression of downstream apoptotic components, including Bcl-2 and Bax. Therefore Quercetin is proposed as a potent and promising medicine which might be safely used in leukaemia therapy [23]. At the same time there are numbers of reports where celecoxib is being used to target apoptosis in cancer cells. Celecoxib is basically an anti-inflammatory drug with potent anti-tumor activity against various human epithelial tumor types including colorectal, breast, non-small cell lung, and prostate cancers, this drug is found to very effective in patients with familial adenomatous polyposis. Celecoxib was reported as anticancer in colon, breast, lung testes and ovary cancer models while quercetin was also protective in various cancer models such as head, lung, neck and colon cancer. Celcoxib was selective cox-inhibitor and quercetin has an antioxidant action with potential to induce apoptosis. These drugs have been shown to effective drug resistant cancer cells even with high expression of Bcl-2. However there is big controversy with the effect these drugs in in-vitro and in animal studies. This could be because of low oral bioavailability of these drugs. Therefore there is the need to investigate the mechanism involved with these drugs in combination, since drug resistance is one of the biggest challenges. In present study, HCC were taken for the investigation. It was observed in hepatocellular carcinoma, OSU-03012 resulted in autophaghic cell death by partly accumulation of ROS instead of apoptosis. In HCC, COX-2 inhibitors induce different apoptosis signalling pathway through death receptor and caspase activation. Celecoxib through decreased production PGE2 and increased PPAR inhibit in HCC cells. Cox-2 inhibitor celecoxib and MG132 synergistically inhibited proliferation and proapoptotic in hepatocellular carcinoma cells. In the present study the effect of quercetin and celecoxib induced apoptosis in human hepatocarcinoma cells and its mechanism was studied. It was observed that celecoxib and quercetin showed inhibition of hepatocellular proliferation as alone as well in combination. The synergistic effect of cell proliferation was induced through apoptosis. Study on protein expression indicated quercetin and celecoxib induced apoptosis through changes in expression of Bcl-2 and bax expressions.

In conclusion, present study combination of celecoxib and quercetin confirmed for anticancer action through apoptosis which might be resultant caspase mediated Bcl-2 and bax changes. Combination of celecoxib and quercetin resulted in synergistic action in human hepatocellular carcinoma cells. In addition these findings indicate new potential chemopreventive actions of flavonoids in combination with antiinflammatory drug on cancer growth.

There are no conflicts.