Background: A model of Catheter-Associated Urinary Tract Infection (CAUTI) in children was established by a discriminant analysis to predict prevention of CAUTI. Methods: A case-control study was conducted with 153 cases CAUTI and 201 controls. Both cases and controls were obtained from children, parents and medical staff of pediatric ward in Adam Malik Hospital Medan, Indonesia. Results: The models incorporated 4 influencing factors that were related to prevent CAUTI, and only 3 factors determined as predictors in the model, this include: compliant for education, implementation monitoring CAUTI. The model is statistically significant (lambda=0.793, chi square=85.0, df=3, p<0.001) Conclusion: The prediction model that was established using risk factors of CAUTI is useful in preventing CAUTI. Further research is needed to confirm the validity and reliability of the model.

Catheter Associated Urinary Tract Infection (CAUTI) is the most common type of healthcare-associated infections (HAIs) which account for 25.6 percent of all hospital HAIs [1,2]. The daily risk of acquisition of urinary infection varies from 3 to 7 percent when an indwelling urinary catheter remains in place. The higher frequency of catheter use in hospitalized patients creates a higher burden of CAUTI [3]. This infection not only caused longer hospital treatment but also increased time off work and used of hospital/community resources [4]. Thus, the prevention of CAUTI is now regarded as an important issue in the hospital.

Despite multiple reports of successful CAUTI prevention directed at adult patients, little is known about the ability of these evidence-based bundles to prevent CAUTI in children [5]. Due to complexities of risk factors in children, multifactorial analysis had been suggested to prevent it [6]. Measurements used to prevent CAUTI include: used for management incontinence, alternative to indwelling catheter, history of catheter urinary, systemic antimicrobial prophylaxis and compliant for education, implementation and monitoring of CAUTI [4,7,8]. However, there is few research done to control CAUTI based on theoretical framework. This research construct a a model which predict the prevention f of AUTI by discriminant analysis.

Pediatric patients with catheter urinary at H. Adam Malik Hospitals Indonesia from January 2015 to November 2016 were included in this hospital-based case control study. Patients were enrolled at the time of catheter urinary placement. All catheters associated with patients enrolled during the study period, including prevalent catheters and new catheter insertions, were evaluated; therefore, a single patients could have contributed multiple catheter urinary. Components of the CAUTI bundles (catheter urinary insertion bundle, patient or parent and health care personnel education bundle, and monitoring discontinuing catheter bundle) were on the basis of expert opinion by The Association for Professionals in Infection Control and Epidemiology (APIC) in children [7]. This study was approved by Ethical Committee Sumatera Utara University, Indonesia and informed consent was obtained from all patients.

There are three types of catheter products that are used in managing urinary incontinence: indwelling (sometimes called a Foley) catheters, supra pubic catheters and intermittent catheters. The process of catheterization prevents a difficult-to-empty bladder from becoming overly full and reflux to the kidneys. The most common alternative to indwelling catheter are supra pubic catheters, intermittent catheters and programmed toileting.

Catheter indication evaluated from the admission, progress and notes of nurses. The used of systemic antimicrobial prophylaxis and history of catheter urinary before are documented as well. Compliance with education of health personnel on urinary catheter bundle insertion was scored (indication for urinary catheter placement, hand hygiene before and after placement, aseptic technique/use of sterile equipment, use sterile gloves, drape, an antiseptic solution for periurethral cleaning, and a single packet of lubricant for insertion). Compliance with the implementation of training bundle of patients was scored for the visit before infection with for those with UTI and at last follow-up for those without UTI. This compliance which included draining and changing catheter bags, positions of catheter and catheter bags, regular emptying of catheter bags and hand hygiene was assessed for parents/patients and provider. Compliance with monitoring discontinuation urinary catheter about time to discontinuation and reminder to discontinue them was scored for provider and parents. Compliance is defined when each patient’s comply with all elements of the bundle.

Data on Urinary Tract Infection (UTI) episodes and compliance with the bundles were collected prospectively. Urinary tract infection was defined once a patient had an indwelling urinary catheter (in place for more 2 days) with at least 1 of the following sign or symptoms: fever, hypothermia, apnea, bradycardia, dysuria, lethargy, vomiting (with no other recognized cause) and a positive urine culture of ≥ 105 CFU/ml and with no more than two species of microorganisms. Collection of urine was performed with a sterile syringe after wiping the boric sponge to catheter end. Bacteria were identified by using an ATB kit and the antibiotic sensitivities were tested by using the Kirby-Bauer method.

Seven variables were investigated in this study. A univariate logistic regression is done to identify CAUTI significant risk factors and then a Fisher discriminant analysis used to establish a simple and useful prediction model based on the significant predictors since it is able control the confounding effect and overcome the collinearity between variables. The stepwise methods were used to determine the final prediction. Discriminant variables are selected on basis of Wilks’ lambda statistic, and in general, the F value was set at F Entry=3.84 and F Removal=2.71.

A total of 354 children enrolled in this study. Among this group, 45% were boys and 31% had urologic operation. The median age at enrolment was 8 years old and median follow-up of 46 days, 165 CAUTI episodes occurred among 153 children. Table 1 compares demographic and clinical characteristics of children with and without CAUTI.

Organic Distribution and Susceptibility to Antimicrobes

Screening of the Factors

Based on univariate regression analysis, 4 out of 7 variables analyzed in the sequence were significantly associated with CAUTI prevention (Table 3).

Establishment of the Prediction Model

Based on univariate logistic regression analysis, a preventive model of CAUTI was constructed by a stepwise Fisher discriminant analysis (Fentry=3.84, Fremoval=2.71). The stepwise discriminant analysis showed that Wilk’s lambda, as a test of the discriminant function, was significant (lambda=0.793, chi square=85.0, df=3, p<0.001), and 3 variables were selected, as follows: compliant of education (X1), compliant of implementation (X2) and compliant of monitoring (X3). The final standardized disriminant function was calculated according to the following equation: Z=-0.297X1+0.273X2-0.253X3.

A receiver operating characteristics (ROC) curve is constructed to identify the accuracy of the prediction model. The area under the ROC curve (AUC) demonstrated statistical significance (AUC=0.75, p<0.001, 95% CI: 0.684-0.890) (Figure 1). 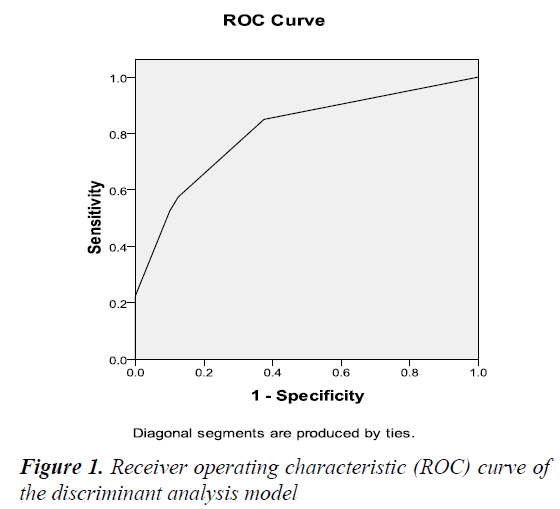 Source of microorganisms in CAUTI may be endogenous (metal, rectal or vaginal colonization) and also exogenous usually via contaminated hands of healthcare personnel during catheter insertion, manipulation of the collecting system or by parents [3]. The catheter that becomes colonized with microorganisms lived within the biofilm, resistant to antimicrobials, host defenses and virtually impossible to eradicate without removing the catheter [4,9]. The distribution of pathogens associated with CAUTI in this cohort are Escherichia coli and followed by Enterobacter spp., both found dominant pathogens isolated and consistent with the importance of gastrointestinal tract contamination as risk factor for infection. In this study, resistance to ampicillin is found higher for Escherichia coli, but minimal for Enterobacter. The mechanism antibiotic resistance in Enterococci is the strategies to control these organisms [10]. However, ﬁnding from such attempts may help public health communities in prioritizing problems and utilize resources more efficiently.

Prevention of CAUTI in children is now regarded as an important hospital policy worldwide. Most studies have focused on ways of reduction/prevention of CAUTI, while effective preventive prediction tool is still lacking. Such tool can be used to identify high-risk children while to doctors and parents, as decision when the urinary catheter could be omit. Any means to prevent CAUTI will need to adapt to the changing nature of medicine and health-care delivery.

Little is known about the ability of these evidence-based bundles to prevent CAUTI in children [11,12]. Those who care for them must appreciate that there are several concerns related specifically to their age, such as issues of catheter securement that is difficult to use in small children; issues of distracting method so that the procedure could be comfortable and issues of attention to familycentered care could create cooperative children. How about the model? Classic model allows assessment of the importance of variables under real conditions, in contrast with discriminant analysis models which identify factors responsible for observed patterns of occurrence and may provide guidelines for the design efficient way to reduce CAUTI [6]. Discriminant analysis can use as a dependent variable a categorical variable with more than two groups. All of them have different sets of coeffcients and produce a discriminate score, but they have different classiﬁcation ability [13].

This study screened 4 factors related to CAUTI, but only 3 factors used as predictor entered the discriminant function. Consistent with previous study that compliant of education implementation and monitoring CAUTI were significantly associated with prevention of CAUTI. Educating the provider, parents and children using posters, meeting and presentation about CAUTI are done in the hospital. However, dissemination of these practices alone in the hospital, does not change behavior, rather they should be introduced in the form of educational and practical (implementation), also evidence-based training. Improved compliance with standardized care practices during hospitalization could reduce the rate of catheter-associated infection. Prevention of CAUTI, information about risk of CAUTI should be provided to health provider, children and family members and would be better in the form of team, task oriented and problem based [14,15].

The model from this study had good specificity but low sensitivity. The factor selected by discriminant analysis were common risk factors and not specific for CAUTI and this serve as study limitation. Many factors could influence it such as communication/interaction between physicians, nurses and parents. Study by Erasmus et al. showed lack of positive role models established by senior physicians may hinder compliance [16]. There is a need to educate nurses and parents to avoid routine use of urinary catheters, to remove them when they are no longer needed. Interactions between physician-nurses and parent are associated with patient outcomes and quality of care [17,18]. This model as well was implemented quality improvement practices that have been shown to influence the rate of CAUTI but needed to confirm validity and reliability.

The prediction model that was established using the prevention of CAUTI is useful in preventing CAUTI in clinical practices. Further research is needed to confirm validity and reliability model.

We acknowledged the Department of Clinical Microbiology and Medical Record Installation in H Adam Malik Hospital.