The Biceps brachii muscle belongs to the flexor group of muscle in arm. It is the only flexor muscle of the arm which crosses the shoulder as well as the elbow joint. As Biceps brachii muscle has two heads, short head and long head. Long head originates from the supraglenoid tubercle of scapula and short head originates from the coracoids process of scapula [1]. Distally, these two heads join to form a common tendon which inserts on the radial tube-rosity, and some aponeurotic fibers form the bicipital aponeurosis which merges with deep fascia of forearm. This muscle mainly contributes to flexion and supination of forearm [1]. The Biceps brachii muscle is innervated by the musculocutaneous nerve and supplied by brachial and anterior circumflex humeral arteries [1]. It has been reported that in 10% cases, the third head of Biceps may arise from the superomedial part of the brachialis and is attached to bicipital aponeurosis and medial side of ten-don insertion [1]. In the present case , we report a origin of third head of Biceps from upper third part of humerus at insertion of deltoid muscle in the humerus. The muscle was innervated by musculocutaneous nerve. Variations of third head of Biceps may present as a group of accessory fascicles arising from the coracoid process, the pectoralis major tendon, head of humerus, articular capsule of hu-merus or from shaft of humerus itself [2]. The presence of this accessory Biceps head may be important for aca-demic and clinical purpose. Unless symptomatic the third head of Biceps brachii may not be detected in clinical studies [3]. The third head may provide additional strength to the Biceps during supination of the forearm and elbow flexion irrespective of shoulder position [4].

The presence of third head may cause unusual bone dis-placement subsequent to fracture such variations have relevance in surgical procedure [5]. Anatomic variant that arises from persistent division between short head and long head of Biceps can be characterized with MRI know-ledge of variations in the muscle is important to character-ize injury to the components and to avoid pitfalls in im-aging diagnosis. Injuries to Biceps tendon can include tendinosis ,partial and full thickness tears and complete rupture, although injuries to Biceps tendon are less com-mon but if present that require not only correct diagnosis but also accurate characterization to appropriate guide therapy [6]. Although the third head of Biceps brachii is a common occurrence in mammal. Previous studies in hu-man being show that the third head of Biceps brachii is seen in about 8% of Chinese, 10% of Europeans, 12% of Black Africans, 18% of Japanese [7] and merely 2% in Indian population [8]. Thus the occurrence of the third head of Biceps brachii in Indian population is rare.

Both extremities of 10% formalin fixed 10 cadavers irre-spective of age and sex was dissected for the study. The arm was dissected carefully to display the full length of Biceps muscle from proximal attachment to the distal at-tachment. All other related structures were also exposed. The additional head was examined for the origin and course upto its insertion. Appropriate photographs were taken (Figures 1, 2). Among the 10 cadavers dissected, the third head of Biceps brachii was present in the left arm of adult male cadaver. The third head of Biceps brachii arose from upper third of humerus at the V shaped insertion of deltoid muscle (Figure 1). Third head of Bi-ceps was present medial to both long and short head of Biceps. All three heads of Biceps were supplied by musculocutaneous nerve (Figure 2). Third head descended and merged with other two heads to form common tendon and was inserted on posterior part of radial tuberosity. No other abnormalities were observed. 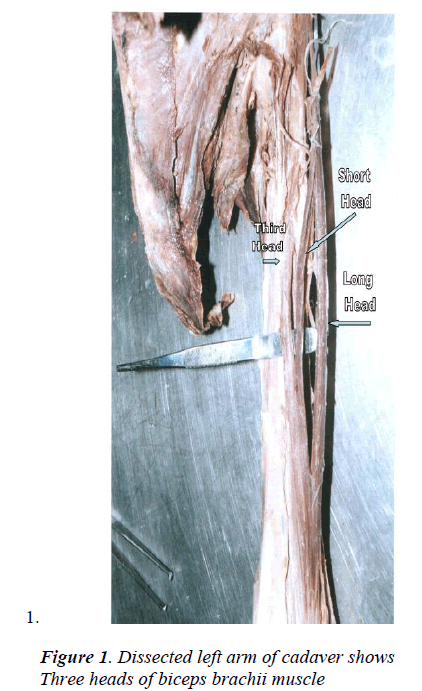 Kosugi et al and Asvat et al stated that there are no clear gender and racial differences in the occurrence of super-numerary head of Biceps [10,12]. Emeka, Emmanuel [13] reported unilateral third head of Biceps was lying be-tween the long and short heads. The third head was run-ning within the capsule of shoulder joint along the bicipi-tal groove to pick origin from supraglenoid tubercle of the humerus [13].

In the present case the course and branching of musculo-cutaneous nerve was normal. Hitendrakumar et al ob-served the musculocutaneous nerve to have a characteris-tic branching pattern in between the long head and the third head. Knowledge of such variation may be impor-tant for surgeons operating on the arm and clinicians di-agnosing the nerve impairment[9].