This case report was occasioned by the ascertainment of a 25-year-old Chinese man (IV-1) married to a nonconsanguineous woman with normal chromosomes (IV- 2). This couple had had a son who died at age 6 months, was buried without an autopsy, but had had a chromosome study because of cerebral palsy. The karyotyping analysis of IV-1 is Authenticated by the Chinese Academic Committee of the state key laboratory of medical genetics with the previously undescribed balanced human karyotype 44,XY,der(14;15)(q10;q10),der(14;15)(q10;q10).

The parents of the propositus are phenotypically normal first consins, each a carrier of the same Robertsonian translocation (ı-1, ı-2). Their parents, a mutual uncle, and both grandparents are deceased, thus it is not possible to determine whether I-1 or I-2 was the carrier of the translocation. 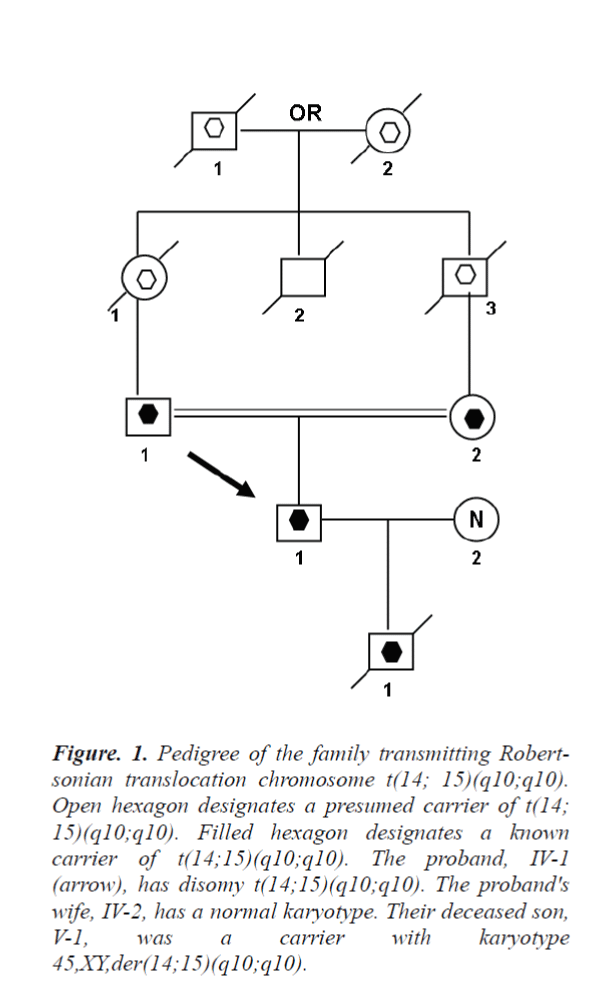 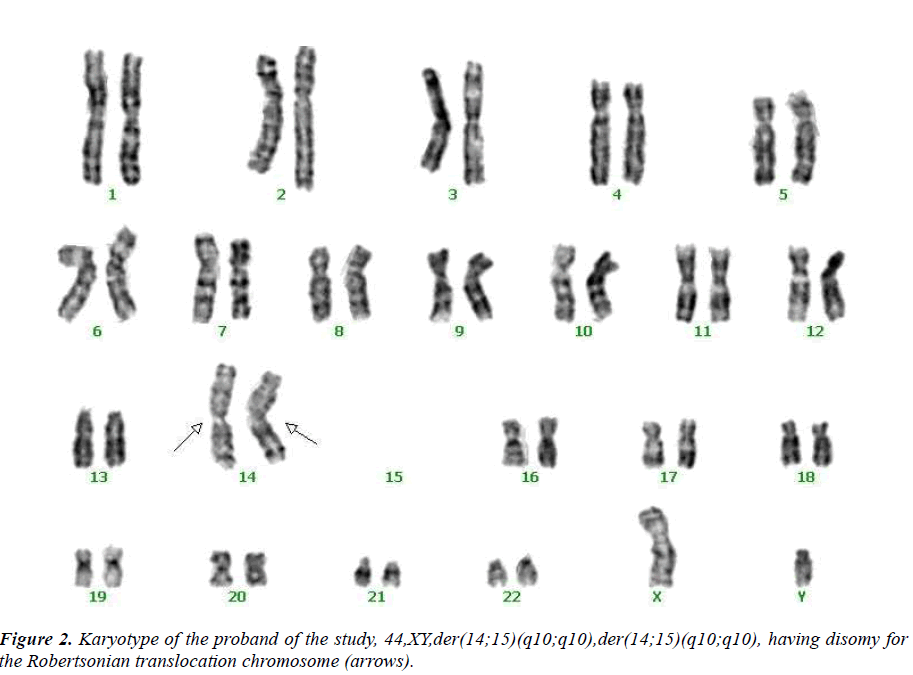 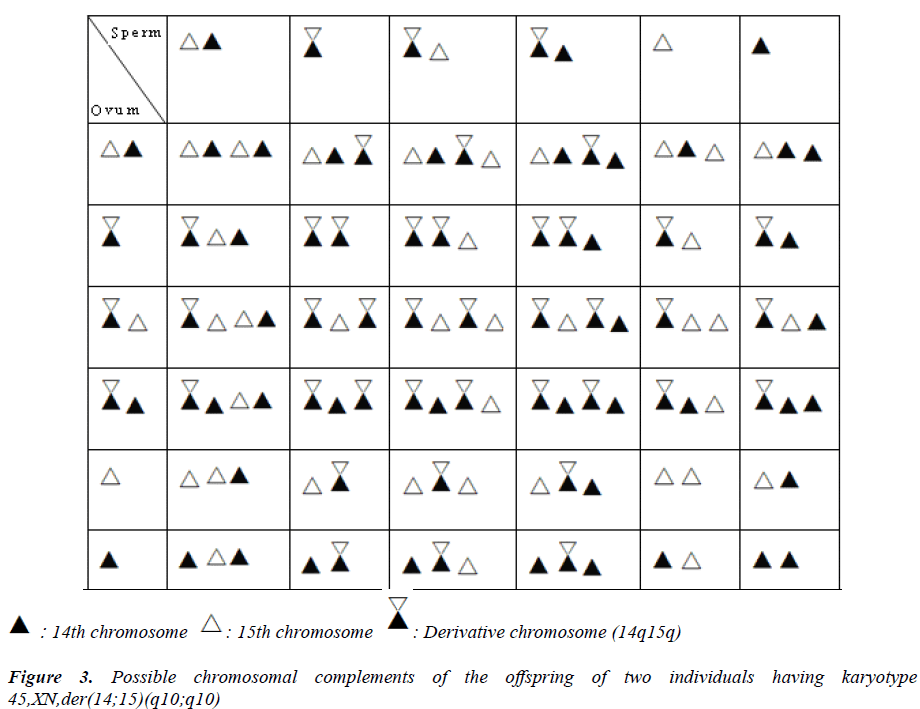 Figure 3: Possible chromosomal complements of the offspring of two individuals having karyotype 45,XN,der(14;15)(q10;q10)

• Unbalanced gametes is 4/6; and their probability of producing

• A child with a balanced Rob chromosome is 6/36

• A child with a disomy Rob chromosome is also 1/36

• A genetically unbalanced zygote is 28/36, will increase pregnancy loss in early stage

It is well-known that the fitness of rob translocation carries is reduced [2]; in some rob translocations the risk of unbalanced offspring may exceed 20%. The homozygous state of such a rearrangment presumably leads to infertility [3]. The concept of human aneuploidy syndromes as failed “attemps” at speciation was discussed by Neri and Opitz [4] in the context of trisomy “21”.

Rob translocation carries are phenotypically normal since they involve loss only of short arm material. Many such rearrangments in natural populations of different species are known, most famously in the house mouse, Mus poschiavinus (the “tobacco mouse”) being considered a distinct species [5], the genus Muntiacus, the cotton rats (Sigmodon) of North Amecica [6], and even rams with the Massey rob fusion [7]. What is clear from these and many other studies over the last 70-80 years is that rob rearrangments can increase polymorphisms in a species, provide material for natural selection and even lead to speciation [8-10]. John [11] has made the point that the types of chromosome rearrangments that occur as polymorphisms or as fixed permanent heterozygotes invariably involve meta- or submetacentric chromosomes. Those that distinguish species and serve to isolate these species involve telocentric or acrocentric chromosomes, which are selfsterilizing.

Robertsonian rearrangements are common chromosomal changes that can lead to rapid and efficient reproductive isolation between karyotypically similar populations, especially when many rob metacentric chromosomes display monobrachial homologies [12]. In the case of the Muntjac, little or no measurable genetic or morphological differences have been found [13].

Homozygosity for Robertsonian translocations in man has been described before. A fetus with two t(14;21) chromosomes was found by Dallapiccola et al. [14]. The related parents were heterozygous for the same translocation. Martinez et al. [15] described three adult sibs homozygous for t(13;14). Their parents were firstcousins and both were heterozygous carriers. Rajangam et al. [16] found a unique DS karyotype 45, XY, der(14;21)pat, der(14;21)mat, +21mat. Whereas translocation heterozygosity is associated with meiotic disturbances that cause infertility and subfecundity, translocation homozygosity should not have any effect on meiosis-at least in theory [15].

The propositus (IV-1) is healthy and has a balanced chromosomal complement. Assessment of a semen sample from the propositus (IV-1) showed normal sperm number and morphology. We were not able to analyse a sperm karyotype, but given his karyotype of 44,XY,der(14;15)(q10;q10),der(14;15)(q10;q10), we assume his sperm karyotype to be consistently 22,X and 22,Y. Since the propositus is phenotypically normal with normal fertility, we consider his chromosomal rearrangement to be a balanced polymorphism [11]. The aberration can provide material for evolution.

The establishment of a new human subspecies with a diploid complement of 44 chromosomes could occur if a small population with the karyotype of the propositus underwent long-term reproductive isolation.

Although a Robertsonian translocation carrier has a full genetic complement, their fitness is reduced due to high probability of genetically imbalanced gametes. However, this type of translocation can provide material for human evolution. Long term isolation of a group of individuals who are homozygous for a particular Robertsonian translocation chromosome could theoretically lead to the establishment of a new human subspecies having a full genetic complement in 44 chromosomes.

We thank Barry Starr and John M. Opitz for their help.