Introduction: Peculiar case of a tuberculoma in the midbrain, leading to superior oblique and inferior rectus palsy along with a moderate degree of ptosis of the right eye. Presenting features: 5 year-old female patient with complaints of fever, drooping of the right upper eyelid and uprolling of the right eye. 15 degree Hypertropia of the right eye with head tilt on the left side. The pupils showed sluggish reaction. Total restriction of ocular movements in the downward gaze suggesting the under action of the superior oblique and inferior rectus muscle. Moderate degree of unilateral ptosis. Vertical diplopia in downward gaze. Investigations: Cranial MRI with Intravenous contrast revealed a well-defined enhancing lesion measuring about 10 × 8 mm with small non-enhancing area noted within with significant edema in the midbrain. Presence of a tuberculoma in midbrain involving the trochlear nerve nucleus, the dorsolateral and central nucleus of the occulomotor nerve. Discussion: Partial fascicular oculomotor palsy leading to isolated inferior rectus palsy caused by midbrain infarction suggesting the possible selective involvement of an individual fascicle. Compression of the central caudal nucleus of the occulomotor nerve by the edema present around the tuberculoma gives rise to moderate ptosis in the patient. Patient received anti tubercular treatment. The improvement of the ocular symptoms after one month of anti-tubercular treatment confirmed the finding of a tuberculoma.

Tuberculosis (TB) is still an important public health problem in the developing countries with constant endemicity. It accounts for about 40% of all the intracranial Space-Occupying Lesions (SOLs) [1]. Tuberculoma of the central nervous system can occur at any site in any pediatric age group [2]. They represent 0.15%-4% of intracranial space occupying lesions [3]; their most frequent location are the cerebrum and cerebellum, less frequent are the brain stem, basal ganglia, and thalamus. Here, we report a case of a 5 year-old female child presenting with restricted extraocular movements in the right eye and ptosis of right upper lid, ultimately diagnosed to have midbrain tuberculoma by Magnetic Resonance Imaging (MRI).

A 5 year-old female patient with no previous medical history was hospitalized into the pediatric department with the complaints of fever for two days, which was undocumented, low grade, not associated with chills and rigor, the symptoms were relieved on medications. Fever was associated with headache, which was severe in intensity, localized in the frontotemporal region, relieved by medications and no aggravating factors. Patient’s attendant also complained of facial asymmetry for two days, sudden onset, which had not worsened over a span, not associated with drooling from the mouth. 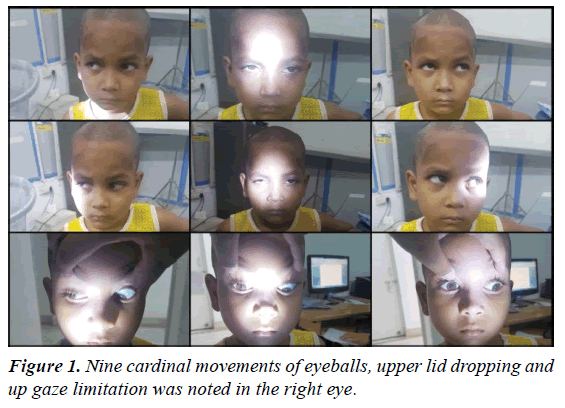 Figure 1: Nine cardinal movements of eyeballs, upper lid dropping and up gaze limitation was noted in the right eye. 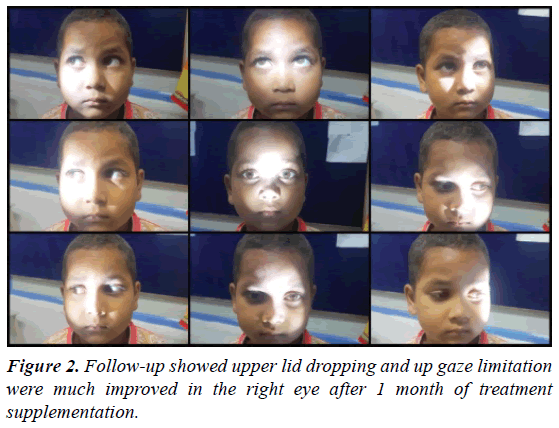 Figure 2: Follow-up showed upper lid dropping and up gaze limitation were much improved in the right eye after 1 month of treatment supplementation.

Lumbar puncture was performed-TLC 25 cells, DLCPleomorphic lymphocytes, Sugar-96 mg/dl, and Protein-10 mg/dl. CT scan of the Head and Orbit showed a normal study. Cranial MRI with Intravenous contrast revealed a well-defined enhancing lesion measuring about 10 × 8 mm with small nonenhancing area noted within. The imagining also revealed significant edema in the midbrain. The results of the MRI suggested the presence of a Tuberculoma (Figure 3). 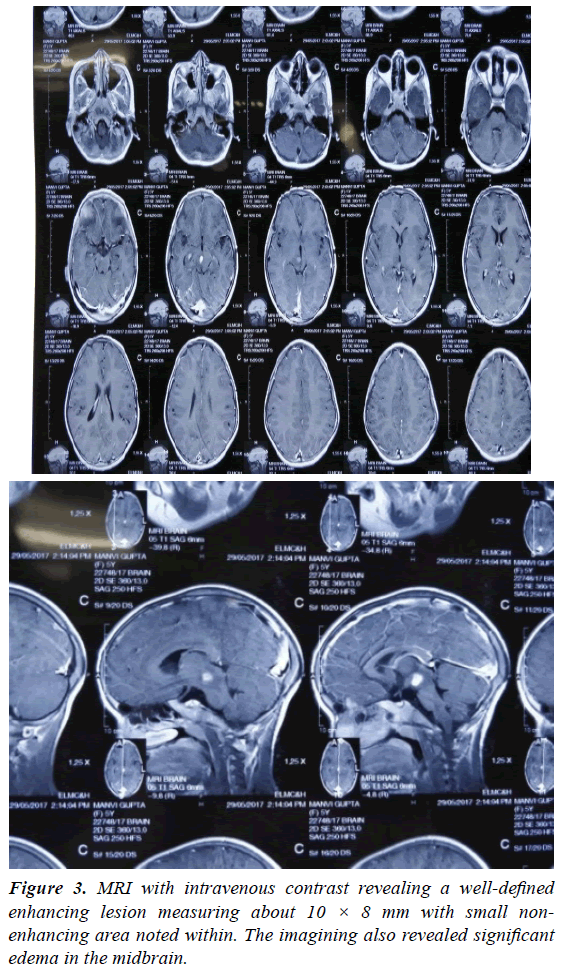 The clinical signs and symptoms, lab tests and findings of the MRI suggest a diagnosis of possible tubercular meningitis. The patient was started on antitubercular treatment of Pyrazinamide 750 mg, Rifampicin 225 mg, Isoniazid 150 mg, Ethambutol 400 mg. The patient was also prescribed oral prednisolone.

The patient was referred to department of ophthalmology with the complaints of drooping of the right upper eyelid and uprolling of the right eye. Upon further examination there was 15 degree Hypertropia of the right eye. Bielschowsky head tilt test was performed and it showed a head tilt on the left side. On slit lamp biomicromicroscopy, the pupils showed sluggish reaction and rest of the anterior segment was normal.

The three-step test is able to eliminate each extra-ocular muscle’s primary field of action. In our patient, there was restriction of ocular movements in downward gaze suggesting the under action of superior oblique muscle. This leads to a probable diagnosis of Right Trochlear nerve Palsy. The patient also complained of diplopia in the downward gaze. The visual acuity of the patient could not be assessed, as she was un-cooperative. In the head tilt position, there was no suppression and stereopsis was conserved. Drooping of the upper eyelid was also evaluated which revealed a moderate degree of unilateral ptosis. This further suggested Third nerve palsy. Fundus examination showed slight nasal blurring of the disc margins in the right eye. Rest of the fundus findings were within normal limits.

Informed consent and detailed explanation of the disease and treatment was sought from the patient’s guardians. Proper ethical clearance was obtained for the case report from the Ethical committee for medical research from our Institution.

The hematogenous spread of the Mycobacterium Tuberculosis (MT) bacteria lead a rare and serious form of tuberculosis, known as cerebral tuberculomas. Nonspecific symptoms and radiologic features sometimes lead to misdiagnosis. Due to its rarity, nonspecific symptoms and radiological findings, intracranial tuberculomas remain a clinical challenge [4]. CNS tuberculosis accounts for approximately 1% of all cases of tuberculosis, carries a high mortality and a distressing level of neurological morbidity, and disproportionately afflicts children and human immunodeficiency virus (HIV)-infected individuals [5].

Due to the long path, the 4th nerve has through cranium, trochlear nerve palsy is commonly seen after head trauma, compressive lesions or microvascular ischemia [6].

Tuberculosis is a major health risk for patients of the low socio economic background. It is easily spread in the population residing in densely populated unsanitary conditions. Our patient was also of low socioeconomic class and lived in poor hygiene conditions.

Reddy PS et al., studied three cases in which there was a combined paralysis of 3rd and 4th cranial nerves which was because of tuberculous meningitis [7]. In another study, Rama et al. observed 90 cases of ophthalmoplegia with a solitary patient with isolated 4th nerve palsy in a case of tumor the brainstem [8]. Neurotuberculosis with tuberculoma was the etiology in 19 cases where there was 6th cranial nerve alone or a combined palsy of 6th and 3rd cranial nerve.

Cranial nerve IV or the Trochlear nerve innervates the superior oblique muscle, which is responsible for depression and intorsion of the eye. In our case, there was 15 degree of hypertropia of the right eye. The patient also exhibited compensatory torticollis on the left side. Vertical diplopia was also present in our patient in the downward gaze. The Parks-Bielschowsky three step test showed a hypertropia of the right eye and this worsened with adduction and ipsilateral head tilt. To relieve the diplopia suffered in superior oblique palsy, the patient turns or tilts the head which allows better alignment of the eyes.

The medical therapy was continued over the next 9 months and in subsequent follow up, the systemic symptoms of fever and headache improved with treatment, along with the resolution of the tuberculoma.

The authors certify that they have obtained all appropriate patient consent forms. In the form the patient(s) has/have given his/her/their consent for his/her/their images and other clinical information to be reported in the Journal. The patients understand that their names and initials will not be published and due efforts will be made to conceal their identity, but anonymity cannot be guaranteed.