Case Report: Membranous fat necrosis of the gallbladder as the cause of peculiar foreign body reaction in a patient with severe chronic cholecystitis

Membranous fat necrosis (MFN) in the gallbladder is rare. We found marked MFN as the cause of peculiar foreign body reaction in a Japanese woman in her late seventies, with severe chronic cholecystitis. Histopathological examination of the extirpated gallbladder revealed severe grade chronic cholecystitis accompanied by many multinucleated giant cells and phagocytizing yellowish wavy membranous substance in the subserosal layer. The results of Sudan black B, Luxol fast blue, and Ziehl-Neelsen staining of the substance were all positive. CD68 antibody was strongly positive in multinucleated giant cells. These findings suggested that the membranous structures were the products of MFN, which was recognized as a foreign body and phagocytized by macrophages. Stenosis of intramural sclerotic arteries induced chronic circulatory disturbances leading to MFN that resulted in a peculiar foreign body reaction in the subserosal fatty tissues of the gallbladder. To our best knowledge, these findings have not been reported in the literature thus far.

Membranous fat necrosis (MFN) [1-5], membranocystic change [1,6,7], or lipomembranous panniculitis [8,9] are usually found in skin-related diseases[7,9,10,11] and rarely occur in organs other than the skin [2-5]. However, if these changes are systemic, the brain and skeletal systems are mainly affected. Nasu et al. reported such a case for the first time in 1973 [6]. Subsequently, focal MFN was accidentally detected as one of the main histopathological changes in various kinds of skin-related diseases, such as systemic lupus erythematosus [7,9,11], systemic sclerosis [10], diabetes [1,8], and scrotal and/or perineal lipogranuloma [12,13]. MFN has rarely been reported in the breast [2], lipoma [3], appendices epiploicae[4], and mature teratoma of the ovary [5].

In this study, we present a case of MFN in the gallbladder, which is extremely rare. We detected MFN in the extirpated gallbladder in only 1 case among 1,538 consecutive cases during the past 13.5 years in Matsuyama-shimin Hospital. Interestingly, a marked foreign body reaction was detected, accompanied by multinucleated giant cells and phagocytizing peculiar membranous structures of MFN. We observed that phagocytized MFN was stained distinctly with Sudan black B (SBB) in a dewaxed section.

The patient was a Japanese woman in her late seventies who had undergone laparoscopic resection of the gallbladder. The wall of gallbladder was thickened due to chronic inflammation caused by hemorrhages and severe fibrosis (Fig. 1). The extirpated gallbladder was fixed in 10% formalin solution and embedded in paraffin. The dewaxed sections were stained with hematoxylin-eosin (HE), periodic acid-Schiff (PAS), and diastase-digested PAS (D-PAS), elastica van Gieson, Berlin blue, Victoria blue, orcein, Schmorl, prolonged Ziehl-Neelsen (Z-N), SBB, and Luxol fast blue (LFB) stains. Immunohistochemical staining was performed, as described previously [13,14], by using labeled streptavidin-biotin (LSAB)2 kit/horseradish peroxidase (HRP) (DakoCytomation, Kyoto, Japan) with diaminobenzidine as the substrate and antibodies against macrophage-associated antigen CD68 (1:50, pronase pretreated; Dako, Kyoto, Japan) and S-100 protein (1:100, no pretreatment; Dako, Kyoto, Japan).

A written informed consent has been obtained from the patient, and her identity has been protected.

The entire fundamental mucosa was not retained and its surface was widely denuded in the extirpated gallbladder (Fig. 1). No epithelial covering cells were found on the surface. The wall was thickened due to fibrosis and severe hemorrhage, revealing several cystic sinuses and many superficial macrophages containing hemosiderin. In the subserosal layer, peculiar multinucleated giant cells were scattered (Fig. 2a) and gathered focally, and these cells contained light yellowish membranous structures in their cytoplasm (Fig. 2b). A membranous yellowish substance was also embedded in the cell wall without an accompanying foreign body reaction. Fine membranous products of MFN were obviously phagocytized by macrophages (Fig. 2b). These findings were often detected in the indicated areas in Fig. 1. D-PAS reaction was positive for phagocytized MFN. In order to identify these structures precisely, SSB staining was performed using dewaxed sections; this staining revealed distinct peculiar black membranous structures in the cytoplasm of multinucleated giant cells (Fig. 3a). The surface of MFN was fluffy and had a microwave-like pattern (Fig. 3b). LFB also showed a complicated lamellar structure in the cytoplasm of multinucleated giant cells (Fig. 4). The cytoplasm of multinucleated giant cells was positive (Fig. 5), but the phagocytized membranous substance was negative for CD68 antibody. S100 protein antibody was negative for all the giant cells. Prolonged Z-N staining also gave positive results for MFN. However, the results of Berlin blue, orcein, Schmorl, Victoria blue, and elastica van Gieson staining were all negative. Thus, the results of SBB as well as prolonged Z-N, D-PAS(focal), and LFB staining were all positive for MFN in dewaxed sections. These results suggested that complicated membranous structures in the cytoplasm of multinucleated giant cells were produced by MFN.

Figure 2. Markedly thickened gallbladder wall due to severe chronic inflammation(a). High magnification of a multinucleated giant cell revealing distorted membranous materials in the cytoplasm(b). HE stain, a: 40×, b:400×. 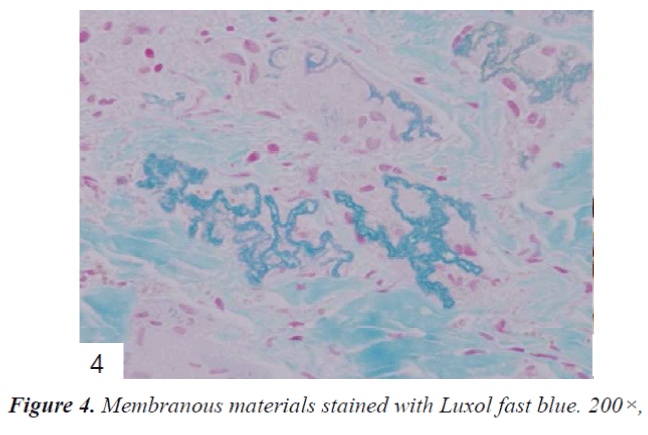 With regard to the histogenesis of MFN in this case, MFN was mostly thought to be caused by chronic circulatory disturbances. The stenotic or obstructed arteries due to arteriosclerosis were often detected in the wall (Fig. 6a), which was clearly visible after elastic fiber staining(Fig. 6b&c). Further, marked fibrosis, hemorrhage, and inflammatory cell infiltration were also observed in the wall, which appeared to be other causes of ischemic reaction in the gallbladder.

Figure 6. Arteriosclerotic changes in an artery in the wall of gallbladder(a). Note the narrowed inner cavity of the artery. Stenotic luminal spaces of arteries revealed by elastic fiber stain (b&c). a, b, & c: 200×.

MFN was usually found in the skin-related diseases [7,9,10,12] in patients with obesity [1], diabetes [1,8], or circulatory disturbance [15], but it was rarely found in the breast [2], lipoma [3], appendices epiploicae [4], and mature cystic teratoma of ovary [5]. MFN of the gallbladder has not yet been reported in the literature, though various kinds of chronic inflammation are extremely common in this organ.

In the present study, the pathological examination of a patient with marked chronic cholecystitis revealed peculiar MFN in subserosal fatty tissues of its wall accompanied by severe fibrosis and hemorrhage. Further, many macrophages and phagocytized MFN products were detected in the subserosal area. Generally, peripheral circulatory disturbances are thought to be the cause of MFN [1,3,4,8,9,15]. Although our patient did not have either diabetes or cutaneous lesions of collagen vascular diseases, we suspected some kinds of circulatory disturbance in its wall due to arteriosclerotic changes associated with marked fibrosis and hemorrhage. The involved fatty tissues became ischemic and induced MFN. These degenerated fatty tissues were recognized as foreign body because there was a marked change in the tissue characteristics due to ischemia. MFN induced macrophage aggregation, and it was subsequently phagocytized into the cytoplasm and retained in multinucleated giant cells as a foreign body. These phagocytized MFN might be digested in different ways, depending on each MFN.

With regard to the staining characteristics of MFN in the present case, the results of D-PAS [3,13], SBB [3,10,12], LFB [10], and prolonged Z-N [3,4] staining were positive for MFN, and immunohistochemistry of CD68 was clearly positive for multinucleated giant cells [13]. The results of the present case suggested that MFN was not like a ceroid, as reported previously [3,4,5], because it gave negative results with orcein, Victoria blue, and Schmorl stains. MFN might be heterogeneous because the nature of degeneration or denaturation might differ in each case. However, MFN was positive at least for SBB, LFB, and prolonged Z-N as observed in our case.

In keeping with these findings, the real cause of phagocytizing is unclear. Phagocytosis of a similar nature has been observed in sclerosing lipogranuloma of scrotum or perineal region [12,13], and in these cases, MFN was phagocytized by macrophages like in our case. However, MFN was not phagocytized in some cases [8]. Thus far, to our best knowledge, there has been no report on MFN of gallbladder in the literature. Further investigation is needed to identify the precise reasons of the rarity of MFN in gallbladder.

The authors are grateful to Mrs. Y. Matsuka, Ms. W. Tanihata, and Mrs. M. Izumimoto for their technical assistance and to Ms. K. Matsushita and Ms. K. Takasuka for their secretarial assistance.