Congenital Klippel-Trenaunay syndrome (KTS) is a sporadic, complex vascular malformation, which commonly presents with wine-colored spots on the skin, soft tissue and bone hypertrophy, and superficial varicose veins. KTS associated with vascular abnormalities in the central nervous system is not commonly seen in clinical practice. Here, we report on a case of KTS accompanied by intracephalic vascular malformations which led to cerebral hemorrhage.

The patient was a 15-year-old male who had had a paroxysmal headache for six years. This study was conducted in accordance with the Declaration of Helsinki and received approval from the Ethics Committee of our Hospital. Written informed consent was obtained from the patient. The patient was admitted due to the presence of a serious headache for more than 10 days. The neurological examination revealed that the patient was physiognomically sluggish and unresponsive. A general examination revealed that the right upper arm and the left lower leg of the patient exhibited hemihypertrophy and wine-colored spots (Figure 1). According to the details given by his parents, the symptoms gradually became worse as the patient got older, and the patient had previously undergone a hemangioma resection of the tongue at seven years of age. This patient had no family history of disease. The parents were non-consanguineous, and examinations during pregnancy had shown no fetal abnormalities. Laboratory tests also indicated no abnormalities. Auxiliary electrocardiogram (ECG) revealed that the size of the heart and the diameters of various vessels were normal. The systolic function of the left ventricle was normal, and no pathologic reflux was seen in any of the valves. An abdominal ultrasound showed that the liver, bile, pancreas, spleen and kidneys were normal. A brain computed tomography (CT) scan showed that the left cerebellar hemisphere and the left temporo-occipital lobe had multiple clumpy patches of high density shadows, with larger shadows seen in the left cerebellum and an area of low-density edema surrounding it. The right transverse sinus and the sigmoid sinus were dilated, with dilation of the sigmoid sinus more obvious than that of the transverse sinus. Moreover, the density was also slightly increased in the sigmoid sinus. Brain magnetic resonance imaging (MRI) revealed that the right straight sinus and the sigmoid sinus were dilated. A brain magnetic resonance angiogram (MRA) revealed large areas of patchy, high signal shadows on the right straight sinus (Figure 2). Since the hematoma was located in the posterior fossa and the patient’s symptoms were mild, the patient received conventional treatment with medication instead of surgery, after which the symptoms dissipated significantly. Three weeks later, a brain CT showed that the hematoma had faded and was partially absorbed, and the patient felt well. Two months after this the patient lost consciousness suddenly, and a CT scan showed a large hematoma. Thirty minutes after the scan, the patient stopped breathing and died. 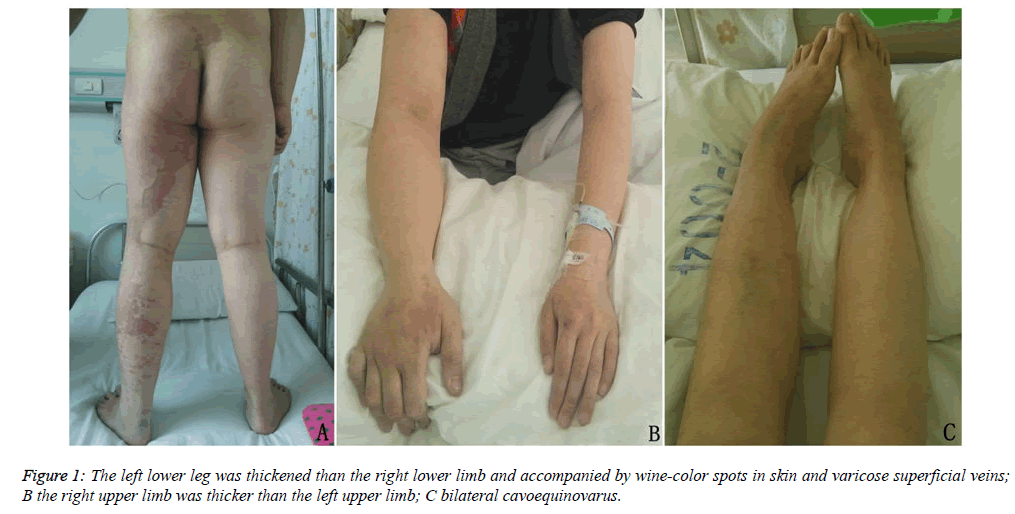 Figure 1: The left lower leg was thickened than the right lower limb and accompanied by wine-color spots in skin and varicose superficial veins; B the right upper limb was thicker than the left upper limb; C bilateral cavoequinovarus.

KTS is an abnormality that occurs in children and adolescents. It was first co-discovered and reported by the French physicians Klippel and Trenaunay in 1900 [1], thus, the disease was named after these two doctors. Originally it was considered to be a rare congenital disease. However, in 1985, Servell [2] reported on 768 cases handled by him, indicating that the disease is not rare. Nevertheless, this did not attract much attention at that time. There have been no exact statistics reporting the incidence of this disease. According to Xu in 1988, KTS accounted for about 1.6% of vascular diseases at that time. More than a century after its first description, there is a now a better understanding of KTS. It is now known to be a complicated venous malformation with the following clinical triad of features: (l) capillary malformation, normally occurring as vascular naevi or vascular tumors, and the appearance of wine-color spots; (2) soft tissue and bone hypertrophy, usually occurring in the lower extremities and presenting as thickened and excessively long limbs; (3) superficial varicose veins, which mostly occur unilaterally. Gloviczki et al. suggested that two of the triad of features need to be present for the diagnosis of KTS [3].

KTS is a vascular malformation which affects the capillaries, veins and lymphatic tubes, but has no significant arteriovenous shunt. Currently, the cause of KTS is unclear. Young et al. proposed that it may be caused by the abnormal development of the mesoderm at an early embryonic stage [4]. This view has also been accepted by most scholars. Young suggested that during the embryonic developmental period of patients with KTS, a delayed degradation of embryonic blood vessels occurs in the dorsal or ischial venous systems, which should close in the second month of fetal development. This results in these systems remaining open, and the eventual formation of a significant varicose vein after birth, the so called Klippel- Trenaunay vein (KT vein). Since KTS involves the abnormal development of the mesoderm, in addition to the typical triad of clinical features KTS might also be complicated by the co-occurrence of other congenital diseases, such as ankylodactyly, polydactyly, cavoequinovarus, spina bifida, hypospadias, visceral vascular malformations such as multiple colonic hemangioma, hemifacial hypertrophy, etc. If the lymphatic system is involved, lymphatic edema and cysts can occur, as well as chylothorax and chylous ascites. The patient reported on here presented with cavoequinovarus. In clinical reports, KTS is most commonly associated with visceral vascular malformations, and is rarely found to be associated with intracranial vascular malformations. In 1994, Makiyama et al. reported on one case of a child with intracephalic vascular malformation and damage causing cerebral hemorrhage [5]. Surgical resection was performed in this patient, who was subsequently pathologically diagnosed with an arteriovenous malformation (AVM). In 1986, Jaksch et al. [6] reported on a case of a large AVM causing cerebral hemorrhage; however, surgery was not used in the treatment of that patient. As for the case reported here, MRI showed that the right sigmoid sinus and straight sinus were dilated, so the diagnosis was venous malformation. As the patient’s symptoms were mild, and the condition of blood vessels in other areas was not clear, an invasive digital subtraction angiography (DSA) was not performed in this patient. While clinical cases of KTS with cerebral vascular abnormalities is rarely reported [7], the autopsies of patients with KTS commonly report vascular abnormalities in the diencephalon, the medulla oblongata, and the cerebellum, amongst other regions [8].